Introduction: Obesity is becoming a serious Global Public Health issue especially in developed countries. Evidence indicates that obesity is associated with wide range of health conditions including respiratory diseases can result in altered respiratory function. Yoga is a form of physical activity which may assist in achieving recommended levels of physical fitness. Yoga may be atractive as an aerobic training program because it requires little space and no equipment. Some yoga postures helps to reduce weight with significant health benefits.

Materials and methods: Prospective comparative cross sectional study was conducted in Rural Community. Total 60 subjects male and females diagnosed with Obesity from medicine dept. PMT, Loni.by the WHO criteria. Out of sixty thirty subjects were divided into two groups by block random sampling method that is group I and II. After explaining procedure both groups were revaluated for baseline parameters like B.M.I. and pulmonary functions. (MVV, FEV1/FVC) group I started with aerobic exercise that is walking and Group II started with pranayama & postures of yoga that can help to reduce weight.

Conclusion: Our study concludes that regular practice of yoga is really helpful in weight reduction & improves the pulmonary functions.

Obesity is becoming a serious Global Public Health Issue especially in developed countries. A growing body of evidence indicates that obesity is associated with wide range of health conditions including respiratory diseases such as COPD and asthma. It can cause serious health problems that are indisputable. Some studies has suggested that obese people are more prone to cardiac ailments. Also obesity can affect the thorax, the diaphragm, and the abdominal muscles. And due to increased respiratory effort result in altered respiratory function, even if the lungs are normal. It can also cause hyper tonicity in the abdominal muscles, impairing the diaphragmatic activity dependent on respiratory function. Studies of obese individuals not diagnosed with other diseases have suggested that pulmonary and chest wall compliance was reduced due to fat deposition in the chest and the abdomen thereby causing decreased elasticity and reduced dispensability of extra pulmonary structures [1-3].

Nowadays, obesity is the worrying factor due to sedentary lifestyle and bad eating habits. Dietary and lifestyle practices are directly related to obesity, the most important cause in imbalance between the energy intake and output. It is determined by measuring body weight and fat, but BMI (Body Mass Index) is one of the best methods to calculate obesity (Table 1).

Table 1: WHO values for diagnosis of obesity according to BMI.

Public Health initiatives are calling for increased awareness of the problems associated with obesity among the general public and for identifying mechanism for reducing obesity. Physical activity conveys multiple and well established health benefits [4].

Yoga is a form of physical activity which may assist in achieving recommended levels of physical activity. Yoga is increasing in popularity with recent records suggest that 15 million Americans have practiced yoga at least once in their lifetime. Yoga may be attractive as an alternative to traditional aerobics and strength training program because it requires little space and virtually no equipment, limited or no harmful side effects and with its focus on relaxation of mind and body. It provides qualitatively different exercise experience which may be perceived as less strenuous and more pleasurable. It does not cost a money to reduce weight .There are no side effects. Weight loss is accompanied by proper conditioning of body. One can lose weight and feel better also as yoga rejuvenates the body. Yoga helps to bring the mind-body connection. Which can improve self-image and acceptance of your body? Most importantly, yoga can help the person feel better, both improving the physical fitness and elevating mood. Yoga has considered all aspects of obesity like physical, emotional and mental. Regular practice of Yoga and Yoga has different effect on obesity, which is permanent in nature than other techniques for obesity reduction.

Given these characteristics of yoga. It gives satisfaction to many of the conditions which have been shown to be strongly related to participation in physical activity such as low perceived barrier to participation, being enjoyable and having low to moderate intensity. There are many studies conducted on yoga for various conditions that gives significant health benefits Although yoga can be one of the most accessible and beneficial forms of exercise [6-8].

1. To compare the effect of yoga and aerobics on obesity reduction.

2. To determine the effect of yoga and aerobics on Pulmonary Function.

2. Subjects with overweight, grade I & II obesity calculated by Body mass index (BMI) By WHO criteria.

A prospective experimental comparative study was conducted in rural community.

This study was conducted in College of Physiotherapy, PIMS Loni. The data was collected during the period of 1 year (i.e. from Jan .2011 – Dec. 2011).60 adults including males and females in the age group of 30 – 50 years were selected randomly by block method for the study, and divided in to two groups- Group I and Group II.

Study procedure explained to each participant according to group that is about arobic exercises to group I. And yoga postures explained and demonstrated to group II.

Group I was given aerobic exercise (walking) 45 min to one hour daily. Including warm up and cool down for five days in a week.

Group II subjects were taught pranayama, sun salutations and yoga postures (asanas) which helps to reduce weight in standing, sitting, lying, 45 min. to one hour daily for five days in a week.

Follow up was done for both groups after every month.

After one year all the parameters were rechecked i.e. weight, Body Mass Index (BMI), and Pulmonary functions (PFT).

Table 3: Shows pre and post values of ratio FEV1/FVC in both groups.

Table 4: Pre and post value of MVV in both groups.

Table 5: Pre and post value of BMI in both groups. 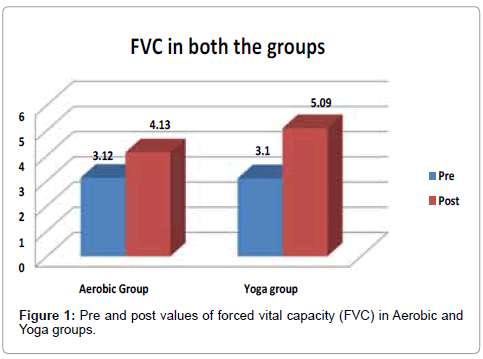 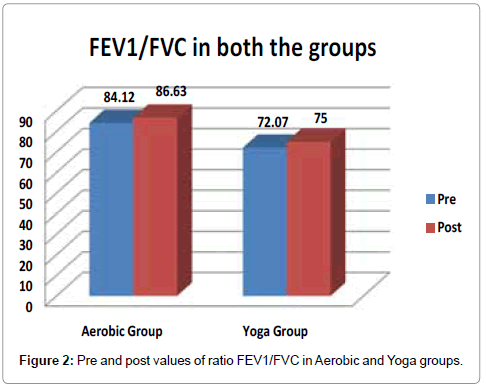 Figure 2: Pre and post values of ratio FEV1/FVC in Aerobic and Yoga groups. 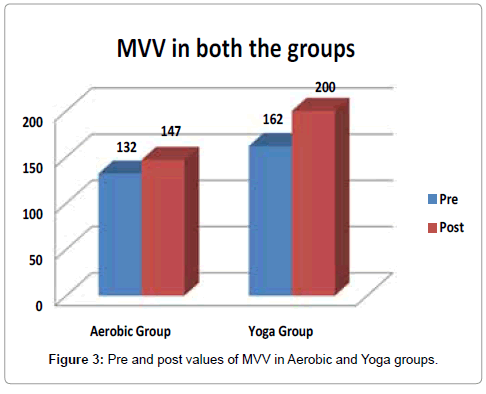 Figure 3: Pre and post values of MVV in Aerobic and Yoga groups. 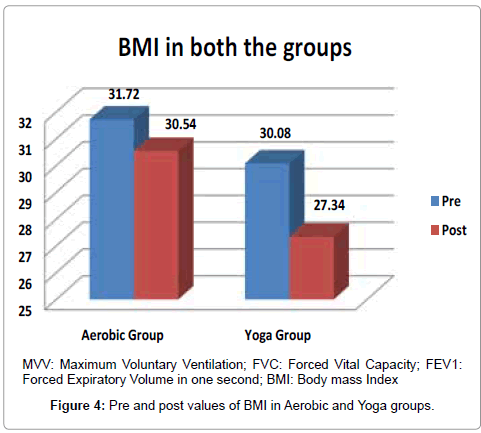 Figure 4: Pre and post values of BMI in Aerobic and Yoga groups.

The findings in this study indicate that there was significant improvement in all the parameters those subject participated in yoga group than aerobics group.

The results of this study suggest that obese subjects who participated in yoga group show more improvement in pulmonary functions and reduce BMI compared to subjects who participated in aerobic group. This could be due to the effect of yoga postures that involves physical and mental components. This is partly in accordance with various studies, increased flexibility and relaxation. Surprisingly doing yoga it is possible to burn fat, boost the metabolism and give all other benefits to improve health. Fat burning postures explains that the backwardbending postures elevate the heart rate. Twisting postures stimulate the adrenal glands and flush out toxins [7,8].

When people think of yoga, they think of its wonderful benefits like mind and body connection, increased flexibility and relaxation. When doing yoga it gives the quick effect on body. That will get one’s heart into its target zone. Yoga can help to develop long strong muscles a flat stomach and a strong back along with improvement of posture [3,4].

Of course, these physical changes are depends on other lifestyle factors, such as a well-balanced diet and regular physical activity. Most of the studies have shown significant weight loss by regular yoga practice. One study found that after three months, healthy adults lost an average of 6kgs. For weight loss program, all obese participants reached and sustained a normal weight with continued practice of yoga within one year & showed improvement in pulmonary function [8].

Regular aerobic exercise and strength training are productive, but aren’t the complete answer. Yoga may be just the piece, need to complete the puzzle of keeping both the body and the mind fit. Yoga exercises are performed with very few, but extremely precise, repetitions in several planes of motion. In yoga, one focuses on breathing, and therein lies its healing. Breathing itself has extraordinary healing capacity on physical and emotional levels. Current research indicates pranayama the conscious breathing is more helpful to improve pulmonary function [9-14].

Yoga along with pranayama and sun salutations can be used as complementary or adjunctive intervention in obesity for reduces the weight and improvement in pulmonary function [15-20].

Future Research needed on yoga and an aerobic exercise with large sample .Not many people are aware of these simple exercises. There are hardly any studies on comparison of yoga and aerobics .More research needed to validate its effects. But it may be worthwhile to add this exercise in our daily routine.

Copyright: © 2013 Shinde N, et al. This is an open-access article distributed under the terms of the Creative Commons Attribution License, which permits unrestricted use, distribution, and reproduction in any medium, provided the original author and source are credited. 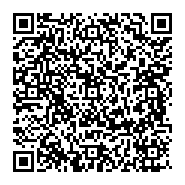