A Robotic Monofilament Test for Diabetic Neuropathy: From Bench to Clinic

Methods: 116 consecutive patients with Type II diabetes were included. The examiner conducted the RMI, VP, TC, and SW test without knowledge of patients’ lower-extremity symptoms and blinded from the patients’ perception. The performance of each test was analyzed by generating ROC curves for the detection diabetic neuropathy. The area under the curve (AUC), sensitivity, specificity, positive predictive value (PPV), and negative predictive value (NPV) were determined by logistic regression analysis with adjustment for underlying disease.

Multidisciplinary diabetic care, especially preventive foot care has been accepted as an effective approach to reduce complications and cost of treatment in diabetic patients [1]. Peripheral neuropathy is one of the severe complications in diabetic patients and associated with severe morbidity including diabetic foot ulcers, infection, and amputation [2]. The neuropathic ulceration can be reduced by screening examination at the first outpatient visit and yearly thereafter. Patient who is at risk of neuropathic ulceration must receive appropriate foot care education and treatment of foot problems in order to prevent future ulceration, infection, or amputation. 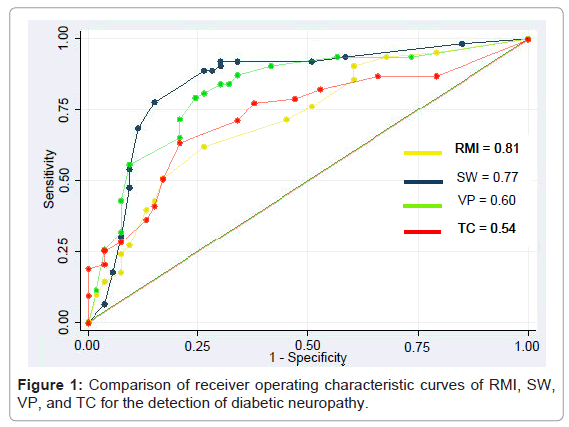 Figure 1: Comparison of receiver operating characteristic curves of RMI, SW, VP, and TC for the detection of diabetic neuropathy.

The subjects included 116 consecutive patients with Type II diabetes. They were excluded from the study if they were diagnosed as having other cause of neuropathy such as toxic exposure, alcoholism, liver or renal diseases. Age, sex, duration of diabetes, blood glucose, glycerated hemoglobin (HbA1c), routine biochemical and homological test, history of foot ulcer and complications were recorded. The examiner conducted the robotic monofilament inspector test (RMI), vibration perception test (VP), Toronto Clinical Scoring test (TC), and manual Semmes-Weinstein monofilament test (SW) without knowledge of patients’ lower-extremity symptoms and blinded from the patients’ perception.

The development of RMI was reported by our group [5]. The sites tested were the plantar aspect of great toe (site I), first metatarsal (site II), and fifth metatarsal (site III). Each site was randomly assessed three times and analyzed by computer software from ARM7 microcontroller (Analog Device Inc, Norwood, MA, USA) in the control box.

The light touch pressure perception was assessed manually using 5.47/10 g monofilament [6] at three non-callused sites as described in RMI. The examinations were done three times at each point with at least one fake examination and the participants were blinded to the application during the testing.

Patients were assessed by applied perpendiculary [7] on both sides of lower limb lateral condyles using C64 quantitative tunning fork (Tanako Manufacturing, Nagoya, Japan). The first lost vibration sensation was recorded, and vibration disappearance threshold was estimated as the intersection of two virtual triangles. An average of threshold C4 was recorded as abdominal.

The Toronto Clinical Score System [8] was evaluated in all patients and the examiner was blinded to the results of other tests. The TC rated individual symptoms as absent or present and graded the presence with sense of well-being and/or activities of daily life. Each 8 sign was rated as normal or abnormal at toes, between toes and ankle, or above ankle.

Total direct medical cost of RMI, VP, TC, and SW were estimated for each patient. The average cost of treatment and incremental costeffectiveness ratio were analyzed by using TC as baseline comparison.

Continuous data were summarized as mean (SD) or median (range) as appropriate, whereas categorical data were summarized as counts and percentage. The unpaired t test or Wilcoxon rank-sum test was used to determine the differences between independent groups in terms of continuous outcomes, while the χ2 test was used to determine categorical outcomes. The performance of each test was analyzed by generating ROC curves for the detection of diabetic neuropathy. The area under the curve (AUC), sensitivity, specificity, positive predictive value (PPV), and negative predictive value (NPV) were determined by logistic regression analysis with adjustment for underlying disease, e.g., hypertension, HbA1c level, and presence or absence of diabetic foot ulcer. Statistical significance was defined at a p-value of 0.05 or less. Statistical software version 9 (StataCorp, College Station, TX, USA) was used for all statistical analyses.

*According to consensus of the American association of neuropathy [11]

*According to consensus of the American association of neuropathy [11]

Table 2: Prevalence of diabetic neuropathy detected by each test.

Table 3: Area under ROC curve, sensitivity, specificity, PPV, and NPV of each test.

Diabetic neuropathy is a serious complication that affects quality of life and associated with lower limb amputation. Early detection and prevention of subclinical symptoms is essential to reduce the disability, improve quality of live and economic outcome of patients. SW test is a screening method recommended for detecting the loss of protective sensation in diabetic foot. However, variations in the use of monofilament lead to significant difference in sensitivity and specificity of test which is affected by the workload and requirement of medical personnel. The RMI was developed inter-examiner variations in order to improve the accuracy of detecting the diabetic neuropathy by reducing the inter-examiner variation time and labor incurring to patients. In this study, we found that the RMI had highest sensitivity and best overall performance in detecting diabetic neuropathy [9].

The simple concept of SW test by calibrating the sensation of buckle has made it popular for the screening of diabetic neuropathy. However, the variation in force, operational dependence, time and workload has led to significant difference in prevalence of diabetic neuropathy. The magnitude of benefit of RMI is better when compared to the performance of SW test. VP test is useful to detect the early abnormality of diabetic foot sensation [10]. It is easy, objective and associated with diabetic retinopathy. The sensitivity of VP test in this study was 77.78% with the AUC under ROC curve of 0.60 which had acceptable performance. Our previous study [5] showed that VP test had good agreement with RMI (KAPPA statistic=0.94 ± 0.12) and SW (KAPPA statistic=0.76 ± 0.12).

The major limitation in this study is the general liability of this instrument while it requires some training to operate the system. A simplify set up will increase the acceptability among the health care personnel. Our preliminary experience with RMI is simple to implement which is highly reproducible by design (Figure 2). Several studies have demonstrated the capability of diabetic foot screening for neuropathy and foot care in reducing the burden from diabetic foot complication. Difference screening tests result in difference detection prevalence even in the same group of patients. The RMI may be used as a reliable tool in the screening of diabetic neuropathy.

The authors thank Professor Dr. Amnuay Thithapandha helping with the English editing of this manuscript. This study was approved by the Ethics Committee.

Copyright: © 2012 Wilasrusmee C, et al. This is an open-access article distributed under the terms of the Creative Commons Attribution License, which permits unrestricted use, distribution, and reproduction in any medium, provided the original author and source are credited.