Adiponectin, IL-6 and hsCRP: Interplay of Inflammation with Obesity and Type 2 Diabetes in Indian Population

Inflammation plays a significant role in human health [1]. Optimal level of inflammation is required for immunity enhancement while chronic inflammation is associated with several metabolic disorders like type 2 diabetes, obesity, cardiovascular disease, etc. Though inflammation and type 2 diabetes are directly associated, the cause and effect is not well defined. Several reports have indicated that the progression and severity of the metabolic disorders are well correlated with increased level of inflammatory parameters [2]. It may be hypothesized that in healthy population, change in proinflammatory markers should be compensated by altered antiinflammatory markers; any deviation from this profile would lead to systemic disorder. The important regulators in this context of metabolic disorders are adiponectin, IL-6 and hsCRP. Adiponectin is a 244 amino acid long protein that is secreted from adipocytes with anti-inflammatory and insulin-sensitizing property [3]. The other members are pro-inflammatory cytokines IL-6 and hsCRP which are known to be elevated in diabetes. These markers though well understood in terms of their regulation in diabetes population are still lacking acceptance as clinical markers due to the variation of levels among various ethnic groups [4]. In recent times, the numbers of diabetic and obese people has increased significantly in developing and emerging countries like India and China. Various metagenomic studies indicated the association of common gene variants encoding adipokines and inflammatory markers with adiposity in Asian Indian and role of truncal obesity accounting for the 2-fold excess incidence of diabetes in Asian Indians [5,6]. In this study, we focused on the importance of inflammation on type 2 diabetes and investigated its association with adiponectin and obesity, we highlighted the role of inflammatory regulators hsCRP and IL-6 with adiponectin in type 2 diabetes and obesity in Indian population.

The study was carried out in the Departments of Biochemistry and Medicine at University College of Medical Sciences and GTB Hospital, Delhi for a period of 18 months. Diagnosis of type 2 diabetes was based on Revised American Diabetes Association (ADA) guidelines [7]. The cohort consisted of 88 volunteers aged between 30-60 years of either sex and of Indian origin. They were divided into four groups: (Group-1)-obese diabetic, (Group-2)-nonobese diabetic, (Group-3)-obese non-diabetic and (Group-4)-healthy control. Patients with any history of acute or chronic infections, auto immune disorders, liver disease, pregnant and lactating females were excluded from the study. Informed consent was obtained from each participant before initiation of the study. The study was cleared by the institutional ethical committee. Age, sex, family history and physical examination including height and weight measurements and the Body Mass Index (BMI) was calculated using the formula weight (kg) divided by height in meters squared, have been systematically recorded in a pre-designed Performa. A detailed clinical history had been obtained after biochemical investigation to rule out any disease other than diabetes. Estimation of plasma glucose fasting and post prandial (2 hours after meals) was done by the glucose oxidase method [8]. Glycosylated haemoglobin (HbA1C) was determined by Ion-Exchange Chromatography using kits from Crest Biosystem (INDIA) [9]. The Liver function tests: total proteins, glutamate pyruvate transaminase, alkaline phosphatase were estimated using automated analyser [10]. Lipid profile-total serum cholesterol, triglycerides, HDL, LDL, VLDL cholesterol were also measured using automated analyser [11]. Serum Insulin was estimated by ELISA method using standard Kit (UBI MAGIWEL) [12]. The inflammatory markers-estimation of serum hsCRP levels and IL-6 was done by ELISA, method using standard Kit (Cal Biotech USA) [13,14]. Serum adiponectin was estimated by ELISA method using standard Kit (Bio Vendor) [15]. Statistical analysis was performed using the two-way analysis of variance (ANOVA). Data were expressed as mean ± Standard deviation, p<0.01 was considered statistically significant.

Table 1: Clinical and biochemical characteristics of the study groups.

Table 2: Comparision of the biomarkers levels in study groups.

Valves are expressed as Pearson’s correlation Co-efficient (r value) n=22. No significant correlation was seen among the parameters 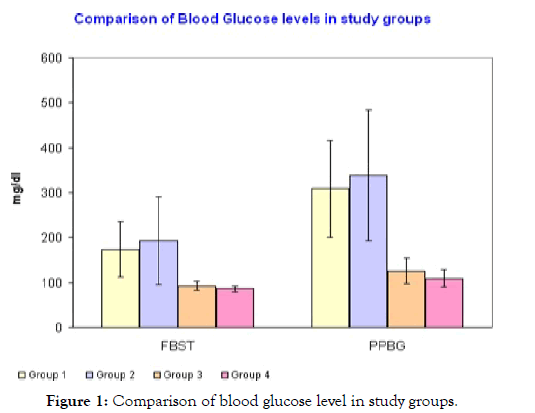 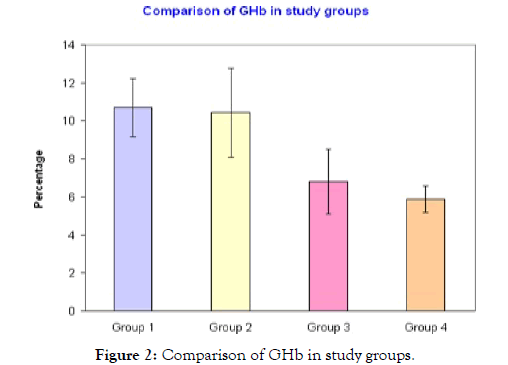 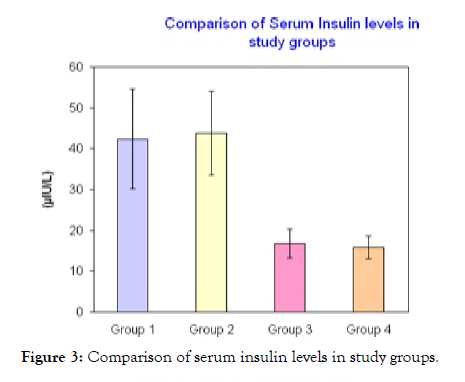 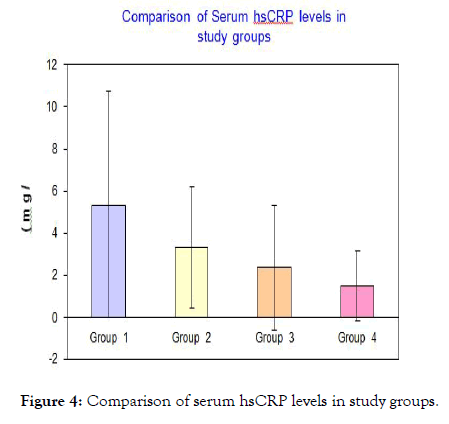 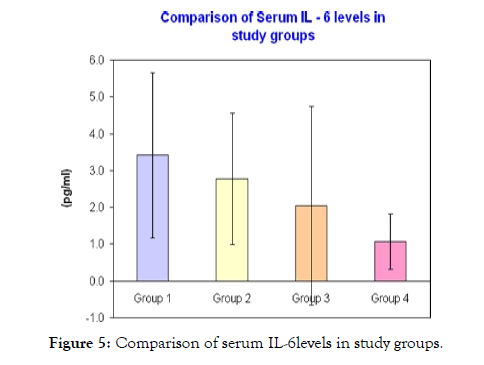 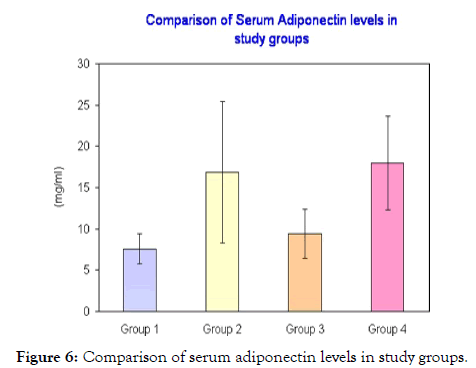 A consistent association of BMI and upper body adiposity with diabetes has been shown in the Indians population. A minimal rise in the BMI could act adversely with the genetic susceptibility to diabetes. For Asians BMI>3 is considered overweight and >25 are obese [17]. In the study, we have taken a group non-obese diabetic, where the subjects are diabetic but not obese and had significantly lower BMI. Although most patients with type 2 diabetes mellitus are obese and obesity itself causes some degree of insulin resistance, patients of type 2 diabetes mellitus but are not obese by the traditional weight criteria may have increased percentage of body fat distributed predominantly in the abdominal region [18]. Obesity is often associated with insulin resistance and a cluster of metabolic disturbance, our study showed significantly lower levels of serum insulin in obese non-diabetic. This can probably be explained by the existence of a subgroup of healthy but obese individuals [19]. It is however unclear why some obese individuals fail to show traditional risk factors associated with the insulin resistance syndrome despite having a very high accumulation of body fat [20]. In the 1980’s the existence of a Metabolically Healthy but Obese individuals (MHO) was postulated. Subsequent studies confirmed the existence of a subgroup of obese individuals with relatively high levels of insulin sensitivity and a favourable metabolic profile. Numerous studies suggest that the amount of visceral fat is an important factor associated with variation in insulin sensitivity [21]. It has been observed that there is a 50% lower accumulation of visceral adipose tissue in metabolically healthy obese as compared to metabolically abnormal group. There is also good evidence that the difference in the body fat distribution plays a part [22]. Several studies have shown that obese people with an abdominal pattern of fat accumulation are more likely to have prediabetic abnormalities such as insulin resistance, hyperinsulinemia and glucose intolerance than those with a more femero-gluteal pattern [23]. Studies have shown that difference in adipose tissue cellularity also plays a role, people who become obese primarily through an increase in fat cell size (hypertrophic obesity) are more likely to develop obesity related metabolic disorders than those in whom the increase in adiposity is primarily mediated by an increase in fat cell number (hyper plastic obesity) [24]. Clinically, hypo-adiponectinaemia was observed in patients with obesity, diabetes, and coronary artery disease. The obese non-diabetic group in spite of being non-diabetic has lower value of adiponectin, which can be explained as occurrence due to the obesity status. A number of clinical studies showed a decrease of adiponectin levels in obese humans in relative to lean subjects. For example, Arita et al. found a negative correlation between BMI and plasma adiponectin levels in Japanese men and women this was further supported by studies of Weyer et al. performed on Caucasian and Pima Indian Population [25,26]. It is possible that adiponectin concentration may be convenient marker for identifying subjects with the metabolic syndrome who may later progress to impaired glucose tolerance.

Studies by Upadhyaya et al. in their study to identify the association of inflammatory markers (adiponectin and IL-6) with fasting glucose in normoglycemic, prediabetic and hyperglycaemic people in Indian population showed that there was a significant but gradual change in both adiponectin i.e., reduction and IL-6 increased levels in normoglycemic, prediabetic and hyperglycaemic population during the progression of healthy toward diabetic population via pre-diabetic condition [27].

Considering that obesity is intimately related to insulin resistance, and that some markers of inflammation are secreted at least in part by adipose tissue or influence adipose tissue physiology the possibility exists that instead of being related to insulin resistance, the concentration of serum markers of inflammation could also depend on obesity-this is in explanation to the study finding that in obese non-diabetic subjects, the values of proinflammatory markers hsCRP and IL-6 are increased [33]. Obesity mediated cytokine production is therefore an important control mechanism for systemic elevation of both these biomarkers. The primary cytokine involved in hepatic CRP synthesis is IL-6, also an important adipocyte-signaling molecule released from visceral and subcutaneous fat stores. Indeed, approximately 25% of in-vivo systemic IL-6 originates from subcutaneous adipose tissue and is thought to modify adipocyte glucose and lipid metabolism with body weight [34]. Furthermore, omental fat cells have been shown to secrete as much as 2 to 3 times more IL-6 in-vitro than cell derived from subcutaneous stores, an intriguing finding as venous drainage from omental fat provides direct access to the portal system, and abdominal adiposity hence is linked to insulin resistance [35]. Adiponectin has been shown to down regulate inflammatory response in-vitro as has been reported by Quchi et al. [36] which is suggestive of the fact that obesity induces insulin resistance and inflammatory cytokines are secreted by adipose tissues, though it difficult to evaluate if the relationship between serum markers of inflammation and insulin resistance result either from pathophysiological link or is merely reflecting the stronger relationship between obesity and insulin resistance [37]. As is seen in the present study, adiponectin an adipocytokine secreted by adipose tissue and known to be protective against diabetes is inversely correlated with IL-6 in obese diabetic, in non-obese diabetic adiponectin negatively correlated with hsCRP. In both groups, obesity is the common factor where there is an inverse correlation between adiponectin and inflammatory cytokines hsCRP and IL-6. Interestingly, in non-obese diabetic, adiponectin showed negative correlation with both hsCRP and IL-6, suggesting that the diabetic condition might have led to the increase in the inflammatory cytokines which is lineage with earlier findings.

There was a preliminary study done in North Indian population. The study would have made a better impact if other anthropometric measurements such as waist to hip ratio and waist circumference were measured for assessment of obesity also gender differences could have been considered. Moreover, it is known that the High Molecular Weight (HMW) is the more physiologically active form of adiponectin, in the present study total adiponectin was measured.

There are no conflicts of interest.

Copyright: Â© 2019 Zohmangaihi D, et al. This is an open-access article distributed under the terms of the Creative Commons Attribution License, which permits unrestricted use, distribution, and reproduction in any medium, provided the original author and source are credited.