Are Dyslipidemia Following Obesity and Hyperglycemia as an Indicator of Diabetes Involved in Dental Caries Development in Zucker Rats?

Eight ZF, 6 ZDF, and 7 Lean male rats were studied. We macroscopically examined the mandibular and maxillary molars and evaluated soft X-ray photographs for caries development. From each group, 5 mandibles and maxillae were examined histologically.

The ZF rats’ average body weight was more than twice that of the other 2 groups, but the ZDF and Lean rats had comparable body weights. The average triglyceride and total cholesterol levels were elevated in the ZF and ZDF rats, but the ZF rats’ average triglyceride and total cholesterol levels were three times and twice, respectively, those of the ZDF rats. The ZDF rats became diabetic after 13 weeks of age and demonstrated a high blood glucose level (>500 mg/dL) after 23 weeks of age. The ZF rats had a significantly higher blood glucose level than that of Lean rats after 23 weeks of age but had about one-half that of the ZDF rats. The ZDF rats had significantly more molar caries and greater alveolar bone resorption than the other two groups; the ZF rats’ caries and bone resorption were moderately higher than those of the Lean rats. Histopathologically, crown caries progressed to apical periodontitis in 20% and 50% of the ZF and ZDF rats’ molars, respectively, corresponding to the alveolar bone resorption on the soft X-ray film.

Dyslipidemia and hyperglycemia may involve dental caries development and obesity or diabetes could enable lesion progression to apical periodontitis in Zucker rats; diabetes enhances dental caries to a greater extent than obesity.

Meanwhile, numerous conflicting discussions have occurred regarding the causal relationship between dental caries and diabetes in humans because there are many influencing factors associated with dental caries, such as oral hygiene status, age, sex, or any combination of these [3-8]. However, we previously reported that the frequency and severity of dental caries were significantly higher in spontaneous or chemically induced diabetic animal models than those of nondiabetic animals of the same strain and indicated that diabetes is also an enhancing factor for dental caries [7,9].

Both obesity and diabetes are considered to be involved in the development of dental caries that are also characteristics of type 2 diabetes. In db/db mice, an animal model of type 2 diabetes was created and demonstrated that the frequency and severity of dental caries were increased compared with that of non-diabetic db/+ mice [10]. However, it remains unclear how obesity and diabetes influence dental caries development and to what extent each factor possesses caries-forming ability.

A Zucker diabetic fatty (ZDF) rat is a strain obtained by selectively mating individual obese Zucker fatty (ZF) rats that developed diabetes and was established as a type 2 diabetes model, which develops diabetes with obesity [11]. Thus, we hypothesized that dental caries would be exacerbated by the addition of the diabetic factor in ZDF rats that have both obesity and diabetes compared to that of obese ZF rats and performed a comparative analysis on the differences in dental lesions among Zucker strains.

The rats were handled according to the principles outlined in the Guide for the Care and Use of Laboratory Animals (Setsunan University, Osaka, Japan) and the Japanese Association for Laboratory Animal Science. Six obese or diabetic male ZDF rats aged 40 weeks, along with 8 age-matched ZF and 7 age-matched lean male Zucker (Lean) rats, were used and supplied by Charles River Laboratories Japan, Inc. (Yokohama, Japan). The study rats were housed in stainless steel cages in an air-conditioned animal room (20°C–26°C; relative humidity, 40%–70%) ventilated with filtered fresh air under a 12:12-h light-dark cycle. They were allowed free access to tap water and a widely used standard pellet diet that provided a far lower level of sugar than the established cariogenic diets [12].

Blood triglyceride and total cholesterol levels were measured using a commercial kit (Wako Pure Chemical Industries, Osaka, Japan). The blood glucose level was measured semi-quantitatively by the glucose oxidase method (Glutest Pro R, Sanwakagaku, Aichi, Japan). These were measured when the rats were 13, 23, and 33 weeks of age. Blood samples from the tail vein were collected in the afternoon between 1:00 pm and 4:00 pm.

The right mandible and maxilla of 5 rats from each group were fixed with 10% neutral buffered formalin for histopathological examination and were decalcified in a 5% solution of ethylenediaminetetraacetic acid 4 Na (EDTA 4 Na) for 2 weeks at 4°C after fixation. The fixed specimens were trimmed, dehydrated in a sequential ethanol series by an automated processor, and embedded in paraffin wax. Serial 7-μmthick mesial and distal tooth surface sections were made through the centers of all molars. These sections were stained with hematoxylin and eosin for examination.

The Wilcoxon rank-sum test was employed to compare the differences in the mean scores of the caries lesions and alveolar bone resorption by soft X-ray examination among the groups. The χ2 test was used to determine the incidence of histopathologic lesions, as determined by the histological examinations, in each group. A P value of less than 0.05 was regarded as statistically significant.

The Pearson’s correlations were used to examine the associations between molar caries and blood biochemical values (blood glucose, triglyceride, and total cholesterol).

The average blood glucose levels of the ZDF group exceeded 500 mg/dL at the final point and were significantly higher than those of the ZF and Lean groups at 23 and 33 weeks of age. The level of the ZF group was nearly in the middle of the other 2 strains, ZDF and Lean, and was significantly higher than that of the Lean group at 23 and 33 weeks of age (Figure 1d).

The macroscopic appearance and soft X-ray photographs of carious mandibular molars in representative cases are shown in Figure 2.

Table 1: Grading and incidence of molar caries in molars. 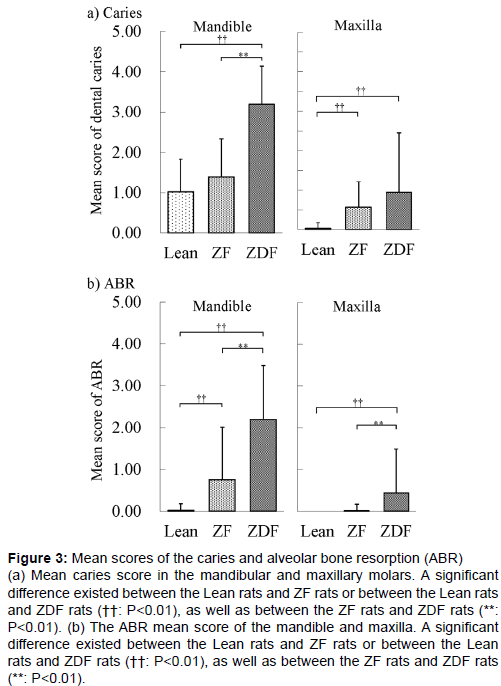 The present study reproduced the presence of dental caries in ZF rat strains, as in a previous report [2]. However, the intensity of the lesions was markedly lower than that of the ZDF group, despite the fact that these rats had obesity characteristics such as being overweight; furthermore, the subsequent dyslipidemia in the ZDF rats was markedly suppressed compared with that of the highly obese ZF strain. In humans, one cannot predict dental caries on the basis of only obesity, but the combination of obesity and an earlier caries experience are more sensitive predictors of future caries than that of an early caries experience alone in children [13]. In addition, normal weight children have significantly fewer dental caries in both their primary and permanent teeth than overweight children [14]. These facts suggest that obesity might contribute to dental caries development, but the cariesforming ability of obesity is weak.

Meanwhile, based on clinical observations, several recent studies suggested that diabetic patients’ teeth are predisposed to dental caries [4,5,15]. In experimental animals, our previous studies revealed that dental caries are induced in rodents with longstanding diabetes [7]. Furthermore, we reported that alloxan-induced severe hyperglycemia causes rapid-onset and progressive dental caries followed by apical periodontitis in non-obese rats, suggesting that diabetes could independently produce dental caries irrespective of obesity [9]. In the present study, the highly diabetic ZDF rats’ dental caries were considerably progressive and enhanced, irrespective of the fact that the rats were less obese compared with that of highly obese and mildly diabetic ZF rats. Thus, it is possible that diabetes possesses potent caries-forming ability and may play a major role in the progression of dental caries in Zucker strains.

The present study also demonstrated new facts including the following: crown caries had already developed in the Lean group, and the lesion progressed to apical periodontitis in the ZF and ZDF groups. Dental caries are not usually induced without cariogenic diets in any experimental animal models including rats, and the CRF-1 diet used in this study provided a lower sugar level that has not previously enhanced dental caries in general rat strains [12]. Therefore, it is likely that the Zucker Lean is a caries-susceptible strain, similar to that of the other diabetic animal models [7,10], and this characteristic might be exacerbated by combining the cariogenic effects of obesity and diabetes in the ZF and ZDF strains. It is also possible that mild hyperglycemia has an effect on the progression of dental caries in the obese ZF strain, but the accurate, independent cariogenic effects of obesity or diabetes still remain unknown in this study.

In conclusion, dyslipidemia and hyperglycemia may involve dental caries development, and obesity or diabetes could enable crown caries to progress to apical periodontitis in Zucker-strain rats. The effects on dental caries are unequal, and diabetes enhances dental caries to a greater extent than obesity.

We would like to thank Ms Michika Kawabe for creating the tissue samples and soft X-ray photographs and for assisting with the morphometrical analysis.

Copyright: © 2014 Kodama Y, et al. This is an open-access article distributed under the terms of the Creative Commons Attribution License, which permits unrestricted use, distribution, and reproduction in any medium, provided the original author and source are credited.