Background and objectives: Obesity is assuming an epidemic dimension globally. Currently more than 1.9 billion adults are overweight - and at least 600 million of them are obese. There is dearth of community based study on prevalence and predictors of obesity in Nigeria, and none from Abia state in particular, prompting us to undertake the study. Material and Methods: This was a cross-sectional study, aimed at ascertaining the prevalence and predictors of obesity in the state. The study subjects were recruited from the three senatorial zones in the state. In each of the zones, an urban and a rural community were randomly selected. The World Health Organization Stepwise Approach to Surveillance of chronic disease risk factors was used. Body mass index, anthropometric measurements, and other relevant data were also collected. Results: Overweight was present in 716 (28.2%) and obesity was present in 313 (12.3%) of the subjects. Ninety five (30.4%) of the obese subjects were men, while 281(69.7%) were women. One hundred and eighty (57.5%) of the obese subjects were urban dwellers, while 133 (42.4%) were rural dwellers. The women and urban dwellers were significantly more obese than men and rural dwellers respectively (p<0.001). Using multiple logistic regression analysis two variables predicted obesity in the study population. These were gender (OR=2.83, 95%CI 2.150-3.717, P=<0.001), and locality (OR=1.40, 95%CI 1.154-1.979, P=0.027). Conclusion: The prevalence of obesity in the state is significantly high and gender and locality are predictors of obesity in southeast Nigeria.

Obesity is a non-communicable disease. It is usually defined as body mass index (BMI) of 30kg/m2 or more [1]. Obesity is known to predispose to diseases like diabetes mellitus, dyslipidaemia, hypertension, osteoarthritis, coronary heart disease, obstructive sleep apnoea, stroke, and some cancers [2-4]. There is also an association between obesity and infectious diseases [5]. Increased consumption of more energy-dense, nutrient-poor foods with high levels of sugar and saturated fats, combined with reduced physical activity, have led to obesity rates that have risen three-fold or more since 1980 in many countries [6,7]. Obesity epidemic is occurring worldwide, and has been noted to be increasing at a faster rate in developing countries [7,8].

WHO reported in 2014, that more than 1.9 billion adults were overweight – and that at least 600 million of them were clinically obese [9]. The prevalence of overweight and obesity is highest in the WHO Regions of the Americas (62% for overweight in both sexes, and 26% for obesity) and lowest in the WHO Region for South East Asia (14% overweight in both sexes and 3% for obesity). In all WHO regions women are more likely to be obese than men. In the WHO regions for Africa, Eastern Mediterranean and South East Asia, women had roughly double the obesity prevalence of men [10].

In Nigeria, various studies had been carried out in different regions of the country on the prevalence of Obesity with variable results [11-13]. A systemic review of literatures in Nigeria showed that the prevalence of overweight in adult population ranged from 20.3%– 35.1%, while the prevalence of obesity ranged from 8.1%–22.2% [6]. However, there is dearth of data on predictors of obesity in Nigeria, and also most of the studies on obesity were hospital based with small sample sizes. The above lacuna and the fact that the Abia state ministry of health needs data on prevalence and predictors of obesity for better planning and interventions in the management of obesity in rural and urban communities in Abia state, prompted the state ministry of health to embark on this study.

This was a cross sectional study carried out in randomly selected urban and rural communities in Abia state southeast Nigeria. The study was a part of a state wide survey of non-communicable diseases and cardiovascular risk factors in Abia state, Nigeria (Figure 1). 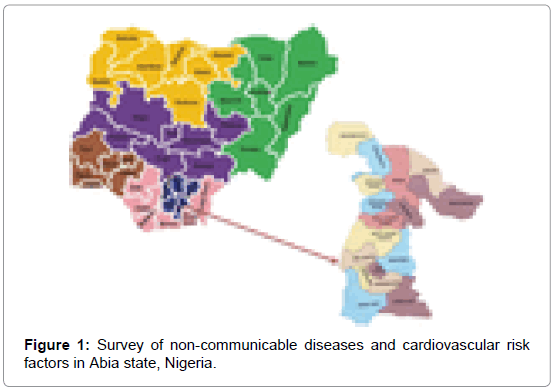 Abia state is divided into three senatorial zones, namely Abia North, Abia Central and Abia South. There are 17 loco l government areas (LGAs) in the state. The study population comprised of adults; 18 years old and above, whom were residing in the state. Individuals on transit or on temporary visits were excluded from the study. Pregnant women, women in puerperium (up to 6 weeks postdelivery), subjects with increased abdominal girth from organic causes were excluded from the study. The subjects were recruited by a three-stage random sampling method. The first stage of the sampling was simple random selection of six LGAs (one urban and one rural each) from the three senatorial zones. The second stage involved a simple random selection of four national census enumeration areas from each selected LGAs. The third stage was the random selection of two eligible respondents of both sexes from every household within the selected enumeration areas. Data was collected from the respondents with a pretested and validated modified version of WHO STEP 13 wise questionnaire, administered by trained research assistants. We adopted the WHO STEPS guideline (http://www.who.int/chp/steps/resources/ sampling/ en/) to calculate the appropriate and minimum sample size and the STEPS method to select a representative sample for the state. The level of confidence and the corresponding margin of error (MOE) used for the sample size calculation for the survey were 95% and 0.05 respectively. As there was no previous data on baseline levels of the indicators for the state, an estimated prevalence of 50% was used in order to ensure the most conservative sample size (n). Using the values obtained 1 and the population estimate for each 10-year age group by sex cluster for the population of the state (based on the 2006 population census), the estimated sample size was computed for each age and sex strata (n) The total 2 sample size was then adjusted for design effect (n) and 3 for expected non-response rate (n or final sample size). 4 The design effect of 1 was chosen (for random sampling) while the expected response rate was 80%.

Hence, the minimum calculated sample size for this study, making allowance for design effect, age-sex estimates as well as non-response rate was 2,880. However, of 2,999 subjects that were interviewed, 2,807 subjects with complete demographic and clinical data were included for analysis in this study.Ethical approval for the survey was obtained from the Abia State Ministry of Health Ethics Review Committee. Participation in the survey was voluntary and written consent was obtained from participants prior to enrolment after due explanation of the purpose, objectives, benefits and risks of the survey

BMI was classified with WHO classification as follows1; underweight BMI below 18.5 kg/m2, normal weight 18.5-24.9 kg/m2, overweight BMI 25-29.9 kg/m2. BMI of 30-34.9 kg/m2 defines class 1 obesity, BMI of 35-39.9 kg/m2 class 2 obesity, while BMI of 40 kg/m2 and above was used to define class 3 Obesity. Subjects having a systolic BP (SBP) 140 mmHg and above, or a diastolic BP (DBP) 90mmHg and above or who had a normal blood pressure but were treated for hypertension were categorized as hypertensives [14,15]. Definition of diabetes was based on history of diabetes or use of anti-diabetic agents (oral agents or insulin) as blood samples for diabetes was not taken.

Socio-demographic characteristics of the respondents

A total of 2999 respondents were visited, however, 2928 subjects granted interview giving a response rate of 97.6%. Nine hundred and fifty one of the respondents were from Abia north, 1057 from Abia central, and 991 from Abia south. One thousand, three hundred and seventy five of the subjects were urban dwellers; 689 (50.1%) men, and 686 (49.9%) women. In addition, 1553 of the subjects were rural dwellers, 710(45.7%) of the rural dwellers were men, while 843 (54.5%) were women. The percentage of urban and rural dwellers below the age of forty years was 59.8% and 48.7% respectively. Majority of the population were traders and artisans. Urban dwellers had higher income than rural dwellers (Table 1).

Table 1: Socio-demographic characteristics of the respondents by place of residence.

Table 2: Clinical Characteristics of the respondents by locality and gender.

Table 3: The results of your multivariate regression analysis. 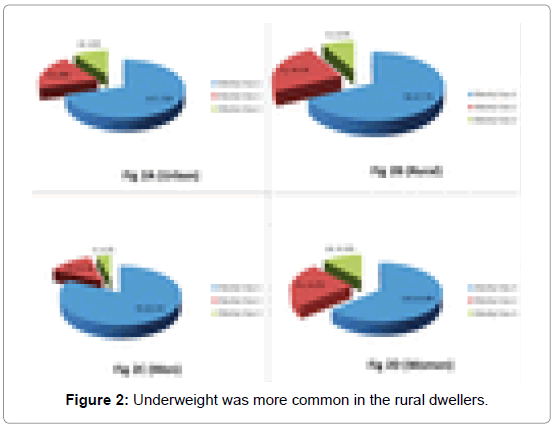 Figure 2: Underweight was more common in the rural dwellers.

Univariate binary logistic analysis was used to determine the relationship of obesity to other variables. Locality, gender, income, hypertension, and age were significantly associated with obesity. Using multiple logistic regression analysis two variables predicted obesity in the study population. These were gender (OR=2.83, 95%CI 2.150- 3.717, P=<0.001), and locality (OR=1.40, 95%CI 1.154-1.979, P=0.027).

The increasing prevalence of obesity in third world countries is a serious health concern because obesity is associated with many noncommunicable diseases including diabetes mellitus, cardiovascular diseases, stroke etc. These disease conditions contribute to increased morbidity and mortality in these countries and a drain on the their lean economy because of the cost of managing the associated co-morbidities [6]. There is therefore need to stem the trend by having appropriate community based data on obesity this will empower the government and other appropriate agencies to institute appropriate interventions.

The prevalence of obesity in women from the study was 69.6% while the prevalence in men was 30.4%. The prevalence rate in women was more than twice the prevalence rate in men. This finding is in keeping with World Health Organization report, which showed that worldwide women are usually more obese than men, and that in Africa, Eastern Mediterranean and South East Asia, women had roughly double the obesity prevalence of men [10]. The prevalence of obesity is also higher in women in many other studies on obesity [11-13]. The reason for higher prevalence in women in our region include the fact that in most homes, men are the bread winners and most are involved in physically engaging jobs (a form of exercise ) in other to make ends meet. A good majority of the women are house wives, and stay at home or run small petty business that involving sitting down and waiting for customers (sedentary life style). Women also cook food in most homes and have more access to food, than the men.

The prevalence of obesity was also more common in urban than rural area in our study. The reason for this may be due to the fact that those in the rural area do not have access to automobiles and do more trekking than those in the urban area. Trekking is a form of exercise. Those in urban area also have less space for exercising compared to those in the rural areas. In addition a majority of those in the rural areas almost all of them engage in farming, even when some of them have white collar jobs or are artisans. Farming is a physically engaging job. In addition urban dwellers consume more fast food than rural dwellers, and this fast food contribute to obesity [6]. The finding is in keeping with similar observation made in a study carried out in Nigeria [11,18].

There is dearth of studies on predictors of obesity in Nigeria. Locality, gender, income, hypertension, and age were significantly associated with obesity in this study. Adediran et al. [18] reported an association with little or no education, while Okafor et al. [11] reported an association with age. Using multiple logistic regression analysis two variables predicted obesity in the study population. These were gender, and locality. Midha et al. [19] in India reported age, gender and daily intake of saturated fatty acids as predictors of obesity in India.

This survey has shown that the overall prevalence of obesity in Abia state, southeast Nigeria is 12.3% that obesity is more common among women, and in those that live in urban areas. In addition it also showed that obesity is significantly associated with locality, gender, income, and hypertension, and it predictors are gender and locality.

There is need to educate the populace through the audio-visual media about healthy dietary habits and the importance of regular exercise to halt the trend. There is also need to create awareness about the cardiovascular and other complications of obesity. Although our study has identified two factors that contribute to obesity, there is need to examine this factors closely in future studies. Data generated from this study will also be used by the Abia state government subsequently in drawing up programmes to control obesity in the state.

We want to appreciate the Abia State Government of Nigeria for funding this programme through the Abia State Health system development project II. We thank My Adebayo Adewuyi for preparing the manuscript.

Copyright: © 2015 Chukwuonye II, et al. This is an open-access article distributed under the terms of the Creative Commons Attribution License, which permits unrestricted use, distribution, and reproduction in any medium, provided the original author and source are credited. 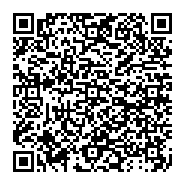