Combined central retinal vein and artery occlusion in one eye is a rare entity [1]. The reported cases were attributable to the reduction of the retinal artery and venous blood flow secondary to the underlying systemic risk factors, i.e., arteriosclerosis, hypertension, coagulation disturbances, mechanical vessels compression etc. The fundus changes of combined CRVO-CRAO are not easily distinguishable compared to isolated CRVO and CRAO. Most of the cases of combined CRVO and CRAO were assumed to occur either simultaneously or within a very short interval [1]. The pathophysiology of the disease is still not welldefined. In this case report, we are trying to illustrate a case of CRVO followed by CRAO with sequential fundus photo, and to describe the pathophysiology based on the anatomical basic.

A 73 year-old Indian gentleman with newly diagnosed diabetes mellitus came for diabetic eye screening and follow-up of primary open angle glaucoma. He is pseudophakic with visual acuity of 6/6, N6 on the right eye and 6/9, N8 on the left eye with mild cataract. He galaucoma was well- controlled on topical beta-blocker for both eyes. On examination, there was venous tortuosity and dilatation on the right eye with some retinal haemorrhages, raising the suspicion of impending CRVO (Figure 1). Aspirin 75 mg daily was started and systemic investigation for diabetic control, dyslipidaemia were performed. A month later, he came again with reduced vision of 6/36 in the right eye. There was no relative afferent pupillary defect and anterior segment examination was normal. Funduscopy showed flame-shaped haemorrhages in all four quadrants, with mild macula oedema and swollen optic disc on the right eye. The veins were tortuous and dilated, which confirmed the diagnosis of non-ischaemic CRVO (Figure 2). Investigations revealed good diabetic control and normal lipid and renal profiles. However, his blood pressure (BP) was persistently elevated, hence referral to physician for BP optimization was done. A month later, his vision further deteriorated to counting finger with positive RAPD. There was rubeosis irides with open angle. Arteriolar attenuation was noted at all retinal quadrants and the macula was severely oedematous (Figure 3). Delayed arterial filling on fluorescein angiography study confirmed the diagnosis of CRAO, with macula ischaemia. An antiglaucoma was started for the affected eye. Panretinal photocoagulation was initiated and delivered to all retinal quadrants at weekly interval. He also received monthly intravitreal injection of ranibizumab to improve the macula oedema. Echocardiography, electrocardiogram and carotid Doppler studies were all normal. The inflammatory markers was also normal and connective tissue screen was negative. On subsequent follow-up, the retinal haemorrhages and rubeosis irides had receded with laser treatment. His irido-corneal angle remained open, and IOP was in good control with two topical antiglaucoma. Despite eventual restoration of foveal architecture with intravitreal injection, his vision remained at 2/60 because of macula iscahemia. His retina was quiescent at the last follow-up (Figure 4), and his systemic co-morbidities were welloptimized. 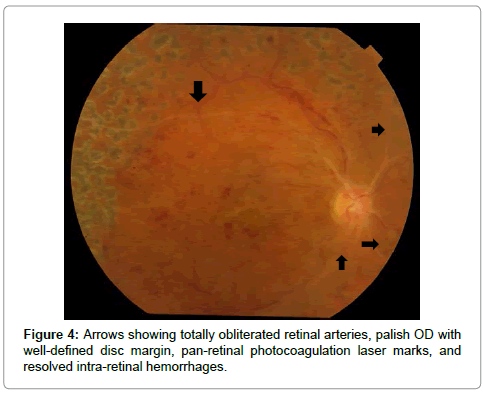 The fundus changes of combined CRVO-CRAO are distinguishable from isolated CRVO and CRAO. The clinical differentiation of isolated CRVO and CRAO is well established. The visual loss in CRVO patient is usually of slow progression and may range from a slight decrease in vision to profound visual loss, which s attributed by macula oedema and/or ischaemia. The typical fundus changes include hyperaemic swollen disc with blurred disc margin, dilated and tortuous retinal vein, and superficial retinal haemorrhages over the entire retina as seen in our patient.

CRAO is always associated with sudden loss of vision with pale retina and macula cherry red spot. The characteristic ophthalmoscopic appearance of combined CRVO-CRAO include OD swelling with blurred disc margin, peripapillary haemorrhages, intra-retinal haemorrhages, dilated and tortuous retinal vein, grey-white retina and macula cherry red spot [1,2]. Our patient was diagnosed with POAG, diabetes mellitus and systemic hypertension which are all recognisable risk factors for the development of CRVO [3]. He developed RE CRVO followed by RE CRAO a month later. It was difficult to appreciate the pale grey-white retina and cherry red spot in our case as they were obscured by the extensive haemorrhagic retinopathy. However the diagnosis of CRAO following CRVO is aided by the sequential fundus photos which showed evidence of progressive narrowing of the central retinal artery. In isolated cases of CRVO, the arteriolar calibre is normal. The retinal arteries were ultimately obliterated which clinically seen as white cord. FFA revealing delayed arterial filling time which further supports the diagnosis of combined CRVO-CRAO entity [4].

There are two possible anatomical related patho- mechanism which leads to the development of the CRAO following the initial CRVO. Fujino et al. [5] concludes that in CRVO patient, the sudden rise in intravenous pressure might transfer the pressure through the capillary bed to the retinal artery and hence impairs the retinal artery filling. This pathophysiology is very similar to that described by Hayreh et al. [6], in CRVO associated cilioretinal artery occlusion (CLRAO), the sudden rise in intraluminal pressure in retinal capillary bed secondary to CRVO above the level of that of the cilioretinal artery leads to transient hemodynamic blockage of the cilioretinal artery. This explained that in cases of CRVO, if there is no collaterals available anterior to the site of occlusion, it converts the retinal circulation into a closed loop, results in complete hemodynamic block of the retinal circulation, and hence secondary CRAO. Central retinal artery occlusion (CRAO) may be a devastating sequelae of central retinal vein occlusion (CRVO). The anatomical relationship between the retinal arteries and veins play an important role is describing the patho-mechanism of development of CRAO following CRVO. Although prognosis of visual acuity is not good, aggressive management is mandatory to prevent painful rubeotic glaucoma.

Copyright: © 2015 Md Noh UK, et al. This is an open-access article distributed under the terms of the Creative Commons Attribution License, which permits unrestricted use, distribution, and reproduction in any medium, provided the original author and source are credited. 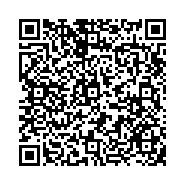