Conclusion: Ketosis type 2 diabetes is a relatively new entity accounting for about one third of all new cases of DK or DKA in our population.

Ketosis is a frequent and potentially life-threatening complication of diabetes. It may occur in known diabetic patients or it may be a circumstance of diabetes diagnosis. Ketosis onset diabetes is generally considered and treated as type 1 diabetes. However, type 2 diabetes may be revealed by ketosis or keto-acidosis [1-4]. Classification of diabetes at the time of ketosis is important for a better long term management. The aim of this study was to analyze clinical, biological and subsequent clinical course data of subjects who have had a ketosis (DK) or ketoacidosis onset diabetes (DKA) and to discuss the different types of diabetes and especially ketosis-prone type 2 diabetes.

We performed a retrospective analysis of all 288 patients referred for ketosis or ketoacidosis new onset diabetes to the endocrinology and diabetology department at Tunisian university hospital La Rabta from 1rst January 2000 to 31th October 2005. They were 178 males (61.8%) and 110 females (38.2%) with a mean (SD) age of 35.5 (17.1) years.

Data management and analysis were made using Epi-Info 6 statistical package. We used CHI 2 test for discontinued variables and Student’s test for continues variables. The difference was considered significant if p< 0.05. 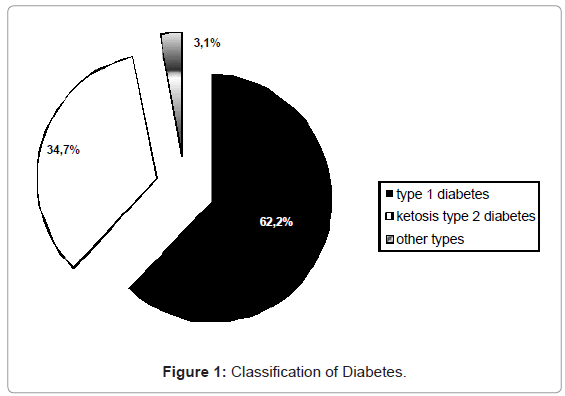 The comparison of clinical data between patients classified as type 1 diabetes and those classified as ketosis type 2 diabetes showed that type 1 diabetes patients were younger, more frequently of male gender (Figure 2,3), DKA was more frequent, BMI and WC were lower. The frequency of family history of diabetes didn’t differ between the two groups (Table 1). Microvascular complications were present in 30 (30%) ketosis type 2 diabetes patients: retinopathy in 6 cases (6 %), peripheral neuropathy in 21 cases (21 %) and nephropathy in 7 cases (7%). Hypertension was present in 28 cases (28%), cerebro-vascular attack in 4 cases (4%), coronary heart disease in 7 cases (7%) and peripheral artery disease in 4 cases (4%). 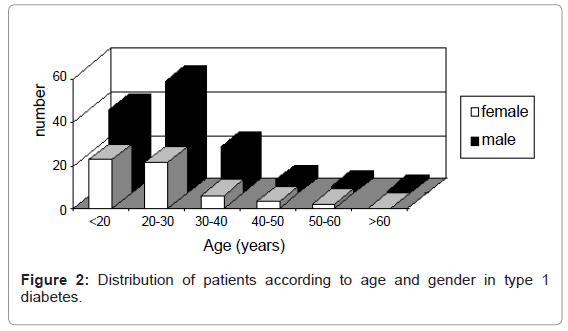 Figure 2: Distribution of patients according to age and gender in type 1 diabetes. 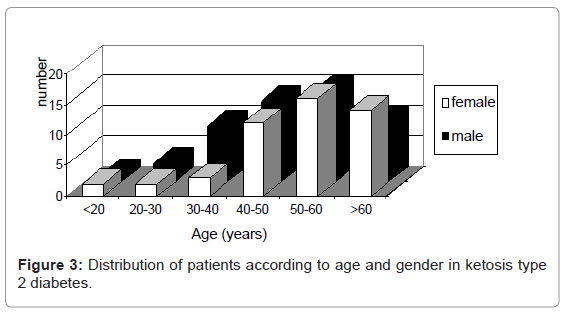 Figure 3: Distribution of patients according to age and gender in ketosis type 2 diabetes.

Table 1: Clinical characteristics of patients according to the type of diabetes. 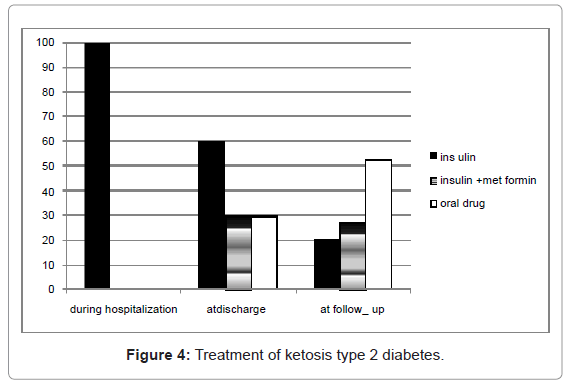 Type 1 diabetes is characterized by a deficiency in insulin secretion and has generally an acute clinical presentation, whereas type 2 diabetes is characterized by an insulin resistance and is a latent disease that can be asymptomatic for years. However, type 2 diabetes can be expressed by a ketosis in the presence of a precipitating factor but ketosis is not a classic initial presentation of the disease. Type 2 diabetes generally occurs in patients with family history of diabetes, abdominal obesity and can be associated with hypertension and dyslipidemia and complicated by micro and macroangiopathy. Whereas, type 1 diabetes generally appears in younger subjects with normal weight and is presented with a marked polydipsia and polyuria, an important weight loss and a ketoacidosis. Type 2 diabetes can be treated with oral agents but type 1 diabetes necessitates insulin therapy. We used a series of these arguments for the classification of our diabetic patients. Thus, 37.8% of cases with presenting DK and DKA revealed ketosis prone type 2 diabetes. This particular form of diabetes was reported in some populations such as those of black African origin and some ethnic minorities. In African Americans, Umpierrez [1] noted that 74 % of patients with inaugural DK or DKA had ketosis type 2 diabetes. On the same way, Nyenwe et al. [2] and Pinero-Pilona & Raskin [3] noted a frequency of 60 %. In Koreans [4], this sub-type of diabetes represented 43% of inaugural DK or DKA. Ketosis type 2 diabetes represents one over 8 cases of diabetes in black American people from African origin [2,5-8] but is rarely described in Asiatic and white populations [9]. Our population is particular as it is a mixture of Arab and Berber races and mostly originates from rural areas that migrated to the capital city of Tunis.

Mean age of patients with ketosis type 2 diabetes was 51.4 years in our study and varied from 33 to 53 years in the literature [5,10]. All studies agree that type 1 diabetes appears at an earlier age. However, age is not sufficient to distinguish between the two types of diabetes as the two types can occur at any age.

Distinguishing type 1 from ketosis type 2 diabetes is generally easy. A young age, a normal weight, the absence of a precipitating factor, the severity of ketoacidosis and the presence of an autoimmune disease are in favour of type 1 diabetes. Whereas, an overweight, the presence of hypertension or of vascular complications and the possibility of treatment with oral drugs are in favour of ketosis type 2 diabetes [5,10].

However, there are some situations where it is difficult to distinguish between the two types of diabetes with only these clinical data. So, the search for the presence of pancreatic auto antibodies and the evaluation of the secretary capacity of beta cells by the dosage of C-peptide can be helpful. Unfortunately, these biological parameters are not routinely available in our country. A Tunisian prospective study concerning 63 cases of ketosis onset diabetes occurring after 30 years of age revealed that pancreatic auto-immunity was present in 36.5% of cases and that Beta-cell functional reserve was preserved in 54%. With these data diabetes can be classified by the Aβ scheme based on the presence or absence of β-cell autoantibodies (A+ or A-) and β-cell functional reserve (β+ or β-) [21].

A re-evaluation of beta cell secretion’s capacity might indicate the necessity of continuing insulin therapy. The management of our patients was only based on clinical data, and 52% of our ketosis type 2 diabetes followed at the office was treated with oral hypoglycaemic drugs. In the study of Pinero-Pilona et al. [11], 39 % (21/54 cases) of DKA were treated with oral drugs after a mean follow-up of 12 months. Mauvais-Jarvis et al. [13] described a remission of diabetes in 75.7 % of African sub-Saharan patients presented with DK or DKA, after a period of 14.3 months of insulin therapy. Forty percent of patients didn’t necessitate insulin therapy during a follow-up of 10 years. It has been reported that treatment with oral hypoglycaemic drugs can extend the duration of the remission phase and prevent ketosis relapse [13,23]. This reversible dysfunction of beta cells is variable [24]. This remission is different from ‘the honey moon’ of type 1 diabetes that has a shorter duration. So, insulinopenia observed in the acute phase is transient in this subtype of diabetes. An initial insulin therapy can relieve glucotoxicity and restore beta cell function. The patients can later be treated with oral drugs like classic type 2 diabetes [25].

In conclusion, ketosis or ketocidosis generally reveals type 1 diabetes but can also reveal ketosis prone type 2 diabetes. Based on clinical data, 34.7% of our ketosis or keto-acidosis onset diabetes was ketosis prone type 2 diabetes. In 52% of whom insulin therapy was subsequently withdrawn. This sub type of diabetes has been described in different populations especially in ethnic minority groups. It is characterized by a transient insulinopenia that is reversible after a short period of insulin therapy improving beta cell function.

Copyright: © 2012 Chihaoui M, et al. This is an open-access article distributed under the terms of the Creative Commons Attribution License, which permits unrestricted use, distribution, and reproduction in any medium, provided the original author and source are credited. 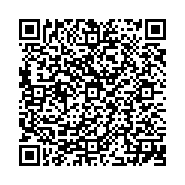