Background: Sepsis is fatal presentation which affects many systems with possible progression to organ dysfunction and organ failure. Among these organs liver plays an important role in the prognosis of this syndrome. This study investigated the effects of hyperbaric oxygen (HBO) and normobaric oxygen (NBO) therapies on liver damage and oxidative stress in an experimental sepsis model.

Results: While MDA levels in HBO group were found to be lower than those in the control group, and comparable to those in the sham group, no difference was detected in the MDA levels between the control and NBO groups. SOD levels in NBO group were detected to be significantly higher than the control group. GSH-Px enzyme activity in HBO and NBO groups was at similar levels. Even though MPO levels in HBO group appeared to be lower than the control group, the difference did not reach statistical significance. When MPO levels and histopathological examination were evaluated, it was observed that neither HBO nor NBO administration in addition to antibiotherapy provided decrease in neutrophil infiltration which has an important role in liver damage.

Conclusion: The benefit of HBO in the treatment of sepsis in addition to the use of antibiotics has also been confirmed to be successful in this study. Furthermore the data obtained from NBO applications in this study, is thought to be potentially useful for sepsis treatment.

Sepsis is a complex syndrome affecting many systems with progression to shock, organ dysfunction, organ failure and death by causing hemodynamic changes in particular [1-3]. Life-threatening organ dysfunction after impaired response of host against infection is implicated in this process [4,5].

Several bacterial agents are implicated in sepsis etiology. While the most frequent agents causing sepsis before antibiotics became available were Streptococci and Staphylococci , with the use of antibiotics, gram negative bacteria started to be isolated at increasingly more rates as the cause of sepsis [6,7].

Bacterial antigenic structures initiate the release of many mediators (cytokines) from endothelial cells and other cells [6,8,9]. The target organ is the vascular endothelium. When endothelial damage occurs, organ perfusion is impaired and organ failure occurs [10,11]. The most common findings in the sepsis are pulmonary, renal, intestinal, hepatic and heart failure [6,9,12].

Liver is believed to play a key role in sepsis as an active player and affected organ of the syndrome [13]. Hepatic damage in sepsis is caused by the reduced hepatic arterial blood flow due to septic shock [14]. Together with all these events in sepsis, a generalized oxidative stress occurs due to increased free radicals in the body [2,11,15]. The major antioxidant enzymes directly involved in the neutralization of reactive oxygen species (ROS) and reactive nitrogen species (RNS) are: Superoxide dismutase (SOD), catalase (CAT), glutathione peroxidase (GPx) and glutathione reductase (GRx) [15]. The other hand, Malondialdehyde (MDA) is the most frequently used biomarker of oxidative stress in many health problems such as cancer, psychiatry, chronic obstructive pulmonary disease, asthma, or cardiovascular diseases [15,16]. In addition, MPO in neutrophils is commonly used as a marker of neutrophil infiltration and MPO levels in sepsis are shown in height [17].

This study investigated the late phase effects of HBO and NBO therapies administered in addition to the anti-biotherapy as the current backbone sepsis therapy on liver damage which has a key role in sepsis in rats with sepsis induced by bacterial inoculation method.

With the decision numbered 09/4K of Ethics Committee of Gulhane Faculty of Medicine, research and development department, 40 healthy, young-adult, male Wistar rats with the weights between 300 and 400 grams were used. Animals were kept under same laboratory conditions throughout the study and fed with commercial rat feed and normal tap water.

For HBO and NBO administration, specially designed and manufactured cylindrical high-pressure chamber with the diameter of 40 cm and length of 60 cm with a nickel-chromium steel body tested for its resistance against 10 ATA pressure was used. For HBO, a pressure of 2.4 ATA was applied, and for NBO a pressure of 1 ATA was applied [22]. Rats were divided into four groups using ‘simple random sampling’ method.

Intraperitoneal (IP) normal saline was administered at an equal volume to Escherichia coli given for sepsis induction.

Following sepsis induction, 50 mg/kg cefepime via IP route was given twice a day with no additional therapy [21].

Following sepsis induction, 50 mg/kg cefepime via IP route was given twice a day together with HBO (at 2.4 ATA, 2 × 90 min/day, 5 day) therapy. Five days after sepsis induction, animals were sacrificed and liver tissue samples were collected.

Preparation of liver tissue: The hepatic tissue levels of malondialdehyde (MDA) for lipid peroxidation, and superoxide dismutase (SOD) and glutathione peroxidase (GSH-Px) for antioxidant response were measured. Neutrophil migration using myeloperoxidase (MPO) activity and its contribution to liver damage was planned to be evaluated [24]. First, animals were taken to ketamine-xylazine anesthesia. While on the one hand, blood was collected from the vena cava with a syringe, while the right ventricle was injected with NaCI (normal saline). The extracted liver was again washed out in cold normal saline and removed from blood debris and placed in prelabeled plastic ependorf tubes and placed in a liquid nitrogen tank to be stored at -80°C at the end of the treatment [25].

Malondialdehyde (MDA) measurement: MDA measurement was performed using the method described by Okhawa et al. For this purpose, 10% tricloracetic acid (TCA) and 0.675% thiobarbituric acid (TBA) were used. A 0.5 ml sample (homogenate) was added to 10% TCA and vortexed. Then the samples were incubated at 90°C for 15 minutes. The samples were centrifuged at 3000 rpm for 20 min. After that, 2 ml supernatants were added to 1 ml 0.675% TBA and vortexed. The samples were incubated at 90°C for 15 minutes. After an incubation period of 15 minutes at 90°C, the samples were absorbance at 530 nm was measured using a spectrophotometer. The extinction coefficient (1.56 × 105 cm-1M-1) of the TBA-MDA complex was used in the calculation [26].

Superoxide Dismutase Measurement (SOD): SOD measurement was performed using the method described by Sun et al. This method is based on the principle of determining the formation of blue colored formazon at 560 nm in the spectrophotometer. Therefore, reagent consisting 0.3 mmol/l xanthine, 0.6 mmol/l EDTA, 150 μmol/l NBT, 400 mmol/l Na2CO3 and 1 g/l bovine serum albumin (BSA) were prepared for measuring. Then 0.8 mmol/l CuCl2, 2M (NH4)2SO4 (Ammonium sulphate) were prepared and 167 U/l xanthine oxidase (XO) were prepared in ammonium sulphate. The supernatants were obtained by centrifugation at 3220 rpm for 30 min at +6°C. Supernatants and chloroform-ethanol solution were mixed in a 1:1 ratio and then vortexed [27]. The samples were centrifuged at 3220 rpm at +4 for 40 min. 50 μl of samples were added to 1425 μl measuring reagent and 25 μl 167 U/l XO. Blind tube was prepared. Following the incubation period of 20 minutes at 25°C, 200 μl of samples, and 100 μl 0.08 mM/l CuCl2 were added to Elisa Reader plate. Then the plate was absorbance at 560 nm was measured using an Elisa Reader. The absorbance values were calculated by adding the following formula: 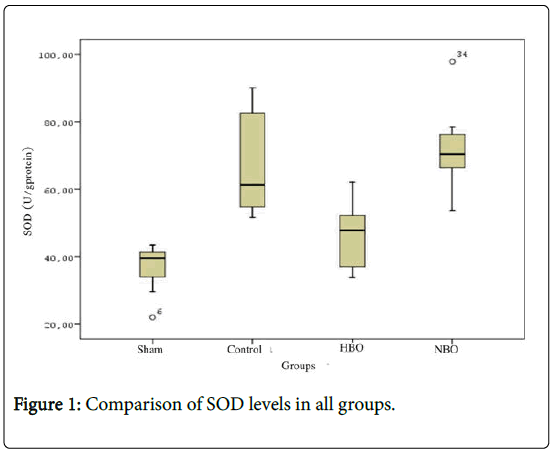 Figure 1: Comparison of SOD levels in all groups. 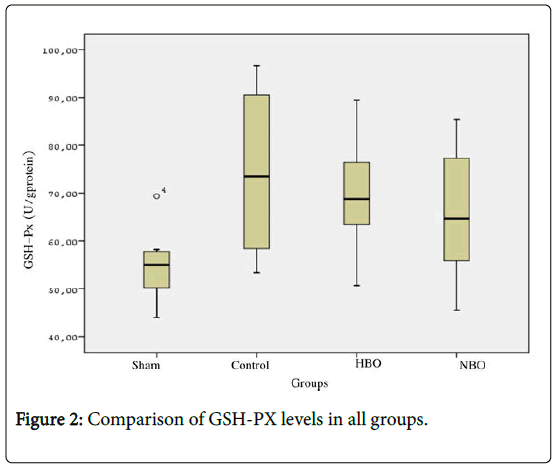 Figure 2: Comparison of GSH-PX levels in all groups. In sepsis patients, alleviating liver damage and restoring liver function decrease the morbidity and mortality rates [13]. Liver dysfunction after sepsis is considered to be a risk factor independent from mortality induced by multiple organ dysfunction syndrome and sepsis [13]. When viewed from this aspect, many investigators are seeking adjuvant therapy in addition to specific anti-biotherapy for the treatment of sepsis [5].

Sepsis models using live bacteria have several advantages. The strain and infecting dose of bacteria can easily be standardized. In addition, the host immune response is directed at the whole microbe. As with endotoxin models, bacterial infection models can be manipulated to produce more clinically relevant results. Irrespective of limitations, these models have proven useful and provide insights into mechanisms of the host response to pathogens 3. A controlled inoculation model was preferred for sepsis induction. The most commonly used bacterium in this model is E. coli. For this reason E. coli ATCC 25922 strain H110 was used in the experiment [30,31].

Studies regarding HBO as adjuvant therapy in sepsis have also been performed in the past, and its beneficial effects have been reported [12,32]. The role of cellular oxidative damage in multiple organ dysfunction syndrome is well-known. When overly produced or inadequately cleared ROS directly attack lipid and protein structures in biological membranes and impair the membrane structure [33]. In our study, MDA levels were detected to be high in the control and in NBO groups, and comparable in HBO and the sham groups. Those results show that HBO administration in sepsis in addition to antibiotherapy decreases lipid peroxidation and oxidative damage.

Evidence demonstrating the association of endotoxemia, sepsis and septic shock with the formation and release of ROSs reveal that ROSs play an important role in sepsis and/or septic shock [34]. Gram negative bacteria such as E. coli increase oxygen consumption via lipopolysaccharides, activated neutrophils, TNF-α and other cytokines, and cause ROS formation [35]. Markers of oxidative stress measured from the peripheral venous samples is poorly reflective of hepatic tissue oxidative stress. Therefore, we measured oxidative stress markers in liver tissue [36]. It is well-known that HBO administration increases both ROS formation and antioxidant enzymes [37]. In our study, increased activity of both SOD and GSH-Px was detected in sepsisinduced groups (Control, HBO, NBO). This result may be considered as the increase in antioxidant enzymes to remove ROSs formed in sepsis. SOD levels in this NBO group were found to be higher than those in the control group. MDA values in HBO group and NBO group were observed to be close to each other. Together with the fact that MDA levels are also lower in HBO group compared to the control and NBO groups, it can be explained by the lesser oxidative damage in HBO group and the fact that the evaluation was performed 5 days after the induction, thereby, reflects late phase data.

Liver appears to be a strong sweeper of the circulating bacteria and their products, and in E. coli bacteremia, neutrophil accumulation in liver sinusoids is well-known [38]. A new study has shown apparent polymorphonuclear leukocyte infiltration in liver cause by E. coli lipopolysaccharides [39-41]. As a main potential site for ROS production, neutrophils play an important role in the development of oxidative stress. Neutrophils activate Kupffer cells by causing oxidative stress, and contribute to microvascular dysfunction and edema formation:

1. Found in neutrophils, MPO is widely used as a marker of neutrophil infiltration and the MPO levels have been shown to be elevated in severe inflammatory processes such as sepsis

In rats with sepsis even though HBO and NBO administration in addition to antibiotherapy induced by controlled inoculation method using E. coli did not provide adequate histological recovery it was observed that HBO treatment reduced oxidative liver tissue damage. SOD levels in this NBO group were found to be higher than those in the control group. Studies aiming longer periods of histological recovery follow-up are needed. In NBO group the MDA and GSH-Px values were detected to be similar to those in the HBO group.

In this study the benefit of using HBO in addition to the use of antibiotics has also been confirmed. Furthermore, the data obtained from NBO applications in this study, is thought to be potentially, as well. NBO administration which is an alternative choice in the treatment of sepsis happens to be easier and less invasive procedure. Nevertheless, additional clinical studies are still needed for this specific subject.

Ethics committee approval was received for this study from the Institutional Ethics Committee.

The authors have no conflict of interest to declare.

The authors declared that this study has received no financial support.

Copyright: ÃƒÂƒÃ‚Â‚ÃƒÂ‚Ã‚Â© 2019 Bektas A, et al. This is an open-access article distributed under the terms of the Creative Commons Attribution License, which permits unrestricted use, distribution, and reproduction in any medium, provided the original author and source are credited. 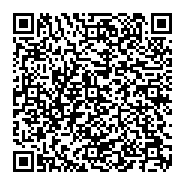