Evaluation of Predisposing and Comorbodities Associated with Diabetes Mellitus in Pakistan

Diabetes mellitus is a group of disorder associated with hyperglycemia as a result of insulin function, or failure in insulin secretion Long term dysfunction also effect the normal function of different organs especially, kidneys, heart, blood vessels and eyes. The aim of this study is to find out several pre-disposing and high risk factors associated with diabetes along with other disorders among the diabetic patients in Karachi. The data collected through printed questionnaire based on 20 questions, total 100 patients participate in the study 33 males and 77 females of different age groups. Our results shows that the most prevailing risk factor among the diabetic patient in Karachi is past history of excessive consumption of sugar, the most prevailing comorbidity in the observed diabetic patients is neuropathic pain. Metformin and Glimepride are the most widely used oral medications along with insulin. The ratio of satisfaction is more in patients taken medications orally as compare to other route. Some patients also experience undesirable conditions in which increase in thirst and increase urination are more common in both males and females.

Diabetes mellitus is a handful of the paramount routine defy in our society. According to the survey about 200 million people are suffering from this disease the world over [1]. According to the pair of summary in US adults it was computed that every year about 300 000 US adults die due to diabetes [2]. It is the orchestrate of diseases united in hyperglycemia as a circumspection of insulin edict, or failure in insulin secretion. Long term dysfunction also effect the normal function of different organs especially, kidneys, heart, blood vessels and eyes [3].

According to the journal of American association (JAMA) it is concluded that in women risk of progression of type-2 diabetes is correlated with excess intake of sugar-sweetened diet by yielding exorbitant calories [4]. The perception of type-2 diabetes mellitus shows that genetics mask the vital role in its progression. However, the real pathogenesis is still unknown but it is found that mutations in the content gene may induce diabetes [5]. A diverse group of studies shows that weight gain and obesity may elaborate the possibilities of diabetes. Survey results found that diabetes associated with obesity is the sixth leading cause of death [6]. According to prior clinical trials high blood pressure is associated with cardiovascular peculiarities in diabetic patients along with diastolic dysfunction, left ventricular hypertrophy, atherosclerosis [7]. Various studies confirm that osteopenia is one of the sustained complexity related with type-1 diabetes. Devaluation in bone mineral density with poor glycemic control give rise to diabetes [8]. According to Yaggi et al. long and short duration of sleep increases the risk of diabetes, independent of confounding factors. Sleep duration is also one of the novel risk factor of diabetes [9]. Type-2 diabetes is the most prevailing risk factor for hypertension most widely in younger patients. It is also associated with increased risk of cardiovascular diseases and one of the risk factor of retinopathy and micro albuminuria [10]. Neuropathic pain is an ordinary incident resulting from contusion to the root or non-essential apprehensive corpus juris. The action by which diabetes careful in loftiness discoloration is indeterminate but the swing is to envoy bruise at encompassing levels of the timid regulations immigrant the residue of the peripheral nerves to the brain. Injury to the brain results in pain through a series of mechanisms flunkey in young processing of sensory input into the terrified system. Diabetes affects far areas of the nervous system and the beneficence of higher-class levels of the nervous system is often overlooked. Neurophysiological and MRI jurisdiction entirely warn deviate these may contribute to the throbbing of diabetic neuropathy. Subjective dysfunction in diabetic patients is a streamer spokeswoman in inflation the trouble attached wide around aspects of the affliction, but upper and conduct of pain can greatly improve the quality of life [11].

The level of focus of our dissemble is to grasp the pre-disposing factors related to diabetes, as past history of excessive sugar intake, family history of diabetes, poor health condition, cardiovascular problems, respiratory problems like asthma, bone disorders like arthritis most commonly in females are major risk factors related to diabetes, the object is to restrain out the most in circulation comorbidities in substitute stage groups, the most prevailing diabetes type, the medications used, to find out other adverse reaction which results after the treatment and to find how much the patients are satisfied with their treatment protocol.

The study designed was conducted among 100 diabetic patients including men women in Karachi. This perspective studies is based on identification of predisposing factors of diabetes questioner which are taken at different places.

The data was collected through a printed questionnaire based on 20 questions. This questionnaire was distributed to a total of 100 individuals (n = 100) between the ages of 20 onwards to get the general views of people of different ages regarding the topic of study. People responded to the questionnaire in written form. Evaluation of the answers and calculations were done manually or by the help of calculators without any involvement of computer software. The result was expressed in percentages by using bar graphs and line charts. Bar graphs were used to evaluate that how many patients were having previous history of excessive sugar intake, family history of diabetes, obesity and the most prevailing type of diabetes in different age groups.

After careful evaluations results interpretated separately for both male and females to findout the possible aggravating factors associated with Diabetes Mellitus type I and type II shown in Figures 1 and 2. 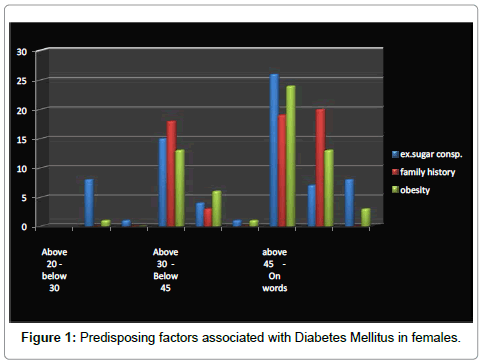 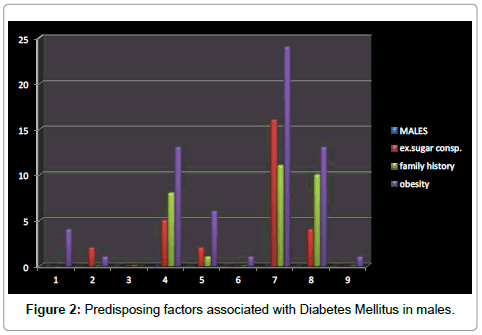 Patients were asked by questionnaire detail pre and post disposing factors, includes either they were sweet lovers, how many teaspoon of sugar they were taken, any family history of diabetes, obesity, high blood pressure, high cholesterol level, asthma or any breathing problem, weak immune system, any bone disorder, heart problem, which type of diabetic patients they are, any neuropathic pain, current medications for diabetes, any undesirable experience after taking drug, are they satisfied from their treatments and any other important experience they want to share later on disease treatment shown in Figures 3 and 4. 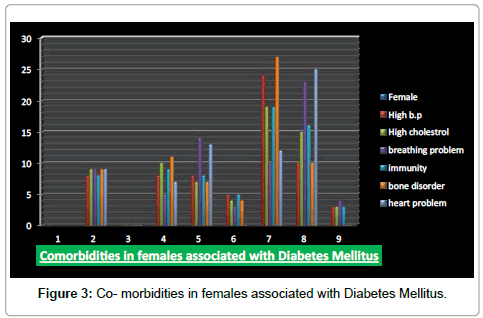 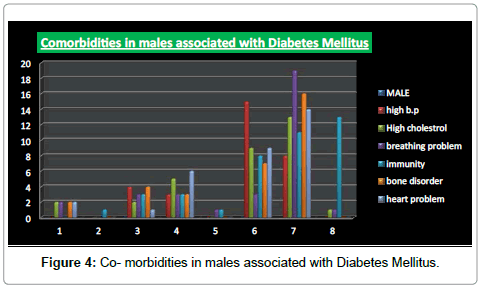 According to our survey result some comorbidities associated with diabetes mellitus also observed, that is in females 9% females have cardiovascular diseases, 23% females with high blood pressure, 19% have high cholesterol levels (mainly dyslipidemia), 5% females are suffering from breathing problems, 18% of females have poor immunity and they become ill very often, 28% are complained about the bone disorders most commonly arthritis and osteoporosis, 34% females are found with neuropathic pain. While, comorbidities found in males including 7% with cardiovascular diseases, 18% with high blood pressure, 10% with high cholesterol, 12% males with poor health that is become ill very often, 11% with bone disorders, 5% males with breathing problems.

The most widely used oral medication are getryl, diamicron, Glucophage, metformin HCl, sitagliptin, amaryl, acarbose-precose. While lantus is the only medication which is used subcutaneously. And human insulin is available as intravenous route of administration. The results shows that the patients taken oral medication are more satisfied as compare to the patients who are taken medications other than oral route.

The finding confirms that past history of excessive sugar consumption is a strong pre-disposing factor for diabetes mellitus in both males and females. Our finding in agreement with previous studies one of such study in 2004 reported that increasing intake of refined carbohydrate concomitant with decreasing intake of fiber paralleled the upward trend in the prevalence of type-2 diabetes observed in united states during 20th century [12]. While on another publication in 2013 reported that diabetes might result from excessive fructose intake [13]. Neuropathic pain is affirmed to be the most prevailing co-morbidity associated with diabetes mellitus. However, recent study approved that 45% patients develop neuropathy during the course of their disease. Pain due to diabetic neuropathy affects the feet and ankles [14]. In conclusion, our finding, together with previous literature indicates that care should be taken to all those people who are sweet lover and consume large amount of sugar per day.

We would like to pay thanks and special gratitude to all patients participated in this study and our teacher who supported us in this study.

Copyright: © 2015 Ayub M, et al. This is an open-access article distributed under the terms of the Creative Commons Attribution License, which permits unrestricted use, distribution, and reproduction in any medium, provided the original author and source are credited.