Methods: A cross section study of patients with type 1 diabetes mellitus at the diabetic centre in Saudi Arabia

Conclusion: Many patients with type 1 diabetes have poor glycemic control placing them at high risk of diabetic complications.

Type 1 diabetes mellitus (T1DM) results from a cellular-mediated autoimmune destruction of the β-cells of the pancreas [1]. T1DM accounts for about 10% of all diabetes, affecting approximately 1.4 million people in the U.S., and 10-20 million globally [2]. The prevalence of T1DM was 0.193% in the Saudi males and 0.237% in the Saudi females [3]. Blood glucose may be the most important clinical characteristic of diabetic patients. Not only does the level of blood glucose define the disease [1], it is a major risk factor for complications of diabetes. Control of hyperglycemia can reduce the incidence of acute diabetic complications and long-term end-stage macrovascular and microvascular complications in T1DM [4]. Despite the clear importance of hyperglycemia, few studies have measured glycemic control in a representative national sample of people with T1DM [5]. Therefore, we describe the glycemic control of population with T1DM in our institution.

Eligible patients were older than 12 years old, had T1DM [1]. All patients were recruited from the population of the Diabetic Centre at King Fahad Armed Forces Hospital between January 2008 and June 2009. All the patients gave their or their guardian informed consent prior to their inclusion. The study was approved by the ethical board of King Fahad Armed Forces Hospital. Eligible patients met with investigators for a complete history and physical examination, to have baseline laboratory assessments including glycosylated hemglobin (HbA1c). HbA1c was expressed as percentage and measured using the high performance liquid chromatography.

Univariate analysis of baseline and follow up demography and clinical laboratory endpoints were accomplished using unpaired t-test where appropriate. Chi square (χ2) test were used for categorical data comparison. Pearson’s correlations between continuous variables were used as a measure of association. The data were analyzed by one-way analysis of variance (ANOVA), to estimate the significance of different between groups. All statistical analyses were performed using SPSS Version 16.0. All P values were based on two-sided tests. The difference between groups was considered significant when P<0.05.

Data are in percentage

Table 2: Characteristics of patients with type 1 diabetes mellitus stratified by HbA1c to gender and age. 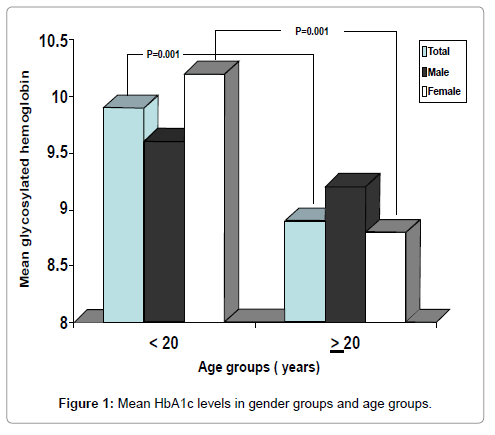 This study makes several contributions to clinical studies of glycemic control in patients with T1DM. Due to regionalized characteristics, thus, our data cannot be generalized to the overall population. Moreover, it does not represent the general conditions of healthcare services offered in our city. Other aspect that should be considered in the assessment of our results is the size of our sample and the cross section type of the study.

The reductions in HbA1c levels achieved in the intensive therapy arm of the DCCT were associated with decreased rates in the appearance and progression of microvascular complications, in comparison to conventional therapy. These differences in complications persisted even though the differences in glycemic control between the two therapy arms narrowed after the trial ended. The benefits of tight glycemic control in preventing or delaying microvascular complications are therefore clear [6].

In our study, the average HbAlc of 9.4% was higher to that described in Belgium with values of 6.6%, a cross-sectional multi-centered study in Europe, Japan, and the United states, with values of 8.6% [7,8], and is similar to the only other published data: Denmark (mean HbA1c 9.1%) and a cross-sectional study with children and adolescents in France (mean HbA1c 9.0%) and a population based study in Scotland with value of 9.1 % [9-11]. The DCCT described patients with over 13 years of age who had intensive treatment and multidisciplinary team support presenting HbAlc, at the end of the study, of 7.1%. The comparison of our results with those described above allows for the conclusion that our services are not providing satisfactory glycemic control results.

90.5% were not able to achieve the American Diabetes Association goal and only 27.7% of patients had a HbA1c concentration less than 8% comparable to other studies [12]. That makes our population at risks for diabetes complications. Several factors may contribute to these observations. Many barriers to tight glycemic control exist in clinical practice that are not found in trial settings. The DCCT suggested that switching to a more intensive insulin regimen (four or more daily injections or pump therapy), even in young people with type 1 diabetes, was the major factor in producing good glycemic control [13]. Since the publication of the DCCT, tight glycemic control, with HbA1c <7%, has been one of the central aims of diabetes care. However, after the publication of the study, debate ensued, suggesting that the “clinical support package” (i.e., intensive medical follow-up, additional nursing and dietetic input, and frequent contact) was the main reason for the improvement in glycemic control [14]. Recently, further strategies have been introduced to optimize glycemic control. These include an intensive education programme; Dose Adjustment for Normal Eating (DAFNE), DAFNE may produce short-term improvements in HbA1c levels, but long-term data on sustained tight control is lacking [15]. A highly motivated patient willing to commit time and comply with advice is needed, along with considerable nurse educator resources. Many patients do not comply with regimens long-term or move away from the clinic area. Diabetic patients who frequently missed appointments had substantially poorer glycemic control than those who missed none. Pharmacologically treated patients missing more than 30% of scheduled visits had an HbA1c value 0.7 point higher relative to those with perfect attendance, a difference that is clinically relevant. Missing appointments could have a direct effect on clinical outcomes by reducing continuity of care, missing opportunities to measure clinical variables or adjust medications, delaying the appropriate timing of interventions and screenings, and hindering the development of a trusting provider–patient relationship. The number of appointments necessary per year for optimal health care and diabetes control varies greatly, and there is no recommended minimum; however, we assume that office visits are medically necessary and that a missed appointment is potentially detrimental to care management [16,17]. Appointments cannot be offered as frequently as visits in clinical trials, due to resource limitations. None of our patients were treated with continuous subcutaneous insulin infusions SII), in contrast to many patients in the intensive cohort of the DCCT. Some studies suggest that use of CSII may confer an advantage over Multiple daily injections in achieving better glycemic control others not [18-21]. CSII is more expensive than MDI administration, requires a highly motivated patient without psychological problems, and an experienced diabetes team who can provide regular and frequent input into the ongoing care of the patient. The recently introduced long-acting analogue such as insulin glargine may be useful in improving fasting hyperglycaemia and reducing the incidence of hypoglycaemic episodes in patients with type 1 diabetes [22-26]. It is possible that the use of long-acting analogues may encourage the patient to aim for tighter glycemic control, without the fear of hypoglycaemia leading to defensive reductions in insulin doses.

Different studies with T1DM children and adolescents demonstrated that 34-62% of patients maintained a satisfactory level of HbAlc with good glycemic control. Different factors associated to general population of children can cause fluctuations of glycemia and, consequently, affect HbAlc and upset the maintenance of good glycemic control [7,8,10]. The relatively high prevalence of poor glycemic control achieved in this study, reflects the greater needs for more efforts for improvement.

These data indicate that many patients with type 1 diabetes in our community have poor glycemic control placing them at high risk of diabetic complications. It provides important clues as to the magnitude and structure of the primary and secondary intervention programs that will be required to effectively manage this disease. More national studies are needed to assess glycemic control among diabetic patients in the Kingdom.

We are grateful to Dr. Murtadha Khan and Dr. Ahamd Al-Akl and the staffs from the diabetic centre at King Fahad Armed Forces Hospital for his valuable contributions in data collection. The authors have no conflict of interest to disclose.

Copyright: © 2013 Aljabri KS, et al. This is an open-access article distributed under the terms of the Creative Commons Attribution License, which permits unrestricted use, distribution, and reproduction in any medium, provided the original author and source are credited.