Diabetes is a major degenerative disease in the world today [1], affecting at least 15 million people and having complications which include hypertension, atherosclerosis and microcirculatory disorders [2]. It is also associated with long-term complications, including retinopathy, nephropathy, neuropathy and angiopathy [3-5]. Controlling blood sugar levels and keeping these closer to normal values is able to reduce the risk of diabetes and death by these complications. Since dietary carbohydrates had the most direct impact on blood sugar levels, controlling the amount of carbohydrate consumed per meal is the focus of diabetes nutrition management [6]. Raisins, like all commonly consumed fruits, provide carbohydrates as the only caloric macronutrient but it is considered as a great source of many polyphenolic compounds (flavonoids, tannins, phenolic acid) playing important roles in nutrition and health care [7,8]. Spiller et al. [9] first studied the hypocholesterolemic effect of plant-based diets, which included more than one serving of sun-dried raisins daily. Keen and schram showed that a diet providing 2, 3.5 and 5.5 ounces of raisins per day for 4 weeks lowered ox-LDL levels [10]. Besides, research suggest that addition of raisins to the daily diet has been shown to lower total and LDL cholesterol levels, reduce markers of inflammation, increase plasma antioxidant capacity and lower circulating levels of oxidized LDL, a marker of coronary heart disease risk [11,12]. Also browning reaction products (BRPs) in raisin have been reported to prevent or retard oxidation reactions in lipid systems [13,14], because they have similar chemical properties as phenolic acids [15]. Experimental diabetes in animals has the advantage that it allows the analysis of the biochemical events that take place not only during the induction of a diabetic state but also after it has become established and during its evolution to a severe insulin deficiency or even death [16]. Alloxan is a specific toxin that destroys the pancreatic β cells, provoking a state of primary deficiency of insulin without affecting other islet types [17,18]. Hence, it was selected to induce diabetes in the present study and the principal objective was to determine the potential beneficial antidiabetic effects of three concentrations of raisin extract (125, 250 and 375 mg/kg) during 4 weeks on alloxan-induced diabetic rats.

Dried fruit was extracted with distilled water by grinding with a mortar and pestle. It was incubated for 24 h and filtered using a Buckner funnel and Whatman No. 1 filter paper. It was the filtrate that was administered to the animals in the course of this study, fresh for a maximum of two days after which fresh extract was prepared.

Male Wistar rats (Société des Industries Pharmaceutiques Tunis, Tunisia), weighing 200-250 g were housed under standard environmental conditions (23°C, 55 ± 5% humidity and a 12 h light/dark cycle) and maintained with free access to water and a standard diet ad libitum. Experimental diabetes was induced in rats by intraperitoneal injection of alloxan monohydrate at a dose of 120 mg/kg. After 2 weeks, animals with blood glucose levels of 200 mg/dl and above were considered diabetic. The rats were divided into 5 groups of 8 animals per group. Group 1: Non-diabetic untreated rats (Control), Group 2: Diabetic untreated rats, Group 3: Diabetic rats treated with 125 mg/kg “Karkni” extract (D+C1), Group 4: Diabetic rats treated with 250 mg/ kg of the “Karkni” extract (D+C2) and Group 5: Diabetic rats treated with 375 mg/kg of the “Karkni” extract (D+C3). After confirming diabetes, “Karkni” extract was administered orally, in the morning, once every 24 hours for 4 weeks. At the end of this treatment period, the animals were fasted overnight for 12 hours. Blood samples from rats were collected under mild ether anesthesia in heparinized tubes and centrifiguted at 3000 g for 15 min at 4°C. Plasma samples were stored at -20°C in aliquots until analysis. All experimental protocols used were in accordance with the guidelines of the local Committee on Use of Laboratory Animals.

Data were subjected to one-way analysis of variance for means of comparison, and significant differences were calculated according to Duncan multiple range test. Data are reported as means ± standard error of the means. Differences at P<0.05 were considered statistically significant. SPSS (version 11.0) was used to perform the statistical analysis. Table 1: Effect of “Karkni” extract on lipid profile of alloxan-induced diabetic of rats. 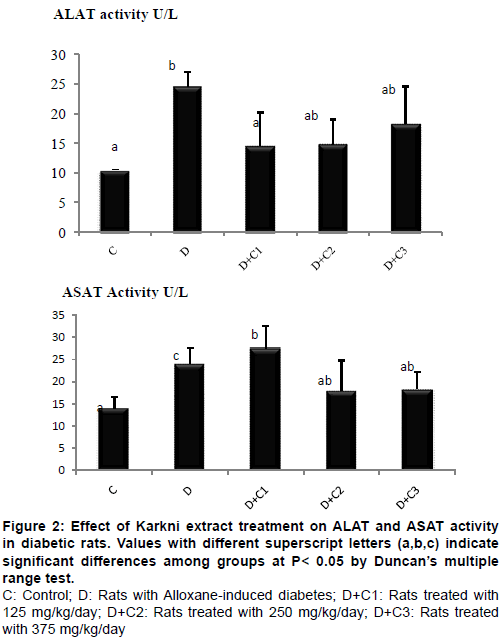 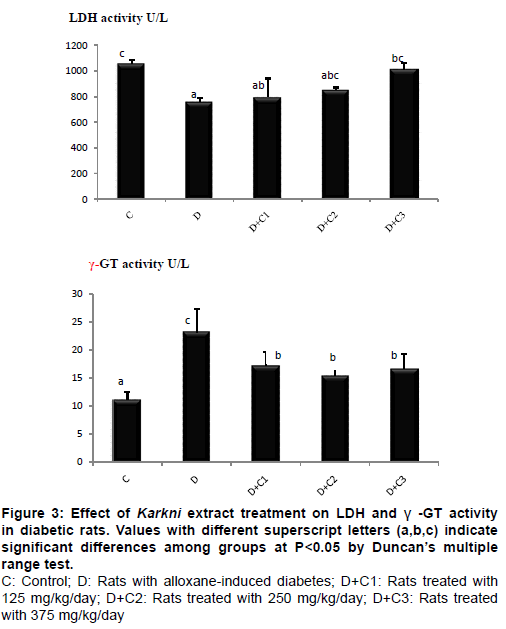 Raisin polyphénols have demonstrated significant antioxidant anticarcinogenic, anti-inflammatory, thermogenic, probiotic, and antimicrobial properties in numerous human, animal, and in vitro studies [6]. But the effect of raisin polyphenols in diabetes is still unknown. The present study was conducted to determine the effect of feeding 3 doses of raisin extract “Karkni” on the lipid parameters in alloxan rats. Alloxan, at a dose of 120 mg/kg body weight, caused sufficient damage to pancreatic β cells so that secreted insulin was not enough to regulate blood glucose and resulted in a significant increase in blood glucose levels [24-26]. In our experiment, we had shown that raisin extract decreased plasma glucose for 4 weeks compared with those of the diabetic’s controls. Both doses (125 and 250 mg/kg) of the extract showed a significant hypoglycemic effect but rats treated with 375 mg/kg of “Karkni” extract showed significant increases in blood glucose after three weeks. These results can be related with the carbohydrates content in raisin. Previous studies had shown that hypoglycemic effect of many herbs was related to flavonoids content and these constituents can preserve the insulin-secreting capacity and viability of pancreatic β cells [27]. Therefore, the presence of these constituents in our variety of raisin may explain the hypoglycemic activity, and we can conclude that the antioxidative activities of raisin extract in alloxan-induced diabetes, at least in part, may be related to antihyperglycemic capability. The present study found that the intake of “Karkni” extract significantly lower plasma total cholesterol, triglycerides and LDL cholesterol concentrations but increased serum HDL cholesterol in (D+C1), (D+C2) and (D+C3) groups when compared with those of diabetic control. Also decreased level of coronary risk was observed in the same group but it was especially interesting in (D+C2) group, (2.82 mg/dl). These results were similar to those found by Bruce et al. [11] and Gardner et al. [12]. High levels of circulating cardiac dysfunction/damage markers such as, LDH and uric acid, represent a sensitive predictor of increased cardiac complications [28]. In our study, “Karkni” extract showed a significant decrease in levels of uric acid in (D+C1) and (D+C2) groups when compared with those of diabetic control. But it was still remaining higher in (D+C3) group. In diabetic rats the elevation observed in uric acid level could be due to the increased abundance and activity of xanthine oxidase. It was responsible for the formation of uric acid and also serves as an important biological source of ROS (superoxide) that contribute to oxidative damage involved in many pathological processes such as diabetes, atherosclerosis, cancer and aging [29-31]. Moreover, decreasing levels of HbA1c observed in (D+C2) group can reduce the risk of lipid peroxidation [32]. These explain the important role of raisin to decrease cardiac damage markers in diabetic person with 250 mg/kg.

Also results presented in table 2 clearly revealed that the administration of the three concentrations of “Karkni” extract to the diabetic rats could restore the changes in the levels of hemoglobin, urea, creatinine and total protein after 4 weeks of treatment to their normal levels. Lal et al. proved that in diabetes, elevated levels of serum urea, uric acid and creatinine are observed which may be due to renal damage caused by abnormal glucose regulation or elevated glucose and glycosylated protein tissue levels [33]. So it could be concluded that the above action of raisin may be due to its potential to control hyperglycemia and renal damage in diabetic rats. Alloxan induces increase of AST, and ALT activity in rats (Figure 2). This results were similar than that observed with streptozotocin induced diabetic rats [34]. Restoration of the normal level of ALAT may indicate the normalizing effect of both 125 and 250 mg/kg of “Karkni” extract. As for ASAT activity, restoration of the normal level was observed only with 250 and 375 mg/kg of “Karkni” extract. A change in enzyme activity is presumed to be due to the decreased blood insulin concentration [35], but is also related to energy metabolism, as these enzymes play a role in gluconeogenesis [36]. As for LDH activity, results from our experiment show that diabetes decreases LDH activity (Figure 3). These result are similar than Tormo et al. [37], but not than Melinkeri et al. [38]. A highly significant elevation in the activity of γ-GT was observed in plasma of alloxan-induced diabetic rats. But after treatment of raisin, increased activity of this enzyme was lowered to near normal that indicates the possible prevention of necrosis in the liver by “Karkni” extract. The same result was observed by McLennan et al. [39]. Also, the increment of the activities of AST, ALT and LDH in plasma is mainly due to the leakage of these enzymes from the liver cytosol into the blood stream [40], which gives an indication on the hepatotoxic effect of alloxan, but raisin extract reduced the activity of these enzymes in plasma so the oral administration of “Karkni” extract had a beneficial effect on the diabetic state reducing the hyperglycemia as well as hyperlipidemia.

In conclusion, our study demonstrates that “Karkni” extract corrects hyperglycemia and dyslipidemia, thus improving the atherogenic index. The 250 mg/kg dose was found to be the most effective in restoring changes during the 4 weeks. This implies that raisin can prevent or be helpful in reducing the complications of diabetes. However, further investigations to fully identify the biologically active ingredients and to define the precise molecular mechanism(s) of these effects are required.

Copyright: © 2012 Ghrairi F, et al. This is an open-access article distributed under the terms of the Creative Commons Attribution License, which permits unrestricted use, distribution, and reproduction in any medium, provided the original author and source are credited.