Is the Fetal Origins Hypothesis of Diabetes Supported by Animal Research? A Systematic Review and Meta-Analysis of the Evidence

Methods: An electronic search was performed in Medline and Embase to identify all articles that reported studies investigating the effect of prenatal undernutrition on plasma insulin, plasma glucose and beta cell mass in animal models. Summary estimates of the effect of prenatal undernutrition on mean glucose concentration, insulin level, and beta cell mass were obtained through meta-analysis.

Conclusions: Despite significant heterogeneity, evidence from experiments in different species suggests that prenatal undernutrition – both general or protein restriction – results in increased glucose and reduced insulin concentrations as well as beta cell mass in later life.

Birth weight, however, is only a proxy for maternal undernutrition during gestation and the epidemiological studies in humans are observational, hampering the ability to draw definite conclusions on causality. Animal models allow us to experimentally study the effects of maternal undernutrition during gestation on glucose and insulin metabolism. There is a wealth of animal models used to investigate the developmental origins of type 2 diabetes. Therefore we systematically reviewed the literature on prenatal undernutrition and glucose and insulin metabolism in animal studies and used meta-analysis to obtain summary estimates of the effects of prenatal undernutrition on plasma glucose, insulin and beta cell mass.

We included studies that provided data describing outcomes in experimental animal models of prenatal undernutrition that reported on plasma glucose, plasma insulin or beta cell mass as measures of outcome. Prenatal undernutrition included low protein malnutrition and general caloric malnutrition. Studies had to report outcomes in comparison to control animals that were born to a mother that was normally fed throughout pregnancy. Eligibility was evaluated independently by two readers. Disagreements were resolved in consensus discussions.

Two reviewers independently extracted information on study design, exposure period, animal species and type of undernutrition. To assess methodological quality, data on allocation concealment, randomization, blinding and sample size calculation were extracted. When more than two experimental groups were formed, we focused on the experimental group with malnutrition in pregnancy alone. When outcome in offspring was measured at multiple time points, we chose the oldest age at which the measurements were taken. When multiple groups were measured at different ages, both age groups were included. If results were only displayed graphically, outcome was read as precise as possible. Studies that reported results as mean and standard deviation or standard error, and number of animals per group were used for meta-analysis. Data on plasma glucose, plasma insulin and beta cell mass were converted to mmol/l, nmol/l and mg, respectively.

Data were analyzed using Review Manager Version 5.0. To examine potential publication bias we constructed funnel plots. We examined the possible heterogeneity in results across studies by calculating the I2; statistic.

Summary estimates of the effects of prenatal undernutrition were obtained using a random effects model for meta-analysis, which accounts for both within- and between- study variability. Separate estimates were obtained for model type (protein or general malnutrition) and outcome measure (plasma glucose, plasma insulin and beta cell mass). The summary effects were expressed as mean difference with 95% confidence intervals (CI). When significant statistical heterogeneity was detected, the sources of heterogeneity were explored and subgroup analyses were performed for different species, sex, experimental regimens or ages at examination. To evaluate the robustness of our results against influential studies, a leaving-one-out sensitivity analysis was performed (in which the analyses were repeated several times, each time leaving one of the studies out to examine that individual studies’ influence on the overall outcome).

The search resulted in 1827 articles, of which 117 were considered potentially eligible after screening titles and abstracts (MV and ST). After reading full text articles (MV and either DY, RP or ST), 49 primary studies met the inclusion criteria and were suitable for data extraction (Figure 1). Twenty-six studies reported on protein restriction, one using a mouse model [4], and twenty-five using a rat model [5-29]. Twenty-four reported on general (caloric) undernutrition, one study using guinea pigs [30] and two on a mouse model [31,32], five using a sheep model [33-37] and 16 studies on rats [7,8,13,38-51]. 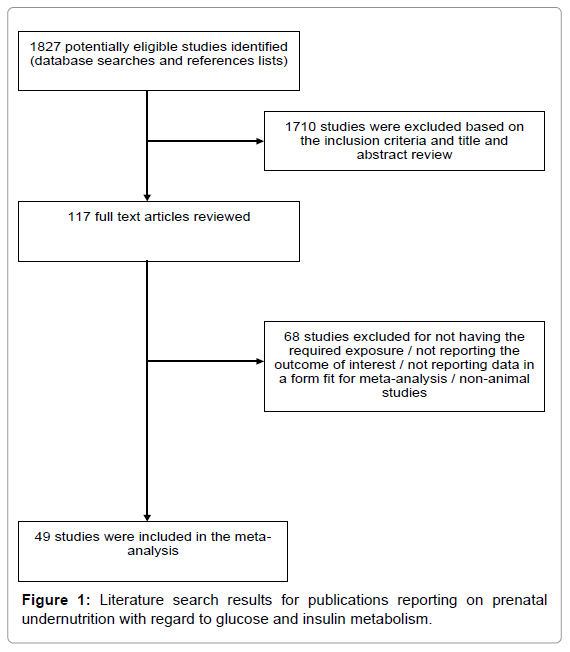 Figure 1: Literature search results for publications reporting on prenatal undernutrition with regard to glucose and insulin metabolism.

Only one study reported blinding of the investigator [34]. Randomization was reported in twenty-four studies, either randomization to the dietary regimen or randomly selecting the pups that were studied from the litters [14,15,17-24,26,28,29,31,32,34-36,39,42,44,48,50,52-54]. None of the studies reported a sample size calculation or methods for concealment of allocation. Funnel plots of all six outcomes showed symmetrical scattering of the study results around the summary estimate. There was no evidence of a small study effect or publication bias (Supplementary Figure 1).

Twenty-two primary studies provided data for meta-analysis (464 undernourished animals, 464 controls). Twenty-one studies were performed using rats [7-16,18-21,23-29], one using mice [4]. Using the random effects model we found a higher mean plasma glucose level in prenatally undernourished animals compared to the control group: a mean difference of 0.42 mmol/l (95% CI 0.07 to 0.77) (Figure 2). The results showed statistically significant heterogeneity (I2; 89%). The heterogeneity persisted even after separately pooling fasting values, stratifying for the sex of the offspring, or limiting the analysis to Wistar rats only. Offspring of low protein undernourished animals that were older than 6 weeks of age had a 0.54 mmol/l higher plasma glucose level (95%CI 0.16 to 0.92) compared to control offspring. But glucose concentrations measured at day 0 were lower in undernourished offspring compared to controls with a mean difference of -0.62 mmol/l (95% CI -1.34 to 0.11). In both cases, heterogeneity was substantial, with an I2 of 89% and 69% respectively. Data for meta-analysis were available from nineteen experimental studies. One study used a pig model [5], one used a mouse model [4], and the remaining 17 studies were performed in a rat model [7,8,10,11,13-19,21,24-26,28,29]. The meta-analysis, using data from 377 protein restricted animals and 382 controls, showed a lower mean plasma insulin level in undernourished offspring compared to control offspring, with a mean difference of 0.04 nmol/l (95% CI -0.08 to 0.00) (I2 95%) (Figure 4). The heterogeneity persisted after separately pooling animals according to species, sex or age or separately analyzing fasting values. In a series of sensitivity analysis, we evaluated the robustness of our findings by repeating the analyses a number of times, each time leaving one study out of the meta-analysis. If a study appears to be an outlier, with results very different from the rest of the studies, then its influence will become apparent, as the result without the study would be very much different from the result of the meta-analysis of all the studies. All sensitivity analyses, for each of the six outcome measures evaluated, confirmed the stability of our analysis. No influential individual study could be identified.

Although heterogeneity in all meta-analyses was significant, the results generally support the fetal origins hypothesis and show that both general and low protein undernutrition during gestation results in increased glucose and reduced insulin concentrations and beta cell mass in the offspring.

Meta-analyses of animal studies are known to show significant heterogeneity [55]. Our findings are in line with this, and we have to be cautious when interpreting the results. There are various sources that could have contributed to the heterogeneity, including the animal mode, species, type of glucose/insulin assay used, quantification method used for assessment of beta cell mass and variations in sample collection and storage, standards and quality control samples and matrix effects will all have contributed to the heterogeneity observed in our meta analyses. We have only been able to explore a few potential sources of heterogeneity, including species, age of the animals at investigation and protocol (fasted or not), and these factors only accounted for a small part of the heterogeneity.

Methodological heterogeneity was one of the major reasons for the heterogeneity observed. The methodological quality of most reported studies was suboptimal, with only one study reporting blinding of the investigators [34], and less than half of the included studies reporting randomization of the animals. None of the studies reported a sample size calculation. In contrast to human studies, randomization, blinding, sample size calculation and planned analysis were not standard. Animal studies that did not report randomization and blinding have been shown to be more likely to report a difference in study groups than studies that did use these methods [55].

The findings from animal research in this review are in line with evidence from human studies, although for ethical reasons obviously these studies cannot be carried out experimentally in humans and therefore are observational in nature. A prospective cohort study in India showed significantly lower cord blood insulin concentrations in babies born from malnourished mothers, compared to controls. In that study malnourishment was defined as a BMI of less than 17 kg/ m2; [56]. In subjects prenatally exposed to the Leningrad siege between 1941 and 1944, there was no difference in concentrations of fasting and 2 hour plasma glucose during an oral glucose tolerance test compared to unexposed subjects. In utero exposed subjects also did not have different plasma insulin concentrations or an excess of known diabetes or glucose intolerance [57].

In a recent systematic review of the evidence from animal experiments studying the effects of prenatal undernutrition on later hypertension risk, we found similar results. In general, the results supported the fetal origins hypothesis, fetal undernutrition increased blood pressure levels in the offspring. But here too, heterogeneity was considerable.

In summary, this systematic review shows that the results from animal experiments support the fetal origins hypothesis: prenatal undernutrition leads to a disturbed glucose and insulin metabolism and a decrease in beta cell mass in later life.

The present study was supported by the Netherlands Heart Foundation (grant number 2007B083). The funder played no role in the report of the review.

The authors’ responsibilities were as follows: ST, KK, BWM and TR designed the research. MV, DY, ST and RP reviewed the literature and extracted data. MV conducted the statistical analyses and wrote the manuscript. All authors contributed to the revisions of the manuscript and read and approved the final version. None of the authors had any personal or financial conflict of interest.

Copyright: © 2013 Veenendaal MVE, et al. This is an open-access article distributed under the terms of the Creative Commons Attribution License, which permits unrestricted use, distribution, and reproduction in any medium, provided the original author and source are credited.