Is There A Relationship Between Visfatin Level and Type 2 Diabetes Mellitus In Obese And Non Obese Patients?

Background: Visfatin is a newly discovered cytokine that is highly expressed in visceral fat with a direct relationship to type 2 diabetes mellitus (T2DM). The present study was conducted to demonstrate the relationship between plasma visfatin level and T2DM whether in obese or non obese patients.

Conclusion: There may be a possible role of visfatin in the Pathophysiology of insulin resistance, T2DM and obesity.

All patients and controls underwent full history taking, complete physical examination and routine biochemical analyses of blood (fasting and postprandial blood glucose level by glucose oxidase method, complete lipid profile by commercial enzymatic methods, including serum total cholesterol, serum triglycerides and serum HDL-cholesterol which was determined after precipitation of LDL and VLDL with dextran sulphate and MgCl2). LDL-cholesterol was calculated according to Friedewald formula: LDL-cholesterol equals total cholesterol minus [HDL-cholesterol plus total triglyceride/2.2] in millimole per liter in subjects with total triglyceride level < 4.5 mmol/L, the homeostasis model assessment of insulin resistance (HOMAIR) was calculated from fasting insulin and glucose by the following equation: HOMAIR = insulin (microunits per milliliter) × glucose (mmol/liter) /22.5 [8]. Fasting serum insulin [9] and visfatin levels [10] were determined by commercial enzyme immunoassay kits. For all subjects, 10 ml of peripheral venous blood was collected in clean vacutainer tube and serum was separated and divided into 2 ependorff tubes, one tube for measurement of routine tests and the other tube was stored at -70°C for further measurement of serum visfatin and insulin levels.

The demographic, clinical and biochemical characteristics of our subjects are shown in Table 1. A total of 60 patients and fourteen age and sex-matched apparently healthy volunteers were studied. Group I and II patients had significantly higher BMI than that of control subjects (p<0.01). BMI showed significant increase in Group II patients compared with group I patients (p<0.05), while insignificant difference in group III patients compared with control subjects (p>0.05). The mean fasting serum visfatin levels were found to be significantly elevated in obese non diabetic patients and obese diabetics compared with control subjects (34.61 ± 4.68; 42.55 ± 7.16 vs. 17.4 ± 3.44 ng/ml, P<0.001, respectively), and in obese diabetic patients compared with obese non diabetics (42.55 ± 7.16 vs. 34.61 ± 4.68 ng/ml, P<0.01). Meanwhile, there was no significant difference in serum visfatin levels in non obese diabetic patients compared with control subjects (23.5 ± 5 vs. 17.4 ± 3.44 ng/ml, P >0.05) (Figure 1). Thirty-eight diabetic patients were treated with oral hypoglycaemic agents alone and two cases with combined insulin and oral hypoglycemic agents. Among patients on treatment with oral hypoglycemic agents, fifteen cases were on sulfonylurea alone, five on metformin alone, fifteen on sulfonylurea and metformin, and four on sulfonylurea and thiazolidinediones. The mean serum level of visfatin in subjects receiving insulin treatment did not differ from that of patients receiving oral hypoglycemic agents. The mean serum visfatin levels of diabetic subjects on different oral hypoglycemics did not show any difference among the groups, yet the number of subjects is too small to draw any conclusion.

Table 1: Demographic, clinical and biochemical characteristics of the studied groups. 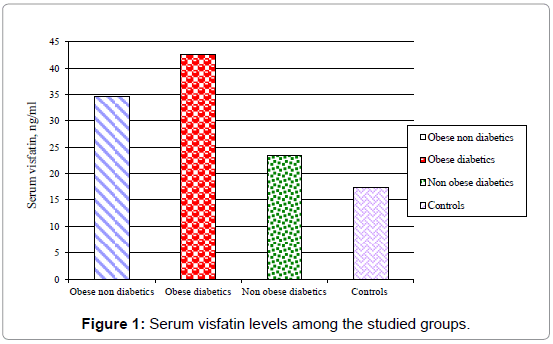 Serum visfatin concentration was positively associated with BMI (r= 0.649, p=0.002), serum insulin level (r=0.332, p=0.049) & HOMAIR (r=0.364, p=0.034), in obese diabetic patients (Table 2; Figure 2). It is known that overweight/obese patients have an abundance of adipose tissue, which is distributed mainly in the central trunk as visceral fat. Our results support the hypothesis that circulating visfatin concentrations are largely determined by body weight/obesity, probably mainly by visceral adipose tissue, implying that increased adipose tissue is the one of the sources of serum visfatin. 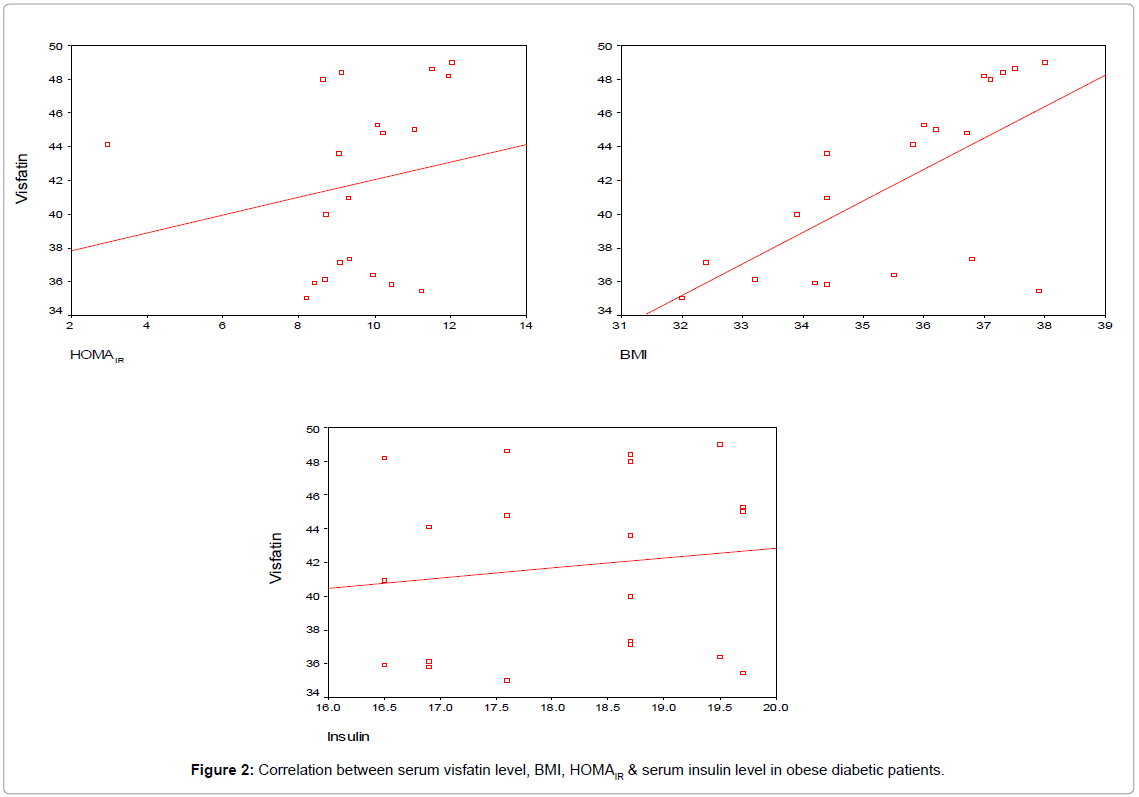 The biological mechanisms involving visfatin in the pathogenesis of T2DM are not well understood. Visfatin as an adipokine has recently been identified and named as such because of its much greater expression in visceral fat than in subcutaneous adipose tissue. In keeping with its insulin-mimetic effects, visfatin was as effective as insulin in reducing hyperglycemia in insulin-deficient diabetic mice. Visfatin was also bound to and activated insulin receptors, causing receptor phosphorylation and the activation of the downstream signaling molecules [2]. In the present study, total cholesterol, and serum triglyceride levels showed significant increase in obese non-diabetic & obese diabetic patients compared with control subjects. There was significant increase in total cholesterol and serum triglyceride levels, but not serum HDL-cholesterol and LDL-cholesterol levels in obese diabetic patients compared with obese non-diabetic patients. These results are in agreement with Derosa et al. [11] who demonstrated significant abnormal changes as regard total cholesterol, LDL-cholesterol, HDL-cholesterol and serum triglyceride in obese patients. As regarding serum insulin and HOMAIR, there was significant increase in obese non-diabetic, obese diabetic & non-obese diabetic patients compared with control subjects. Also, they showed a significant rise in obese diabetic patients compared with obese non-diabetic patients. These results are in accordance with Magni et al. [12] who reported that patients in the overweight group had higher levels of insulin and insulin resistance compared with the controls. Hyperinsulinemia and increased insulin resistance, as demonstrated by HOMAIR index, in persons with an excessive amount of adipose tissue were confirmed in numerous observations. Also, Guagnano et al. [13] reported that hyperinsulinemia and lowered concentration of HDL-cholesterol co-existing with obesity. In addition, Sakamoto et al. [14] demonstrated that BMI, fasting plasma glucose, total cholesterol, serum triglycerides fasting insulin, and HOMAIR were significantly higher in the diabetic group compared with the non-diabetic group. It is important to mention that metabolic syndrome consists of the combined presentation of multiple cardiovascular risk factors, such as central obesity, elevated triglycerides, decreased high-density lipoprotein cholesterol, hypertension and impaired glucose metabolism. For a diagnosis of metabolic syndrome, patients must fulfill at least three of these five criteria. In this study we demonstrated that visfatin levels were significantly elevated in obese patients and that visfatin is associated with abdominal obesity. Our results showed an increased visfatin concentration in T2DM and this may also support the hypothesis that visfatin is associated with impaired glucose metabolism. Furthermore, we found a significant positive correlation between visfatin concentration and BMI, serum insulin level & HOMAIR in obese diabetic patients, insulin resistance is known as the central core of metabolic syndrome. On the basis of these results, these may be possible explanations for the significance of visfatin in diagnosing metabolic syndrome. Choi et al. showed that the level of visfatin was higher in obese participants as compared with that in non-obese participants among Korean women [15]. They also showed that plasma visfatin can be lowered after body weight reduction by an exercise program, and this result also held for non-obese subjects [15]. Soon after, Araki et al. [16] reported that the plasma visfatin level was higher in the obese patients than in the controls, the visfatin correlated significantly with body weight, triglycerides (TG), insulin, and the homeostasis model assessment for insulin resistance (HOMAIR) suggested that plasma visfatin level is a specific marker for visceral fat accumulation and for insulin resistance in obese. Another studies reported that the mean serum visfatin level of subjects with metabolic syndrome was significantly higher than the mean level of subjects without metabolic syndrome (p<0.01). As the number of components of metabolic syndrome increased, the concentration of serum visfatin also increased. Visfatin concentration was positively correlated with fasting glucose level, fasting insulin level, HOMAIR, total cholesterol level and triglyceride level [17-21]. Chang YH et al. [22] found in their meta-analysis study that plasma visfatin is significantly increased in subjects diagnosed with overweight/obesity, T2DM, metabolic syndrome and cardiovascular disease. Furthermore, the results indicate that plasma visfatin is related to insulin resistance, as assessed by the homeostasis model assessment. Also, their meta-analysis confirmed an interaction between visfatin and glucose homeostasis, and suggests that this phenomenon is not prejudiced by the extent of overweight/obesity. On the contrary, other studies reported that obese subjects had significantly lower visfatin levels compared to subjects with normal body weight [23,24]. On the other hand, Kaminska et al. have not reported differences in visfatin levels between obese and lean subjects [19]. In a study by Lopez-Bermejo [25], patients with longer-standing T2DM had visfatin levels higher than in non-diabetics. Visfatin levels increased with progressive pancreatic beta-cell dysfunction suggesting that the increase in the level of visfatin is a compensatory mechanism that develops in endogenous insulin deficit in patients with longer-standing type 2 diabetes mellitus. It is becoming clear that adipose tissue is not simply a reservoir for excess nutrients but an active and dynamic organ capable of expressing several cytokines and fat-derived peptides [2]. There has been increasing evidence of the association between insulin resistance and subclinical inflammation involving cytokines derived from adipose tissue or adipocytokines [1,3,26,27]. Knowledge of how these adipose tissue-derived factors influence metabolic and cardiovascular disease has recently expanded, and growing evidence implicates adipocyte-derived factors as major regulator of insulin resistance [27,28]. Our study has a limitation of being done on a small sample sizes, so further studies on a larger scale of subjects are recommended to confirm the link between visfatin level and diagnosis of the potentially diabetics early and metabolic syndrome.

Our study revealed elevated circulating serum visfatin in type 2 diabetics and obese subjects and these results were supported by a significant association between visfatin and insulin resistance, which indicates that visfatin may play a role in the Pathophysiology of insulin resistance, T2DM and obesity.

Copyright: © 2012 El-Shafey EM, et al. This is an open-access article distributed under the terms of the Creative Commons Attribution License, which permits unrestricted use, distribution, and reproduction in any medium, provided the original author and source are credited.