Cervical cancer is one of the leading causes of morbidity and mortality amongst the gynecological cancers worldwide. It is the second most common cancer worldwide in women over 15 years of age and every two minutes a woman dies of cervical cancer [1]. Sexually active women may be at risk for cervical cancer or the early stages of the disease irrespective of age and lifestyle. In today’s world, cervical cancer is primarily a disease found in low-income countries. Of the nearly 500,000 new cases that occur annually, 83% are in the developing world, as are 85% of the 274,000 deaths associated with cervical cancer [2].

In less developed countries (LDCs), cervical cancer is the leading cause of cancer-related death. It is a disease of the female reproductive organs, with the burden of it borne disproportionately by women in their perimenopausal years: peak cancer incidence occurs at age 50-54. Until recently, cervical cancer could only be prevented by screening and treating all women for cancers and pre-cancers. Because the disease is often silent (“asymptomatic”) until it is quite advanced, and because of broader gaps in women’s health services, women die from the disease. Some seek and receive treatment late – others do not receive any treatment, and still others die without ever knowing their diagnosis. Many of these deaths are preventable, as is the physical pain, discomfort and social stigma that often come with advanced disease [3].

The purpose of this study was to assess the knowledge, preventive practice and associated factors of female nurses’ towards cervical cancer in government hospitals of Addis Ababa, Ethiopia.

According to the Black Lion Hospital radiotherapy unit in Ethiopia, women make up 70 per cent of the total cancer patient, among which cervical cancer contribute 35 percent followed by breast cancer (18 per cent) and head and neck cancer (13 and 14 percent respectively) [7].

Nurses constitute the group of health workers who can provide accurate information to the public on cervical cancer, and were the target for this study for two reasons: a) they were expected to have higher knowledge about cervical cancer than counterparts in other professions or lay women as they are health professionals; b) nurses have an important role in the education of women in Ethiopia because women feel comfortable asking them about the symptoms and screening for gender-specific cancers such as breast and gynecological cancers. Thus, they can constitute a model of health promotion for women, and serve a meaningful role in the education. Nurses can have a major influence on the behavior of our women, but they need to be knowledgeable themselves about cervical cancer and the importance of early detection through screening, to combat this emergent public health problem.

A cross-sectional quantitative descriptive study design was used. Study participants were female nurses working in the government hospitals in Addis Ababa. Sample size was determined using single population proportion formula with a 95% confidence interval, a precision of 5%, and an assumed knowledge and preventive practice of cervical cancer 50%( 0.5) to get a maximum sample size as there were no previous study conducted similar to this study. The calculated sample size was 250 by adding 10% non-response rate and incomplete data the final sample size became 275 female nurses. Government hospitals (Tikur Anbesa, St. Paul, Yekatit 12 and Gandhi memorial hospitals) were selected by simple random sampling technique. Proportional to size allocation was used to give equal chance to each hospital and then simple random sampling technique was utilized to reach each study unit. Data were collected using a pre-tested, structured, and selfadministered questionnaire

Data entry and validation was done in EPI info version 3.5.1 statistical software. Data were then exported to SPSS windows version 16.0 where frequencies and statistical analyzes were run. The outcome variables of the study [knowledge and preventive practices] were binary categorical variables (knowledgeable, not knowledgeable and good practice, poor practice). A score less than the median were categorized as not knowledgeable and the value greater than or equal to the median was categorized as knowledgeable. Nurses who reported at least one of the preventive practices (HPV vaccination, pelvic examination and Pap smear test) for cervical cancer prevention were considered as having good practice. Bivariate analysis was used primarily to check for the association of independent variable with the dependent. Variables found to related to the outcome of knowledge and preventive practice, at p value <0.2, were entered in to multiple logistic regression model for controlling the possible effect of confounders. Odds ratios with 95%CI are reported for significant variables related to the outcomes of knowledge and preventive practice.

We obtained ethical approval from Addis Ababa University College of Health Sciences Department of Nursing and Midwifery research review committee. Written informed consent was obtained from the respondents, clearly stating potential risks and benefits of the study and seeking their voluntary participation.

Out of the 275 questionnaires distributed to female nurses working in the selected hospitals during the study period, 266 agreed to participate in the study but six of the questionnaires were excluded from the study because of missing data, for a final analytic sample size of (response rate of 94.5%). The majority of the respondents 120 (46.2%) were from Tikur Anbesa hospital, 60(23%) and from St. Paul’s 54 (21%), and the smallest number 26 (10%) were from Gandhi memorial hospital.

Socio-demographic characteristics of the study subjects

History of cervical cancer and other related factors

*Percent may exceed 100% as multiple answers are possible

Table 2: Distribution of Study Subjects by History of Cervical Cancer and Other Related Factors in the Selected Government Hospitals in Addis Ababa, Ethiopia, March 2011.

Distribution of knowledge score on cervical cancer risk factors, main presenting symptoms, treatment options and preventive measures amongst female nurses’ working in the selected government hospitals in Addis Ababa ranges from 0-15. The mean score of knowledge test was 7.9 (SD=2.6). The median score was 8 and 158 nurses scored 8 and above (Figure 1). 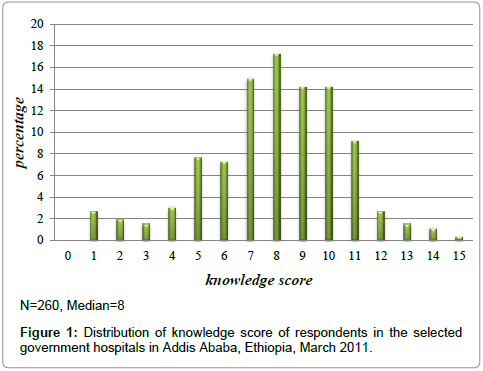 Source of information for cervical cancer

Nurses were asked about the source of information regarding cervical cancer and they revealed that regular courses in nursing were the predominant source (75.4%) followed by health professionals/ work/colleague (47.0%), books/magazines (40%), radio/television (30.8%), training (20%), and friends/relatives (14.6%).

Knowledge on symptoms of cervical cancer

Just under half the sample (46.9%) respondents correctly identified colposcopy as investigation of abnormal cells, with 27.3% being unsure. In relation to Pap smear, 86.5% of nurses had heard about the test. Only 28.5% of the respondents reported at age 21or within three years of the first time of sexual intercourse as when a woman start being tested; 28.5% gave an incorrect answer for the recommended frequency of Pap smear test such as every 10 years and 22 (8.5%) was uncertain.

Pap smear test and HPV vaccine: Regarding Pap smear test, of those who had heard about the test, only 14.6% had the test. Half (50%) of these nurses had the test once in their life, 31.6% had two times and only 18.4% had undergone three times and above. Among those, who knew about Pap smear test (n=225), 61% did not do the test mainly because of personal factors such as virginity, fear of the test, cultural or religious and not being ill. Factors related to health care workers, partners of the individuals and access to health facilities also were reasons not having a test.

Amazingly while more than half of the respondents knew HPV is a cause for cervical cancer only 6.9% had gone for HPV vaccine. Nurses were also asked what they do if they developed pain or bleeding after intercourse; (86.2% reported that they would visit health institutions, 18.8% religious places; 1.9% preferred traditional medicine.

A Pap test and pelvic examination are recommended as important parts of a woman’s routine health care because they can detect abnormalities that may lead to invasive cancer of the cervix. These abnormalities can be treated before cancer develops. In some countries annual pelvic examination is regarded as an important routine ‘healthcheck’ [14]. However our study revealed that only few nurses (32.3%) had under gone pelvic exam in their life-time. Although having this exam may increase the chance of early detection of the disease especially for low resource countries, only 8.5% of these nurses reported screening as the reason for their pelvic exam. The finding is consistent with the findings of the study conducted by Gakidou et al. [15] who examined cervical cancer screening coverage in 57 countries, and reported that 90% of women in Ethiopia have never had a pelvic examination. The findings of our study has also indicated that hundred fifty eight (60.8%) respondents had knowledge of cervical cancer but only 57 (21.9%) reported practicing prevention of cervical cancer. These low numbers may be associated with the low health care utilization and health care seeking behavior, and the cultural influence where most women are not comfortable undergoing pelvic examination even when it is required.

Most invasive cancers of the cervix can be prevented if women have Pap tests regularly. The general recommendation for Pap smear is women should have Pap smear once a year 3 years after the initiation of sexual intercourse [16]. In our study although 86.5% of the sample population had heard about Pap smear test only 14.6% had had it, which is consistent with a study done in South Eastern Nigeria, where knowledge of cervical cancer screening services is high while uptake rate is terribly poor [17]. However this result is inconsistent with other studies where 30% reported having a pap-smear test (Iran) [18].

In addition, with a study of Izmeir concerning practice of the nurses, 53.6% did not have a Pap smear. Also specific to knowing about Pap test and practicing it as mentioned in a study at Pamukkale, 50.4% of the nurses who knew about Pap smear did not have the test [10]. The difference is not surprising because Pap smear is widely available as a screening tool in Shiraz – Iran, Izmeir and Turkey and there is also a national pap smear policy whereas Pap test is available only in some health institutions in Ethiopia.

Knowledge about when to initiate Pap testing at age 21 or within 3 years of first sexual intercourse was also low in our study. Hundred thirty six (52.3%) of them gave correct answer for the recommended frequency of Pap smear test, which is annually, compared to the study in Pamukkale, where 84.8% of the respondents believed that it should be done yearly, but 76.8% did not know that it should be done 3 years after the onset of sexual activity [10]. Respondents in our study may have scored lower because of lack of education about the test widespread unavailability of the test.

In many studies, different socio demographic variables have shown to affect the knowledge of cervical cancer. In this study, nurses who had a history of cervical cancer in their family and with degree and higher education were 3.8 times and 2 times more knowledgeable.

In conclusion knowledge of female nurses working in the selected government hospitals was high but their practice of preventive measures (pelvic exam, Pap smear test and HPV vaccine) of cervical cancer was poor. Our results highlight the need to further enlighten this group who are expected to play a major role in mobilizing the local communities, Nurses must receive consistent education about cervical cancer so that they can keep on playing their role in saving themselves and their clients by early stage of the disease, thus reducing the morbidity and mortality associated with invasive cervical cancer. Ministry of Health should work with other organizations to make cost effective screening services available to the public at all health care settings.

Our heartfelt thanks go to Addis Ababa University for financial support and all participant nurses for their commitment in responding to the questionnaire, and to Dr. Usha Menon at the The Ohio State University for editorial assistance with this manuscript.

Copyright: © 2015 Gebrie MH, et al. This is an open-access article distributed under the terms of the Creative Commons Attribution License, which permits unrestricted use, distribution, and reproduction in any medium, provided the original author and source are credited. 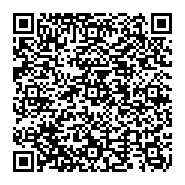