Background: Morbid obesity is a pathologic condition associated to an increased incidence of several chronic conditions associated to increased risk of mortality. Erythrocyte fatty acid composition has been candidate as a biomarker of oxidative stress and consequently on the rate of aging and ultimately lifespan. To our knowledge, no study has investigated the total spectrum of lipid composition of erythrocyte membranes from obese individuals. The aim of this study was to compare the fatty acid composition of erythrocyte membranes derived from morbidly obese patients with healthy matched controls and long-living descendants. Methods: Gas chromatography was employed to determine fatty acid percentage of erythrocyte membranes from investigated groups. Results: Erythrocyte membranes from obese subjects had significantly lower percentage of monounsaturated fatty acids (16.0 ± 0.8 vs. 23.0 ± 4.5, p<0.01) and total trans fatty acid (0.2 ± 0.1 vs. 1.3 ± 1.2, p<0.001) than controls. Obese fatty acid profiles showed increased percent of total polyunsaturated fatty acid (36.5 ± 1.4 vs. 27.3 ± 10.9, p<0.001), polyunsaturated fatty acid n-3 (5.2 ± 0.9 vs. 2.6 ± 1.8, p <0.001) and n-6 (31.3 ± 1.7 vs. 25.0 ± 10.1, p<0.001). Interestingly, when obese fatty acid profiles are compared with long-living descendants, the former show opposite trends in the percentages of the main saturated and unsaturated residues of membrane phospholipids compared with nonagenarian offspring. Conclusion: This study shows that the erythrocyte membranes fatty acid composition of obese subjects differs from general population in a way opposite to the long-living descendants. If confirmed by further investigations, the fatty acid equilibration may become an additional target in the multidisciplinary strategy aimed to treat the obesity epidemic.

Life-insurance data and epidemiological studies confirm that increasing degrees of overweight and obesity are important predictors of decreased longevity [1]. Morbid obesity is a pathologic condition associated to an increased incidence of several chronic conditions, including noninsulin-dependent diabetes mellitus, hypertension, cardiovascular disease, obstructive sleep apnea, and all-cause mortality [2]. There is a linear relationship between BMI above 30 and the incidence of these pathologic conditions [3].

Erythrocyte fatty acid composition has been validated as a reliable biomarker of oxidative stress and consequently on the rate of aging and ultimately lifespan [4,5]. We have reported an association between a specific fatty acid profile of blood constituents and longevity [6]. In detail, we have found that a combination of high palmitoleic acid (C16:1), low polyunsaturated fatty acids (PUFA) (especially omega 6) and high endogenous trans fatty acids (TFA), that reflect a radical stress activity, are associated with longevity [6]. Elizondo et al. demonstrated a correlation between liver and erythrocyte phospholipids PUFA from patients with obese non-alcoholic fatty liver disease and proposed the fatty acid in erythrocytes membranes as reliable biomarker of derangements in liver lipid metabolism in obese patients [7]. Petrescu et al. comparing the uptake kinetics of 9,10-[3H] oleic acid by omental adipocytes isolated from obese and non-obese patients undergoing laparoscopic procedures, observed that in the obese subjects long-chain fatty acid (LCFA) uptake was up-regulated, suggesting that alterations in LCFA partitioning may contribute to the obese phenotype [8].

However, to our knowledge no study has investigated the total spectrum of the lipid composition of erythrocyte membranes from obese individuals in an attempt to establish a relationship between obesity and the associated pathologic conditions. Primary endpoint of this study was to compare the lipid composition in terms of the percentage content of various fatty acids of erythrocyte membranes derived from morbid obese patients selected to bariatric surgery versus healthy matched controls.

Experimental subjects: A total of 21 morbid obese adult patients (12 women; median age, 46 years [23-64]) were enrolled for the fatty acid profile study after that the institutional review board approved the clinical protocol and all subjects involved signed an informed consent form. This study was conducted in accordance with the ethical principles that have their origins in the Declaration of Helsinki and approved by the local institutional review board. Before subjects entered the study, specific informed consent was obtained from each.

The subjects were pooled from a group of consecutive patients selected for a bariatric procedure at the Interuniversity Center for Obesity and Eating Disorder (CISRO), according to the interdisciplinary European guidelines for surgery for morbid obesity [9].

At entry, all patients underwent a clinical evaluation to determine the presence and severity of associated medical conditions according to pre-specified primary and secondary outcome measures. Dietary history, food habits, and previous weight loss efforts were accurately evaluated by means of an interview. All participants completed a standardized dietary support program for 4 months before being enrolled in the study, as described elsewhere [10]. In brief, at the first visit, patients were instructed by the dietician on how to fill in their food and activity diaries. After a week, they were given a low calorie diet, which was tailored to each patient’s resting energy expenditure, food and activity diary, and metabolic data. The patients were instructed to gradually increase their physical activity by walking outdoors up to 30 min a day. Each patient was seen on a biweekly basis. Initial assessment included anthropometric measurements, hematobiochemical examination, homeostasis model assessment, analysis of body composition, as previously described [10].

Participants fasted overnight and then were weighed barefoot and in light clothing to the nearest 0.1 kg. Height was measured using a fixed wall stadiometer; height and weight were recorded and BMI (kg/ m2) was calculated. Body composition was assessed by bioimpedance analysis (BIA) (Tanita TBF-300MA Body Composition Analyzer, Tanita Corporation, Tokyo, Japan). Measurements were performed at an ambient temperature of 22-24°C after voiding and after being in the supine position for 20 min. Height, sex, and age were entered manually; weight was recorded automatically with 0.5 kg as an adjustment for weight of clothes [10,11]. The Tanita software uses in-built prediction equations to estimate fat mass (FM) and fat-free mass (FFM). All patients underwent a comprehensive preoperative evaluation conducted by a behaviourist with expertise in bariatric patient management. This assessment included personal and social history, history of psychiatric problems, current living situation, and support system. None of the participants had any evidence of psychiatric diseases. Patients were considered eligible after evaluation of esophagogastroduodenoscopy, spirometry, and abdominal ultrasound. Patients with type 2 diabetes and hypertension were excluded [10].

A total of 30 healthy control subjects (15 women, median age 48 [22-62]) were enrolled for the fatty acids profile. The control group included healthy normal weight subjects (mean BMI 21.5 ± 3 [18,5- 25]) in absence of any known medical condition or pathology. There is no reason to believe that there was any sort of bias in favour of a specific diet or physical activity during the recruitment of the group [6].

Venous blood samples were collected into EDTA vacutainers and centrifuged immediately after collection at 1000 g for 10 min at 4°C. Supernatant plasma was then removed. Separated erythrocytes were suspended in pure water and the mixture vortexed and subsequently centrifuged at 14,000 g for 30 min at 4°C to separate membrane pellets from the mixture.

Bligh and Dyer [12] performed phospholipids extraction from pellets according to method. The total phospholipid fraction was treated with KOH/MeOH solution (0.5 M) for10 min at room temperature, and fatty acid methyl esters (FAME) were subsequently extracted with n-hexane. GC analysis of released fatty acids showed separation of all fatty acids and their isomers. This was confirmed by comparison with commercially available references and with a library of geometrical trans monounsaturated fatty acids (MUFA) and PUFA obtained by thiyl radical-catalyzed reaction of naturally occurring lipids. This technique has been used by others [13].

Analysis of the erythrocyte membranes’ fatty acid components was performed by evaluating the fatty acid percentages and correlating the percentages of the main saturated and unsaturated residues of membrane phospholipids, together with the sums of saturated fatty acids (SFA), MUFA, and PUFA n-3 and n-6 residues and some indicative ratios (SFA/MUFA, C16:1/C16:0; C18:1/C18:0). In addition, the conditions for analytical detection allowed some trans-fatty acid isomers to be evaluated, which are relative to the isomerization of fatty acids in cell membranes due to an endogenous free radical process.

The cohort patients in the present study exhibited a significant difference of BMI, FM and FFM when compared to control group, as reported in Table 1.

There were differences in the fatty acid composition of erythrocyte membranes derived from morbid obese versus matched controls (Table 2).

A different composition of lipids types (i.e. SFA, MUFA and PUFA), as constituents of the cellular membrane, influences its fluidity and permeability and consequently the disease susceptibility [15].

Data from our study clearly demonstrated that in the human obese population the ratio of MUFA and PUFA is sturdily changed. This was due to a parallel reduction of MUFA (especially C16:1 and C18:1) and increase of PUFA. This disequilibrium of polyunsaturated fatty acid metabolism seems to contribute to an excessive adipose tissue development and represents itself an emerging risk factor for obesity [16]. This is consistent with the diet-induced reduction of pro-inflammatory fatty acids profile, we recently reported in coeliac patients [17]. Indeed, in obese patients the significantly higher levels of C20:3 (p=0.008) and C20:4 n-6 (p=0.003), both PUFA, in erythrocyte membranes of morbid obese group induce a greater membrane peroxidizability. In fact, the PI and UI were found significantly increased in obese subjects compared to controls (p<0.001). In addition, there was a significantly lower level of trans C18:1 n-9 in the erythrocyte membranes of obese compared with controls (p<0.001), which may indicate a lower exposition to radical stress.

The lower content of palmitoleic acid and oleic acid may compensate for the increased permeability created by the lower percentage of TFA and possibly for the major content in PUFA in erythrocyte membranes [18]. Indeed, the inverse relationship between polyene-containing lipid molecular species and monoene counterparts has been recently documented in cultured cells [19]. 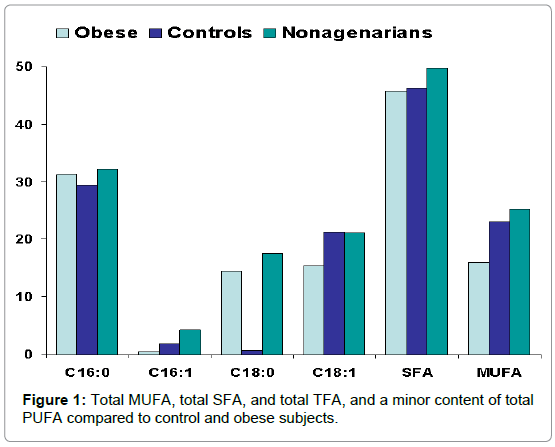 These comparisons underline the importance of membrane fatty acids in determining the risk of obesity associated disease. If confirmed by further investigations, the fatty acid equilibration may become an additional target in the multidisciplinary strategy aimed to treat the obesity epidemic.

The authors declare that they have no conflict of interest, financial ties or funding source to disclose.

Copyright: © 2015 del Genio G, et al. This is an open-access article distributed under the terms of the Creative Commons Attribution License, which permits unrestricted use, distribution, and reproduction in any medium, provided the original author and source are credited. 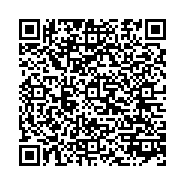