The most commonly used laboratory diagnostic procedures involve the analysis of cellular and chemical constituents of blood. Other biological fluids are utilized for the diagnosis of disease. Saliva offers some distinctive advantages. Whole saliva can be collected non-invasively and by individuals with limited training. No special equipment is needed for collection of the fluid. Diagnosis of disease via the analysis of saliva is potentially valuable for children and older adults, since collection of the fluid is associated with fewer compliance problems as compared with the collection of blood. Further analysis of saliva may provide a cost-effective approach for the screening of large populations. Saliva can be considered as gland-specific saliva and whole saliva. Gland-specific saliva can be collected directly from individual salivary glands: parotid, Submandibular, sublingual, and minor salivary glands. Secretions from both the Submandibular and sublingual salivary glands enter the oral cavity through Wharton's duct and thus the separate collection of saliva from each of these two glands is difficult [1]. The collection and evaluation of the secretions from the individual salivary glands are primarily useful for the detection of gland-specific pathology i.e. infection and obstruction. However, whole saliva is most frequently studied when salivary analysis is used for the evaluation of systemic disorders. Whole saliva (mixed saliva) is a mixture of oral fluids and includes secretions from both the major and minor salivary glands. Saliva in addition to several constituents of non-salivary origin, such as GCF, gingival crevicular fluid expectorated bronchial and nasal secretions, serum and blood derivatives from oral wounds, bacteria and bacterial products, viruses and fungi, desquamated epithelial cells, other cellular components and food debris [2-4] can be collected with or without stimulation. Saliva is collected by gustatory stimulation i.e. application of citric acid on the subject's tongue [5]. Stimulation obviously affects the quantity of saliva; however, the concentrations of some constituents and the pH of the fluid are also affected. Unstimulated saliva is collected without exogenous gustatory, masticatory or mechanical stimulation. Unstimulated salivary flow rate is most affected by the degree of hydration but also by olfactory stimulation, exposure to light, body positioning and seasonal as well as diurnal factors. The best two ways to collect whole saliva are the draining method in which saliva is allowed to drip off the lower lip. Another one is spitting method in which the subject spits saliva into a test tube [1]. Different reagents are used to determine the content of saliva. Molisch test gives a positive result of purple colour that reveals presence of carbohydrates. Small amounts of organic nonprotein compounds, uric acid, bilirubin and creatinine can be detected in saliva. Saliva moreover contains glucose, amino acids, lipids like cholesterol and mono/diglycerides of fatty acid [6] saliva may be useful for the diagnosis of hereditary disorders, autoimmune diseases, malignant and infectious diseases, and endocrine disorders, as well as in the assessment of therapeutic levels of drugs and the monitoring of illicit drug use [7].

This study was conducted in Diabetes Care and Research Center of S.P. Medical College, Bikaner. Eighty patients were randomly selected for this study. A detailed history of each patient was obtained regarding the age, sex, duration of diabetes, associated risk factors, family history and any associated illness. The quantitative estimation of FPG, fasting plasma glucose and FSG, fasting saliva glucose was done by glucose oxidase method using enzymatic kit GOD-POD, glucose oxidaseperoxidase.

The patients were given detailed information about the collection protocol. They were instructed to exclude brushing teeth before the collection and to avoid food and fluid (apart from water) ingestion or chewing gum for at least 30 minutes before collection and to rinse the mouth with water (preferably distilled). Saliva was collected in clean sterile containers by spitting method.

Principle of the method: Glucose oxidase (GOD) catalyses the oxidation of glucose to gluconic acid. The formed hydrogen peroxide (H2O2) is detected by a chromogenic oxygen acceptor phenol, 4-AP,4- aminophenazone in the presence of POD, peroxidase.

The red colored complex quinoneimine formed was measured colorimetrically and the intensity. Of the colour formed was directly proportional to the concentration of glucose in the sample.

Table 1: Comparison of diabetic and nondiabeteic in FPG and FSG with reference to age.

In each age group difference between mean FPG and FSG values of nondiabetic subjects were statistically significant (Table 2).

The similar results were observed when mean FPG and FSG values of diabetic subjects were compared (Table 3). 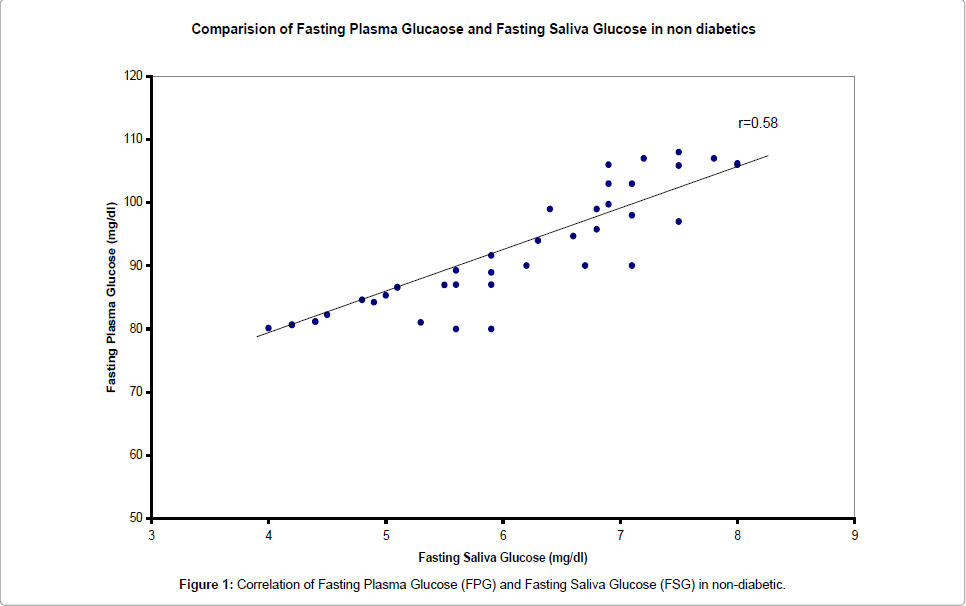 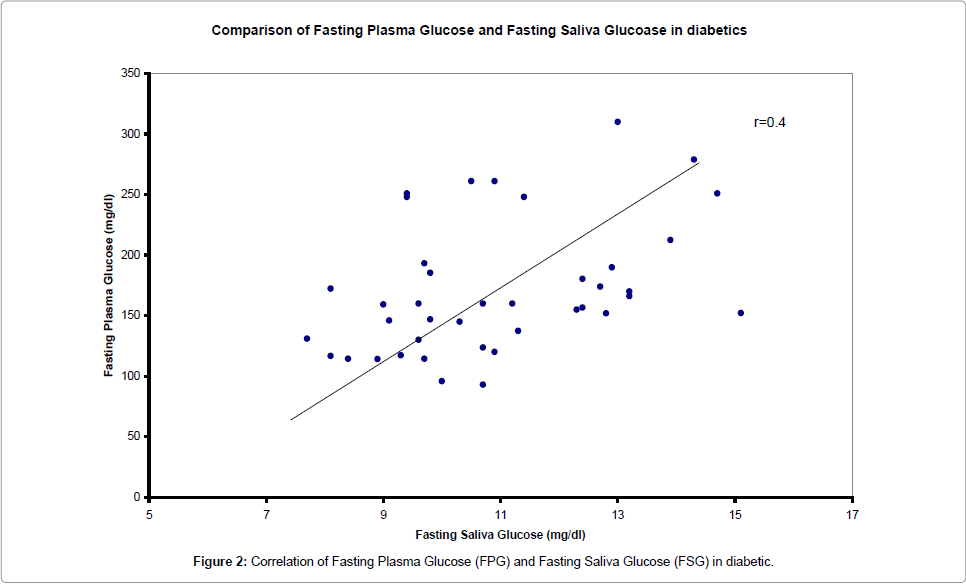 Diabetes is globally wide spread disease. Various diagnostic devices are available in the market to measure the blood glucose level. However, in available products blood is taken as diagnostic body fluid. There a necessity arises to establish a noninvasive procedure to determine the blood glucose level without taking blood. Keeping the above in view, the present study was aimed at estimation of blood and salivary glucose level in diabetic and non diabetic subjects. Saliva is a wonderful marker of early disease detection that leads to more effective treatment, risk assessment for estimation of glucose level and a simple, non invasive alternative to blood and urine tests. If a glucose level measuring procedure is developed that can monitor glucose level noninvasively, it become make early detection of diabetic mellitus possible. More research is required for defining its medical use in future.

In present study, diabetic and non diabetic subjects were divided in subgroups regarding their age. When the mean values of fasting saliva glucose and fasting blood glucose were compared for non diabetic and diabetic, the difference was found statistically significant in all subgroups expect two. From these findings it is believed that migration of glucose into saliva is affected by diabetes mellitus.

In an early study, conducted to determine whether glucose tolerance curves for parotid saliva of diabetics were different from those for non-diabetics, the results were in similar direction with those of present one. Glucose concentrations in parotid secretion varied directly with plasma concentrations for each subject but at a much lower order of magnitude. Average glucose concentrations in parotid saliva for diabetic subjects were found slightly higher at each time period than those for non-diabetic subjects [8].

The salivary glucose concentration was observed lower during the period of better metabolic control in patients with diabetes mellitus in an earlier study [9].

One researcher advocated that in well-controlled individuals with altered glucose metabolism, salivary gland function is not significantly impaired [13].

Results obtained from present study are in accordance with the previous study where the influence of different salivary glands to the correlation between BGL and SGL was examined [14]. Submandibular and sublingual saliva and parotid saliva was collected and OGTT, oral glucose tolerance test was carried out to investigate the time-course changes in BGL and SGL of six normal subjects. Submandibular and sublingual saliva of normal and diabetic subjects was collected in order to examine the changes of SGL by diabetic mellitus. Distinct difference was observed by the kinds of salivary glands in the correlation coefficients.

A study carried out in last few years revealed that the salivary samples of the non-diabetic control subjects did not show the presence of glucose even in the slightest concentrations, while the samples obtained from the diabetics showed significant concentrations of glucose in the saliva [15]. While recent study conducted to determine the unstimulated whole saliva biochemical parameters in healthy dental students, showed 0.75 ± 0.44 (mmol/l) and 0.73 ± 0.47 (mmol/l) glucose concentrations in male and female students respectively [16].

No doubt, there is limitation of the study that a lot of factors influence the secretion of saliva and constituents of saliva. Hence, the technique we adopt still requires validation in large number of patients.

Results of this study indicate towards correlation between fasting saliva glucose and fasting plasma glucose values in diabetics and non diabetics. It indicates that saliva glucose level is applicable to use as an index for diabetes mellitus.

Outcome of present study clearly depicts a correlation between fasting plasma glucose and fasting saliva glucose of diabetics. It can be concluded that distinct difference was observed between normal and diabetic subjects suggesting that monitoring of saliva glucose level can be used as an index of diabetes mellitus. With further studies on the correlation between diabetic mellitus and SGL, it is believed that not only noninvasive BGL estimation becomes possible, but also early detection of diabetes mellitus.

Copyright: © 2013 Agrawal RP, et al. This is an open-access article distributed under the terms of the Creative Commons Attribution License, which permits unrestricted use, distribution, and reproduction in any medium, provided the original author and source are credited. 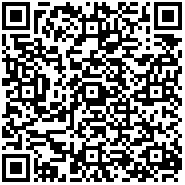