Background: Impaired glucose tolerance, a risk factor for the development of type 2 diabetes, has a very high prevalence in obese subjects. This study aims to explore the contributions of changes in weight, physical activity (PA), sleep efficiency (SE) and excessive daytime sleepiness (EDS) to changes in glucose tolerance in severely obese subjects during a commercial lifestyle modification programme.

Conclusion: We conclude that this commercial lifestyle modification programme significantly reduced weight, waist circumference, %body fat and fat mass and improved glucose tolerance after 3 and 6 months of treatment. The improvement in glucose tolerance was partly explained by the changes in weight and PA, but not by SE or EDS. This study reveals that severely obese subjects benefit from an increase in physical activity independent of weight loss with regard to improvements in glucose tolerance.

Overweight and obesity present a serious health risk, by increasing the risk of several diseases like type 2 diabetes mellitus and cardiovascular disease [1-3]. Reducing the risk of these co-morbidities and maintaining clinically meaningful weight loss should be the goal of any obesity treatment programme. Obesity treatment can consist of an increase in physical activity, reduction of energy intake and/or more healthy eating habits, behavioural change, pharmacological treatment, surgery or a combination of these methods [2-4].

Impaired glucose tolerance, a risk factor for the development of type 2 diabetes, has a high prevalence in obese subjects [5,6]. Weight loss, be it by bariatric surgery or by more conservative methods, has been shown to be associated with improvements in glucose tolerance in obese individuals [7-9]. In addition, it is well-known that exercise training may improve insulin sensitivity and glucose tolerance [10]. Research on this topic has primarily been done in heterogeneous groups, and studies specifically in obese subjects, and even more so in severe obesity, are scarce [11]. In recent years, sleep efficiency (SE) and excessive daytime sleepiness (EDS) have been shown to be associated with both glucose tolerance and obesity [12-15]. But a clear cause-effect relationship has not yet been established.

The aim of the present study was to explore the independent contributions of changes in weight, physical activity, sleep efficiency and EDS to changes in glucose tolerance in obese subjects during treatment in a commercial lifestyle modification programme.

60 subjects from a local commercial obesity treatment centre (CO-EUR, Heerlen, The Netherlands) were recruited. Subjects were at least 18 years old and had a BMI >30 kg/m2. Insulin-dependent diabetics and subjects that were not able to participate in the physical activity programme were excluded. The study protocol and informed consent document were approved by the Medical Ethical Committee of Maastricht. All subjects gave written informed consent before being enrolled into the study.

This study was a longitudinal observational study. The researchers did not intervene in the treatment programme performed at the obesity treatment centre. At the start (intake) of the treatment in the obesity treatment centre and after 3 and 6 months of treatment, we performed an oral glucose tolerance test (OGTT), a 6-day physical activity (PA) and sleep measurement and we measured weight, height, waist circumference (WC), percentage body fat (%BF) and fat mass (FM). Subjects filled out the Epworth Sleepiness Scale (ESS) at intake and at 3 and 6 months.

Physical activity: Physical activity was measured during 6 days at each time point. For this measurement we used a uni-axial accelerometric device: the Sensewear Pro 2 Armband (HealthWear Bodymedia, Pittsburgh, PA). The Sensewear Pro 2 armband was positioned around the right upper arm and worn 24 hours per day except during bathing or water activities. Physical activity was described as a minimum of 2 consecutive minutes at ≥ 3 MET (1 MET (Metabolic Equivalent Task) is the Resting Metabolic Rate (RMR) obtained during quiet sitting. MET values of activities are multiples of RMR and range from 0.9 (sleeping) to 23 (running at 22.5 km/h or a 4:17 mile pace) [17].

Sleep efficiency: The Sensewear Pro 2 Armband measures sleep efficiency (SE) by calculating sleep time as percentage of lying down time. Sleep/wake is assessed per minute. In a recent study by O’Driscoll, the authors compared the Sensewear Pro 3 with polysomnography (PSG). They conclude that the Sensewear was reliable for determining sleep, but was not reliable for determining wakefulness. This reduces its ability to determine sleep versus wake when SE decreases and thus the SE measurement is less reliable than PSG [18].

Epworth sleepiness scale: The Epworth Sleepiness Scale (ESS) [19] is a simple questionnaire consisting of 8 questions on how likely a person is to fall asleep in 8 different situations. These questions generate a numerical score from zero (0) to 24. A score below 10 indicates that the person has an average daytime sleep propensity, a score of ten or higher indicates an above normal sleep propensity, which may for instance be related to the presence of sleep apnea.

All subjects were enrolled in the commercial obesity treatment programme. This programme consists of an 18-month multidisciplinary programme targeting lifestyle modification. The programme includes a physical activity programme, psychological counseling and nutritional advice to promote a healthy lifestyle. For the physical activity part there is one group sport session (Nordic walking, swimming or medical training therapy) a week and the subjects are encouraged to implement two additional exercise sessions in their weekly routine. The psychological and nutritional group meetings are scheduled once a week initially, with individual meetings every two to four weeks, depending on the individual needs. In the course of the program the number and frequency of the group meetings is redefined, based on the individual subject’s requirements and developments.

To analyze the effect of treatment on glucose tolerance, body weight and composition, physical activity and sleep, repeated measures ANCOVA was used. Baseline values were compared to the values after 3 and 6 months of treatment. An explorative stepwise multiple linear regression analysis was performed to elucidate the contributions of changes in body weight, physical activity, sleep efficiency and EDS to the change in glucose tolerance after 6 months. The significance threshold was set at p ≤ 0.05.

At the 6 months measurement there were only 33 subjects left from the initial 60 (Figure 1). The changes over the 3 and 6 months period will be reported for the subjects that did not drop out of the study (N=33). 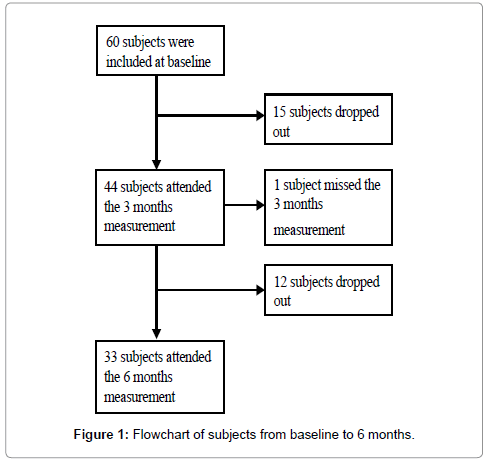 Figure 1: Flowchart of subjects from baseline to 6 months.

Mean ± SD values of the tested variables at baseline can be found in table 1. No significant differences between completers and drop-outs were found at baseline.

Table 1: Baseline characteristics and changes from baseline after 3 and 6 months of treatment (mean (CI, confidence interval)).

To explore the independent contributions of the changes in weight, PA, SE and EDS to the changes in 2 h glucose concentration over the 6 months treatment period, a backward stepwise multiple linear regression analysis was performed.

This resulted in the following final model: 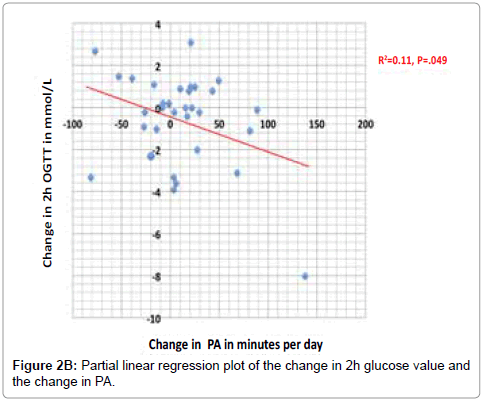 At baseline, 47% of the subjects had a BMI >40 kg/m2 which makes them eligible for bariatric surgery [20]. 40% had impaired glucose tolerance (IGT). SE at baseline was comparable with reports from other studies in diabetics [12] and moderately obese [15] subjects, with 41% of our subjects having a SE in the normal range of >85%. On average, the subjects in our study performed moderate to high intensity (>3 MET) PA for 69 min/day. This is considerably less than the moderately obese (BMI approximately 32 kg/m2) subjects in a recent study by Scheers et al. [21]. These subjects performed 127 min/day of moderate to high intensity PA [21].

Average percentage weight loss during the first 3 months is higher in our study (7.3%) compared to large population studies of other commercial treatment programmes (4-5%) [22-25]. Percentage weight loss at 6 months also exceeds previous reports of other commercial treatment programmes (9.4% vs. 4.6 to 5.1%) [26,27]. 31% of the initial 13 IGT subjects transitioned to NGT during the 6 months treatment.

Physical activity (>3 MET) increased with 30 min/day in the first 3 months, but at 6 months this increase was only 9 min/day compared to baseline. When looking at the advice given by the treatment centre (1 obligatory and 2 self-implemented exercise sessions per week for an approximate total of 180 minutes), the increase of 30 min/ day in the first 3 months is just above the given advice (180 minutes per week=26 min/day). The difference of 9 min/day at 6 months compared to baseline could mean that the subjects only attended the obligatory exercise session (60 minutes per week=9 min/day). The 3 months measurement was mainly done in the summer, whereas the 6 months measurement was executed during winter. Therefore, seasonal variation in leisure time physical activity could also be an explanation for the decrease in PA at the 6 months measurement compared to the 3 months measurement. Data on seasonal variation in PA have been reported by Pivarnik et al. [28]. They report that in winter compared to summer, their participants perform fewer exercise sessions per week and the sessions have a shorter duration.

The most interesting finding of this study was the association between the change in glucose tolerance and the changes in weight and PA, whereas no association with changes in SE or EDS was found.

We did not find an association between changes in glucose tolerance and changes in SE or EDS. This may be due to the fact that there was no significant improvement in SE and EDS. EDS was within normal values (score<10) during the whole study period, we therefore conclude that EDS is not a big issue in this sample. Also, SE was significantly reduced at 3 months compared to baseline. Our hypothesis was that SE would improve with weight loss but maybe the weight loss was not large enough. Kalra et al. [33] found a significant improvement in SE after surgical weight loss of 66.4 ± 8.8 kg.

This study has some limitations. First we experienced a large dropout of 45%. This is due to subjects not wanting to continue with the study, but also some subjects dropped out of the treatment programme and were therefore not eligible for inclusion in our study. In 5 subjects PA and SE was not measured correctly, probably because subjects did not clean the electrodes on the device. These electrodes can become obstructed by sebaceous matter and therefore fail to conduct signals from the skin of the arm. When cleaned properly every evening this is no problem, but some subjects forgot to do this. In 3 subjects we were not able to measure %body fat and fat mass with the bio-impedance scale, because of a %body fat >55%, the upper detection limit of the bioimpedance scale. Only 1 subject missed the 3 months measurement, but was present at the 6 month measurement, hence the missing weight, BMI and WC data.

We can conclude that this commercial lifestyle modification programme significantly reduced weight, waist circumference, %body fat and fat mass and improved glucose tolerance after 3 and 6 months of treatment. The improvement in glucose tolerance was partly explained by the changes in weight and PA, but not by SE or EDS.

The authors would like to thank Dr. H. Kleinveld from the Atrium MC in Heerlen for the supply of the glucose drinks and Theo van de Kerkhof from APC Cardiovascular for the use of the SenseWear Pro2 Armband.

Copyright: © 2013 Aller EEJG, et al. This is an open-access article distributed under the terms of the Creative Commons Attribution License, which permits unrestricted use, distribution, and reproduction in any medium, provided the original author and source are credited. 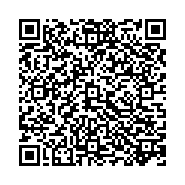