Background: Diabetes mellitus is one of the most common metabolic disorders which is characterized by multiple long-term complications affecting almost every system in the body. Foot ulcer is one of the main complications of diabetes mellitus. The prevalence of foot ulcers ranges from 4% to 10% among persons diagnosed with diabetes mellitus. The objective of this study was to assess the prevalence factors associated with foot ulcer among diabetes patients in Ayder referral hospital. Methods: This institutional based cross sectional study was conducted in Ayder referral hospital from in December 2013-January 2014. Systematic random sampling was used to select 228 participants. Structured questionnaire developed from the literatures was used to collect data. Data analysis was done manually and summarized using descriptive statistics as well as texts, figures, and tables were used to present the findings. Data was collected after getting approval for the project proposal from Mekelle university department of nursing ethical review committee. Result: Among the 228 study participants all of them have regular follow up to the diabetic clinic of Ayder Referral hospital and 75% of them had type 2 diabetic mellitus. 12% of the 228 diabetic patients have foot ulcer currently with 38% of them are with Wagner’s grade 0 Conclusion: this study concluded that 12% diabetic patients have foot ulcer. The main reasons to develop foot ulcer were poor glycemic control, wearing inappropriate Shoes and having no special foot care.

Diabetes mellitus (DM) is one of the most important and common metabolic disorders affecting 2–5% of the population in Europe and about 20% of the population in various other parts of the world [1]. Genetic factors are involved with the development of DM. as a result, first degree relatives have a higher risk of developing type 1 DM than unrelated individuals from the general population (approximately 6% vs. <1%, respectively) [2]. It is characterized by multiple long-term complications affecting almost every system in the body [1]. It often leads to blindness, heart and blood vessel disease, stroke, kidney failure, amputations, and nerve damage [3]. Diabetes is also associated with significantly accelerated rates of several debilitating microvascular complications such as nephropathy, retinopathy, and neuropathy, and macrovascular complications such as atherosclerosis and stroke [3]. Foot ulcer, which often results in lower extremity amputations, is one of the most common complications associated with the disease [4].

Foot diseases are leading cause of hospitalization among such patients [5,6]. The prevalence of foot ulcers ranges from 4% to 10% among persons diagnosed with diabetes mellitus [7]. The presentation of diabetic foot disease is variable, ranging from cellulites, abscesses, and ulcers to gangrene. Surgical management depends on the presentation, and varies from minor debridement, Incision and drainage, to amputation. Fifty percent of all non-traumatic lower limb amputations occur in persons with diabetes and six of every one thousand diabetics suffer amputation each year [8]. Once amputation has occurred, loss of the contra-lateral leg becomes a high probability [9].

In the UK, 50% of the hospital bed occupancy of diabetic patients is caused by foot problems. DFU have a profound effect on patients’ quality of life and result in a great burden on the health service resources [10]. Diabetes-related foot ulcers represent challenges for the individual and for the health care system, as they increase the demand for specialized health care. Even though preventive strategies have been shown to be cost-effective [11], meeting this demand in the health care system remains an enormous challenge from the financial and workforce perspectives [12,13].

In Sub-Saharan Africa, fast uncontrolled urbanization and changes in standard of living are responsible for the rising epidemic of DM and the observed increase presents a substantial public health and socioeconomic burden in the face of scarce resources [14]. The prevalence of undiagnosed diabetes mellitus is high in most countries of sub- Saharan Africa, and individuals who are unaware they have the disorder are at very high risk of chronic complications [15]. WHO estimates the number of cases of diabetics in Ethiopia to be about 800,000 in 2000 and projected that it would increase to about 1.8 million by the year 2030 [16]. “Wagner Classification” is one of the oldest and probably the most well-known classification of foot ulcer which was proposed by Wagner and Meggitt in the 1970s. It uses six grades in classifying diabetic foot lesions. Grade 0 no ulcer, but with risk for ulceration, Grade 1 superficial ulceration, Grade 2 ulcer with deep infection, but without involvement of the bone, Grade 3 ulcer with osteomyelitis, Grade 4 - localized gangrene and Grade 5 - gangrene of the whole foot [17]. Therefore the aim of this study was be to assess the prevalence and factors associated with foot ulcer among adult diabetic patients in Ayder referral hospital.

This institutional based cross sectional study was conducted in Ayder referral hospital found in Mekelle city which is the capital city of Tigray from in December 2013 - January 2014. Systematic random sampling was used to select 228 participants from those patients who have regular follow up in the diabetic clinic. Structured questionnaire developed from the literatures was used to collect data. It was first prepared in English and translated to local language then back translated to English for consistency. Half day training was given for data collectors about the overall data collection process. Pre test was employed on 10% similar population in other hospital who were not included in the study. Participants’ details were remaining anonymous and confidentiality was guaranteed. The information in the study tool was checked for completeness before entering into Excel. Data analysis was done manually and summarized using descriptive statistics. Text, figure, and tables were used to present the findings. The data collection was carried out after getting approval for the project proposal from Mekelle University, college of health sciences, department of nursing ethical review committee. After official permission from Ayder referral hospital, verbal consent was obtained from participants. The purpose, procedures of the study, advantages and disadvantages was explained to participants and participation was on voluntary basis and their information kept confidential.

Among the 228 study participants all of them have regular follow up to the diabetic clinic of Ayder Referral hospital and 170 (75%) of them had type 2 diabetic mellitus. Majority of the patients 184 (81%) have no special foot self-care, 52(23%) of the diabetic patients have additional disease and 30 (58%) were hypertensive (Table 2). Twenty eight (12%) of the patients have foot ulcer currently with 10 (38%) of them were with Wagner’s grade 0 (Figure 1). 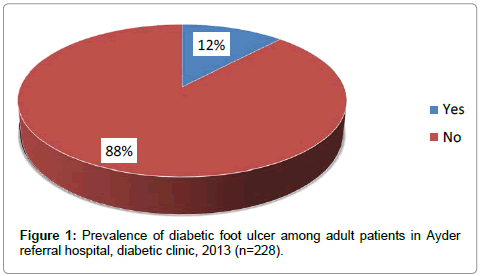 This study tried to assess prevalence of foot ulcer among diabetic patients who have regular follow up to diabetic clinic of Ayder referral hospital. Foot ulcer is occurred in 28 (12%) of the study participants, with 10 (38%) of the patients with foot ulcers are Wagner’s grade 0. This was less prevalent as compared to the study conducted in Tikur Ambesa Hospital Ethiopia which is 31.1% in which 34.6% of them were in Wagner’s grade 3or 4 [18]. On the other hand this was slightly lower than a study conducted in Arbaminch in which diabetic foot ulcer was observed among 14.8% diabetic patients [19]. Another study conducted in north India revealed the prevalence of diabetic foot ulcers was 14.30% [19]. This variation might be due to Time gap, variation in number of patients and difference in geographic location.

This study revealed that only 19% patients had practice of special foot care by their selves, this was much lower as compared to the study conducted in Arbaminch which diabetic foot self-care practice was observed among 55.1% of clients [19]. This difference might be because the prevalence of foot ulcer is lower as well as the difference in knowledge about foot self-care.

In this study 184 (81%) respondents mentioned the reasons to the development of foot ulcer due to absence of special foot care practice and 74 (32%) do not wear appropriate shoes for diabetic patient. This was different as compared with study conducted in North West England in which the main cause of ulceration were pressure from footwear (55%), whereas trauma (15%), fissure (7%), self-treatment/ injury (6%) and unknown or other causes accounted for the rest (17%) [20]. this difference might be due to difference of awareness on the prevention activities and difference in socioeconomic status.

Out of the total participants 150 (66%) had uncontrolled blood glucose level is by the current medication which exposes them to development of more diabetic complications. But a study conducted in Minelik II Hospital, Ethiopia, 1997 showed peripheral neuropathy was encountered in 35.2% of patients. Thirty two male patients were found to have impotence; three patients were seen at initial visit to the clinic with thrombotic stroke and three patients developed gangrene and ulceration of foot which resulted in below- knee amputation [21,22]. But in this study no patient found amputated or greater than Wagner’s classification 3 or 4 diabetic foot ulcer. This may be due to the early diagnosis and management of the diabetic foot complication and having better follow up of the patients with DM.

Based on the findings of this study, the following can be concluded:

• The prevalence of diabetic patients have foot ulcer 12% and 38% of them were with Wagner’s grade 0.

• The main reasons to develop foot ulcer was due to poor glycemic control, wearing of in appropriate Shoes and having no special foot care. This study also shows co-occurrence of diabetes with other chronic health problems are high.

• Among the study participants who have foot ulcer, 38% of them were on Wagner’s grade 0, meaning that they can be managed easily.

I would like to express my deepest and heartfelt thanks to my advisor and Mekelle University College of Health Science department of Nursing for giving me this chance. I want to thank also to my colleagues, the study participants and all those who helped me from the beginning to the end of the paper.

Copyright: © 2015 Gebrekirstos K, et al. This is an open-access article distributed under the terms of the Creative Commons Attribution License, which permits unrestricted use, distribution, and reproduction in any medium, provided the original author and source are credited. 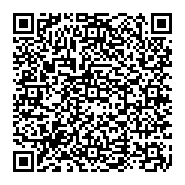