Somogyi Effect in a Patient of Type 2 Diabetes Mellitus

Insulin-induced posthypoglycemic hyperglycemia is an important cause of poorly controlled diabetes [1]. This phenomenon, which is known as the Somogyi effect, is characterized by the following: (1) insulin-induced hypoglycemia and a rebound insulin resistant hyperglycemia (prolonged hypoglycemia induced by increased of night dose of insulin can lead to rebound hyperglycemia. This is due to the release of release of endocrine hormone glucagon backed up by release of stress hormone cortisol and epinephrine); (2) negative urine tests for sugar and ketones, followed within several hours by substantial glycosuria and variable ketonuria; (3) wide daily fluctuations in blood glucose levels that are generally unrelated to dietary intake; (4) periods of mild hypothermia; and (5) nocturnal sweating and nightmares in patients with late-onset hypoglycemic effects. Although this clinical phenomenon was described initially by Somogyi and Kirstein [2], confirmed by numerous investigators [3-5], and thoroughly defined by Bloom et al. [6], the basic mechanism underlying the compensatory insulin-resistant, hyperglycemia remains unexplained.

A 42 year old lady presented with fasting hyperglycemia with a fasting plasma glucose level of 286 mg/dl and generalized weakness. She was diagnosed with Type 2 Diabetes Mellitus six months back by a primary care physician. She had a FPG (fasting plasma glucose) of 265 mg/dl during initial presentation. On further evaluation her HbA1c level was found to be 8.6% and her lipid profile was within normal limits. She was started on Mixtard Insulin (30/70) with a dose of 15 units before breakfast and 15 units before dinner. On subsequent visits to the fasting glucose levels did not decrease and the primary care physician increased the dose to 30 units before breakfast and 30 units before dinner. The patient was subsequently referred for further evaluation and management when her fasting levels showed no improvement.

Physical examination of the patient revealed a BMI of 26, Blood Pressure 132/84 mm of Hg, HR of 102/min and no evidence of any deformity. Systemic examinations including CVS and CNS were normal.

Detailed history of the patient revealed she had night sweats and nightmares for last two months and severe weakness during evening hours. Both her parents were diabetics and her only brother too is a diabetic and his sugar levels are controlled with insulin.

The patient was advised to get HbA1c done along with lipid profile and renal profile including urine for microalbumin. Reports revealed HbA1c level of 6.8 with no other abnormal biochemical parameters. She was then asked for self monitoring of blood glucose at home 5 times a day for next 4 days at 7 A.M. (fasting), 1 P.M., 8 P.M. (before dinner), 10P.M. (before going to bed) and 2 A.M. The readings for the 4 days were as follows (Table 1 and Figure 1):

(All readings are in mg/dl) 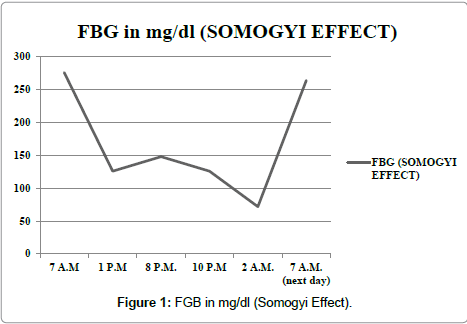 The readings clearly indicated that patient had hypoglycemia after midnight followed by rebound hyperglycemia in morning. Based on these findings the patient was diagnosed as a case of Somogyi Effect and her treatment was changed as follows:

· She was advised Insulin Glargine (Lantus) 20 units daily at 8 A.M.

After 4 days of treatment her fasting blood glucose decreased to 164 mg/dl and her 2 A.M. sample showed a glucose level of 153 mg/dl. Her night sweats and nightmares decreased and generalized weakness also got better.

The population’s prevalence of the Somogyi effect is assessed to be 12.6% according to Mozersky et al. [7]. But unfortunately in out-patients clinic settings these cases often go undetected. The main problem lies in the fact that most of primary care physicians are unaware of this phenomenon. Moreover patient rarely complains of night sweats and other symptoms of hypoglycemia as very few of them wake up in the early morning hours. If the blood sugar level drops too low in the early morning hours, hormones (such as growth hormone, cortisol, and catecholamines) are released. These help reverse the low blood sugar level but may lead to blood sugar levels that are higher than normal in the morning. So a clinician should have a high degree of suspicion while dealing with cases of persistently high fasting glucose levels in spite of increasing night dose of insulin. A continuous glucose monitoring (CGM is an FDA-approved system that tracks blood sugar levels of a patient day and night. The device collects readings automatically every 5 minutes. Along with finger sticks, this device can help detect trends and patterns and give a more complete picture of diabetes. The data can help find ways to better manage the condition) may not be possible in all cases but self monitoring of blood glucose (by a glucometer) 4-5 times in a day including one sample between 2-3 A.M. in the morning can aid in the diagnosis of such cases. Though there is a debate between various methods to manage such cases but replacing NPH insulin with long acting insulin like Glargine can help decrease the nocturnal hypoglycemia. Some clinicians advocate use of short acting insulin like Lispro at night to manage such cases. But giving Glargine in morning between 7-9 A.M. has showed better results. A small snack just before going to bed is also found to be helpful in some cases. The best option today is continuous insulin delivery by insulin pump but this is costly and cumbersome for many people in rural settings. With advancement in diabetic research, we can hope better diagnosis and management of such case in future.

Copyright: ©2015 Brijesh M. This is an open-access article distributed under the terms of the Creative Commons Attribution License, which permits unrestricted use, distribution, and reproduction in any medium, provided the original author and source are credited. 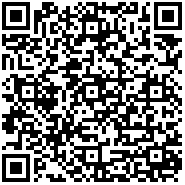