Objectives: Sustained hyperglycemia results in non-enzymatic glycation of Apo B or LDL particle which may affect its recognition and uptake. Increase in circulating LDL levels is a vital contributor for atherosclerosis. APOB gene (c.12669 G>A, p.GLN4154LYS) polymorphism is believed to be associated with coronary artery disease. We thus designed our study to evaluate association of APOB gene polymorphism with Apo B glycation in type 2 diabetic patients. Methods: A total of 45 non diabetic controls and 45 type 2 diabetic patients participated in this study. Following an overnight fast, venous blood was collected and analyzed for glycemic status, lipid profile and other biochemical parameters. Apo B was estimated using nephelometry, Glycated LDL was estimated by ELISA. PCR-RFLP was used to determine the DNA polymorphism in the APOB gene using EcoR1. Results: Polymorphic analysis of APOB gene in diabetic population showed 73.3% wild type (R+/R+), 20.0% heterozygous mutant (R+/R-) and 6.7% homozygous mutant (R-/R-). Significant associations of glycated LDL was observed with R-/R- and R+/ R- when compared with R+/R+. Significant association was not observed between Apo B levels and of genotypes. Conclusions: Presence of polymorphism may not affect the expression Apo B level but acts as an important contributor to LDL modification and increases its glycation. Since glycation of LDL reduces uptake of LDL by LDL receptors, it may increase the risk of atherosclerosis.

Chronic hyperglycemia is an important etiologic factor resulting in macro and microvascular complications in diabetes mellitus (DM). The most common and life threatening disorder in type 2 diabetics is cardiovascular disease (CVD). The risk for death by CVD among diabetic subjects is greater by three folds when compared to nondiabetic subjects [1]. The risk of CVD is markedly increased in patients with poor glycemic control [2]. Increased extracellular glucose leads to non enzymatic glycation of various proteins resulting from interaction of glucose with free amino groups of lysine residue of protein. Sustained hyperglycemia, through advanced glycated end products (AGEs) is potential contributor for glycation of low density lipoprotein (LDL) [3]. The modification by AGEs can occur at Apo B as well as phospholipids components of LDL [3]. Increased non-enzymatic glycation of Apo B containing lipoproteins is one of the post-secretory modifications which impair its uptake and metabolism by the high affinity low density lipoprotein (LDL) receptors. This increases the residence time for the modified LDL in circulation and subendothelium, which is taken up by macrophages resulting in formation of foam cells and thus may contribute to increased risk of atherosclerosis [3].

¨Apolipoprotein B (Apo B) plays a central role in human lipoprotein metabolism and is encoded by APOB gene located on chromosome 2 [4]. Apo B-100 is ligand for LDL-receptor-mediated endocytosis of LDL particles. Raised serum ApoB levels are associated with increased risk of coronary artery disease (CAD) [5,6] and several APOB polymorphisms have been evaluated for their association with lipid levels and CADin different populations [7-10]. One such polymorphism in the 29th exon (c.12669 G>A) results in Glu4154Lys amino acid substitution. This polymorphism can be detected by using EcoRI restriction enzyme. Gene polymorphism may have its consequences ranging from effect on structure function relationship of a protein or alteration in protein expression level. Role of the APOB gene polymorphism in coronary artery disease in the Indian Punjabi population has been evaluated by Sharma et al. [8]. Thus we designed this study to evaluate the effect of APOB gene polymorphism on levels of Apo B containing lipoproteins and their glycation.

The present cross sectional case control study was carried out in the Department of Biochemistry and Medicine, at University College of Medical Sciences and Guru Teg Bahadur Hospital, Delhi-110095, between Nov 2012 and Apr 2013. Ethical clearance was obtained from the institutional ethical committee for human studies (UCMS/IECHR/ BIO/261012 dated 26 Oct, 2012). All the patients were recruited from the Diabetic clinic and Medicine outpatient department (OPD) of GTB Hospital

Recruitment of patients and control

We recruited 45 diabetic patients in the age group of 40-60 years irrespective of the gender, as per to new guidelines of American Diabetes Association (ADA) 2013 [11].

For all subjects, blood samples were collected after an overnight fasting. Blood collected in plain vials were allowed to clot for 30 minutes and then it was centrifuged at 3000rpm for 10 min for serum separation. The serum thus separated was analyzed for routine biochemical parameters using Olympus AU400, Japan. Serum cholesterol [12], HDL cholesterol [13], and triglycerides [14] were analysed using commercially available kits on the autoanalyzer. Blood in fluoride vial for plasma glucose (fasting and 2 hour post prandial) was analysed using standard enzymatic method (GOD-POD method) [15]. LDL cholesterol was calculated using Freidwald formula [16]. Serum Apo B was estimated by nephelometry, using NEPHSTAR apolipoprotein B kit. Whole blood with EDTA was used for HbA1c estimation by HPLC method (BIO RAD, D-10). EDTA blood was subjected to centrifugation at 3000 rpm for 10 minutes to separate the plasma. The plasma thus separated was stored in aliquots at -80ºC for estimation of glycated Apo B using commercially available kit (Glycacor TM by Exocell Philadelphia, USA) based on competitive ELISA. The glycated LDL was measured in apolipoprotein B equivalents, and was expressed as mg/dl. Percent glycated Apo B was calculated as Glycated Apo B/ Apo B

For genomic study 300 μl whole blood in EDTA was kept separately at 4-8ºC. This blood was subjected to DNA isolation within 2 weeks of collection.

Genomic DNA was extracted from whole blood by commercially available kit (SIGMA DNA isolation kit™) as per the instructions provided by the manufacturer. PCR reactions were carried out in 20 μl reaction mixture using the forward and reverse primers for the 376 bp sequence with restriction site for EcoR1 in Apo B gene. 20 μl reaction mixture was prepared containing 2.5 μl genomic DNA, 200 μM dNTPs, 1.5 mM MgCl2, Taq reaction buffers and 2 U Taq DNA Polymerase. The primer sequences were: forward primer (F) 5’--GCTCACCCTGAGAGAAGTGTCTFCA-3’ and reverse primers (R) 5’--CATAGTGCAAAGTTCCTCCCTAGTG-3’. After initial melting temperature of 94°C (5 min), 30 cycles of denaturation, annealing, and extension (2 min at 94°C, 1 min 59°C and extension for 1min at 72°C) were carried out on a programmed thermocycler ( Eppendorf Mastercycler Gradient-5331). A final 10 min extension step at 72°C terminated the process.

The PCR-products were then digested in 45 μl reaction mixture using 4U of EcoR1, BSA, (Genei Merck) and 12.5 μl of PCR mix. Afteractivation step at 37ºC for 45 minutes was followed by inactivation stepat 65ºC for 10 minutes. The products were run on 2.5% agarose gel in 1X Tris-acetate ethylenediamintetraacetic (TAE) buffer and ethidium bromide dye at a constant voltage of 50 V and the gel was visualised on the gel documentation system (UVITEC). Three types of bands were visualized. The cutting site for EcoRI was based on a single base-pair mutation atgene (c.12669 G>A). An uncut fragment with a size of 376 bp was defined as the R - allele; when digested, the two resulting sub fragments of 260 and 116 bp were defined as the R+ allele (Figure 1). 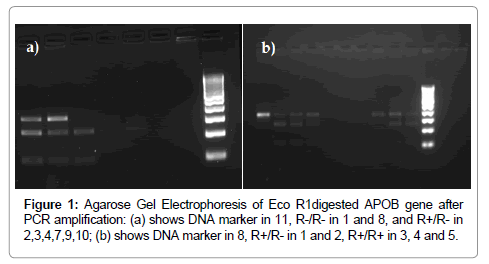 Data was analysed using SPSS software version 20.0. The data in the two groups were analysed using students‘t’ test. The allele frequency was calculated using gene counting method. Comparison of the categorical data i.e., different APOB genotypes among controls and obese subjects was done by Fischer’s exact test and χ2 test. Odd’s ratios were calculated with a 95% confidence interval limit using 2×2 contingency table. Two way ANOVA was applied for all parameters taking group as 1st factor and polymorphism as 2nd factor. If interactionbetween groups and polymorphism was <0.15, we applied one way ANOVA to compare within group and Tukey’s test for multiple comparisons. To compare between groups, t test was applied and p-value was adjusted as Bonn Ferroni correction i.e. 0.05/3≈0.02.

Values are expressed as mean ± SD, p<0.05 is significant

Table 2: Comparison of Apo B and glycated LDL among study groups.

Patients with diabetes frequently suffer from dyslipidemia which is characterized in part by defective lipoprotein uptake and metabolism [19-21]. Since earlier studies have indicated that APOB polymorphism is associated with CAD, we designed our study to analyse the effect of APOB polymorphism on lipid profile and extent of glycation of LDL. R+ allele was found to be more common in our population. Similar results were reported from Punjab and Tamil Nadu also [8,22] (Table 4). There was no statistically significant difference in the LDL-C or any other lipid parameters among different genotypes of APOB in our study population. This is in line with other studies on different ethnic populations in India [8,22]. Both studies observed no association between total or LDL cholesterol levels with different APOB genotypes in CAD patients as well as normal subjects [8,22]. In addition, Delghandi et al studied DNA polymorphisms of the APOB gene (XbaI, EcoRI, and MspI RFLPs) in Norwegians population and concluded that variations in the EcoR1 APOB gene polymorphism, does not affect the circulating blood lipids [7]. Contrary to all these studies, Timirci et al. observed that polymorphism of this gene affects total cholesterol and LDL cholesterol levels in obese children in Turkish population [23]. These results indicate that G> A polymorphism has no effect on circulating lipids in most populations. However, association of genotypic variation with circulating lipids may vary in different ethnic populations.

The results of our study also reveal that glycation of LDL and ApoB is higher in diabetes and similar results have been reported earlier also [24-26]. On comparing the association of glycated LDL and percent glycation of Apo B with different genotypes, significantly higher glycation of LDL and ApoB was observed in individuals with R- allele, being highest in individuals with homozygous R- genotypes. This finding indicates that presence of SNP (G>A) i.e. substitution of Glu →Lys at codon 4154 in exon 29 of Apo B increases susceptibility of Apo B to undergo glycation and thus acts as an important contributor to LDL modification. Increased non-enzymatic glycation of Apo B containing lipoproteins impairs uptake and metabolism by the high affinity low density lipoprotein (LDL) receptor, and is one of the post-secretory modifications contributing to accelerated atherosclerosis in diabetes [27]. Glycated LDL is more susceptible to oxidative modification than non-glycated LDL. Therefore, glycated-LDL accumulates in plasma and may enhance cholesterol ester accumulation in macrophages and thus may increase the risk of atherogenic complications [3,27]. In addition the modified LDL also stimulates vascular smooth muscle cells to produce pro oxidant and pro inflammatory state and thus contributes to atherosclerosis in diabetes [27].

Since LDL and Apo B levels are similar in all genotypes, we suggest that presence of polymorphism may not affect the expression of Apo B level but increases its susceptibility to glycation and thus may increase the risk of cardiovascular complications. The limitation of this study is relatively small sample size. So potential for selection bias may raise some concerns on the statistical precisions of the estimates.

The present study indicates that, R+/R+ is the most common genotype and R-/R- is the least common. Though presence of SNP (G>A) may not alter phenotypes of apoB and LDL, it acts as an important contributor to LDL modification and hence may predispose the individuals to complications like atherosclerosis.

Authors declare that there is no financial or non-financial conflict of interest and competing interests.

KD, SG, SBS, and SVM designed the study, KD and SG carried out experiments and acquired data; AA, and SVM helped in recruiting patients and performed CIMT and HbA1c analysis; SG, SBS, KD, AA and SVM contributed to draft the whole project. All authors have read and approved the final manuscript.

The authors acknowledge the general technical support provided by our colleagues Dr Mohit and Dr Rajarshi.

Copyright: © 2015 Dev K, et al. This is an open-access article distributed under the terms of the Creative Commons Attribution License, which permits unrestricted use, distribution, and reproduction in any medium, provided the original author and source are credited. 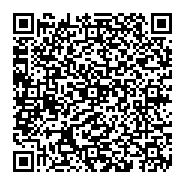