Progression of diabetic nephropathy to end stage renal disease can occur in the presence of minimal evidence for type 2 diabetes mellitus, and the recent literature indicates the pathology of diabetic nephropathy arises even in the absence of diabetes, suggesting other contributors like over expression of glucose transporter 1 (GLUT1) may have a similar pathogenesis. Although hepatitis C has been implicated in accelerating declines of renal function in diabetic nephropathy in some cases, evidence of hepatitis C activity cannot be assumed to contribute to the worsening renal function in this case. Here we report a case in a 61 year- old female with minimal elevation of Hemoglobin A1C (HbA1C), seropositivity for hepatitis C and anapparent rapid decline of renal function. The patient presented with a previous elevation of serum creatinine concentration from 1.4 to 4.7 mg/dl over the last 23 months. The patient had been treated with insulin and a recent HbA1C was 6.2%, correlating with an average blood glucose concentration of 130-150 mg/dl. There was no history of diabetic retinopathy or neuropathy. The patient was also taking anangiotensin converting enzyme inhibitor (ACEI) and had controlled hypertension over the 2 years prior to the current hospitalization for hematochezia. The serum creatinine then increased to nearly 6 mg/ dl after admission. Acute kidney injury work-up (super imposed on chronic kidney disease and proteinuria) beyond hematochezia, revealed hepatitis C seropositivity without liver failure. The renal biopsy was typical for established diabetic glomerulosclerosis, without evidence of another disease process. A plot of the reciprocal serum creatinine concentration versus time waned linearly as expected for progression of a single, chronic disease process, despite the appearance of promptly falling renal function on the plot of serum creatinine concentration versus time. We suggest that 1) The appearance of rapid decline ofrenal function was actually the natural progression of chronic diabetic nephropathy; 2) Other contributors rather than mild level of hyperglycemia might associated with development of substantial diabetic nephropathy despite clinical absence of other diabetic tissue complications; 3) A role for hepatitis C -persuaded acceleration of renal disease was not supported in this case.

It has been demonstrated in several observational studies that hyperglycemia is an important risk factor for development of microvascular complications in patients with type 2 diabetes mellitus [1]. In a recent report, there was reduction in the risk of micro vascular complications including progression of nephropathy with intense glycemic control and sustaining the HbA1C level below 7% [2]. In another meta-analysis of 7 clinical trials, intensive glycemic control plus use of an angiotensin converting enzyme inhibitor was associated with statistically significant reduction in the risk for microalbuminuria and macroalbuminuria [3]. On the other hand, cases of nodular glomerulosclerosis and advanced diabetic nephropathy in the presence of well controlled diabetes mellitus, and cases of long term, poorly controlled diabetes lacking development of diabetic nephropathy, suggest there are factors other than the level of hyperglycemia which are important in influencing development of the renal disease [4]. Progression of diabetic nephropathy (DN) to end stage renal disease (ESRD) can arise in the presence of minimal evidence for type 2 diabetes mellitus, and the recent literature indicates the pathology of diabetic nephropathy occurs even in the absence of diabetes, suggesting other contributors and potential mechanism for the pathology , such as increased glomerular mesangial GLUT1 [5]. In addition, Hepatitis C virus infection has been proposed in the literature as a possible accelerator for progression of diabetic nephropathy [6]. Here we report a case of well controlled type 2 diabetes mellitus per definition by the level of HbA1C, with apparent rapid decline of renal function and concomitant Hepatitis C.

A 61 year-old African American female visited the Emergency Department with complaint of rectal bleeding. She was admitted to the hospital for gastrointestinal work-up as she has had acute anemia which was not requiring blood transfusion with hematocrit of 28.2% and Hemoglobin of 9.2 g/dl related to moderate colitis confirmed by colonoscopy with no proof of coagulopathies. Her Past Medical History were significant for hypertension for 12 years on Amlodipine and Ramipril, type 2 diabetes mellitus for 7 years with last HbA1c of 6.2% within the last month prior to hospital admission and no prior evidence of retinopathy or neuropathy. The patient had a history of cervical cancer stage IA2, status post hysterectomy and pelvic radiation therapy four years prior to current presentation with rectal bleeding. The patient also had a history of chronic kidney disease with baseline creatinine of 1.4–2.7 mg/dl during the year previous to the current presentation. There was no record of a previous renal disease work-up.

In her physical exam her vitals displayed Blood pressure of 146/77 mm Hg, pulse rate 66/minute, temperature of 36.6 degree of Centigrade, Respiration rate of 18/minute with oxygen saturation of 98% in room air. Her height was 1.615 meter and weight of 98 Kilogram (Kg) with BMI of 38 kg/square meter (m2). In general alert, oriented and cooperative lady in no acute distress, clear lungs bilaterally, regular rate and rhythm of heart, obese abdomen with no organomegaly and soft in touch, no lower extremities edema and palpable peripheral pulses.

During the current admission, the patient’s kidney function declined rapidly with an increase of the serum creatinine to nearly 6 mg/dl over days during the admission when Nephrology was consulted for apparent acute kidney injury (AKI) on chronic kidney disease (CKD). Renal ultrasound examination with Doppler flow analysis was performed, revealing normal sized kidneys’: Right 12.7 centimeter (cm), Left 11.3 cm in length and normal parenchymal echogenicity. There was no hydronephrosis and a normal peak systolic velocity and normal renal artery velocity/aortic velocity ratiobilaterally. Urinalysis with microscopy revealed Specific gravity of 1.010, PH 6.5, Rbc 1/ high power field (hpf); Wbc3/hpf; 3+ Protein, 1+ Glucose and no casts. The Urine Prot/Creat ratio was 11.7 g/g and urine spot sodium was 71 mmol/l and Fraction Excretion of sodium (FENA) of 3.74% in the absence of any diuretics. Her lipid panel was checked and was unremarkable. Serum protein electrophoresis revealed no evidence of monoclonal paraprotein and Urine immunofixation revealed albuminuria without a monoclonal paraprotein. Antinuclear antibody and Rheumatoid factor were negative; C3, C4 and freekappa/lambda were within the normal range. There was no peripheral eosinophilia and the urine eosinophil smear was negative. A Human immunodeficiency virus (HIV) screening test and Rapid plasma regain (RPR) were both negative. A hepatitis screening panel revealed positive hepatitis C Antibody and HCV RNA genotype 1a with viral copies of 1,190,000 IU/ ml by real time reverse transcription polymerase chain reaction and no evidence of cirrhosis. Cryo globulins were not detectable in the serum. The diagnosis of hepatitis C was just recognized in this admission. Since there was no clear etiology in the history or work-up for the apparent rapid decline in kidney function during the previous 2 years and the current admission, the patient was offered a renal biopsy. Microscopic examination revealed extensive diabetic glomerulo sclerosis with expansion of mesengial matrix, nodule formation and hyalinizationof arterioles (Figure 1). Findings consistent with diabetic nephropathy were also confirmed by Transmission Electron Microscopy including marked mesangial sclerosis, thickening of the basement membranes and reactive epithelial changes, in the absence ofany electron dense deposits (Figure 2). There was no evidence for other renal diseaseand no evidence to support hepatitis C contribution in the disease process.

Figure 1A,B,C: H & E (A) and PAS (B,C) staining revealed expansion of the mesengial matrix with nodule formation, minimal mesengial cellularity, and no neutrophils or necrosis. There is marked tubular atrophy, fibrosis and hyaline sclerosis.

Despite the apparent rapid rise of serum creatinine in the patient, a plot of reciprocal creatinine versus time over the previous 2 years demonstrated a linear relationship consistent with the concept of continued development of the original chronicrenal disease (Figure 3). The patient subsequently developed a need to initiate hemodialysis related to signs and symptoms of volume overload such as lower extremities pitting edema, pulmonary edema and oliguria. 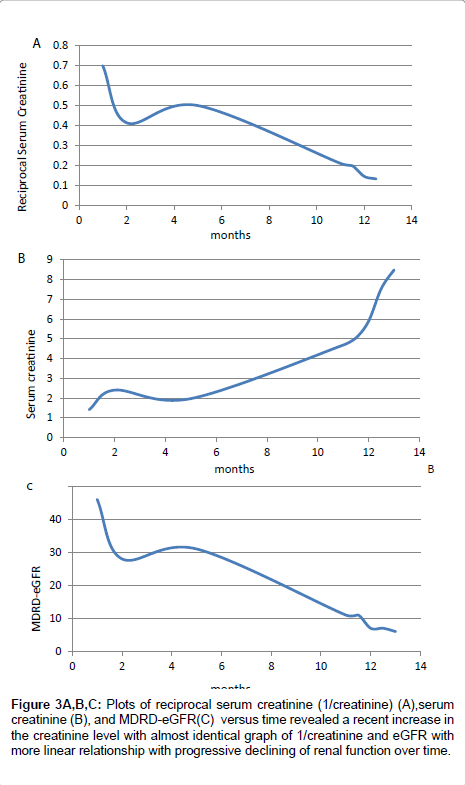 Figure 3A,B,C: Plots of reciprocal serum creatinine (1/creatinine) (A),serum creatinine (B), and MDRD-eGFR(C) versus time revealed a recent increase in the creatinine level with almost identical graph of 1/creatinine and eGFR with more linear relationship with progressive declining of renal function over time.

Patients similar to the current case with minimal elevation of the HbA1C level, well controlled type 2 diabetes mellitus, ACEI therapy, blood pressure control, lack of retinopathy andclinical neuropathy, represent an enigma which has been the subject of investigation fordecades? In addition, hepatitis C has been suggested to accelerate progression of diabetic nephropathy. Recognition of diabetic patients who appear to have a sudden fall-off in renal function after years of apparent stable renal in sufficiency also contribute to the uncertainty regarding factors which influence progression in this disease.

The HbA1C level is a reliable indicator of blood glucose control over the preceding several months. Patients with diabetes mellitus are instructed to attempt toachieve an HbA1C level below 7% with anticipation that the tissue complications of diabetes can be slowed or halted. However, in the current case, even the minimal elevation in HbA1C was associated with development of diabetic nephropathy, proteinuria and renal failure. The history of well controlled type 2 diabetes mellitus plus the new evidence of the presence of hepatitis C with rising of the serum creatinine were factors involved in the decision to perform arenal biopsy.

Progression of other condition like over-expression of GLUT1 has shown to produce nephropathy resembling diabetic glumerolosclerosis in the absence of diabetes in mouse glomeruli. Previous reports have recognized that the patients with well controlled diabetes arestill at risk of diabetic nephropathy while some patients with poorly controlled diabetes donot develop renal disease [7]. A great deal of effort has been expended over recent decades to identify factors which increase the risk for development of diabetic nephropathy and some genetic associations have been proposed [8-11]. The observed increase in serum creatinine led to concern for an acute renal injury on top of the chronic renal disease. This is commonly a cause for searches into potential contributing disease processes. However, when the patient’s reciprocal serum creatinine concentration and the Modification of Diet in Renal Disease (MDRD)- estimated Glomerular Filtration Rate (eGFR)were plotted versus time, it revealed more linear relationship such as thatdescribed for the progression of a single chronic renal disease [12]. This analysis suggested the recent apparent rapid loss of renal function might be largely explained by progression of the original chronic kidney disease. This is not a widely method to use for analyzing the renal function.

Hepatitis C has been proposed in the literature as a possible accelerator of diabetic renal disease progression. However, the linear plot of reciprocal serum creatinine concentration versus time did not suggest a secondary process such as hepatitis C or another disorder were active in this patient. In addition there was no finding to indicate the presence of hepatitis C renal disease in the clinical setting or in pathologic evaluation [13].

Despite well controlled type 2 diabetes mellitus, an apparent recent rapid loss of renal function and presence of hepatitis C in this patient, renal biopsy identified only diabetic nephropathy as the cause for the clinical picture. Although hepatitis C has been suggested to accelerate progression of diabetic nephropathy, no renal involvement of hepatitis C was detected. Furthermore, analysis of reciprocal creatinine and MDRD-eGFR versus time proposed that the apparent rapid loss of renal function likely represented the expected progression of the original chronic kidney disease, i.e. diabetic nephropathy or other pathogenesis with similar pathology like overexpression of GLUT1 which produces renal disease resembling diabetic glomerulosclerosis in mouse glomeruli.

We express thanks Dr. Leighton James from the Division of Nephrology for reviewing the report.

Copyright: © 2014 Bahri NS, et al. This is an open-access article distributed under the terms of the Creative Commons Attribution License, which permits unrestricted use, distribution, and reproduction in any medium, provided the original author and source are credited.