It may not be coincidental that the prevalence of vitamin D deficiency, estimated to affect over 1 billion people worldwide [1], is increasing in conjunction with T2D, obesity, and cardiovascular disease. The ubiquitous distribution of vitamin D receptors in the body, controlled by nearly 3,000 genes [2], suggest that a deficiency could have widespread health implications. Recent studies have examined the physiological functions of vitamin D beyond its well established role in musculoskeletal health [3]. In addition to findings of oncologic [4] and immunologic [5] associations, vitamin D deficiency is associated with cardio-metabolic risk factors including T2D [6], blood pressure [7], and obesity [8].

Lo et al. [9] report that Asian Indians require twice as much UV-B exposure to produce 25(OH)D levels equal to Caucasians due to increased skin pigmentation. In addition, a cultural tendency to avoid direct sunlight may contribute to suboptimal vitamin D status although the climate in India is sunny throughout the year. Currently, 62.4 million people in India have T2D and 77.2 million have prediabetes [10], representing the country with the second highest prevalence in the world after China [11]. Asian Indians have lower body mass index (BMI) than US whites, African Americans, and Mexican Americans [12] but are termed “metabolically obese” due to disproportionally high abdominal fat, an important contributing factor in T2D. Central obesity, sedentary lifestyle, a westernized diet, and genetic predisposition are several factors contributing to the alarming increase of T2D in India and around the world. The high morbidity and mortality associated with T2D presents an overwhelming health care burden necessitating improved treatment and preventative therapy.

Vitamin D status is known to be poor among Asian Indians [13]; however, limited data exists to assess the implication of vitamin D deficiency on cardio-metabolic traits in Asian Indians. To our knowledge, this is the first large study reporting the role of 25(OH)D deficiency in North Indians who have an increased prevalence of T2D and cardiovascular diseases [14-16].

Participants in this diabetes-focused case-control cohort are part of the Asian Indian Diabetic Heart Study (AIDHS) /Sikh Diabetes Study (SDS) [17] (Table 1). The diagnosis of T2D was confirmed by scrutinizing medical records for symptoms, use of medications, and defining diabetes according to fasting glucose levels as defined in the American Diabetes Association guidelines [18]. BMI was calculated as (weight (kg)/height (meter2)). Waist and hip circumferences were measured with a tape measure at the abdomen and at the hip. The World Health Organizations (WHO) has recommended lower BMI thresholds for Asians [19] therefore, obesity was defined using WHO’s new guidelines [19]. Participants with BMI<23 kg/m2 were classified as normal weight, BMI between 23-27.5 kg/m2 were classified as overweight, and BMI>27.5kg/m2 were classified as obese. Individuals with type 1 diabetes (T1D), or with rare forms of T2D such as maturityonset diabetes of young (MODYs), or secondary diabetes (e.g., due to hemochromatosis or pancreatitis) were excluded. Details of physical activity, smoking, alcohol, diet, and family history are described elsewhere [17,20]. Blood pressure was measured twice after a five minute seated rest period with the participant’s feet flat on the floor. Pulse pressure was calculated as: [systolic blood pressure (SBP)-diastolic blood pressure (DBP)] and mean arterial pressure was calculated as (2×DBP + SBP)/3. All blood samples were obtained at the baseline visit. Among diabetics, 40% were taking oral hypoglycemic agents. Of these, 9% were treated with sulphonylurea, metformin, dianil, ayurvedic, or ‘desi’ medicine, 5% were treated with insulin, and 26% were co-treated with insulin and oral agents. The remaining 60% were maintaining glycemic control with diet and exercise. All participants provided informed consent following procedures approved by Institutional Review Boards (IRBs). All SDS protocols and consent documents were reviewed and approved by the University of Oklahoma Health Sciences Center (OUHSC)’s IRB as well as the Human Subject Protection (Ethics) committees at the participating hospitals and institutes in India.

Table 1: Prevalence of vitamin D deficiency and the association of cardio-metabolic traits with 25(OH)D.

Statistics were performed using SPSS for windows statistical package (SPSS INC., Chicago, USA). Serum 25(OH)D levels were analyzed as a categorical variable deficient [<50 nmol/L] and sufficient [≥50 nmol/L] or a continuous variable after log transformation. As a categorical variable, difference in frequency distribution between vitamin D deficient participants and vitamin D sufficient participants were analyzed using χ2-test. As a continuous variable, multivariate logistic regressions tested association of log transformed serum 25(OH)D levels with T2D adjusting for age, BMI and gender. Multivariate linear regressions were performed to test association between log transformed serum 25(OH)D as the independent variable with quantitative traits and biomarkers related to T2D (adjusted for T2D, age, BMI and gender), obesity (adjusted for T2D, age, gender) and cardiovascular risk (adjusted for T2D, age, BMI, gender) as the dependent variable. Variables with skewed distributions were log transformed (fasting glucose, fasting insulin, C-peptide, and amylin). Untransformed measures were reported as arithmetic means while arithmetic means of the transformed variables were retransformed into the original measurement scale and reported as geometric means. Independent t-tests were used to analyze the association between serum 25(OH)D (continuous variable) with BMI tertiles in participants with and without T2D and to evaluate the effect of vitamin D deficiency (categorical variable) on mean levels of quantitative traits (continuous variable). 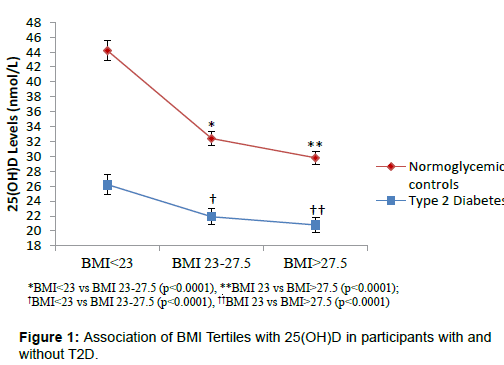 Figure 1: Association of BMI Tertiles with 25(OH)D in participants with and without T2D. 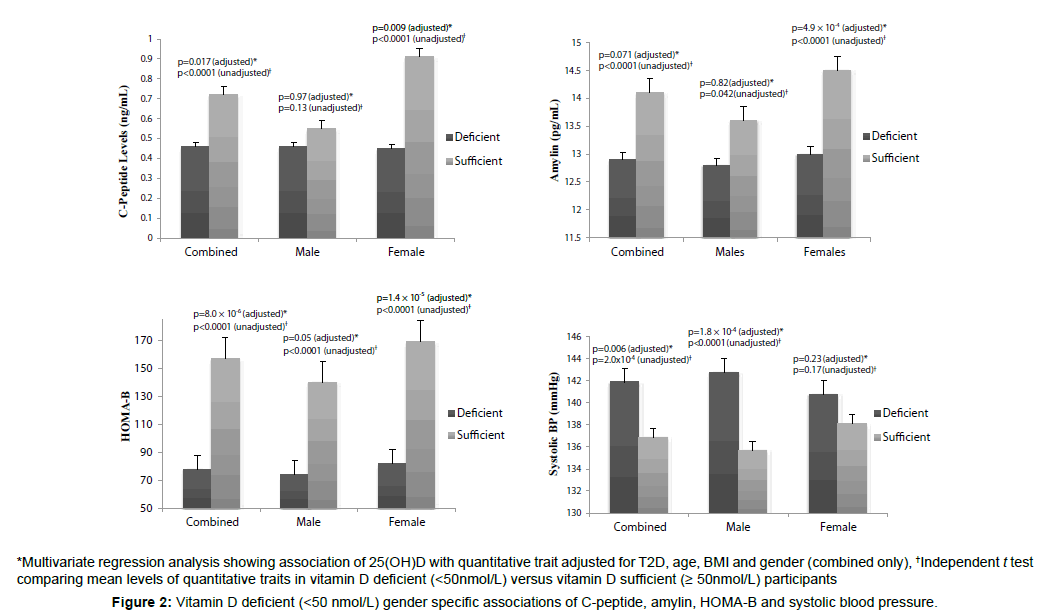 To assess the impact of medication on vitamin D status among diabetic patients, we stratified the data based on medication use (Supplemental Table 2). Of the 887 diabetic cases, 359 (40%) were taking medication to control glucose levels at the time of inclusion into this study. We observe significantly higher 25(OH)D levels with improved metabolic and cardiovascular traits among non-medicated, diabetic patients. While this may seem unexpected, significantly earlier ageof- onset of T2D (p<0.0001) and longer duration of T2D (p<0.0001) in medicated individuals was associated with lower 25(OH)D levels when compared to the non-medicated group. Furthermore, significantly higher fasting glucose in treated participants suggests uncontrolled T2D. To further assess the impact of medication and disease status on 25(OH)D levels, we stratified the data to compare non-medicated healthy participants (normoglycemic and non-hypertensive, n=434) with diseased participants (n=1331). Mean levels of fasting glucose and BMI were significantly lower whereas C-peptide and amylin were significantly higher in individuals classified as having sufficient serum 25(OH)D levels regardless of disease status (Figure 3). In this investigation, we report a very high prevalence of vitamin D deficiency in this Punjabi diabetic cohort from Northern India. The inverse association of serum 25(OH)D with T2D and related metabolic traits complements previous reports [6] and the proposed actions of vitamin D deficiency-mediated decrease in insulin secretion and sensitivity [22]. Consistent with reports from other epidemiological studies, we also observed a significant association of low serum 25(OH) D with obesity [23,24] and increased systolic blood pressure [25]. Due to our case-control study design, we cannot determine evidence for a causal relationship between vitamin D deficiency and declining cardio-metabolic traits related to T2D; however, low serum 25(OH)D in healthy, non-medicated controls was significantly associated with increased fasting glucose and BMI as well as decreased C-peptide and amylin (Figure 3). These results suggest vitamin D deficiency may increase susceptibility to T2D and therefore provide rationale for investigating preventive measures, such as improving vitamin D intake, as part of an overall strategy to improve glycemic outcomes in the Punjabi community.

Our findings of a significant negative association of fasting glucose as well as a significant positive association of HOMA-B with serum 25(OH)D add to the mounting evidence that proposes vitamin D plays a critical role in insulin secretion [26,27]. The biologically active form of vitamin D [1,25-(OH)2D] may directly stimulate insulin release by binding to the vitamin D receptors of β-cells, thus influencing pathways such as calcium-mediated insulin secretion or by affecting other genes associated with β-cell metabolism and development. While we did not observe a significant association of insulin resistance, assessed by HOMA-IR, with serum 25(OH)D, studies suggest that vitamin D may directly enhance insulin response of peripheral tissues by stimulating expression of insulin receptors. In addition to these direct actions, vitamin D may indirectly regulate calcium homeostasis in β-cells and insulin-responsive tissues [22]. Since calcium is critical for skeletal muscle function [28], increased vitamin D status may improve muscle function [29] thus increasing insulin sensitivity.

One of the strengths of our study is the assessment of serum biomarkers related to β-cell function, such as C-peptide and amylin with 25(OH)D. C-peptide, secreted in equimolar concentration to insulin, is widely considered a better marker of residual β-cell function than insulin due to its longer half-life [30]. In addition to C-peptide, amylin, a glucoregulatory hormone, is co-secreted with insulin in response to food intake to complement insulin-dependent maintenance of postprandial glucose homeostasis [31]. Interestingly, the negative association of insulin, C-peptide, and amylin with 25(OH)D was only seen in females. The higher prevalence of females with T2D in South Asian populations, in part accounted for by previous pregnancies with gestational diabetes [32], may influence the observed association in females but not in males. Another plausible explanation for the genderspecific associations found in this population is the restricted use of alcohol. Due to cultural and religious reasons, a vast majority of Punjabi females do not consume alcohol. Alcohol has been shown to increase systolic blood pressure [33,34] which could account for increased systolic blood pressure and pulse pressure observed in males. However, adjusting for the confounding effect of alcohol with systolic blood pressure did not diminish the significant association observed with 25(OH)D in males, indicating that alcohol could be a compounding factor in addition to other factors.

Our study supports the decreased bioavailability of serum vitamin D observed in obese individuals from previous studies [23,24]. Wortsman et al. [24] found obesity did not affect the skin’s ability to produce vitamin D, but may have altered the release of vitamin D into the circulation from adipose stores due to increased subcutaneous fat. As a fat soluble molecule, decreased 25(OH)D levels among obese individuals may be due to enhanced uptake in adipose tissue and metabolic clearance [23]. We did not measure parathyroid hormone, a limitation in our study since hyperparathyroidism, secondary to hypovitaminosis D is augmented by obesity [35] and could be responsible for gender-specific associations. Additionally, vitamin D deficiency is proposed to increase cardiovascular disease through secondary increase in parathyroid hormone which activates the renin-angiotensin system and stimulates systemic and vascular inflammation [36]. Further limitations of our study include the case-control study design and lack of nutritional status of participants as vitamin D levels are influenced by dietary factors. We also did not adjust for seasonal changes which may or may not influence this population since India is below 35°N latitude making it possible to synthesize vitamin D in the skin throughout the year [37]. However, strength of our study includes a relatively large and well characterized cohort from a relatively homogenous population available with demographic, clinical, and metabolic traits.

Based on the data, it is reasonable to conclude that vitamin D deficiency may increase development of risk factors that could lead to T2D and cardiovascular disease. Furthermore, overwhelming evidence exists to suggest decreased 25(OH)D levels seem to increase the severity of T2D. This could be the reason that individuals with low vitamin D in our cohort showed poor response to diabetic treatment (Supplemental Table 2). Since the Punjabi are known to be susceptible to the metabolic syndrome, T2D, and early cardiovascular disease, vitamin D deficiency may put them at additional risk, making a strong case for early intervention. Well-designed observational studies are needed to assess the use of vitamin D supplementation as a preventative agent.

This work was partly supported by NIH grants-R01DK082766 funded by the National Institute of Diabetes and Digestive and Kidney Diseases and NOTHG- 11-009 funded by National Human Genome Research Institute (NHGRI), USA. We thank the participants and research staff, and the Phen X Rising Consortium (NHGRI) who made the study possible.

Copyright: © 2012 Braun TR, et al. This is an open-access article distributed under the terms of the Creative Commons Attribution License, which permits unrestricted use, distribution, and reproduction in any medium, provided the original author and source are credited. 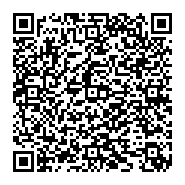