As mentioned above, neuronal excitation is a key factor to affect the arterial baroreceptor function. Patch-clamp technique has been thought to be a feasible and powerful tool to investigate the electrophysiological properties of cell membranes in a number of the excitable cells including neuron cells. All major voltage-gated ion channels (including sodium channels, calcium channels, and potassium channels) are detected in the nodose neurons by the whole-cell patch clamp recording [37-41]. Although we understand that these voltagegated ion channels are the key factors to affect the cell excitation of the baroreceptor neurons, there is no available information about the alterations of these channels in the arterial baroreceptor neurons from type 1 diabetes. Growing evidence from animal experiments has indicated that hyperpolarization-activated cyclic nucleotide-gated (HCN) channels might be a potential candidate to influence the cell excitation of the arterial baroreceptor neurons in normal and type 1 diabetic condition [36,42-44].

The HCN channels were first reported in 1976 and it was thought to be involved in the cell automaticity in the sinoatrial node of the heart [45,46]. The HCN channels have been divided into HCN1, HCN2, HCN3, and HCN4 isoforms by genomic classification [47-51]. Each channel isoform is also distinguished by distinct activation rates(HCN1>HCN2>HCN3>HCN4) [52-56]. Additionally, some endogenous substances also modulate the HCN channel kinetics. For example, activation of the HCN channels is facilitated by cAMP and cGMP [52,56-59].

Angiotensin (Ang) II has been recognized as a physiologically active peptide in multi tissues including nodose ganglia [66,67]. This endogenous hormone has some physiological effects such as the maintenance of blood pressure and fluid homeostasis [68]. Normally these physiological actions of Ang II are mediated by Ang II receptors located on the cells of local tissues [69]. It is known that circulating and local tissue Ang II concentrations are elevated in diabetic patients and animal models with diabetes [70-72]. Using some techniques including autoradiography, nodose ganglionectomy, and vagal ligation, Allen, et al. found that Ang II receptor binding sites existed in somata of the nodose neurons and transported to terminals of the nodose neurons [66,73]. Electrophysiological study revealed that exogenous Ang II has the direct neuronal effect on the nodose neurons through Ang II type 1 (AT1) receptors [74]. The data from radioimmunoassay, singlecell RT-PCR, and western blot demonstrated that endogenous Ang II level and expression of AT1 receptor mRNA and protein are increased in the nodose neurons from STZ-induced type 1 diabetic rats [43]. Additionally, exogenous Ang II mimics diabetes to enhance the HCN currents and to lower the neuronal excitability in the isolated aortic baroreceptor neurons from sham rats [44]. More importantly, diabetesor exogenous Ang II-induced alterations of the HCN currents and neuronal excitability in the isolated aortic baroreceptor neurons are fully normalized by AT1 receptor antagonists (losartan and L158,809) [43,44]. These results demonstrate that the elevation of endogenous Ang II can attenuate excitation of the aortic baroreceptor neurons through activating HCN channels in type 1 diabetes.

Above electrophysiological results were obtained in the fresh dissociated single neurons. Now question is how endogenous Ang II existed in the cytosol modulates the HCN channel kinetics in a dissociated single neuron. In general, Ang II binds with AT1 receptors located in the cell membrane, and then induces cellular responses through activating intracellular signaling cascades. However, intracellular Ang II level was elevated in renal cortical endosomes during exogenous Ang II-induced hypertension [75]. In cardiac myocytes isolated from hamsters, intracellular administration of Ang II influences the electrophysiological properties of the voltagegated calcium channels and the cell junctional conductance [76,77]. Additionally, the effect of intracellular Ang II on ion channels and cell junctional conductance is abolished by intracellular treatment of losartan (a selective AT1 receptor antagonist) but not extracellular losartan [76,77]. We also observed that intracellular administration of losartan (added to the recording pipette solution) decreased the HCN current density and increased the cell excitability in the aortic baroreceptor neurons from diabetic rats [43]. Therefore, it is possible that diabetes activates an intracellular angiotensin II production system in the nodose ganglia. Of course, we couldn’t neglect the effect of circulating Ang II on the neurons when we analyze and explain the effect of Ang II in the whole animal experiments or clinical phenomena.

What mechanism(s) account for Ang II-induced activation of HCN channels? Ang II binds with AT1 receptors to cause the superoxide production mainly through activation of NADPH oxidase [78]. NADPH oxidase is a multicomponent enzyme that produces the superoxide by the one-electron reduction of oxygen. This enzyme has two cell membrane-associated subunits (gp91phox and p22phox), three cytosolic subunits (p40phox, p47phox, and p67phox), and the small G-proteins (Rac and Rap1a) [79,80]. As a main source of the intracellular superoxide, NADPH oxidase has been found in many tissues [81-86]. Protein of the NADPH oxidase subunits is also expressed in the nodose ganglia [43]. Diabetes increases the protein expression of all NADPH oxidase subunits in the nodose ganglia [43]. NADPH oxidase inhibitors (apocynin and phenylarsine oxide) or superoxide scavengers (tempol and polyethylene glycol-superoxide dismutase) significantly inhibit diabetes- or exogenous Ang II-triggered overproduction of the superoxide, hyperactivation of the HCN channels, and suppression of the cell excitation in the aortic baroreceptor neurons [43,44]. The data from these studies clearly suggest that Ang II-NADPH-derived superoxide signaling regulates the neuronal excitability through influencing activation of the HCN channel in the aortic baroreceptors from type 1 diabetic rats.

Normally a low level of the superoxide in the healthy cells is produced by leakage or short circuiting of electrons [87]. This tiny amount of the superoxide is able to kill microorganisms and to clean some cellular wastes [87,88]. Our recent study found that superoxide scavenger (tempol and polyethylene glycol-superoxide dismutase) did not affect activation of the HCN channels and cell excitability although they inhibited basal superoxide production in the aortic baroreceptor neurons from sham rats [43,44]. However, after acute administration of these chemicals in the aortic baroreceptor neurons from type 1 diabetic rats, the HCN currents and the cell excitability were normalized to the levels seen in the sham neurons [43]. One reasonable explanation is that only a higher level of the superoxide production can modulate the electrophysiological properties of the HCN channels.

An antioxidant, α-lipoic acid prevents diabetes-induced arterial baroreceptor dysfunction [89]. Are all endogenous oxidants involved in the attenuation of the arterial baroreceptor function in type 1 diabetes? Several reactive oxygen species (ROS) including superoxide, hydrogen peroxide, and hydroxyl radical are biologically derived from oxygen [90]. These chemically reactive molecules are highly unstable and short-lived [90]. In general, superoxide dismutase rapidly catalyzes two superoxide anions into a molecule of hydrogen peroxide, which in turn is quickly reduced to hydroxyl radical. The electrophysiological properties of ion channels are modulated by these reactive molecules [91-93]. In the aortic baroreceptor neurons, superoxide scavengers (tempol and polyethylene glycol-superoxide dismutase) have an ability to normalize diabetes-enhanced HCN currents to the level seen in sham neurons [43]. These data indicate that overproduction of superoxide but not hydrogen peroxide and hydroxyl radical is involved in the modulation of the HCN channels in the aortic baroreceptor neurons from STZ-induced type 1 diabetic rats.

One recent study has shown that the impaired baroreflex sensitivity correlates with the changes in the nucleus tractus solitary neural firing rates, which is affected by both afferent nervous behavior and nucleus tractus solitary cells themselves in the STZ-induced type 1 diabetic rats [95]. The collision experiments in the rabbit nodose ganglia have found that somata and central axons of the nodose neurons modulate the visceral afferent neuronal signals to the central nervous system [96]. One review paper has concluded that nodose ganglion neurons can be able to integrate the various received signals for the modulation of vago-vagal reflex [97].

A method for evaluation of the arterial baroreflex is to examine the changes of blood pressure and heart rate induced by electrical stimulation of baroreceptor-containing nerve (aortic depressor nerve), which is widely accepted by researchers [98-100]. The advantages for this method include: 1) the aortic depressor nerves of rabbits, rats, and mice contain only baroreceptor afferent fibers and no functional chemoreceptor afferent fibers for the transmission of input signals [101-104]; 2) direct electrical stimulation of the aortic depressor nerve is to bypass the mechano-viscoelastic coupling between changes in the aortic arterial vascular walls and afferent nerve endings; 3) easily changing the frequency and intensity of stimulus can differentiate the reflex responses to activating A- and C- afferent fibers. Our studies have shown that type 1 diabetes significantly attenuated the arterial baroreflex sensitivity measured by the reflex responses of blood pressure and heart rate to the electrical stimulation of the aortic baroreceptor nerves [12,105]. Additionally, local microinjection of exogenous Ang II into the nodose ganglion could mimic the diabetes to decrease the arterial baroreflex sensitivity [12]. Furthermore, our studies also found that microinjection of AT1 receptor antagonist, NADPH oxidase inhibitor, superoxide scavenger, or HCN channel blocker into the nodose ganglion significantly improved diabetes- or exogenous Ang II-induced impairment of the arterial baroreflex sensitivity [12,105]. These data provide the direct evidence that Ang II-superoxide-HCN channel signaling contributes to impairment of the arterial baroreflex sensitivity in STZ-induced diabetic rats. 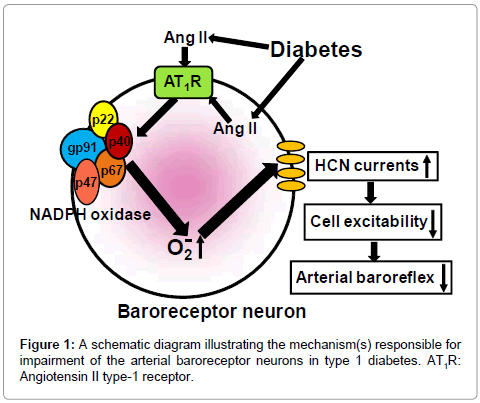 This study was supported by a Scientist Development Grant 0730108N from American Heart Association National Center (to Y.L. Li) and by National Heart, Lung, and Blood Institute grant HL-098503 with title Dysfunction of Baroreceptor Neurons in Heart Failure: Cellular and Molecular Mechanisms.

Copyright: © 2013 Li YL. This is an open-access article distributed under the terms of the Creative Commons Attribution License, which permits unrestricted use, distribution, and reproduction in any medium, provided the original author and source are credited.