The rainy season stretches from July to the end of September in Indian sub-continent. During this period, the South-West Monsoons pick up moisture from the Bay of Bengal and blow over the state of West Bengal. Most of the annual average rainfall of 175 cm about 125 cm occurs during this period. Heavy rainfall of above 250 cm is observed in the Darjeeling, erstwhile Jalpaiguri (from 2014 the district has been divided into two administrative unit viz Jalpaiguri and Alipurduar) and Cooch Behar district. Among these districts, Jalpaiguri district is the only district of West Bengal, situated in the foothill region of eastern Himalaya. The total areal extent of this district is 6227 km2. Taking consideration about the areal extent IMD (Indian Meteorological Development) has been established total eight metrological station within this district. Theissen Polygon has been applied to manage these eight station to find out the exact rainfall pattern in this spatial extend. Present paper is to represent the variation of monsoon rainfall in respect of depth, volume and probability in same physiographic condition within large areal extend.

The climate of the district is Cwg as per Koppen’s analysis of Indian climate. Cwg refers to monsoon type climate with dry winter. It is mesothermal climate with average temperature the cold months being less than 18°C (10.8°C) in Jalpaiguri. The maximum temperature is recorded in July-August when it is 30.9°C. It is situated on an extensive piedmont plain lying on the windward side of southern Himalayan forelands.

Rainfall is high particularly from June to the middle of October due to south-west monsoons. The winter receives scattered rains from north-east monsoons having no influence on any flood hazard event. The atmosphere is highly humid throughout the year. Highest average rainfall is 3110 mm and it is associated with the occurrence of floods.

In order to evaluate the spatial and temporal rainfall quantity, Thiessen Polygon is one of the widely used techniques and important method. Its calculation method is fast, simple and somewhat accurate. With this method, the calculation of rainfall is simple, in a way that only the station’s rainfall amount and the calculated station weight, the area of the influence of each station (also called Theissen Constant or Area Factor) are required. Thiessen Polygon method is a standard method for computing mean areal precipitation (MAP) for the area having more or less homogeneous topographic as well as meteorological features [1]. As the district has large areal extent and having more or less homogeneous topography with variation in monsoon rainfall, Thiessen Polygon is a most appropriate technique to follow the spatial and temporal variation of monsoon rainfall within the district.

The study area comprises erstwhile Jalpaiguri districts of West Bengal which is situated in the foothill of eastern Himalaya in West Bengal. The district is geographically situated from 26°16'35'' North to 26°59'30'' North and from 88°04’59’’East to 89°55'20'' East and comprising an area of 6227 km2 [Jalpaiguri’-District Gazetteer]. The main objectives of this paper are:

Data Base And Methodology

Thiessen Polygon method is an interpolation method used for analysis of rainfall distribution data. It uses point datasets [3,4]. It helps to find out rainfall depth or area-weighted rain for a set of rainfall stations. The depth of rainfall is a ratio of rainfall vis-a-vis respective polygonal area covering a concerned region. Here polygon method has been applied to find out the pattern of area-weighted rainfall on the basis of rainfall data for eight IMD stations in Jalpaiguri district. For this purpose, the rain-gauge locations are plotted on a map. Straight lines are drawn joining the adjacent rain gauge locations to form triangles. Perpendicular bisectors are described to each side of all the triangles. These bisectors define a set of polygons one for each station. The polygonal area around each rain-gauge station is measured. The average weighted rainfall P is computed as follows:

where, P1, P2………………Pn is the amount of rainfall recorded at the respective rain-gauge station;

A1, A2………………An is the polygonal area of the concerned raingauge station.

Therefore, Eq. 1 can be written as follows:

Thiessen polygon gives equal weight to all the rain-gauge stations regardless of their locations. The study area represents eight Thiessen polygons having one rain-gauge station each (Table1). These eight polygons are denoted as A, B, C, D, E, F, G, and H. The orographic diversity of the area, however, has not been taken into account in delineating the polygons. Isohyets have also been drawn for the district on the basis of the average rainfall of different IMD stations (Figure 2). 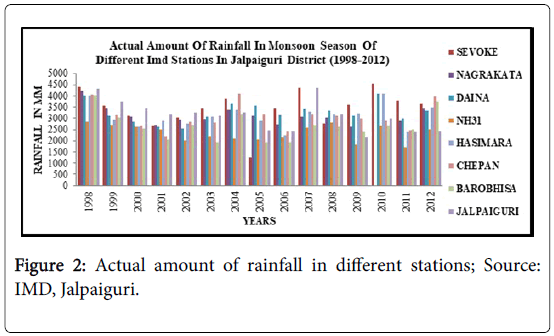 The district of Jalpaiguri received the maximum amount of rainfall in the monsoon season. The intensity of rainfall varies throughout the district. As the district is 6227 sq.km and extended in east-west stretch rainfall and temperature vary one corner to another corner [5]. To reduce such variation IMD (Indian Meteorological Department) has established eight stations throughout the district. The stations are Sevoke, Nagrakata, Diana, NH-31, Hasimara, Barobhisa, and Jalpaiguri. These IMD stations are situated over different drainage basin.

Table 1 states that Jalpaiguri covers the largest Thiessen polygonal area (1324.5 km2) followed by Hasimara (1065.4 km2), NH 31 (844.3 km2) and others and also have the least area under Diana rain-gauge station (473.7 km2). But by the depth of rainfall Hasimara (the only observation station for the Torsa) ranks 1st (529.27 mm) while Jalpaiguri (one of the two observation stations for the Tista) ranks 6th (281.72 mm). The inconsistent nature is further reflected when Figures 3 and 4 are compared. The actual isohyetal distribution indicates more rainfall to the NW of the study area [rainfall above 3200 mm] (where the Sevok rain-gauge station registers maximum rainfall of 3433.2 mm) while by depth of rainfall Hasimara in the north-east (near the Buxa hills adjacent to Bhutan border) and Nagrakata in the north (adjacent to Darjeeling and Bhutan border) experience more intense rainfall (Figure 3). Figure 4: Distribution of equal depth of rainfall in Jalpaiguri district. (Source: Prepared by the author).

These explain Hasimara and Nagrakata as the two most latent transmission pockets of rainwater in the district which deliver huge overland flow. It may further be mentioned here that the average of area-weighted rainfall for the district is P=Σ [Pi × Ai/A]=3006.08 mm, which is a high amount of rain. Secondly, the average rain depth with reference to the 08 rain gauge stations of Jalpaiguri is 328.09 mm. Thirdly, the volume of rainwater=Σ [Pi × Ai]=18718869.14 mm/ km2=87188.69 × 105 m3.

The SD and CV of the depth of rainfall have further being calculated followed by their probabilities to show the nature of inherent diversities in the distribution of depth of water as well as their possibility of occurrence [6]. These values have been shown in Tables 2 and 3.

Table 2: Computation of SD and CV of Depth of rainfall; Source: Computed by author.

Table 3: Computation of probability of depth of rainfall; Source: Computed by author.

Table 4: Computations of Volume of rainfall; Source: Computed by the author.

It appears from the Figure 3 that isohyets divide the district into four isohyets zones of rainfall zones as follows (Table 5).

Rainfall data recorded from 1998-2012 at Sevoke, Nagrakata, Diana, NH-31, Hasimara, Chepan, Barobhisa, and Jalpaiguri have been worked out for a 15-year average (Mean), Standard Deviation (SD), Co-efficient of Variation (CV) and other associated measures and the result have been given in Table 6.

Table 6: Computation of mean, Standard Deviation (SD) and Co-efficient of Variation (CV) of rainfall at eight IMD stations in Jalpaiguri district; Source: Data provided by IMD and Compiled by author.

Table 7: Probability of Rainfall at eight IMD stations of Jalpaiguri; Source: Computed by the author.

The research sought to find the applicability of the Thiessen polygon method, as recommended by hydro-meteorologists and climatologists, for the purpose of estimating area rainfall probability, depth and volume in the Jalpaiguri in West Bengal, India. The rationale behind the research is multi-faceted. One of the most important weather and climate elements in Jalpaiguri is rainfall, which is the source of water as well as the source of the flood in the district. Therefore, there is a need to know, and also estimate, the mean rainfall amounts, volume, and the probability of rainfall in and around the IMD stations of the district.

The Jalpaiguri district of West Bengal is selected for study because; here flood is the recurrence event. Almost every year flood hit the district and devastates a massive. Due to its physiographic position the area receives the maximum amount of monsoon rainfall.

The map showing IMD station point values gives the rainfall at points that represent the vast area. Such a result is unacceptable, for example, for planning purpose. The Theissen polygon method was therefore used to create territorial boundaries for each of the rainfall stations. The polygon so created involved the division of the catchment into a number of separate territories, each of which was focused on a single rainfall station.

Copyright: Â© 2018 Das M. This is an open-access article distributed under the terms of the Creative Commons Attribution License, which permits unrestricted use, distribution, and reproduction in any medium, provided the original author and source are credited. 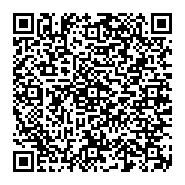