Objective: To elucidate how iron deficiency anemia influence the natural history of diabetes mellitus and to study the effect of iron indices, mitochondrial oxidative capacity and oxidative stress on insulin resistance and secretion in established cases of type 2 diabetes.

Conclusion: Iron deficiency anemia is associated with decreased mitochondrial oxidative capacity and insulin secretion with no change in insulin sensitivity. This prompts us to question whether chronic IDA predisposes to early development of diabetes especially where both diabetes and IDA are highly prevalent. Both diabetes and iron deficiency anemia can together worsen the oxidative stress and the pathophysiology of diabetes mellitus despite improvement in insulin resistance.

Increased iron stores have been found to predict the development of type 2 diabetes mellitus, while iron depletion was protective [1]. Iron induced damage might also enhance the development of chronic diabetes complications. Oxidative stress and inflammatory cytokines influence these relationships in amplifying and potentiating the initiated events [2].

Iron depletion has been demonstrated to be beneficial in coronary artery responses, endothelial dysfunction, insulin secretion, insulin action and metabolic control in type 2 diabetes mellitus [2]. All these studies show that iron is intimately linked to human pathophysiology.

Interrelationship between Glucose and Iron Metabolism

Regulation of iron uptake by insulin occurs in parallel with its effects on glucose transport [3]. Insulin causes a rapid and marked stimulation of iron uptake by fat cells, redistributing transferrin receptors from intracellular membrane compartments to the cell surface. Insulin is also responsible for the increased ferritin synthesis in cultured rat glioma cells [4]. Studies have shown that iron influences insulin action, by interfering with insulin inhibition on glucose production by the liver. Hepatic secretion and metabolism of insulin is reduced with increasing iron stores, leading to peripheral hyperinsulinemia [5].

Correlation studies between iron metabolism and mitochondrial oxidative markers and their influence on glucose metabolism, insulin secretion and action, especially in the setting of iron deficiency anemia are lacking in the literature. Hence this type of study was planned to investigate the role of iron deficiency in type 2 diabetes mellitus cases.

The study was approved by the Osmania Medical College Ethical committee, and the work was carried out in the Department of Endocrinology, Osmania General Hospital, in collaboration with Sai’s Institute of Endocrinology, Banjara hills Hyderabad, A.P, India.

All the patients and healthy controls were enrolled after informed consent was obtained, and thorough physical and medical examination was done to rule out any acute or chronic systemic illnesses. All the patients were screened for normal LFT, RFT, lipid profile, TSH, and stool for occult blood. Subjects with history of smoking, alcoholism, steroid medication and pregnant women were excluded from the study.

Iron deficiency anemia group with and without diabetes were selected based on WHO standards of hemoglobin concentration less than 12 g/dl in females and less than 13 g/dl in males, and with microcytic and hypochromic slide picture and all these patients were found to have low iron and ferritin levels as compared to controls. Diabetes groups with and without iron deficiency anemia were selected based on HbA1c and fasting blood glucose according to ADA diagnostic criteria. All the diabetes patients enrolled in the study were newly diagnosed and were not on any antidiabetic medications at the time of the study. None of the subjects in all four groups were on iron supplementation (Table 1).

Under aseptic conditions, blood samples (12 ml) were drawn from antecubital veins of all the subjects. 4 ml blood was transferred into sodium citrate vacutainers for the separation of WBC for the isolation of mitochondria and to assess the activity of complex IV cytochrome C oxidase. 2 ml of blood sample was collected in EDTA vacutainers for complete blood picture and HbA1C, 6 ml of blood sample was transferred into plain vacutainer, was allowed to clot for 30 minutes and then centrifuged at 2000 rpm for 15 minutes for clear separation of serum. Serum was taken for the analysis of iron indices, inflammatory markers, and insulin. Fasting blood sugar was estimated from the serum, separated in fluoride vacutainers.

4 ml of the whole blood was collected in sodium citrate vacutainers, diluted in 1:2 ratios with normal saline. The diluted blood was layered over a HI media’s Hisep LSM isoosmotic, low viscosity medium containing polysucrose and sodium diatrizoate adjusted to a density of 1.0770 ± 0.0010 g/ml solution [7] and centrifugation was done at 2000 rpm for 20 minutes. Erythrocytes get sedimented and a band of mononuclear leukocytes above Hisep LSM was formed which was aspirated by using a clean and dry Pasteur pipette. Aspirated layer of mononuclear leukocytes was washed twice with phosphate buffer of pH 7.6 and centrifuged at 1500 rpm. The collected WBC pellet was further processed for the isolation of mitochondria and mitochondrial activity assay (Cytochrome C oxidase activity Assay measured at 550 nm in 10UV genesis spectrophotometer). Kits were purchased from Biochain Institute (CA, USA).

All values of analysed parameters were expressed as mean ± SD. Statistical analysis was performed using the Statistical Package for Social Sciences (SPSS/PC; SPSS-9, Chicago, USA). One-way analysis of variance (ANOVA) was used to compare the mean values in the four groups followed by multiple comparison post-hoc tests. Pearson’s correlation was applied to correlate between the parameters. A p value of <0.05 was considered statistically significant.

3. In T2DM with IDA marked improvement in insulin sensitivity correlated well with a significant increase in IL-6.

4. Significant decrease in mitochondrial oxidative capacity was consistently observed in all 3 groups compared with control group. 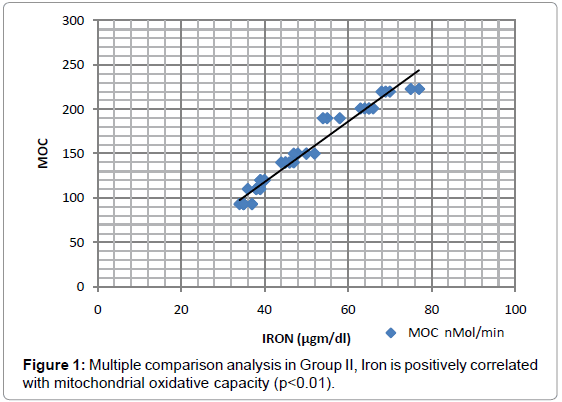 Cytochrome c oxidase is an iron based complex IV enzyme of the electron transport chain which catalyses the terminal oxidation causing the transfer of two electrons one at a time to molecular oxygen, where there is a maximum chance for the formation of oxygen free radicals [6,10]. Optimal balance between oxidant and antioxidant system is maintained within the normal mitochondria. Thus decrease in iron leads to decrease in the activity of the cytochrome c oxidase and decrease in mitochondrial oxidative capacity in the iron deficient state.

In IDA decrease in TAOC has been demonstrated vs. controls in our study. This in addition to the decreased cytochrome c oxidase activity contributes to the imbalance between oxidants and antioxidants within the mitochondria and further diminishes the mitochondrial oxidative capacity.

In this group the measured MOC positively correlated with insulin secretion i.e., HOMA B (Figure 2). Mitochondriae integrate and generate metabolic signals by coupling glucose recognition to insulin secretion [6]. Normally glucose oxidation within the mitochondria produces ATP, and increases ATP/ADP ratio. Likewise within the beta cells ATP/ADP ratio is primarily regulated by the mitochondrial oxidative capacity. Increase in ATP/ADP ratio contributes to inhibition of potassium channels, which lead to plasma membrane depolarization, opening of voltage gated calcium channels, calcium influx and secretion of insulin. This explains the finding that decrease in MOC is positively correlated with decrease in insulin secretion i.e. HOMA B. Hence a functionally integral electron transport complex is essential for the optimal function of mitochondria [6]. 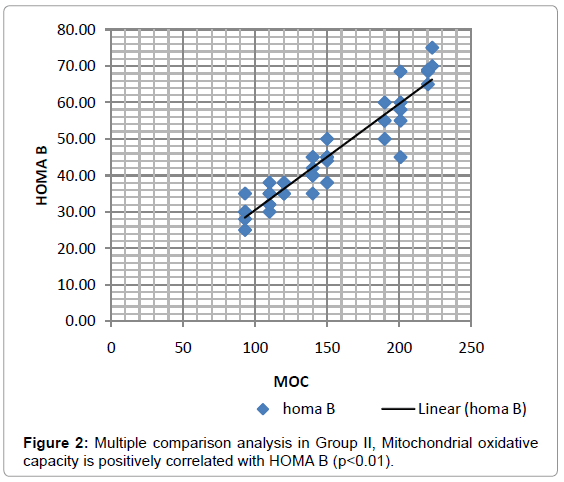 Also in other studies similar levels of glycemia in IDA was associated with higher concentrations of HbA1c [13] but we found no significant change in HbA1c and inflammatory markers such as IL-6 and TNF alpha in IDA vs controls. 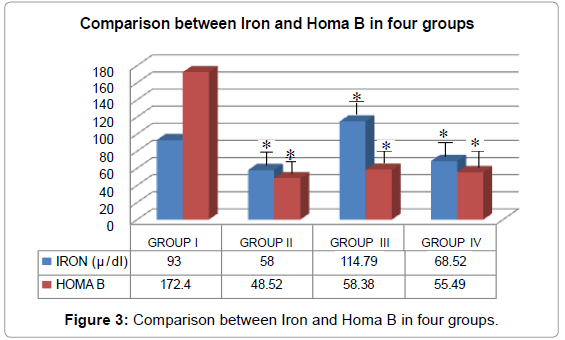 Figure 3: Comparison between Iron and Homa B in four groups. 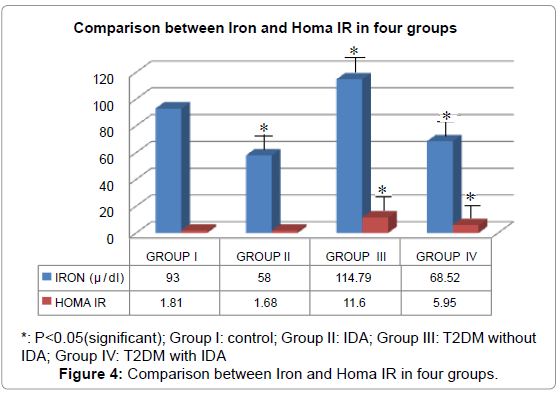 Figure 4: Comparison between Iron and Homa IR in four groups.

Other iron indices such as transferrin and ferritin levels were found to be significantly elevated in this group. Transferrin is the binding protein responsible for the transport of iron and is upregulated in iron deficiency anemia to maximize the efficiency of iron transport from the intestine to the tissues. Similar upregulation of transferrin occurs in diabetes mellitus even in the presence of adequate iron due to the decreased ability in transferring iron to tissues consequential to decreased binding of ferrous iron to glycated transferring [18]. Fujimoto et al. found glycation of transferrin decreases its ability to bind ferrous iron there by increasing the pool of free iron and stimulation of ferritin synthesis [19]. Glycated holotransferrin is additionally known to facilitate the production of free oxygen radicals, such as hydroxide, that further amplify the oxidative effects of iron [19].

Significantly decreased TAOC which reflects increased oxidative stress has been documented in all the three groups in comparision to the controls.

Elevated free iron and ferritin levels in addition to the significantly decreased TAOC contributes to the oxidative stress by formation of reactive oxygen species via Fenton and Haber-weiss reaction [20,21].

Cussimanio et al. [22] found that in diabetes mellitus, hyperglycemia induced glycation of hemoglobin and myoglobin leads to the formation of advanced glycated end (AGE) products on lysine residues of the protein chain which also causes the destruction of heme group and release of iron from these two proteins [22-24]. Free iron released further enhances the process of AGE formation through Fenton reaction. This circle reaction promotes oxidative stress and damage which lead to the development of diabetic complications.

In diabetes mellitus in addition to oxidative stress caused by AGEs [11,12,20-22,25], increased shunting of glucose through the polyol (sorbitol), pathway also results in enhanced production of superoxide anion. Enzymatic sources of reactive species in diabetes include nitric oxide synthase, NAD(P)H oxidase and xanthine oxidase [26,27]. The reactive oxygen species and reactive nitrogen species generated by the enzymatic and nonenzymatic reactions contribute to the decreased total antioxidation capacity.

Increased oxidative stress correlates with increased insulin resistance and decreased beta cell secretion in diabetes mellitus by the activation of stress sensitive intracellular signaling pathways like nuclear factor nf-kβ, p38 mitogen activated protein kinases, hexosamines [28-30]. Studies have shown that in vitro, ROS and oxidative stress lead to the activation of multiple serine kinase cascades. The insulin signaling pathway offers a number of potential targets of these activated kinases, including the insulin receptor and the family of insulin receptor substrate protein (IRS-1 and 2). An increase in serine phosphorylation decreases the extent of tyrosine phosphorylation and is consistent with the attenuation of insulin action [31,32].

Type 2 Diabetes mellitus and Inflammatory markers, significantly increased TNF-α observed in this group correlated well with increase in HOMA IR (Figure 5). Stephens JM et al. in their work elucidated mechanisms underlying the TNF-α induced serine phosphorylation of IRS-1 which inturn inhibits the insulin receptor to autophosphorylate and its ability to phosphorylate on tyrosine residues, which are its major substrate. TNF-α reduces the transcriptional activity of glut-4 gene in murine adipocytes, and reduces mRNA transcription of a number of relevant proteins required for the insulin stimulated glucose transport. This includes GLUT-4, IRS-1, and insulin release from pancreatic beta cells [33-35]. 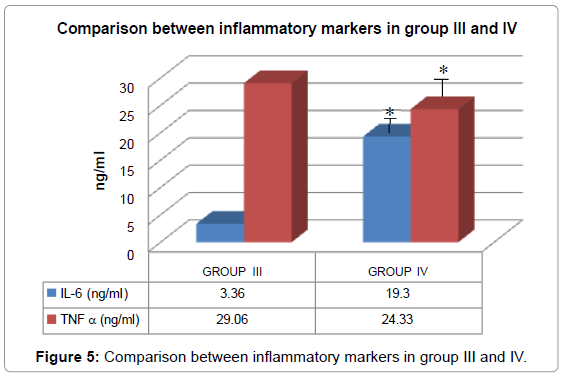 Figure 5: Comparison between inflammatory markers in group III and IV.

T2DM with IDA compared to T2DM without IDA

Statistically significant decrease in free iron, TNF-α and insulin resistance was observed in this group. Decrease in insulin resistance can be explained due to the decrease in serum iron and ferritin levels. Studies of Facchini [11] and Hua et al. [12] have shown that glucose turnover increases in iron deficiency, and this increase is primarily due to enhanced peripheral insulin responsiveness [3].

In contrast to other studies which indicated that low iron status improved insulin secretion and peripheral action [3,36,37], increase in Interlukin-6 as documented in this group of patients in our study showed a good statistical correlation with decrease in insulin resistance compared with patients of diabetes without anemia (Figure 6). 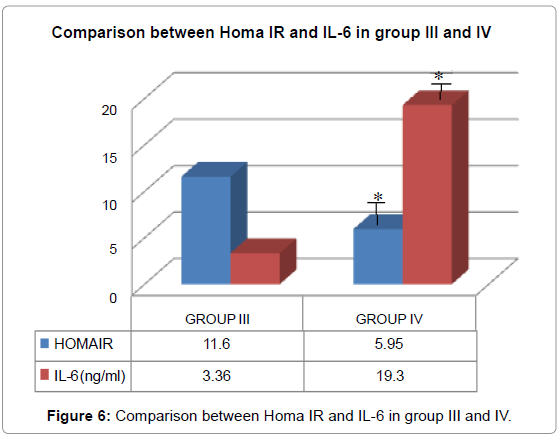 Figure 6: Comparison between Homa IR and IL-6 in group III and IV.

These findings are supported by the observations of Pedersen and Febbraio [38] that acute IL-6 infusion in different mice and human studies increases insulin sensitivity in skeletal muscle, but no significant change in insulin secretion.

Significant improvement in glycemic parameters, both fasting blood sugars and HbA1c observed in patients with DM and IDA in comparision to the patients of DM without IDA and can be explained on the basis of improvement in insulin sensitivity.

We acknowledge Dr. Vishnu Vardhan, Head of statistics department, National Institute of Nutrition, Hyderabad, for helping us in making the statistical report of the data and all the patients who made this study valuable through their participation in this study.

Copyright: © 2012 Ramesh J, et al. This is an open-access article distributed under the terms of the Creative Commons Attribution License, which permits unrestricted use, distribution, and reproduction in any medium, provided the original author and source are credited.