Results: Patients’ survival at 54 months in group 1, 2 and 3 was 27.8%, 73.8% and 80.2%, respectively (p<0.001). Magnesium was found to be an independent predictor of both mortality and hospitalizations, with a statistically significant decrease in mortality and hospitalizations observed at higher levels of magnesium. Magnesium levels were also negatively correlated with known cardiovascular risk factors and with serum creatinine. Patients with lower magnesium level were more likely to start a renal replacement therapy.

Conclusions: Lower magnesium levels result in a greater risk of cardiovascular mortality and hospitalization as well as an accelerated progression of renal disease to renal replacement therapy.

In the last few years there has been increasing evidence correlating abnormal serum Mg levels, particularly hypomagnesaemia, with all-cause mortality and different pathological conditions including hypertension, pro-inflammatory states, type 2 diabetes and its complications, and development of atherosclerosis and vascular disease, both in the general population and in patients with chronic kidney disease (CKD) [1-8].

Recent studies have suggested that hypomagnesaemia may be involved in the pathogenesis of CVD in CKD patients and, although the mechanism is still debated, there is growing evidence that lower Mg levels, shown to be a major risk factor for atherosclerosis, may also favor vascular calcification and development of CVD [9-13].

Previous observational [6,7] and interventional [14,15] clinical studies have already demonstrated that hypomagnesemia is associated with vascular calcification and cardiovascular mortality among patients with end-stage renal disease (ESRD).

Despite the interest in Mg and in understanding the exact pathophysiologic mechanisms of CVD in CKD, and although Mg has previously been presented as a possible predictor of cardiovascular outcomes in CKD patients [16], there is a scarcity of studies evaluating CVD in earlier stages of renal disease. In addition, there are many variables related to the risk of cardiovascular outcomes and the progression of kidney disease in the diabetic population, and the understanding of how these variables interact and are affected by different Mg levels still requires further investigation. In the present study we evaluated the association of serum Mg levels with cardiovascular mortality, hospitalizations, and progression of renal disease in type 2 diabetic patients with mild-moderate CKD.

An observational, prospective study involving 191 patients was conducted in our outpatient diabetic nephropathy clinic from December 2007 to May 2013.

The study was submitted to and approved by the administration and ethics committee. The study was conducted according to the principles of the Declaration of Helsinki, and study procedures were only performed after signing the informed consent.

All mortalities and hospitalizations motivated by causes other than cardiovascular events were also excluded.

Serum samples were collected at baseline in fasting patients and patients were divided according to the Mg groups. Samples were centrifuged and plasma was frozen at -80°C. The option to analyze Mg levels by groups rather than by a continuous variable was made in order to try to better differentiate the power of lower and higher Mg levels.

Mg groups were defined as: group 1 with serum Mg<1.2 mg/dL, group 2 with Mg 1.2–2.3 mg/dL and group 3 with Mg ≥ 2.3 mg/dL. The range values for each group resulted from the statistical determination of the 33rd and 66th percentiles of patients’ Mg levels.

We used descriptive statistics. For comparisons between groups we used the ANOVA test with Scheffé post-hoc. The Kaplan-Meier method for measuring patient survival was applied and a comparison between the three groups was based on the log rank test. The risk factors and their hazard ratio (HR) were calculated using a Cox regression for mortality and a multivariate logistic regression for hospitalization. All variables were added to the models as continuous variables, with exception of age, gender and Mg levels that were categorized. Simple linear regressions were used to investigate any possible correlation between Mg and renal disease and between Mg and cardiovascular risk factors. Differences were considered statistically significant for p-values <0.05. Statistical analyses were performed using the SPSS program, v17.0.

Patients were allocated into groups according to their serum Mg values. Group 1 encompassed 63 patients, and both groups 2 and 3 included 64 patients (Table 2).

Table 2: Comparison of variables among the 3 Mg groups. 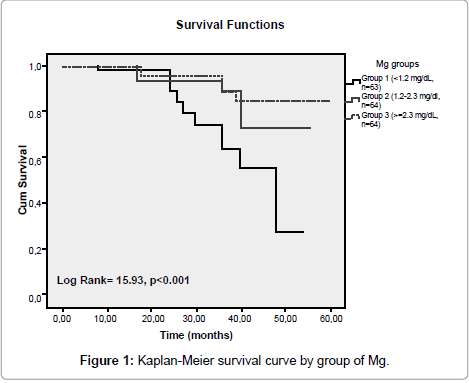 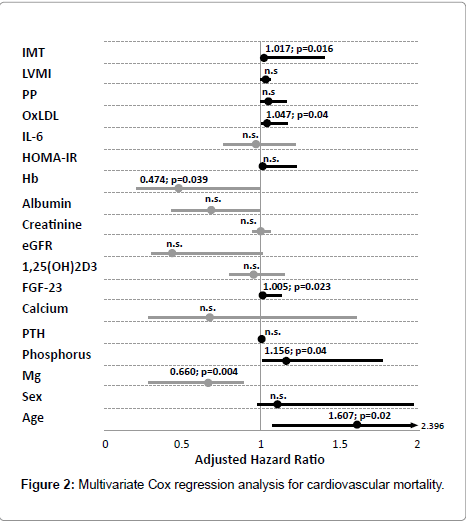 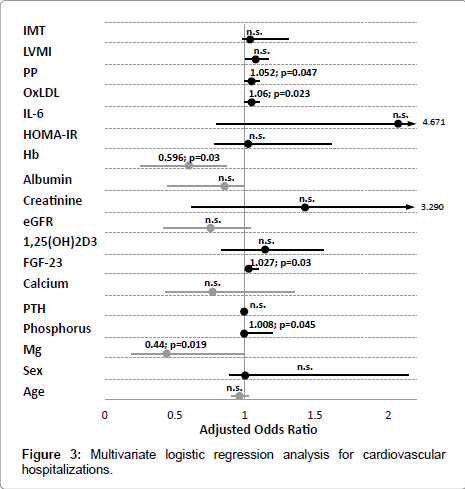 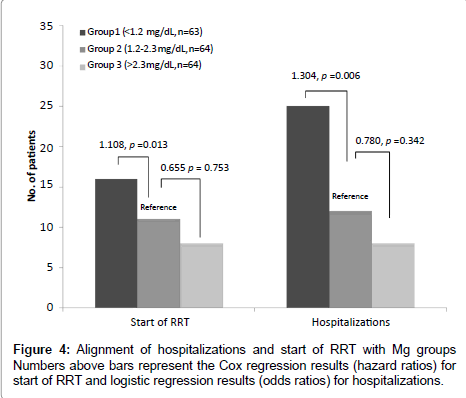 In this study we evaluated the association of Mg levels with mortality and hospitalization, as well as the relationship of Mg with progression or renal disease in type 2 diabetic patients with mild-moderate CKD.

The allocation of patients according to their Mg levels in tertiles resulted in a noteworthy distribution. As normal Mg serum levels are defined as 1.6-2.5 mg/dL [21], the group allocation roughly divided the patients in hypo-, normal- and hypermagnesaemic. The mortality results revealed significant differences between groups. In this study, patients with higher Mg levels have better survival rates than patients with lower levels. In addition Mg was found to independently predict patient survival, with a decreased risk of cardiovascular mortality associated with higher Mg levels. Since all three groups presented well-known cardiovascular risk factors, the attempt to identify a single factor responsible for the cardiovascular mortality results is probably not reasonable as it would not reflect the multifactorial nature of the disease. It is our understanding that these results might be explained by an overall disturbance of the mineral metabolism that manifests in an increased production of activating factors (e.g. phosphorus, calcium) and a decreased production of protective factors such as Mg.

The results of survival functions demonstrated that lower Mg levels are predictive of cardiovascular mortality in type 2 diabetics with mild-moderate CKD. Of course it is of notice that several parameters differ between groups. Most strikingly, the eGFR is lower in patients with lower Mg, which indicates a more severe chronic renal failure. Therefore the higher mortality could be due to a progress in disease. However, by calculating multivariate Cox regression, eGFR does not come up as an independent risk factor, whereas Mg does and with the lowest p-value. So it seems reasonable to draw conclusions regarding Mg and its association with mortality. To the best of our knowledge, this association has only been previously demonstrated for advanced stages of renal disease, in patients already requiring maintenance hemodialysis [3,7]. On the other side, studies examining Mg levels in diabetic patients without known CKD exist. These studies show that hypomagnesemia is a common problem in diabetics and suggest this to be a risk factor for renal deterioration [5,22]. Thus, our results fill this gap and raise interest for further analysis assessing the important role of Mg as a possible marker/predictor of cardiovascular mortality in the entire diabetic population.

We also approached the association of Mg levels with other wellknown factors of cardiovascular risk and renal disease. Our results suggested that Mg levels were inversely correlated with phosphorus, LVMI, IMT and PP, as well as with creatinine, an established marker for the assessment of renal function. Taking it all together, it seems that as Mg increases, renal function improves and cardiovascular risk decreased.

These data seem to be in accordance with previously reported in vitro and clinical studies that have already correlated lower Mg levels with vascular calcification [13,23,24], and cardiovascular mortality [25] in hemodialysis patients and also with progression to ESRD [22] as well as data from animal [26] and in vitro [27-29] studies stating that increased Mg levels protect against vascular calcification.

In addition, FGF-23 was also found to be an independent predictor of cardiovascular mortality and need of hospitalization for these patients. We were not able to find in the literature any manuscript evaluating the correlation between FGF-23 and Mg levels and cardiovascular mortality in this population. Thus, we believe these data can be a starting point for future and more robust studies to ascertain the real relationship between FGF-23 and diabetes as well as their implications on mortality and morbidity on patients with mild to moderate chronic kidney disease. When interpreting all the results together it seems plausible to assume that Mg exerts both cardio- and renoprotective roles. Thus, Mg levels might have a significant clinical relevance as a marker/predictor of cardiovascular mortality and need for hospitalization, and not least, a therapeutic role for Mg, especially in CKD patients with cardiovascular disease, should be considered.

The main limitations of this manuscript are the relatively small sample size and the limited statistical power of these analyses. However, these are preliminary results of a long-term project and already present new important insights regarding the association of Mg and cardiovascular mortality, as we believe this is the first time Mg is presented as a predictor of mortality and need of hospitalization in diabetic patients with mild-moderate CKD.

Nevertheless, we believe interventional, prospective studies with a big sample size and robust statistical analysis are required in order to confirm these associations and to reinforce the cardio and renoprotective roles of Mg especially in earlier stages of renal disease. Further, additional studies should assess a possible benefit of Mg supplementation as well as the mechanism behind it.

This study, and similarly to other independent studies conducted by the authors [30,31], bring new input to the diversified puzzle of upcoming variables other than traditional and non-traditional cardiovascular risk factors, that can possibly be translated and clinically used as predictors of mortality in earlier stages of CKD.

KG and JB are current employees of Fresenius Medical Care Deutschland GmbH. The remaining authors have no relevant conflict of interests to declare.

All authors of this research paper have directly participated in the planning, execution, or analysis of this study.

Copyright: © 2014 Silva AP, et al. This is an open-access article distributed under the terms of the Creative Commons Attribution License, which permits unrestricted use, distribution, and reproduction in any medium, provided the original author and source are credited. 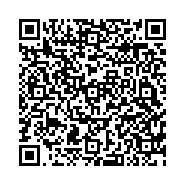