A type of exercise (Resistance Exercise Training – RET) that is markedly applied to increase muscle mass has been prescribed to prevent muscle atrophy from catabolic conditions such as, diabetes and chronic kidney disease. However, how this type of exercise modulates renal system remains unclear. It prompted us to apply progressive RET to STZ-induced diabetes rats in order to investigate renal environment. Progressive RET was applied to Wistar rats under following exercise program: 6 to 12 climbs/day, 5 days/week, 8 weeks, at 50 to 80% of maximal loading test. After streptozotocin injection, animals were divided into four groups: two control groups (non-exercised and exercised) and two diabetic groups (non-exercised and exercised) with 4 to 6 rats/group. Kidney weight (KW), muscle weight, proteinuria and protein level (assessed by Western blot and multiplex technology) were determined. It was found that RET did not protect exercised diabetic animals from loss of muscle mass. RET did not influence the performance in maximal loading test in diabetic groups (p>0.05); additionally exercised diabetic animals did not recover body weight (p>0.05). KW was preserved in exercised diabetic animals meanwhile proteinuria was lowering as well (15.83 ± 2.6 mg/24h) when compared to diabetic group (37.66 ± 3.2 mg/24h, p<0.05). We assessed upstream and downstream of mTOR and found significant decreases in PI3K, p-Akt and p-4EBP1 in kidneys of exercised diabetic animals (p<0.05). Moreover, we observed that kidney protein level of TGFβ-1 was markedly decreased in exercised diabetic animals. Under progressive RET program, kidneys may be functionally protected and mTOR-signaling pathway plays important role on renal environment. However, skeletal muscle showed no improvement under this program, suggesting different mTOR modulation among renal and muscle functions

Diabetic Nephropathy (DN) affects worldwide population and is the leading cause for end-stage renal disease. This complication is characterized by morphologic changes, including renal hypertrophy, augmented fibrosis and inflammation, increased proteinuria and also by a markedly impairment of renal function [1-3]. Increased kidney mass (i.e. renal hypertrophy) in DN is, in part, due to activation of mTOR (mammalian target of rapamycin, currently known as mechanistic target of rapamycin).

mTOR regulation includes cell growth, cell cycle, autophagy, and metabolism in several tissues such as, kidneys, skeletal muscle, vessels, heart and tumors. mTOR is an evolutionary conserved serine/threonine kinase and there are two complexes of mTOR that are functional and structurally different; complex 1 (mTORC1) is rapamycin (mTORC1 inhibitor) sensitive and is responsible for cell growth and proliferation. The complex 2 (mTORC2) does not respond to acute treatment of rapamycin and affects cell polarity and actin cytoskeleton; although both complexes can be activated by growth factors such as insulin and IGF-1, only mTORC1 responds to amino acids [4-6]. It is known that mTORC1 upstream regulation includes important proteins such as, lipid kinase phosphatidylinositol 3-kinase (PI3K), phosphatase and tensin homolog on chromosome 10 (PTEN), Akt (also known as protein kinase B) and tuberous sclerosis complex 1/2 (TSC1/2). The process begins with activation of PI3K that phosphorylates PIP2 to PIP3; PTEN dephosphorylates PIP3 back to PIP2 and prevents Akt activation [7]. However, failure to increase PTEN expression culminates in increased Akt phosphorylation, and TSC1/2 (downstream of Akt) is also phosphorylated releasing mTORC1 from its inhibiting action. Downstream of mTORC1 is characterized by activation of ribosomal protein and S6 kinase and phosphorylation of eukaryotic initiation factor 4E biding protein 1 (4EBP1), which increase cell growth [8-10].

RET is an important and essential applied method to gain muscle mass and it has been markedly accepted as treatment for skeletal muscle atrophy under catabolic conditions [4,5,11]. In skeletal muscle, mTORsignaling pathway have been shown to play crucial role in hypertrophy [12,13]. Although, the joint position statement by American College of Sports Medicine (ACSM) and American Diabetes Association provided important information regarding prescription of RET and skeletal muscle adaptation in diabetes [6], little is know regarding how progressive RET modulates renal environment.

Hornberger et al. [14] demonstrated that a ladder climb apparatus is a well tool to improve skeletal muscle hypertrophy in normal rodents. We used the same apparatus to study the mechanism by which progressive RET might influence renal environment in diabetic rats. Additionally, because it is not fully understood how RET modulates renal system in diabetes mellitus, we believe that progressive RET might modulate kidney environment through PI3K/Akt/mTOR-signaling pathway.

Two months old male Wistar rats (n=4 to 6/group) obtained from Center of Biology and Medicine for Experimental Models of Federal University of Sao Paulo (CEDEME), were used throughout this study, and randomly assigned into 4 groups: two control groups (nonexercised and exercised) and two diabetic groups (non-exercised and exercised). Animals were fed standard laboratory chow and given tap water ad libitum while housed (4-5 per cage) in a temperature and humidity-controlled room (22°C and 60 ± 5%), with a 12:12 h lightdark cycle (lights on at 7 a.m.). All experimental procedures followed Institutional Guidelines for Care and Use of Laboratory Animals, and the Ethic´s Committee of Federal University of Sao Paulo, Brazil approved the protocols (Process number: 0185/11).

Diabetes was induced after 12h fasting by a single tail vein injection of streptozotocin (STZ, 50mg kg-1 body weight; Sigma, Chemical, St. Louis, MO; in freshly prepared 0.01M citrate buffer, pH 4.5) [15,16]. Control animals were injected with citrate buffer only. Following this period, animals were kept for 3 days with free access to food and water. STZ-injected animals exhibited massive glycosuria and hyperglycemia within few days, and diabetes was confirmed by measuring fasting blood glucose concentration 5 days after drug injection. Fasting blood glucose was determined in blood samples obtained by tail prick, by using a strip operated glucometer (Accu-Check® Sensor, Roche, Swiss) and rats were considered diabetic if they had fasting plasma glucose >250 mg/dL. In those animals we measured basic parameters such as body weight and renal function; we also measured protein level by western blot and multiplex technology. For that purpose, animals were anesthetized (ketamine 80 mg/kg + xylazine 12 mg/kg, IP) and a peritoneal incision was made to carefully remove kidneys. Subsequently, kidneys were weighted and immediately placed in liquid nitrogen. Next, kidneys were storage in -80ºC.

We used kidney sample to assess transformer growth factor beta 1 (TGFβ-1) by multiplex assay (Milliplex xMAP multiplex technology – Millipore Billerica, MA, USA). Anti-TGFβ-1-labeled beads were re-suspended and aliquoted into a pre-washed 96 well filter plate. Twenty-five microliters of kidney sample or standards/controls were mixed with the beads in the assay buffer and incubated overnight at 4ºC. Subsequently, the plate was incubated with biotinylated detection antibody and streptavidin-phycoerythin solution and run on the Luminex 200™ instrument (Luminex, Austin, TX).

Results are expressed as means ± SEM. Statistical differences were determined by two-way analysis of variance (Two-way ANOVA) and Bonferroni post-hoc test; It was used GraphPad Prism 6.0 Software to analyze the data. Differences were considered significant at p<0.05. 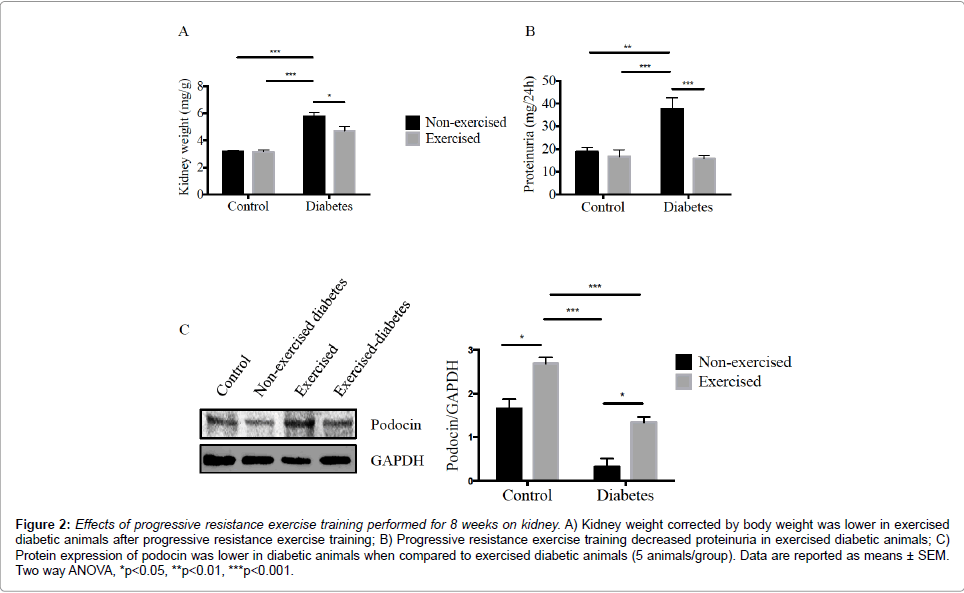 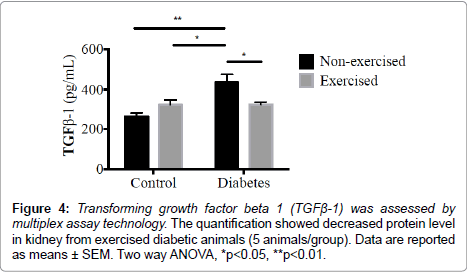 Markedly loss of body weight is a characteristic set from STZinduced diabetic rats. As showed in Table 1, diabetic animals showed decreased body weight when compared to controls groups (exercised or not); additionally, exercised diabetic animals do not increased (p>0.05) body weight after 8 weeks of progressive RET. Although, RET is traditionally performed to increase muscle mass, surprisingly, we found that progressive RET was not able to increase muscle weight of extensor digitorium longus (EDL) and plantaris in exercised diabetic animals (p<0.05). Also, characteristic gain of muscle force after RET was not statistic significantly between diabetic groups (p>0.05). Moreover, these outcomes were independently of blood glucose level (p>0.05).

PI3K/Akt/mTOR-signaling pathway might be related with these adaptations and is crucial for understanding the complex mechanisms related to increased kidney weight and diabetes complications. In this study, kidney weight gain could be correlated to augmented expression of PI3K, p-Akt and p-4EBP1; also quantification of TGFβ-1 in kidney was found increased in non-exercised diabetic animals. Potential effects of progressive RET were noticed and we observed attenuated and significant levels of protein expression (PI3K, p-Akt and p-4EBP1, and TGFβ-1 concentration) in kidney from exercised diabetic animals after 8 weeks of exercise. These outcomes suggest that progressive RET under 50 to 80% of maximal loading test improves renal system, however does not avoids diabetes-induced damage in skeletal muscle.

Mechanisms related to renal hypertrophy have been described in the literature. In compensatory renal hypertrophy by unilateral nephrectomy, the remaining kidney increases size and activation of mTOR is the main mechanism responsible for hypertrophy. Additionally, using rapamycin it could be blocked [18]. In DN, it has been shown that rapamycin was able to delay the progression of renal hypertrophy [19].

Catabolic condition-induced skeletal muscle atrophy, such as diabetes and CKD, normally lead skeletal muscle to loss of muscle weight and function, and this is at least in part due to increased inflammation and insulin resistance [10,20-23]. As we known, activation of muscle fibers by resistance exercise training (RET) or injury may increase mTORC1 activation improving protein synthesis and regulating several cellular process including translation and transcription [2,10,24]. On the other hand, atrophy process is provided by increased atrophic factors and decreased hypertrophy factors [10]. Protein breakdown may be increased through the activation of the ubiquitin-proteasome system that is markedly involved in muscle atrophy increasing mRNA and proteins known as atrogenes such as, MuRF1 and Atrogin-1 [25- 27]. On the other hand, catabolic conditions may decrease skeletal muscle hypertrophy with no involvement of atrogenes, by decreasing activation of mTOR and its downstream, such as p70 S6K and 4EBP1 [10,21,28-31]. PI3K/Akt/mTOR-signaling pathway has been positively and extensively implicated on skeletal muscle hypertrophy under pathologic conditions. Only two weeks of muscle overload was reported to be sufficient to induce muscle hypertrophy and recruit satellite cells, which are responsible for skeletal muscle regeneration in a murine model of CKD [11]. In this study, skeletal muscle mass was not improved by progressive RET and it suggests that PI3K/Akt/mTOR-signaling pathway was not modulated or at least was not fully activated by RET; additionally, muscle force showed no difference between diabetic groups (Table 1). The fact that rats trained 5 days per week may not be excluded to explain skeletal muscle impairment; moreover, the ACSM guidelines recommend that RET must be performed as complement to aerobic exercise training [6]. Altogether, these outcomes might explain the absence of traditional response of skeletal muscle to progressive RET protocol used in this study.

The results from our study are encouraging, because it demonstrates that RET could be an important tool to prevent the evolution of diabetic nephropathy. It is also possible that preventing urinary protein content by RET, increase the adhesion to a regular RET program. Surprisingly, our study also demonstrates that skeletal muscles were not improved by our RET regimen, it suggests that different intensity or at least other type of exercise should be incorporated into a regular exercise program. As we known, other types of exercise, such as endurance exercise, are widely applied as treatment to diabetes and CKD [3,32,33]. Our group has demonstrated the protective effects of endurance exercise in diabetic animals that performed 14 weeks of running training on renal function [3]. It suggest that both, RET and endurance exercise should be applied for people who have diabetes.

In summary, this study provides important information regarding renal damages in DN and beneficial effects on kidneys induced by progressive RET. Kidneys from exercised diabetic rats decreased size and proteinuria, and increased podocin expression, this may improve renal function; additionally, PI3K/Akt/mTOR-signaling pathway modulates renal hypertrophy promoted by progressive RET. Finally, skeletal muscle from exercise diabetic animals were not improved after RET, suggesting that the prescription of RET used in this study induces different modulation among organs such as, kidneys and skeletal muscle. Different intensity of RET must be studied to provide complete beneficial effects of RET.

We would like to thank Fapesp (Sao Paulo Research Foundation, process: 2011/20109-1) for supporting this research, and FOR (Oswaldo Ramos Foundation).

We also would like to thank Dr. Clara V. Razvickas for the excellent technical support.

Copyright: © 2014 Silva KAS, et al. This is an open-access article distributed under the terms of the Creative Commons Attribution License, which permits unrestricted use, distribution, and reproduction in any medium, provided the original author and source are credited.