Marine organisms are rich sources of biologically active metabolites [1]. Ubiquitous sponges from the genus Haliclona (order Haplosclerida) have been known to produce a wide diversity of bioactive compounds, alkaloids with unique structures [2-4], cyclopeptides [5] or aliphatic compounds [6,7]. In our continuing search for structurally unique metabolites from marine invertebrates, the sponge Haliclona fascigera , collected in Mayotte, was investigated, resulting in the isolation of the new acetylenic fatty acid, (2S*,5S*, 6Z)-2,5-epoxydocosan-6-en-21-ynoic acid (1) (Figure 1). In this study, the isolation and structure elucidation of 1 were described. 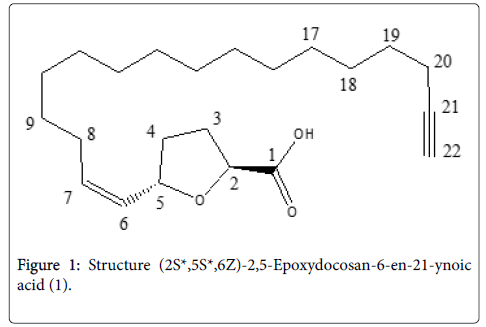 The sponge Haliclona fascigera (phylum Porifera, class Demospongiae, order Haplosclerida, family Chalinidae) was collected in May 2013 in Passe Bouéni, Mayotte (12°58.592’ S, 44°58.005’ E at 20-27 m depth). One voucher specimen (RMNH POR 8713) was deposited in the Naturalis, Netherlands Centre for Biodiversity. Sponge samples were frozen immediately and kept at -20 °C until processed.

Evaluation of the biological activities

Evaluation of the antimicrobial activity: (2S*,5S*,6Z)-2,5- Epoxydocosan-6-en-21-ynoic acid (1) was tested against five marine bacterial strains commonly found on biofilms, Roseobacter litoralis (ATCC 495666), Shewanella putrefaciens (ATCC 8071), Vibrio carchariae (ATCC 35084), Vibrio aestuarianus (ATCC 35048), Vibrio natrigens (ATCC 14048) and Vibrio proteolyticus (ATCC 15338). Bacterial growth rates were determined according to the methods of Thabard et al. [8]. Bacterial suspensions (100 μ aliquots, 2 × 108 colony forming units/mL) were aseptically added to the compound containing microplate wells (0.01-10 μg/mL), and the plates were incubated for 48 h at 26°C. Media only was used as a blank. Bacterial growth was monitored spectroscopically at 630 nm. The minimal inhibitory concentration (MIC) for bacterial growth was defined as the lowest concentration which results in a decrease in OD.

Evaluation of the antiplasmodial activity: Activity against Plasmodium falciparum chloroquine-sensitive 3D7 strains was assessed following the procedure already described in Frédérich et al. [9]. The parasites were obtained from Prof. Grellier (Museum d’Histoire Naturelle, Paris, France). Each compound, fraction and extract was applied in a series of eight 2-fold dilutions (final concentrations ranging from 0.8 to 100 μg/mL for an extract and from 0.08 to 10 μg/mL for a pure substance) on two rows of a 96-well microplate and were tested in triplicate (n=3). Parasite growth was estimated by determination of lactate dehydrogenase activity as described previously [10]. Artemisinin (98%, Sigma-Aldrich) was used as positive control. 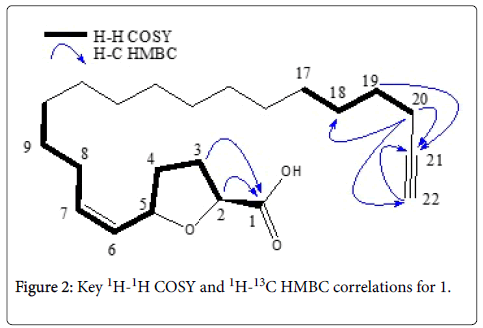 Even in the golden age of NMR, incorrectly assigned natural products are not uncommon. Hundreds of structural revisions have been published in the last decades, ranging from profound connectivity to stereochemical errors [11]. Modern computational chemistry, especially the successful application of NMR calculations in the assignment or reassignment of complex molecular structures, has significantly contributed to prevent these misinterpretations [12,13].

In order to determine relative configuration of C-2 and C-5 atoms of 1, Density Functional Theory (DFT) calculations were done on 2R , 5S and 2S ,5S diastereoisomers. (6Z )-2,5-epoxynon-6-enoic acid (2) was studied instead of 1 to reduce the number of conformers to be optimized and so computational cost (Figure 3). 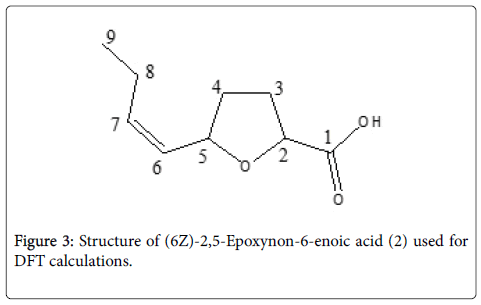 All DFT calculations were performed using the Gaussian 09 program [14] using tight convergence criteria and an ultrafine grid. ωB97XD/6-31+G(d,p)/SMD(chloroform) DFT level [15-17] was used to compute geometries. All stationary points were confirmed as true minima by vibrational frequency calculations. For (2R ,5S ,6Z )-2,5- epoxynon-6-enoic acid (2a), 16 conformers were optimized with relative free energies lower than 3.0 kcal/mol. For (2S ,5S ,6Z )-2,5- epoxynon-6-enoic acid (2b), only 10 conformers were found in the same energy range. In the most stable conformers of 2a and 2b (Figure 4), interatomic distance values between H-2 and H-5 were close (respectively 3.4 and 3.8 Å). Hence, experimental NOESY correlations might not be confidently used to carry out relative stereochemistry of C-2 and C-5. Therefore DP4+ probability [13] was used to assign relative stereochemistry of 1. The DP4 probability [12] is one of the most sophisticated and popular approaches for the stereochemical assignment of organic molecules using Gauge-Independent Atomic Orbital (GIAO) NMR chemical shift calculations when only one set of experimental data is available. DP4+ probability is an evolution of DP4. 1H and 13C chemical shifts were computed at the GIAO/ mPW1PW91/6-31+G(d,p)/PCM(chloroform) level on previously optimized geometries of 2a and 2b [18]. Then calculated chemical shifts were averaged according to the Boltzmann populations of the conformers at 298 K. The obtained sets of 1H and 13C chemical shifts for 2a and 2b were compared to the experimental data of 1 via DP4+ probability. A 100% probability DP4+ value in favor of 2b was concordant with the anti (2S*,5S*) relative stereochemistry of the new compound (2S*,5S*,6Z)-2,5-epoxydocosan-6-en-21-ynoic acid (1). 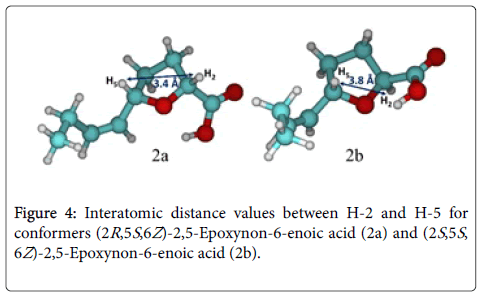 Although furan fatty acids (F-acids) are well known in plants, fish lipids [19], and even from a sponge [20], our compound is unusual because it presents the novelty of an unoxidized tetrahydrofuran with an acetylene at the end of the chain. The role of such tetrahyfuran compound in nature is interesting not only from the chemistry and biochemistry point of view, but also for biosynthetic questions.

This project was supported by the Regional Council of Reunion Island and the ANR 2011-EBIM-006-01 (ERA-NET Netbiome project POMARE). The authors also express their gratitude to Prof. M. E. Remanevy for assistance in sponge collection and to the “Centre de Calcul de l’Université de La Réunion (CCUR)” for computer time.

Copyright: © 2018 Campos PE, et al. This is an open-access article distributed under the terms of the Creative Commons Attribution License, which permits unrestricted use, distribution, and reproduction in any medium, provided the original author and source are credited.