A Dihydroisocoumarin from the Rhizome of Aloe pulcherrima

Chromatographic separation of the chloroform/methanol (1:1) extract of the Aloe pulcherrima rhizome afforded a new dihydroisocoumarin derivative (1) along with six anthraquinone derivatives (2-7). The chemical structures of the compounds were established based on spectroscopic analyses including NMR (1H and 13C NMR, 1H-1H COSY, HMQC, HMBC, NOESY), MS and comparison with reported literature. The isolated compounds were evaluated for in vitro antibacterial and antiplasmodial activities. Almost all compounds showed antibacterial activity with the highest activity observed for compound 5 against Enterococcus faecalis. Whereas, only compound, 3, 4, 5 and 6 showed antiplasmodial activity against chloroquine-resistant (W2) strain of Plasmodium falciparum.

The genus Aloe (family Asphodelaceae, subfamily Alooideae) comprises of more than 400 species, ranging from diminutive shrubs to large tree-like mainly distributed in Africa and Madagascar with only a few species found in the Arabian Peninsula [1-3]. Aloe in Ethiopia is represented by 46 species, including 16 endemic species [4,5].

Aloe pulcherrima is one of the endemic species growing in Ethiopia. The name “pulcherrima ” derived from “pulcher ”, refers to the beauty of the plant with bright red flowers and blue-like green leaves [5]. It has been traditionally used for the treatments of various ailments, particularly for wound healing, constipation and as insect repellents [6,7]. The phytochemical analysis of the leaf latex [7] and the roots of A. pulcherrima have resulted in the isolation of anthraquinones and pre-anthraquinones which have been reported to have antibacterial [7,8], antifungal [7] and antiplasmodial [8]. As part of our on-going program in search for new bioactive natural compounds from African traditional medicinal plants [8,9], now we report the isolation of one new compound (1) and five known compounds (2-7) along with their antibacterial and antiplasmodial activities from the rhizome of A. pulcherrima .

The rhizome of A. pulcherrima was collected from Guddo, Seka District, Jimma zone, Oromia regional state, Ethiopia in September 2016. The plant material was identified and the voucher specimen (voucher number AP001/2015) has been deposited in Jimma University Herbarium.

The air-dried rhizome (320 g) of A. pulcherrima was milled into powder and then extracted using CH2Cl2/MeOH (1:1) four times for 24 h at room temperature. The extract was concentrated under vacuum using rotary evaporator to yield a dark brown residue (23 g, 7.2%). A 20 g portion of the extract was subjected to column chromatography on silica gel (300 g) eluting with petroleum ether containing increasing amount of ethyl acetate to afford 24 major fractions ca. 250 mL each. Fractions 2-10 (5% EtOAc in petroleum ether) were combined and purified by Sephadex LH-20 (eluting with CH2Cl2/MeOH; 1:1) to give chrysophanol (2, 3.8 mg) and aloesaponarin II (3, 4.2 mg). Fractions 11-17 (10% ethyl acetate in petroleum ether) showed mixtures of four compounds, which were combined and subjected to column chromatography (column size: 80 cm length and 4 cm diameter) on silica gel (250 g; eluent: increasing gradient of ethyl acetate in petroleum ether) followed by Sephadex LH-20 (eluting with CH2Cl2/MeOH; 1:1) yielding compound 1 (2.7 mg), aloesaponarin I (4, 3.1 mg), laccaic acid D-methyl ester (5, 3.6 mg) and aloesaponol I (6, 2.9 mg); while fractions 18-22 (20% EtOAc in petroleum ether) showed colourless blue fluorescing precipitate that was washed with 100% petroleum ether and further purified on Sephadex LH-20 (eluting with CH2Cl2/MeOH; 1:1) to give aloesaponol II (7, 4.3 mg).

Four bacterial strains such as, Staphylococcus aureus (ATCC 25923), Enterococcus faecalis (ATCC 29212), Escherichia coli (ATCC 25922) and Pseudomonas aeruginosa (ATCC 27853) were used for in vitro evaluation of the antibacterial activity. An agar disk diffusion method was used to evaluate the antibacterial activity of the isolated compounds on nutrient agar. Briefly, the bacteria cultures were maintained on the nutrient agar slants which were stored at 40°C. The test solutions were prepared by dissolving 50 mg of the test samples to achieve final stock concentrations of 50 mg/ml in DMSO. Freshly grown liquid culture of the test pathogens solution of having similar turbidity with 0.5 McFarland were seeded over the Müeller-Hinton Agar medium with sterile swab. Sterile Whatman filter paper discs were soaked with 30 μL of the stock solution concentration of the samples and air dried to evaporate the solvent and then applied over the seeded plates at equidistance. The plates were then inverted and incubated at 37°C for 24 h. After the incubation period, the plates were observed for a clearance zone around the disks and the clear zones formed around each disk were measured in millimeter. Each experiment was carried out in triplicates.

Two strains of Plasmodium falciparum, the Indochina W2 (chloroquine-resistant), was maintained in continuous culture to attain replication robustness prior to assays. Drug susceptibility was tested by the malaria SYBR Green I-based in vitro assay method [8]. The reference drug, chloroquine was tested along with the isolated compounds. A minimum of three separate determinations were carried out for each sample. Differential counts of relative fluorescence units (RFUs) were used in calculating IC50 values using Prism 4.0 windows software. 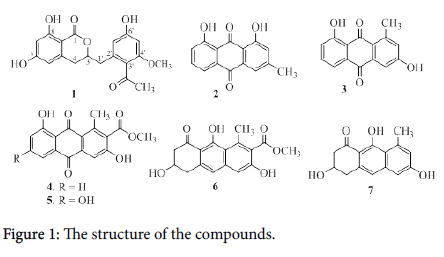 Figure 1: The structure of the compounds.

Compound 1 was isolated as a colorless amorphous solid. Its HRESIMS data showed a peak for a sodium adduct ion [M+Na]+ at m/z 381.0951, corresponding to a molecular formula of C19H18O7, which is consistent with eleven degrees of unsaturation. The UV-VIS absorption (λmax 264, 294 nm), IR (νmax 3212, 1631, 1589 cm-1) and NMR spectra (Table 1) revealed the presence of hydroxyl and conjugated carbonyl moieties of the isocoumarin skeleton [13,14]. 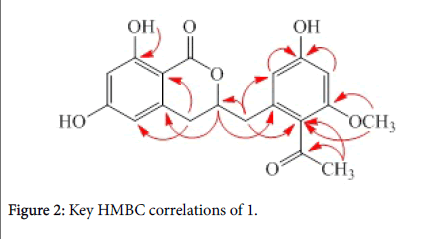 The isolation of anthraquinones and pre-anthraquinones, which appear to have been formed by two parallel routes differing by the way the octaketide chain was folded [16] from this plant are the common denominators of Alooideae [17] indicating chemical affinity of this plant to the related Aloe species and have limited chemotaxonomic importance at intrageneric level. However, it should be emphasized that dihydroisocoumarins are very rare from the genus Aloe and this is one of a few report of the occurrence of such compound from Aloe following the report from A. ferox [13], A. hildebrandtii [14], A. vera [15] and A. hijazensis [18,19]. It is worthwhile then to note that these compounds could serve as a taxonomic marker and therefore, the indepth investigation of these compounds within the related Aloe species cannot be over emphasized so as to resolve the taxonomic instability among the species within the genus Aloe .

The isolated compounds were evaluated for their antibacterial activity against four bacterial strains including Staphylococcus aureus, Enterococcus faecalis, Escherichia coli and Pseudomonas aeruginosa. Disk diffusion method was employed to evaluate the antibacterial activities of the compounds and diameters of inhibition zones are reported in Table 2. The compounds showed antibacterial activity with variable degrees of potency. Compound 4 showed good activity against Gram-negative bacteria (E. coli and P. aeruginosa ) while it has less inhibitory activity against Gram positive bacteria (S. aureus and E. faecalis ). On the other hand, compound 5 exhibited highest zone of growth inhibition (26 mm) on Gram-positive bacteria, E. faecalis , which is almost comparable to that of reference drug, gentamycin (27 mm). This is may be related to the polar/none polar nature of the compounds, as the two compounds differ from one another by presence of free phenolic group in compound 5. It is therefore believed that compound 4 with no free phenolic group is less polar and can pass the outer lipid membrane of the Gram-negative bacteria. Whereas, gram positive bacterias which have no such preventive barrier were expected to be most susceptible to the more polar compound 5.

Table 2: In vitro antibacterial (Diameter of Zone of Growth Inhibition (mm)) activities of the compounds.

Chloroquine-resistant (W2) strain of Plasmodium falciparum was used for antiplasmodial activity test with chloroquine (IC50=0.01 μg/mL) as positive controls, as described in previous reports. Compounds 3, 4, 5 and 6 showed antimalarial activity with IC50 values of 5.00, 0.92, 12.84 and 8.00 μg/mL respectively whereas the rest of the compounds showed little or no inhibitory activity.

A new dihydroisocoumarin was isolated along with six other known compounds from the rhizome of A. pulcherrima. Some of the compounds showed antibacterial activity with the highest activity observed for compound 5, whose activity is comparable to the reference drug (gentamycin) against E. faecalis, supports the traditional uses of the plant. This could give insight about the potentials of these compounds as lead structure in development of antibacterial drugs.

This work was supported by the International Foundation for Sciences, Stockholm, Sweden, through a grant to Negera Abdissa (IFS, Grant No: F/5778-1).

The authors declare that there is no conflict of interest.

Copyright: © 2018 Abdissa N, et al. This is an open-access article distributed under the terms of the Creative Commons Attribution License, which permits unrestricted use, distribution, and reproduction in any medium, provided the original author and source are credited.