A simple synthetic route to a quinazolinone isolated from marine species bacillus cereous is reported. The synthesis involves a few steps starting from readily available anthranilic acid and 2-ethyl hexanoic acid. The product is characterized by 1HNMR, 13CNMR, and Mass.

Natural Products such as terpenoids, alkaloids etc., properties play a significant role in the discovery and development of new drugs. Quinazolines and quinazolinones are proven to be considerably bioactive and shown to possess antitumor, anti-inflammatory, antidiabetic, etc. Quinazolinone moiety is present in many commercialized drugs such as Albaconazole 1, Gifitinib 2 (Figure 1) etc. [1,2]. Besides several quinazoline derived clinical candidates are in various stages of development [2,3]. 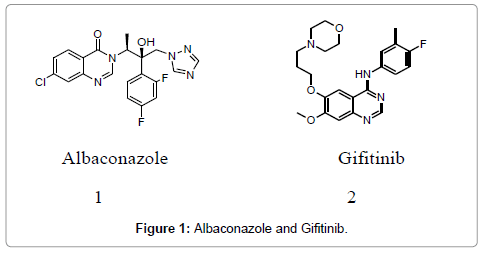 The quinazolinone based natural product 4 (Figure 2) was isolated by Zihong Zhu, et al. in 2011 from marine species Bacillus cereous [1]. They also have confirmed the structure by the synthesis of the same from 2-aminobenzamide. The present communication is to report a simple formal synthesis of the quinazolinone from readily available anthranilic acid and 2-ethylhexanoic acid.

The marine natural product dihydroquinazolinone 4 was isolated from marine species Bacillus cereous and synthesized from 2-aminobenzamide [1]. Herein we report a short formal synthesis of quinazolinone 3 from readily available anthranilic acid and 2-ethylhexanoic acid as shown in the following scheme (Figure 3). 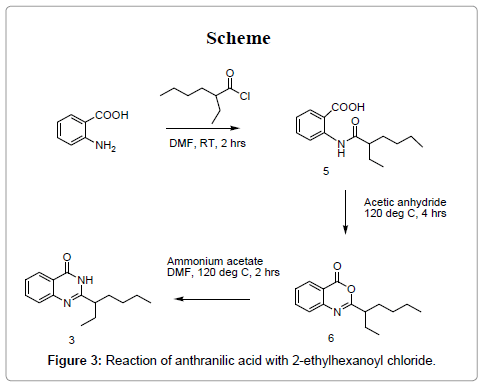 Since the synthesis of 4 from 3 is already reported, we report here the convenient synthesis of 3 only. The synthesis starts with reaction of anthranilic acid with 2-ethylhexanoyl chloride (obtained by reaction of 2-ethylhexanoic acid with thionyl chloride under reflux) in dimethylformamide (DMF) solvent at room temperature under stirring for 2 hrs followed by usual workup to provide the compound 5 as shown in the following scheme. The compound 5 is then heated in acetic anhydride at 120°C for four hours followed evaporation to provide the compound 6, which without purification treated with ammonium acetate in dimethyl formamide (DMF) at 120°C for two hours followed by usual workup furnished the quinazolinone 3 which is purified by silica gel chromatography using dichloromethane and methanol as eluent. The pure quinazolinone 3 is obtained as a white solid which was characterized by 1HNMR (Table 1), 13CNMR (Table 2), DEPT135 and Mass. The 1HNMR was recorded in CDCl3 as solvent by 400 MHz. The aromatic protons with expected multiplicity appeared between 7 and 9 ppm, NH at 11 ppm, two methyl groups as triplets at 1 ppm, and remaining protons between 1.3 and 2.2 ppm. The 13CNMR showed 15 peaks while DEPT showed 11 peaks corresponding to CH, CH2 and CH3. The mass spectrum showed M+1 at 245. Also a strong peak at 246. By using this information, it is confirmed beyond any doubt that the product 3 indeed is the desired quinazolinone which can be converted into 4 using the reported procedure [4-10].

In a clean and dry round bottom flask, anthranilic acid (1 g, 0.0073 moles) was taken in DMF (10 ml). To the contents of the flask 1.2 eq of 2-ethylhexanoyl chloride (obtained from 2-ethylhexanoic acid and thionyl s chloride) was added and stirred vigorously for 2 h at room temperature. The reaction mixture was poured into water and extracted with DCM (2×15 ml), separated the DCM layer, dried over anhydrous Sodium sulfate and concentrated. The crude product was used as such in the next reaction (Figure 5). 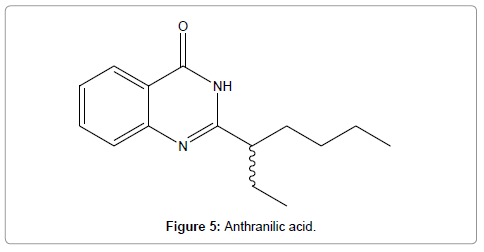 To the crude product obtained from the above reaction acetic anhydride (4 ml) was added and stirred under reflux for 4 hrs, followed by distilling off the acetic anhydride. To the product obtained after distillation dimethyl formamide (10 ml) was added and 2 eq of ammonium acetate and heated under stirring at 120°C for 2 hrs. The reaction mixture was poured into water, extracted with dichloromethane (3×15 ml). The DCM layers were collected, washed with water, dried over anhydrous Sodium sulfate, concentrated and subjected to purification by column chromatography on silica gel using a mixture of dichloromethane and methanol as eluent to obtain pure quinazolinone 3 (400 mg) in about 30% overall yield. The compound was characterized by 1HNMR, 13CNMR, DEPT135 and M/S [11,12].

We summarize that in the present communication, a simple and formal synthetically viable route to the quinazolinone 3 is reported which in turn can easily be converted to 4 using the reported procedure.

Copyright: © 2014 GVR Sharma, et al. This is an open-access article distributed under the terms of the Creative Commons Attribution License, which permits unrestricted use, distribution, and reproduction in any medium, provided the original author and source are credited. 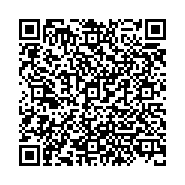