Chemical investigation of the leaves of Amphilophium paniculatum (L.) Kunth. led to the isolation of a novel eudesmane cinnamic acid ester derivative (1). The structure of compound 1 was elucidated by spectroscopic analysis including ESI-MS as well as 1D and 2 D-NMR and was characterized as 3α – (2′,6′- dimethyl-3′,4′,5′- trihydroxycinnamoyloxy)-4β ,6β-dihydroxyeudesm-7en. The antimicrobial activity of the total extract and n-butanol fraction was evaluated

Bignoniaceae is a family of flowering plants which comprises about 800 species in 120 genera; some species are cultivated as ornamentals, distributed in tropical and subtropical regions of South America, Africa and India [1-3]. Nearly all members of this family have woody stems. The genus Amphilophium [4,5] has woody liana, 2-3 foliolate leaves and smooth fruits, flat somewhat woody. Several bioactivities have been reported for Bignonoiaceae species, such as anti-inflammatory activity for Kigelia africana fruits [6]. Also antioxidant activity has been reported for Tecoma stans fruits [7]. Chemically, Bignoniaceae species are characterized by the presence of flavonoids [8], terpenoids [9] and quinines [10]. Nothing has been reported on Amphilophium paniculatum (L.) Kunth. Recently, our chemical and biological investigations of the leaves of Amphilophium paniculatum grown in Egypt led to isolation of seven flavonoids [11]. This work aims to continuing chemical and biological investigations of the leaves of Amphilophium paniculatum.

Microorganisms used in the present study were from the culture collection of Chemistry of Microbial and Natural Products Department at the National Research Centre (NRC), Dokki, Cairo, Egypt. The bacterial strains used were the gram positive bacteria, Staphylococcus aureus and Bacillus subtilis, the gram negative bacteria, Klebsiella species, Alcaligenes faecalis and Escherichia coli. The fungi used were Aspergillus niger, Saccharomyces cerevisiae and Candida albicans. All bacteria were cultured in nutrient agar medium at 37°C for 24 h prior to use while the fungi was cultured on potato dextrose agar at 37°C for 24 h then suspended in potato dextrose broth prior to use.

The air dried powder of Amphilophium paniculatum leaves (1 kg) was extracted by 70% ethanol. The ethanolic extract was evaporated under reduced pressure to give 150 g extract which was suspended in water (1000 ml) and then extracted successively with petroleum ether, chloroform, ethyl acetate and n- butanol. The successive extracts were, separately, evaporated under reduced pressure to yield 20 g, 25 g, 30 g, 20 g, respectively. The n-butanol fraction (20 g) was subjected to column chromatography on polyamide 6S. The column was eluted with distilled water, followed by water/ethanol step-gradient. Finally, the column was eluted with absolute ethanol to ensure complete elution. The separated fractions resulted from the column were examined by PC using solvent systems (BAW and 15% AcOH) and visualization under UV light. Similar fractions eluted by 60% ethanol were combined to give a major fraction which was further purified on Sephadex LH-20 column using EtOH/H2O (6/4) to give compound (1).

Chromatographic separation of the n-butanol fraction from the aqueous ethanolic extract led to the isolation of a new compound 1 (Figure 1) which was obtained as brownish yellow powder. The molecular formula was deduced to be C26H36O7 from the molecular ion peak in ESI-MS analysis at m/z 460.79. This was supported by 13C-NMR spectrum as 26 carbon resonances were observed. The 1H-NMR spectrum suggested a eudesmane sesquiterpene linked to cinnamate moiety. In the zone of eudesmane moiety, four methyl signals were observed at δ 0.68, 0.68, 0.69, 0.97. Morever, two signals at δ 4.3 and δ 3.5 corresponding to H-3, H-6 respectively. The downfield shift of H-3 comparing to H-6 suggested that the acyl group of cinnamate moiety was attached to C-3. For the cinnamate moiety, the spectrum showed downfield signals at δ 6.1 and 7.8 assigned to H-2′ and H-3′respectively. The spectrum showed also an olifenic proton at δ 5.6 for H-8. The spectrum also revealed the absence of aromatic signals suggested that the benzene ring of cinnamate moiety is substituted. 1H- 1H COSY showed correlation between H-5 at δ 1.9 and H-6 at δ4.3. In addition, the experiment showed also a correlation between H-8′ at δ 6.1 and H-7′ at δ 7.8 for the double bond of cinnamate moiety. The presence of isopropyl group was evidenced by the presence of correlation between the two methyl signals at δ 0.68 and the methine signal at δ 1.25. The 13C-NMR spectrum showed 11 carbon resonances corresponding to the cinnamate moiety and 15 carbon resonances due to the sesquiterpene moiety (Table 1). The presence of carbon signal at δ 168.1 was attributed to the carbonyl group of the cinnamate moiety. Also, the double bond of cinnamate moiety appeared as two signals at δ 125, 118 corresponding to C-7′ and C-8′ respectively. Morever, the spectrum showed also 6 aromatic carbon signals at the range δ 125 – 143. The benzene ring of cinnamate moiety was substituted with three hydroxyl groups at C-3′, C-4′, C-5′ and two methyl groups at C-2′, C-6′. The chemical shifts of protonated carbons were assigned by HMQC spectrum. The DEPT experiment showed 6 methyl groups; 7 methine carbons and 3 carbon signals for 3 methylenes. The HMBC experiment of compound 1 showed correlation between the carbonyl carbon and H-3 β (J3) suggested that the cinnamate moiety is attached to C-3. Also, a correlation between H-8 and C-11 (J3) suggested the presence of a double bond at C-7 that appeared at δ 134 and C-8 at δ 122 [12]. Morever, HMBC showed a correlation of both H-10′and H-11′ with C-2′, C-6′ (J2), also it showed a correlation between H- 7′ and both C- 2′,C- 6′ indicating the location of the two methyls on the benzene ring. The relative stereochemistry of compound 1 was suggested by comparison of coupling constant values with those of the reference compounds [13]. This compound was characterized as 3α – (2′,6′- dimethyl-3′,4′,5′-trihydroxycinnamoyloxy)-4β ,6β-dihydroxyeudesm- 7en. 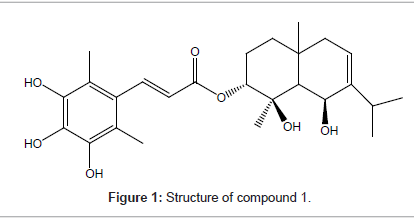 The antimicrobial assay was performed by the agar disc diffusion method [14]. In brief, microbial suspension of bacterium or fungus was swabbed and spread on nutrient agar or potato dextrose agar, respectively and adjusted to McFarland No. 0.5 standard turbidity. The Sample (10 μL) was applied on paper disc (6 mm in diameter) and placed on the inoculated agar. Thiophenicol (20 μg/disc) was used as positive control standard to determine the sensitivity of gram negative and gram positive bacteria. The inoculated plates were incubated at 37°C for 24 h. The antimicrobial activity was evaluated by measuring the diameter of the zone of inhibition against the test microorganisms.

The total extract and n-butanol fraction were tested for their antimicrobial activities against the gram positive bacteria, Staphylococcus aureus and Bacillus subtilis, the gram negative bacteria, Klebsiella species, Alcaligenes faecalis and Escherichia coli. The fungi used were Aspergillus niger, Saccharomyces cerevisiae and Candida albicans by paper disc diffusion method [15]. The discs were mounted with samples at concentrations 1000, 500, 250 and 100 μg/disc, respectively and applied on previously inoculated agar plates. The lowest concentration of the sample that visibly inhibited growth after overnight incubation was considered to be the MIC. The MICs were read in μg/disc.

The MIC was performed by the agar disc diffusion method. The results obtained by measuring the zone of inhibition diameter (mm) around the disc. The total extract revealed strong antibacterial activity against gram positive bacteria Staphylococcus aureus,, Bacillus subtilis, gram negative bacteria Escherichia coli (MIC 100-250 μg/disc), while exhibited no fungicidal activity against all tested yeast and fungi (Table 2). The n-butanol exhibited a weak antimicrobial activity against E. coli and C. albicans with MIC 100 and 500 μg/disc respectively.

Copyright: © 2013 Nassar MI, et al. This is an open-access article distributed under the terms of the Creative Commons Attribution License, which permits unrestricted use, distribution, and reproduction in any medium, provided the original author and source are credited. 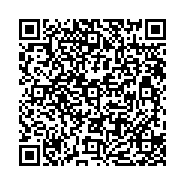