Turmeric (Curcuma longa L. Family: Zingiberaceae) is a widely cultivated spice in India and other Asian countries. Curcumin is the main coloring substance in Curcuma longa and two related compounds, demethoxycurcumin and bisdemethoxycurcumin are altogether known as curcuminoids. Turmeric is rich in curcuminoids, and recognized for their broad spectrum of biological activities. During isolation and purification of curcuminoids from oleo resin, the volatile oil present turmeric solubilizes curcumin creating problem in recrystallization process. To eliminate the interference of volatile oil and resolve the problem recrystallization, the present research work was undertaken. Various organic solvents and their combinations were tried for selective recrystallization of curcuminoids. Mixture of hot isopropyl alcohol: hexane (1:1.5) was found to be the best recrystallization solvent for purification of curcuminoids. The identity of curcuminoids was further confirmed by thin layer chromatography (TLC) and Fourier Transform Infra-Red spectroscopy (FTIR). The total curcumin content of crude curcuminoid powder was found to be 76.82% W/W whereas in recrystallized powder the purity was increased to 99.45% W/W.

Curcumin is a liposoluble compound and can be easily dissolved into organic solvent such as methanol, ethanol, and acetone. However, poor water solubility often limits its biomedical uses using aqueous systems. This observation prompted us to examine turmeric extracts as a delivery system for curcumin and to examine the possibility of turmeric extract itself as candidate agent for pharmacologic evaluation. In this preliminary study, we used different solvents to extract the crude turmeric material and compared the curcumin concentrations in these extracts [1].

The choice of solvents for extraction is restricted to the few solvents of defined purity allowed by national and international food laws in the processing of food materials. Hexane, acetone, alcohol (ethanol, methanol), isopropanol and ethyl acetate are used in the extraction of oleoresins of spices. From consideration of solubility of active constituents, the curcuminoids are poorly soluble in the hydrocarbon solvents. Alcohol and acetone are good extractants and the yields can also be expected to be high because of extraction of non-flavor components. Soxhlet extraction of turmeric powder with acetone gave a yield of about 4.1% containing in 3 hours. Acetone as solvent was slightly superior to alcohol and ethyl acetate, the curcuminoids content also is on the high side, suggesting selective extraction. The results of extraction with acetone have, however been reported to give high yields of curcuminoids than alcoholic and remaining extraction [2].

Collection and processing of plant material

Turmeric rhizomes were collected from Maharashtra region, India. The plant specimen was authenticated by Dr. Rajendra D. Shinde, Associate Professor, Department of Botany, St. Xavier’s College, Mumbai-400 001 as Curcuma longa L . (Family: Zingiberaceae). The plant specimen matches with the Blatter Herbarium specimen no. B.R-469 of B. Rukmini Bai. The collected rhizomes were boiled in water for about 30 minutes and then dried under sunlight. The dried rhizomes were size reduced and shifted through mesh of fine size.

Turmeric rhizome powder was extracted with ethyl acetate in a soxhlet assembly until all the colouring matter is extracted. The obtained crude extract was concentrated to semisolid brown coloured mass.

One gram of crude extract was added to 25 mL of Hexane and kept aside for 12 h. After 12 h, the solution with lump of crude extract was stirred using magnetic stirrer at 600 rpm for 3 h. During the stirring at one point the lump was broken into small fragment and finally reduced to powder. The suspended lump powder was separated by centrifugation and dried in oven at 40°C. The obtained crude powder was evaluated for total curcumin content using reported UVspectroscopic method [3]. The melting point of the curcuminoid powder was determined using open capillary method [4].

The curcumin content was determined in the crude extract using following procedure:

Construction of calibration curve for curcumin: Standard curve was obtained using the standard solution in the range of 1 μg/ml to 5 μg/ml. Absorbances of these solutions were taken at 425 nm using UVspectrophotometry (Make: UV spectrophotometric analysis was performed on double beam UV-Visible spectro-photometer Shimadzu, model 1700) having two matched quartz cells with 1 cm path length.

Isolation of pure curcuminoids from crude powder: In chemistry, recrystallization is a procedure for purifying compounds. By dissolving both impurities and a compound in an appropriate solvent, either the desired compound or impurities can be removed from the solution, leaving the other behind. It is named for the crystals often formed when the compound precipitates out [5].

The pure curcumin was isolated from crude curcumin by recrystallisation process. Different organic solvents and combinations thereof were tried for recrystallisation. The melting point of the recrystallized powder was determined by capillary method. The identity of the purified curcumin was further confirmed by Thin layer chromatography and FTIR spectroscopy.

Confirmation of identity by TLC: TLC of the recrystallized curcumin was performed on pre-coated silica gel G plates (Stationary Phase) using mixture of n-hexane and ethyl acetate in the ratio 7:3 as solvent system (Mobile Phase) [3]. Curcumin was used as standard. Detection was done by spraying the plate with vanillin-sulphuric acid reagent. The retention factor (RF) values for the separated spots were calculated and compared with RF value of pure curcumin and values reported in the literature.

Confirmation of identity by FTIR: The isolated and purified curcuminoids were mixed with infrared (IR) grade potassium bromide (KBr) in the ratio of 1:100. Pellet of the mixture was prepared by applying 6 metric ton pressure with a hydraulic press. The pellet was scanned in an inert atmosphere over a wave number range of 4000-500 cm-1 using FTIR instrument (Shimadzu IR Infinity-1, Japan).

Calibration curve of standard curcumin (Figure 1) was obtained by plotting the values of different concentration of curcumin versus their absorbances for quantitative determination of content of curcuminoids. The slope, intercept, correlation coefficient (R2) and regression equation was obtained. The representative linear equation obtained was y=0.1507x-0.0137, where x is concentration and y is the absorbance. The correlation coefficient value obtained was 0.9974 which indicated good linearity in the range of 1 μg/ml to 5 μg/ml. 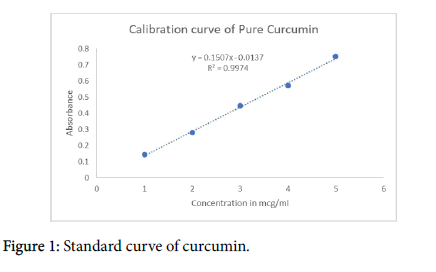 Curcuminoids vary in chemical structures, physico-chemical characteristics as well as the functional properties. Curcumin exhibits poor solubility in water. As a liposoluble compound, curcumin can be extracted from turmeric rhizomes with organic solvents. Acetone as solvent was slightly superior to alcohol and ethyl acetate, the curcuminoids content also is on the high side, suggesting selective extraction. During isolation and purification of curcumin from oleo resin, the volatile oil present turmeric solubilizes curcumin creating problem in recrystallization process.

The total curcumin content of crude curcuminoid powder was found to be 76.82% W/W whereas in recrystallized powder the purity was increased to 99.45% W/W.

Curcuminoids complex, found in the rhizome of turmeric (2.5-6%) comprises curcumin (curcumin-I), demethoxycurcumin [4-hydroxycinna [pmoyl-(4-hydroxy-3-methoxycinnamoyl) methane] (curcumin- II) and bisdemethoxycurcumin [bis-ane] (curcumin-III) [6]. These three curcuminods were well seperated by TLC. The Rf values obtained for the isolated Curcuminoids were matching with standard curcumin. This confirmed the identity of purified curcuminoids. The photograph of TLC plate is depicted in Figure 2. 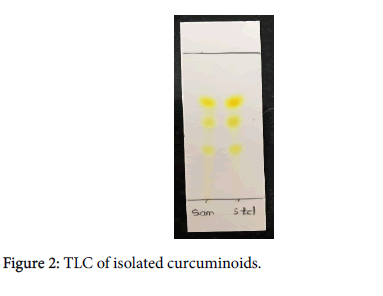 FTIR spectrum of isolated curcuminoid (Figure 3) showed a characteristic stretching band of O-H at 3512 cm-1. The peak at 2922 cm-1 represents C-H Stretching and 1602 cm-1 peak was assigned to C=C symmetric aromatic ring stretching. The peak at 1510 cm-1 represents C=O, while enol C-O peak was obtained at 1280 cm-1 and benzoate trans-C-H vibration was at 962 cm-1. The FTIR spectrum of the isolated curcuminoid was matching with the FTIR spectrum reported in literature [7]. 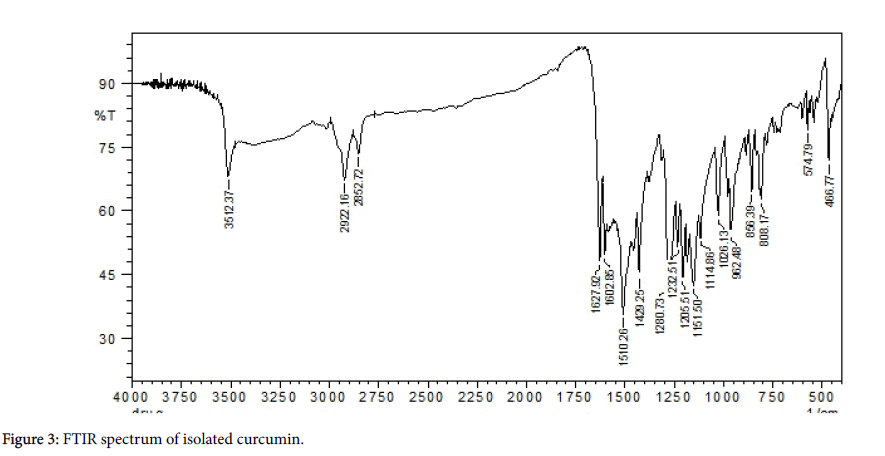 Curcuminoids are nutraceutical compounds used worldwide for medicine as well as in food preparations. The novel method of extraction gives high purity curcumin. There was significant increase in yield. The current method of isolation was simple and economical. After recrystallization, the organic solvents can be recovered and thereby it will reduce the cost of manufacturing.

Authors are very much thankful to the Principal of Hyderabad Sindh National Collegiate Boards (HSNCB's) Dr. L. H. Hiranandani College of Pharmacy, Ulhasnagar for his continuous support, guidance and encouragement.

Copyright: © 2018 Pawar HA, et al. This is an open-access article distributed under the terms of the Creative Commons Attribution License, which permits unrestricted use, distribution, and reproduction in any medium, provided the original author and source are credited. 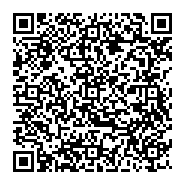