The ethanol extract of Echinaceae angustifolia DC was tested for acute toxicity (LD50) using Swiss Albino Mice and was screened for Brine Shrimp lethality using Artemia salina larvae. The results showed that the plant was toxic to the mice at even a lower concentration (300 mg/Kg) and caused death at a concentration of 500 mg/Kg body weight of the live mice. The LD50 was found to be 3,807.89 mg/Kg. The result of the Brine Shrimp lethality showed that the extract was toxic to the naupli with an LC50 and LC90 values of 125.89 μg/mL and 794.33 μg/mL respectively.

Although Plants are potential sources of modern drugs, yet only about 13% of drugs produced within developed countries are derived from plants and less than 15% of the plants were known to have been investigated pharmacologically as reported in a survey study conducted by Kubmarawa et al. [1].

According to World Health Organization (WHO), drugs from plants are easily available, less expensive, safe, and efficient, largely and/or rarely have side effects and that medicinal plants would be the best source to obtain variety of drugs. Abdul Rani et al. reported that large percentage of peoples from developed countries uses traditional medicines, which has compounds derived from medicinal plants [2].

The chemistry, pharmacology and clinical properties of Echinacea species used medicinally were reported by Barnes et al. [3]. According to the study Echinacea species; Echinacea angustifolia, Echinacea pallida and Echinacea purpurea have a long history of medicinal use for a variety of conditions, particularly infections. The paper revealed that Echinacea products are among the best-selling herbal preparations in several developed countries. Modern interest in Echinacea was focused on its immunomodulatory effects, particularly in the prevention and treatment of upper respiratory tract infections. The chemistry of Echinacea species was well documented, and several groups of constituents, including alkamides and caffeic acid derivatives, were considered important for activity. There were, however, differences in the constituent profile of the three species. Evidence from preclinical studies supported some of the traditional and modern uses for Echinacea, particularly the reputed immunostimulant (or immunomodulatory) properties. Several, but not all, clinical trials of Echinacea preparations have reported effects superior to those of placebo in the prevention and treatment of upper respiratory tract infections. However, evidence of efficacy was not definitive as studies have included different patient groups and tested various different preparations and dosage regimens of Echinacea. On the basis of the available limited safety data, Echinacea appeared to be well tolerated. However, further investigation and surveillance were required to establish the safety profiles of different Echinacea preparations. Safety issues included the possibility of allergic reactions, the use of Echinacea by patients with autoimmune diseases and the potential for Echinacea preparations to interact with conventional medicines [3]. The present study is an effort to further investigate the Chemistry and Pharmacology of Echinaceae angustifolia DC to justify the claim of traditional medicine practitioners in the area of study (Adamawa State – Nigeria).

The fresh samples of the plants were collected in Girei Local Government Area of Adamawa State, Nigeria in November, 2015. The plant was identified by Clifford Emmanuel (tribe’s man/research assistant) and authenticated by Botanists in the Department of Biological sciences Federal University Kashere.

Preparation of plant parts for extraction

The plant samples were air dried and ground into powder with pestle and mortal and weighed. Exactly 60 g of the powder was packed in an improvised thimble of white clean cloth sewed manually. The thimble was then inserted into the Soxhlet apparatus, 500 mL ethanol was transferred down the thimble into the pot. Extraction was maintained at a temperature of 75°C and continued for 6 hours. Then the ethanol extract was collected and the cake recovered from the thimble was kept. The methanolic extract was evaporated on a rotary evaporator (R110) at 40°C, altogether, 200 g of each sample were extracted and labeled F01 (Abdu and Dimas) [4].

Laboratory animals used in the research: The animal models involved in this study were the Swiss albino mice acquired from the National Veterinary Research Institute (NVRI) Vom in Jos, Plateau State – Nigeria. The experimental procedures relating to the animals were authorized by the Ethical committee of National Institute for Pharmaceutical Research and Development (NIPRD), Abuja-Nigeria before starting the study and were conducted under the internationally accepted principles for laboratory animal use and care (EEC Directive of 1986; 86/609/EEC) [5]. The parameters evaluated during this assay included body weight of the mice, survival time, paw licking, salivation, stretching/writhing, erect fur, calmness, reduced movement, weakness, coma, convulsion, sleep and death. Albino mice were coded, weighed and randomized into three groups/dose with 3 mice per group/dose in two phases. In phase I, nine mice were randomized into three groups of three mice each and were given (5 mL) each of 30, 300 and 500 mg/ kg body weight (b. wt) of the extract orally. The mice were observed for paw licking, salivation, stretching of the entire body, weakness, sleep, respiratory distress, coma and death in the first four (4) hours and subsequently daily for seven (7) days. In phase II, another fresh set of nine mice were randomized into three groups of three mice each and were given 1600, 2900 and 5000 mg kg-1 body weight of the extract orally on the result of the first phase. They were observed for signs of toxicity and mortality for the first four critical hours and thereafter, daily for 7 days. The LD50 was then calculated as the square root of the product of the lowest lethal dose and highest non-lethal dose i.e., the geometric mean of the consecutive doses for which 0% and 100% survival rates were recorded in the second phase, the oral median lethal dose were calculated using the formula:

Artemia salina eggs were added into a hatching chamber ¾ filled with ocean sea water. The chamber was kept in an open space for 24 hours, after which the eggs hatched into shrimp larvae. 4 mL ocean water was then added and ten (10) larvae of Artemia salina were introduced into each vial. After 24 hours of introducing larvae, the number of survivals were counted in triplicate and recorded. To each sample vial, a drop of DMSO solvent was added, ten shrimps were transferred using a Pasteur pipette, and artificial seawater was added to make a total volume of 5 mL. The nauplii were counted against a lighted background. Counting for the chronic LC50 began 24 hours after initiation of tests. Nauplii were considered dead if they were lying immobile at the bottom of the vials, and the percentage of deaths at each dose and at the control were determined [6].

A modified method used by Subrata et al. [7] was adopted which employ the use of Microsoft Excel spreadsheet application to formulate the regression equations from the data of mean results of percentage mortality of the brine shrimp versus the log of concentrations. These equations were later used to deduce the LC50 and LC90 values for the extract Figure 1. 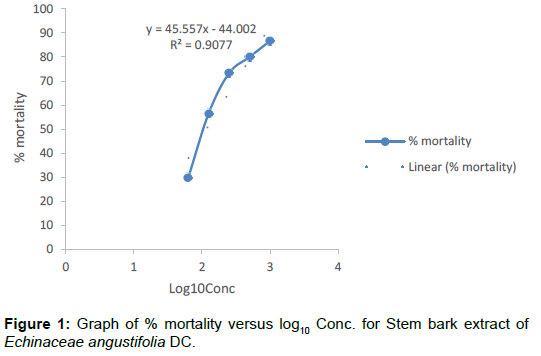 Volume of extract per live weight of mice

The volume of extract per live weight of mice was calculated using the following formula:

The acute oral toxicity of methanol extracts of E. angustifolia DC was determined in the present study. The evaluations of the in vivo acute toxicity as well as determining the LC50 and LC90 values using the brine shrimp lethality test were done [8]. The screening of the toxicity of the plant was crucial to assure the safety and effectiveness of the plant extract. Signs of toxicity such as pain, distress, allergic reactions, physical changes in the tested animals can be detected in the in vivo assays but not effects on vital functions like the cardiovascular, central nervous, and respiratory systems. In this study of acute oral toxicity, 36 Swiss albino mice were employed to observe the toxicity effects of ethanol crude extract of E. angustifolia leaves. From the result, mortalities were reported as well as adverse toxicity signs were observed on the tested mice right from the lower dose. The physical appearance such as, fur, raised tails, salivation, paw licking were observed which indicated that the crude extract did affect the animals. Hence, E. angustifolia DC has caused acute toxicity effects with an LD50 value of 3,807.89 mg/Kg which suggest the possibility of the use of the extract as a potential source for the development of pharmacological agent to treat various types of ailment.

The Brine shrimp bioassay was used to determine the potential toxicity of E. angustifolia ethanol extract to become lethal to A. salina nauplii due to its toxic expression. According to Abdul Rani et al. [2], extracts derived from natural products which have LC50 ≤ 1000 μg/ mL are known to be toxic. Microsoft Excel spreadsheet application to formulate the regression equations from the data of mean results of percentage mortality of the brine shrimp versus the log of concentrations. These equations were used to deduce the LC50 and LC90 values for the extract. In this study, the plotted graphs show that the LC50 and LC90 values of the crude extract were 125.89 μg/mL and 794.33 μg/mL respectively [9].

The result of this study was agreement with a similar study conducted on Echinacea specie (E. purpurea) extracts which showed a significant immunomodulatory activities. Among the many pharmacological properties reported, macrophage activation has been demonstrated most convincingly. Phagocytotic indices and macrophage-derived cytokine concentrations have been shown to be Echinacea-responsive in a variety of assays. Activation of polymorphonuclear leukocytes and natural killer cells has also been reasonably demonstrated. Changes in the numbers and activities of T- and B-cell leukocytes have been reported, but are less certain. Despite this cellular evidence of immunostimulation, pathways leading to enhanced resistance to infectious disease have not been described adequately. Several dozen human experiments – including a number of blind randomized trials – have reported health benefits. The most robust data come from trials testing E. purpurea extracts in the treatment for acute upper respiratory infection. Although suggestive of modest benefit, these trials are limited both in size and in methodological quality. Hence, while there is a great deal of moderately good-quality scientific data regarding E. purpurea, effectiveness in treating illness or in enhancing human health has not yet been proven beyond a reasonable doubt [10].

In a separate study, it was reported that Echinacea purpurea extracts protected noncancerous cells from apoptosis. The study was aimed at determining interference with doxorubicin chemotherapy, and if fractions and compounds from Echinacea angustifolia roots protected the cells. Cervical and breast cancer cells were treated with the Echinacea samples and doxorubicin. At 0.05 and 0.5 μM doxorubicin concentration, cynarine increased HeLa cell growth by 48-125% and 29-101%, respectively (p<0.01). At 0.05 μM doxorubicin concentration, chicoric acid increased cell growth by 23-100% (p<0.01). When MCF-7 cells were treated with Echinacea and doxorubicin, the ethyl acetate fraction increased cell growth by 20-25%, and cichoric acid increased cell growth by 10-15%. Cynarine showed proliferative activity on HeLa cells, but showed antiproliferative activity on MCF-7 cells. Results indicated that phenolic compounds are responsible for proliferative activity. Studies with individual compounds showed that cichoric acid and cynarine interfered with cells treated with 0.5 μM doxorubicin. The results of the study showed that Echinacea herbal medicines affected cell proliferation despite cancer treatment, and that herbal medicines required further study with respect to anticancer drugs [11].

Thus, the results proved that the ethanol extract of E. angustifolia DC was toxic and can be further explored in research such as antimalarial properties for which the plant is traditionally known for in Adamawa State, Nigeria and in the research for the development of natural product-based pharmaceutical products.

Further studies are in progress involving the isolation of compounds from E. angustifolia DC stem bark extracts and testing the compounds to be isolated on Plasmodium falciparum and Plasmodium bergei.

Copyright: © 2016 Zakari A, et al. This is an open-access article distributed under the terms of the Creative Commons Attribution License, which permits unrestricted use, distribution, and reproduction in any medium, provided the original author and source are credited. 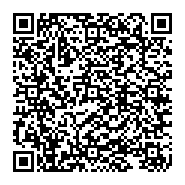