Antibacterial and Antioxidant Phenylpropanoid Derivative from the Leaves of Plantago lanceolate

Plantago lanceolata (Plantaginaceae) is a perennial cosmopolitan species traditionally used for blood clotting and healing of wound. The powdered leaves were successively extracted with n-hexane, ethyl acetate and methanol to give 1.55, 2.16, and 8.2%, yield, respectively. Silica gel column chromatography afforded one phenylpropanoid derivative named verbascoside. The structure of the compound was determined using spectroscopic methods (UVVis, IR, NMR). The extracts, and verbascoside were evaluated invitro for antibacterial activities by using the disc diffusion method against Staphylococcus aureus, Escherichia coli, Klebsiella pneumania and Proteus miabilis. The promising inhibition zone (20 mm) was observed by verbascoside against S. aureus compared to standard Ciprofloxacin (23 mm). The radical scavenging activity of the methanol and ethyl acetate extract, and verbascoside compounds were 64.2%, 79.2 and 83.9, respectively suggesting that verbascoside displayed powerful radical scavenging activity indicating the potential of the plant as herbal remedies.

Natural products and their related moieties have historically been incredible as a source of therapeutic agents. The past century, however, has seen an increasing role played by microorganisms and marine organisms in the production of drugs for the treatment of serious diseases. Natural products will continue to play a crucial role in meeting this demand through the expanded investigation of the world’s biodiversity, much of which remains unexplored [1]. Traditional remedies for wound healing also have a wide usage among the people living in the rural parts of Ethiopia. Several medicinal plants have been reported to be used for the treatment of wounds and ulcers [2]. Among these plants, Plantago species were reported to be used as wound healing agent with its severe, haemostatic and antimicrobial properties.

Plantago lanceolata (ribwort plantain) belonging to the genus Plantago and family Plantaginaceae is a perennial cosmopolitan species which shows high ecological plasticity, being found naturally in grassy areas on roadsides, in pastures and in crops as weeds. P. lanceolata is locally termed as “gurteb” in Amharic and “kortobe” in Afan Oromo (Ethiopia). Those Plantago is a genus of about 265 species of small, inconspicuous plants commonly called plantains. Previous studies have shown that Plantago species have analgesic, antiinflammatory, antimicrobial, antioxidant, hepatoprtective activities, and cytotoxic effect on the cancer cells [3]. Despite the traditional use of this plant against various diseases, to the best of our knowledge there is limited report on the chemical constituents, antibacterial and antioxidant studies of the leaves extract of this plant. Hence, the current study was undertaken primarily to isolates, characterizes compounds from the leaves of P. lanceolata plant and examine for antibacterial and antioxidant studies of the leaves extract and compounds.

Fresh leaves of P. lanceolata were collected in November 2016 from Mugher town, Adea Berga Woreda, west shoa zone, Oromia, Ethiopia. The plant was authenticated by a botanist Shambel Alemu at the Biology Department of Addis Ababa University and specimen stored (Voucher no: F001/2016) in the National Herbarium of Ethiopia, Addis Ababa University, Addis Ababa, Ethiopia. The leaves were washed with water without squeezing to remove trash and dust particles and then air-dried at room temperature (26°C) for one week. The air-dried leaves were chopped into small pieces and finally grounded using a mortar and weighed.

The EtOAc and methanol extracts of the leaves and verbascoside (1) were evaluated invitro for antibacterial activity by using the disc diffusion method against one gram positive bacterium Staphylococcus aureus (S. aureus) and three gram negative bacterium Escherichia coli , Klebsiella pneumania and Proteus miabilis . The bacterial cultures were inoculated into the Muller Hinton Agar (MHA). Cipro loxacin was used as positive control. Approximately, 20 mL of sterile MHA were poured into sterile culture plates and allowed to set wells of about 6 mm in diameter which were punched on the plates. Standard solutions of 1.5 mg/mL concentration of the extracts and isolated compounds were prepared and 10 μL solutions from the concentration were loaded to the discs in different replications. The plates were incubated at 37°C. The antibacterial activity of the plant extracts were evaluated by measuring the zone of inhibition against the test organism a ter 24 hrs [4].

DPPH assay: The free radical scavenging activity of the EtOAc, MeOH extract and isolated compounds were measured by 1,1- diphenyl-2-picryl-hydrazyl (DPPH) method [5]. With this method it is possible to determine the antiradical power of an antioxidant by measuring the decrease in the absorbance of DPPH at 517 nm. As a result of the color changing from purple to yellow the absorbance is decreased when the DPPH radical is scavenged by an antioxidant through donation of hydrogen to form a stable DPPH-H molecule [6]. Lower absorbance of the reaction mixture indicated higher free radical scavenging activity [7].

The EtOAc extract was dissolved in four vials containing methanol to give 500, 250, 125 and 62 μg/mL. To each 1 mL of the above EtOAc extracts was added each 4 mL of 0.04% DPPH which gave 100, 50, 25 and 12 μg/mL. The resulting solution was placed in an oven at 37°C for 30 minutes and subjected to UV-Vis spectrophotometer to record absorbance at 517 nm. This was repeated for the methanol extracts and isolated compounds. The absorbance of 0.04% DPPH in MeOH solution was found to be 1.06. The percentage DPPH inhibition was calculated according to the following formula [8].

The 1H NMR spectrum of compound 1 (Table 1) exhibited six aromatic protons (δH 7.20-6.58 region) with two sets of ABX multiplicity pattern, two trans-olefinic protons (J=15.99 Hz), and a benzylic methylene at δH 2.77 (2H, t, J=7.39 Hz) suggesting the presence of a caffeic acid unit and 3’, 4’- dihydroxyphenethyl alcohol moiety. In addition, two anomeric proton signals at δH 4.46 (d, J=7.9 Hz) and 5.31 (d, J=1.6 Hz) were attributed to β-glucose and α- rhamnose units, respectively, suggesting the presence of disaccharide moiety. The acyl group was positioned at the C-4” position of the glucose unit, on the basis of the deshielding of the H-4” signal (δH 4.95 t, J=9.4 Hz) of the glucose unit. The methyl group of acetyl attached to the rhamnose was observed at δH 1.98 whereas methyl of the ethyl moiety attached to the glucose were observed at δH 1.20. 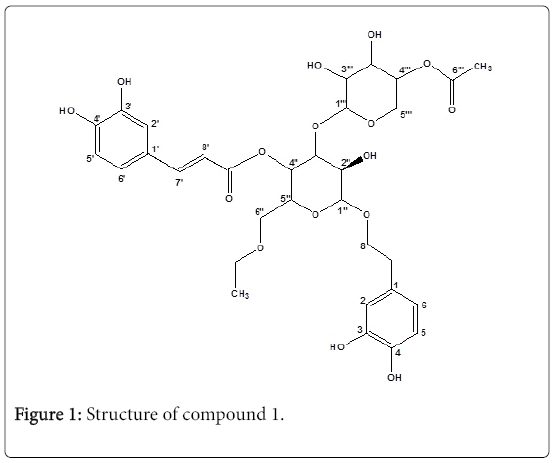 The antibacterial tests showed considerable antibacterial activity against the bacterial species used in the study. verbascoside (1) showed promising activity against the tested strains except for K. pneumoia . The methanol extract was found to inhibit S. aureus and P. miabilis compared with EtOAc extract. On the other hand, the EtOAc extract displayed better activity than the MeOH extract against E. coli and K. pneumonia . verbascoside (1) showed promising inhibition diameter (20 mm) against S. aureus as compared to standard drug (23 mm) (Table 2).

The ethyl acetate, methanol extracts and verbascoside (1) were examined for its radical scavenging activities. The DPPH radical scavenging activity was found to be 64.2%, 79.2, 87.7 and 83.9, respectively, at 100 μg/mL (Table 3). The IC50 values of the EtOAc, MeOH, and verbascoside (1) were 36.6, -59.1 and 76.1, respectively. The result obtained was found to be promising as compared to ascorbic acid which is used as positive control with percent inhibition of radical by 97% at 100 μg/mL. The promising activity of verbascoside (1) may be attributed to the presence of phenolic hydroxyl groups. The result suggests that the leaves of P. lanceolata can be used as a natural antioxidant.

Table 3: % scavenging activity of the extracts and isolated compounds of P. lanceolate.

For decades traditional medicines have been used and continue to be an alternative approach on treatment for various diseases. Currently, the growing interest of consumers in substances of natural origin in association with the increasing concern surrounding potentially harmful infections disease has directed to a rising interest in the use of plant extracts as functional ingredients in many pharmaceutical products. Silica gel column chromatography of the methanol extract furnished a phenylpropanoid derivative, verbascoside (1) which showed promising antibacterial activity against S. aureus and antioxidant activity. The findings support the traditional use of the plant to treat various infectious diseases.

The authors declare that there is no conflict of interests regarding the publication of this paper.

Firew Derebew is thankful to Applied Chemistry Program, Adama Science and Technology University for offering PG opportunity. We are also indebted to Department of Chemistry, Addis Ababa University for access to spectroscopic instruments.

Copyright: Â© 2018 Deribew F, et al. This is an open-access article distributed under the terms of the Creative Commons Attribution License, which permits unrestricted use, distribution, and reproduction in any medium, provided the original author and source are credited 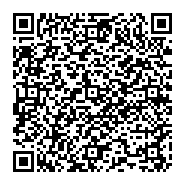