WHO estimates that an average of 190 million people are hospitalized each year worldwide and 9 million of them contract an infection at that time [1-6]. In Algeria, according to a national prevalence survey on nosocomial infections, led by the ministry of Health, population and hospital reform; at the hospital mustapha bacha of Algier, 8% of hospitalized patients contract a nosocomial infection [7]. Bacteria are the most common pathogens responsible for nosocomial infections [7] and major pathogens implicated are Gram-negative bacilli: 60% Cocci Gram positive 30% (Staphylococcus aureus) 15% [8-10]. According to a study done in 2004 on Algerian monitoring the resistance of nosocomial germs; of a total of 14400 bacterial strains isolated from hospitalized patients, 3246 are multi-resistant bacteria (22.5%), MRSA are responsible for 38.6% of nosocomial infections contracted [11]. In the present study, we are in search for medicinal plants with active antimicrobial effect on nosocomial bacteria represented by strains of the genus Staphylococcus. Plants studied were chosen from those used by thelocal population against infectious Diseases, supposed to have an antibacterial effect. The choice will be made after ethnobotanical survey conducted among the population of south-western Algeria on the basis of a questionnaire drawn up for the research of plants with an antibacterial effect (Table 1 and Figure 1).

Rate of resistance to families of antibiotics tested 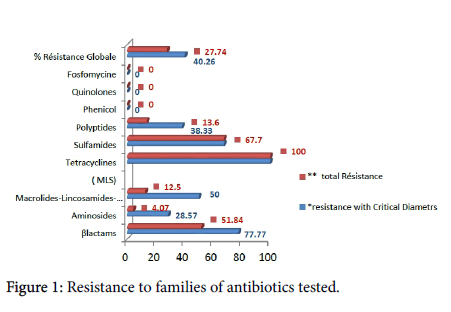 • Strains tested were collected from surfaces and air of five hospitals located in south west of Algeria in totally 100 strains.

• Sampling of air: collect of air.

• Antibiotic resistance: We tested a range of antibiotics belonging to different antibiotics families.

• Plant Extracts tested: We conducted a total of 40 extracts of five plants selected from locale practitioners typically use the aerial part of the plant without flowers and leaves separated; The number of solvents used was eight divided into two aqueous solvents: Distilled water and the hydrochloric acid, and six organic solvents: methylene chloride, chloroform, methyl alcohol, ethyl alcohol, petroleum ether and acetone.

We put in a 250 ml flask 15 g of plant material to which is added 100 ml of solvent, the mixture is refluxed for 2 h at a constant temperature.

The extract is filtered and the filtrate is totally dried white rotavapor.

The quantities used to impregnate the discs are drawn from the dried extract.

For the study of activity, résistance and limits of inhibition zone we used different quantities/Disc which are: 2 mg, 4 mg.

Plants were identified at the LPSO (Phytochemistry and Organic Synthesis Laboratory University of Bechar).

*Technical Antibiogram: Concerning the technique of antibiogram, we used the method of agar diffusion standardized by the National Committee for Clinical Laboratory Standards (NCCLS) [11-14] which is an agar diffusion techniques which consists of seeding by tight grooves with a swab from a pure bacterial solution adjusted to 0.5 McFarland. and incubated at 35 °C for 18 h.

To interpret the results, we have taken for comparison four parameters that are:

• Rate of activity of Plants extracts: Represented by the number of positive tests (presence of inhibition zones).

• Rate of resistance of Staphylococcus strains.

We perform a comparison between the antibacterial effect of the plants studied with the effects of all solvents confounded for each plant (Figure 2). 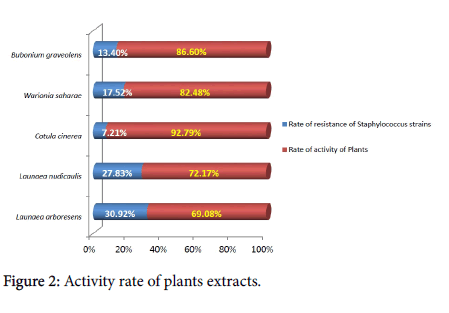 All of the plants tested shown an antibacterial effect against nosocomial strains of genus staphylococcus tested but with variable rate of activity. 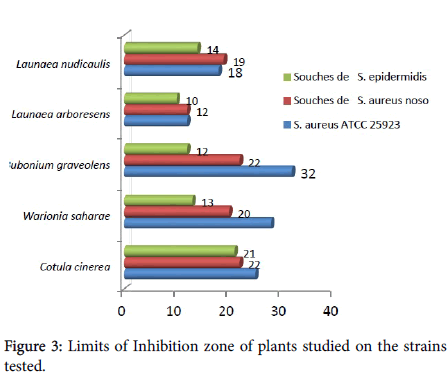 Figure 3: Limits of Inhibition zone of plants studied on the strains tested. 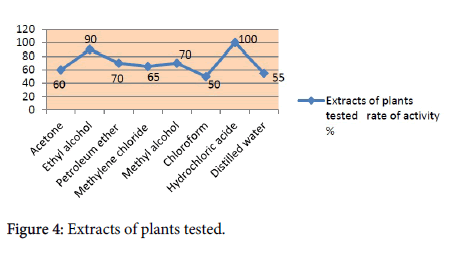 Concerning the reference strain maximum zones of inhibition were significantly greater for most of the plants tested (Figure 5). 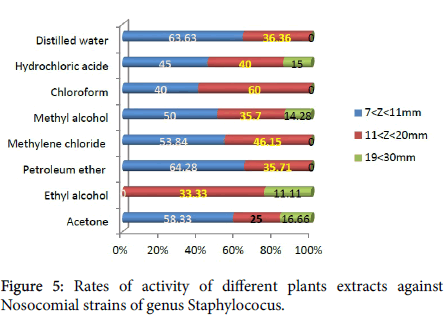 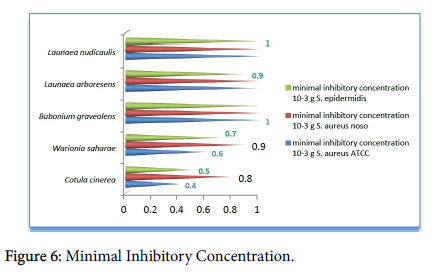 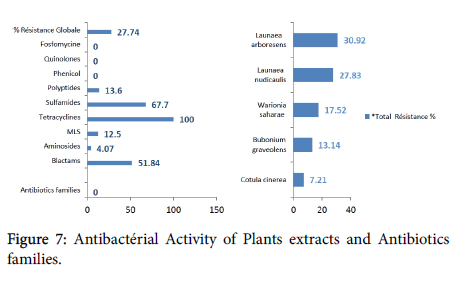 Staphylococcus strains tested were Resistant to tetracyclines, Sulfamides and β lactams with successive rates of 100%, 67.70% and 51.84% whereas their rates of resistance for plants tested were included between 30.92% concerning Launaea arboreseens and only a rate of 07.21% for Cotula cinerea .

Strains of both species of genus Staphylococcus tested were resistant to 40.26% considering critical diameters and 27.74% was totally resistant with negative inhibition zone. Whereas the reference strain showed no resistance to antibiotics tested.

All of the plants tested shown an antibacterial effect against nosocomial strains of genus staphylococcus tested but with variable rate of activity. Cotula cinerea has shown against the nosocomial strains the highest activity rate of 92.79%.

The maximum inhibition zones were shown by Cotula cinerea with areas of 22 mm to 21 mm for S. aureus and Staphylococcus epidermidis .

Extracts shown variables rates of activity against strains tested and the highest rate was shown by extracts of hydrochloric acid with 100% with a maximum inhibition zone of 22 mm.

Staphylococcus strains tested were Resistant to tetracyclines, Sulfamides and β lactams with successive rates of 100%, 67.70% and 51.84% whereas their rates of resistance for plants tested were included between 30.92% concerning Launaea arboreseens and only a rate of 07.21% for Cotula cinerea .

Cotula cinerea has shown the highest antibacterial activity against strains of staphylococcus tested.

Copyright: © 2018 Berbaoui H, et al. This is an open-access article distributed under the terms of the Creative Commons Attribution License, which permits unrestricted use, distribution, and reproduction in any medium, provided the original author and source are credited. 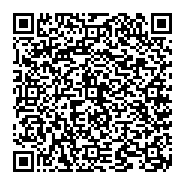