Seven drimane-type sesquiterpenes: polygodial, drimenol, drimendiol, drimenin, isodrimininol, isodrimenin and proximadiol (cryptomeridiol); three lignans: sesamin, cubebin and its epimer eudesmin, and one sterol: (β-sitosterol) were isolated from Drimys winteri (Winteraceae) from Chiloe Island, Chile. Eudesmin and its phytosterols were isolated from the plant for the first time, and sesamin was found to be the major product in the plant’s bark by a significant margin. Furthermore, qualitative and quantitative differences were detected between some products. Structures were established using 1D and 2D NMR (COSY, HSQC, and HMBC) spectra, HRESIMS and comparison with published data. Some isolated compounds were tested against the phytopathogenic fungi Botritys cinerea, Dothiorella sp., Penicillium sp. and Cladosporium cladosporoides; additionally, a study was carried out to determine the contact toxic action of leaf and stem bark extracts upon phloematic insect pests from the Pseudococcus viburni (Signoret) (Hemiptera: Pseudococcidae) mealy bug complex.

Drimys winteri J. R and G. Forster var. chilensis (DC.) A. Gray is a tree native to Central and Southern Chile, which grows in continental Chile from Coquimbo to Aysén, including Chiloé Island. It is abundant in wet swampy localities from sea level to an altitude of 1700 m [1]. In continental Chile, Winteraceous plants are represented by two species of Drimys: D. winteri J. R. Forster and G. Forster and D. andina Reiche [2]. D. winteri is a tree whereas D. andina is a shrub [3]. Marticorena and Quezada also distinguish the chilensis (DC.) A. Gray variety of D. winteri [4]. Drimys winteri is a sacred plant to the Mapuche indigenous people, who uses its aerial parts for the treatment of dermatitis, stomach pain, toothache, tumors, and other illnesses [5]. Extracts of the stem bark have long been used to treat human and bovine diseases [6]. In the past, the stem bark of D. winteri was exported to Europe as an antiscorbutic medicine [1,5]. The tree is also used for commercial purposes, in wood production, crafts, manufacturing and the pulp industry due to the high quality of its fibers. Its architectural characteristics and natural resistance to insects and microorganisms are advantageous for playgrounds in parks and gardens in a wide range of weather conditions. The wood of this species is highly valued and used to manufacture furniture and musical instruments as well as to protect crops [7]. Furthermore, extracts of aerial parts of D. winteri have industrial applications in products such as cosmetics, phytonutrients and pest repellent agents [7-9]. Previous reports on the chemical composition of continental D. winteri revealed the presence of tannins, flavonoids and essential oils containing sesquiterpene lactones [5]. The drimane-type sesquiterpenoids possess a wide variety of biological activities, including antimicrobial, pungency, antibacterial, antifungal, antifeedant, cytotoxic, molluscicidal, piscicidal, growth regulation and phytotoxic properties [9]. The pungency of several drimanes and their irritant properties on the skin (allergies) has also attracted attention [6-10]. To the best of our knowledge, as of the present, fourteen drimanetype sesquiterpenoids have been isolated from continental D. winteri and probably also from D. andina [5,6], as well as one aromadendrane derivative [11] and one drimane-type sesquiterpene trimer [12]. The sesquiterpenes reported from the bark and leaves collected in Brazil [13] were not considered because D. winteri is not present in Brazil [3]. The main characteristics and properties of this tree have been attributed to the presence of certain sesquiterpenoids. The reactivity of the unsaturated dialdehyde functionality towards biological nucleophiles is considered responsible for the antifeedant activity of those compounds (polygodial and epipolygodial) [14,15]. The chemical composition of the essential oils obtained by hydrodistillation of the stem bark and leaves of continental Chile (Santiago) D. winteri was also studied using GC and GC/MS for which results have been published [16]. The essential oils from the stem bark and leaves of D. winteri from Chiloé Island and continental Chile (Santiago) were studied revealing certain differences in their chemical composition. Sesquiterpene hydrocarbons constituted the main chemical groups in the stem bark oils (in which α-santalene, trans -β- bergamotene curcumenes are the major components), whereas monoterpenes (in which (α) - pinene, β-pinene, and linalool are the main components) constituted the main chemical groups in the leaves of Island plants. Sesquiterpenes (germacrene) and phenylpropanoids are most abundant in the leaves of continental plants [16]. The aim of the present study was to compare the chemical profile of insular D. winteri from Chiloé Island (growing and flourishing in climate conditions of high humidity, abundant water and very scarce volcanic soil) that differ greatly from those where the continental population is found. We also separately investigated the components present in the bark and leaves and evaluated their insecticidal and antifungal properties for potential industrial use. The investigation also showed an unusual concentration of the sesamin lignan in bark from Chiloe canelo populations in comparison with continental populations, which would partially explain its extensive use by the local population as a treatment for certain conditions [17]; and the absence of bacteria and insect attacks on the species [18]. Until now, neither the existence of the lignan eudesmin nor its phytosterol content had been reported. This study also evaluates its possible use as a dietary supplement.

Leaves were dried at room temperature for 3 weeks. Stem bark was dried in a forced-air oven at 40ºC for 48 h.

1. Dried and powdered D. winteri stem bark (700 g) was extracted using n-hexane (3 x 2.0 L) at room temperature for 72 hours. After filtration, the residue was placed in a Soxhlet apparatus and extracted again using n-hexane for 24 hours. The solutions were combined and evaporated under reduced pressure (210 mbar) at 25-30°C to produce a yellowish oily residue (35.0 g). The crude extract was first subjected to flash CC (silica gel, 230-400 mesh, 650 g) and fractionated by gradient elution (100% n-hexane to 100% EtOAc), and individual fractions were then further purified by two CC on silica gel. Elution with n-hexaneethyl acetate (98:2-90:10) yielded 2.84 g of a yellow mixture consisting of four compounds. Further separation using the Chromatotron yielded 1.050 g of polygodial 1; 0.015 g of drimenol 2; 0.052 g of drimenin 4 and 0.010g of proximadiol. The fractions eluted with n-hexane - EtOAc (4:2) provided a mixture of 0.52 g of drimendiol 3, 0.15 g of Isodrimenin

Polygodial (Figure 1) (Scheme a): [α] D and spectroscopic data (NMR, MS) were identical to data previously reported on this compound [6]. 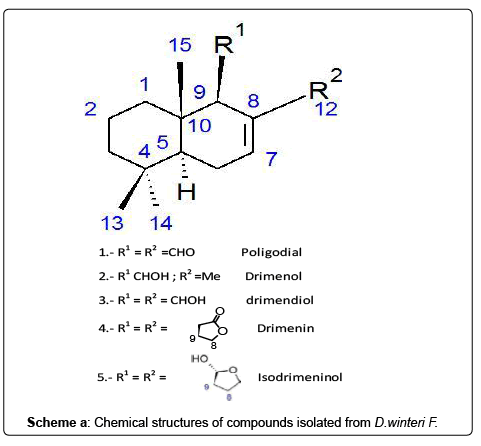 Scheme a: Chemical structures of compounds isolated from D.winteri F. 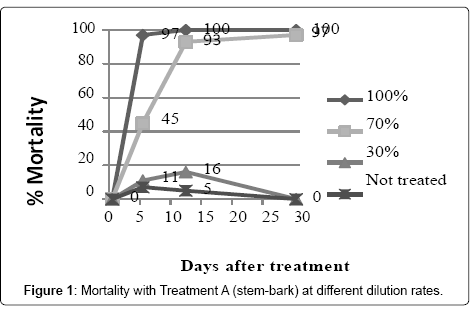 Figure 1: Mortality with Treatment A (stem-bark) at different dilution rates.

Scheme b: Chemical structure of Isodrimenin. 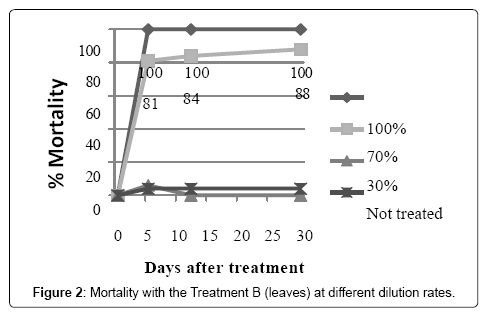 Figure 2: Mortality with the Treatment B (leaves) at different dilution rates.

Drimendiol (Figure 3) (Scheme a): The 1HNMR and 13CNMR spectral data on this compound correlated well with that reported elsewhere [6]. 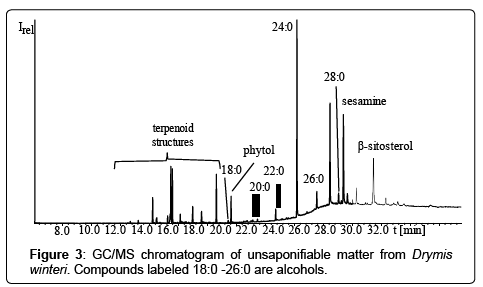 Drimenin: The MS, 1HNMR and 13CNMR spectral data on this compound correlated well with reported data [20,21].

Antifungal activity against Botrytis cinerea Pers., Dothiorella sp., Penicillium sp. and Cladosporium cladosporoides was determined in triplicate experiments by microdilution [30-32] and the results are presented as the minimum inhibitory concentration (MIC). The spores were cultured on Saboureaud medium at 25ºC for 7 days. The compounds were assessed in the 600-18.75 μg/ml dilution interval, and standard antifungal compounds were assessed in the of 250-3.9 μg/ml range. Spores were obtained from well-grown and sporulating fungal cultures maintained in potato-glucose agar medium by suspension in sterile distilled water, filtration on glass wool and centrifugation. The spores were counted in a Neubauer chamber and diluted with sterile distilled water to a final concentration of 104-105 spores/ml. The assay was carried out in 96-well microtiter plates. 100 μl of the spore suspension was incubated with 100 μl of the compound sample suspended in Saboureaud medium. The final volume of the mixture was 200 μl. A spore germination control and a Saboureaud medium control were included in all of the experiments as well as the standard fungicides iprodione [3-(3, 5-dichlorophenyl)-N-isopropil-2, 4-dioxoimidazolidine-1-carboxamide] (Rukon, Aventis Crop Science, France) and myclobutanil [R-butyl-R-(4-chlorophenyl)-1H-1, 2, 4-triazol-1-propanonitrile] (Systhane, Dow AgroSciences, Chile). The MIC is defined as the lowest concentration of the compound without visible spore germination after the incubation time (7 days). The major compounds were evaluated and a mixture of compounds was evaluated to examine the synergic effect.

A preliminary trial was conducted to determine the contact toxic action of leaf and stem bark Drymis winteri extracts on phloematic insect pests from the mealy bug complex (Hemiptera: Pseudococcidae). These primary pests are small, soft-bodied plant feeding insects, from 2 to 5 mm in length, able to be laboratory-reared on potato tube sprouts. Small target colonies of about 25 immature forms were selected from each potato tuber to be sprayed with the selected treatments after their establishment on the host plant. Mother insect colonies of 25 individuals each were kept on separate potatoes at a laboratory temperature ranging from 15 to 28ºC under fairly dark conditions to avoid migration. On day 20, spray treatments were applied using an electric dispenser and evaluated for mortality at 5, 12 and 20 days thereafter. At the time of spraying, mealy bugs had been developed from last (third) nymphal stage to young adult females. The solutions extracted from stem bark and leaves were individually diluted in 3 ml of distilled water and microsprayed in droplets of about 50-60 microns in diameter on the colonies settled on each tuber. Treatments included the following concentrations:

Three ml of each of the 6 dilutions in distilled water were used to spray each replication. In addition, untreated control colonies were only sprayed with 3 ml of distilled water. Treatments included 6 replicates, as follows:

Mortality counts were assessed at days 5, 12 and 20 after spraying treatments. To determine full mortality, specimens were punctured slightly under a binocular microscope (Figure 1 and 2).

Table 3: Antifungal activity of some compounds isolated from Drimys winteri. Data reported as MIC in μg/mL. 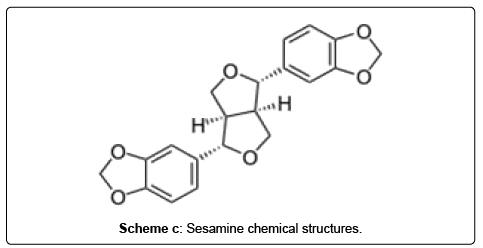 Seven drimane-type sesquiterpenes, namely polygodial, drimenol, drimendiol, drimenin, isodrimininol, isodrimenin and proximadiol; the lignans sesamin, (the majority compound), cubebin, their epimers and eudesmin, and β-sitosterol were isolated from Drimys winteri (Winteraceae) collected from Chiloe Island, Chile. This is the first time that eudesmin has been isolated from this plant. Sesamin, β-sitosterol was the major products; and qualitative and quantitative differences were detected between products from Chiloe Island and Continental Drimys species. Some isolated compounds were tested against phytopathogenic fungi and assays were also carried out to determine the contact toxic action of leaf and stem bark extracts on phloematic pest insects.

The authors are indebted to Prof. Dr. Philippe Christen (Geneva University) for the acquisition of the NMR spectra.

Copyright: © 2015 Muñoz O, et al. This is an open-access article distributed under the terms of the Creative Commons Attribution License, which permits unrestricted use, distribution, and reproduction in any medium, provided the original author and source are credited. 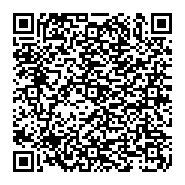