Bupleurum species represent one of the most successful and widely used herbal drugs for treatment of many diseases over the past 2000 years. Bupleurum chinense (B. chinense) is officially listed in China and Bupleurum kaoi (B. kaoi) is the only indigenous Bupleurum plant in Taiwan. Therefore, the aim of our study is to investigate the chemical components, anti-inflammatory, and antioxidants of B. kaoi and B. chinense. We report highly sensitive and specific assay for anti-inflammatory with a TNF-α luciferase plasmid vector. In preliminary experiments, we found that B. kaoi have stronger anti-inflammatory effects than B. chinense. However, it was no significant difference in the free radical scavenging activities of B. kaoi and B. chinense. We also demonstrated that saikosaponins (SS) a, SSc and SSd are the major compounds of B. kaoi and B. chinense in thin layer chromatography (TLC) analysis. The SSa, SSc and SSd content in B. kaoi has been reported to be higher than that in B. chinense. We combined TLC chromatograms with hierarchical clustering analysis(HCA)to classify into B. chinense and B. kaoi. The major impact feature were Rf 0.58(SSd) and Rf 0.44(SSc) .Theses studies showed that TLC chromatograms with HCA could be as tool in to differentiation and identify different species of herbal medicine in the future.

In traditional chinense medicine, Bupleuri Radix possesses many biological effects, such as anti-inflammatory, antipyretic, and antihepatitis activity [1,2]. A number of factors affect the saikosaponin content of Bupleuri Radix including: local growing conditions, harvest time, root portion, plant condition, individual plant characteristics, fertilization, and cultivation methods. The major bioactive components of Bupleuri Radix are the saikosaponins (SSs), which belong to the oleanane-type triterpene saponins. Although more than 75 monomer SSs have been isolated from Radix bupleuri, only SSa, SSb2, SSc, and SSd have been pharmacologically examined [3-7]. Different monomer SSs have been reported to exhibit different predominant pharmacological effects. Previous studies showed that the SSa and SSd are reported to have anti-cancer and anti-inflammatory effects. In addition, SSa has been shown to increase corticosterone secretion and decrease blood cholesterol, while SSd has immunoregulatory, anti-bacterial, and liver protection effects [4]. However, herbal medicines come from different species within the same genera or different locations within the same species, the quality and efficacy are somewhat different according to their origins, growing conditions, and so on.

Due to its medicinal importance, the demand for Bupleuri Radix has increased steadily in recent years. However, Bupleurum chinense (B. chinense) is used worldwide for medicinal purposes, but is especially common in China, Japan, and South Korea [8]. B. chinense is one of the standard medicinal plants in chinense Pharmacopoeia 2005. Bupleurum kaoi (B. kaoi) is the species native to Taiwan, which contains more proportion of saikosaponins than other Bupleurum Radix [9]. Therefore, the aim of our study is to investigate the SSs content and biological activity of B. kaoi and B. chinense.

Ten batches of raw material samples of Bupleurum kaoi and Bupleurum chinense were collected from Taiwan and China and listed in Table 1.

Two grams of Bupleuri Radix powder were accurately weighed and extracted with 40 ml Ammonia solution/ Methanol (volume ratio1:19) by refluxing for 1 h. After filtering, the filtrate was transferred into a flask and was then evaporated to dryness. The residue was dissolved with 10 ml methanol.

The macrophage cell line RAW 264.7 was purchased from the Bioresource Collection and Research Center (Hsinchu, Taiwan). The cells were cultured in DMEM (GIBCO BRL Life Technologies) supplemented with 10% fetal bovine serum (FBS), 2 mM L-glutamine, and 100 U/ml penicillin-streptomycin. They were maintained at 37°C in a humidified atmosphere containing 5% CO2. The reporter plasmid contains a Homo sapiens TNF-α promoter fragment (Panomics, Inc.) linked to a luciferase reporter gene. The colony was expanded in 300 ml of LB medium at 37°C overnight. The cells were collected, and the DNA was extracted and purified using the Qiagen Miniprep kit (Qiagen, Chatsworth, CA). The pCDNA3 plasmid containing the Geneticin (G418) resistant gene was prepared similarly. This plasmid was used in co-transfection studies for the preparation of a TNF-α reporter stable cell line.

The macrophage cell line RAW 264.7 (1×105 cells/well) were plated on a 24-well plate and allowed to grow for 24 hours before the transfection. The cells were washed twice with DMEM and incubated for 6 hours in 1 ml of transfection medium containing TNF-α luciferase plasmid (1.5 μg/ml), pCDNA3 plasmid (0.5 μg/ml), and LipofectAMINE (GIBCO Life Technologies) (24 μg/ml). After transfection, the cells were washed with culture medium containing 10% FBS. Twenty-four hours later, the medium was replaced with a selection medium containing 0.5 μg/ml of G418. The medium was changed every 2 days, and the culture was allowed to continue for 2 weeks.

The macrophage RAW 264.7 cells were co-transfected with the TNF-α luciferase plasmid and the pCDNA3 plasmid that provides a selectable marker. Luciferase activity was measured by enzymedependent light production using a luciferase assay kit. In each well of 96-well plate, stably transfected reporter cells (1.6×105 cells/well) were treated with 0.1 ng/ml Lipopolysaccharide (LPS) for 6 h at 37°C, a known stimulator of TNF-α. After each experiment, cells were washed and incubated at room temperature for 10 minutes in 30 μl of lysis buffer (Promega). Mix 20 μl of cell lysate with 100 μl of Luciferase Assay Reagent and measure the light produced. Output is quantitated as relative light units (RLU) per μg protein of the sample.

Cytotoxicity assays were performed by the MTT method. Briefly, cells were incubated with 100 μl of 1 mg/ml MTT for 1 h at 37°C under 5% CO2. DMSO (100 μl) was added to dissolve the crystals and the OD560 was measured with an ELISA reader (Spectrafluor Plus, Tecan, Switzerland). The results were expressed as cell viability percentages among LPS-stimulated cells.

TLC fingerprint data: After inspecting the TLC fingerprint of 10 batches of Bupleurum samples, the spots shown on the TLC plate was transformed to the optical density after Scion Image software treatment. It was used as the data for analysis. 9 spots were chosen for cluster analysis. Cluster analysis: heat map [10,11] was applied to evaluate the overall features of TLC fingerprint among the 10 batches of Bupleurum samples, and heat map-based feature selection was then used to reduce the number of features and to find impact factor of them. The greater of variance in the same group of the heat map cluster result was chosen and repeated this steps until the cluster result was changed. The general idea of this method was to choose the features that can be most distinguished between classes.

All the experiments were repeated at least three times. Data were expressed as means ± SD and analyzed using one-way analysis of variance (ANOVA) followed by a Tukey’s test to determine any significant differences. A value of P<0.05 was considered statistically significant.

TNF-α production in cells treated with SB203580 at 30 µM was reduced to 62.1 ± 0.5 % of that in untreated cells. All the experiments were repeated at least three times. Data were expressed as means ± SD and analysed using one-way analysis of variance (ANOVA) followed by a Tukey’s test to determine any significant differences. A value of P<0.05 was considered statistically significant

To give the most chemical information and best separation in the B. kaoi and B. chinense, the TLC analysis was investigated in this study. The main bioactive components of Bupleuri Radix are minor and triterpenoid saponins, such as saikosaponins a (SSa), SSb2, SSc, and SSd (Figure 1). Figure 2 was showed the TLC conditions were developed and optimized using three SSs standards(SSa ,SSc , and SSd). In our results showed that SSa, and SSd are the major components of B. kaoi and B.chinense (Figure 3). In Figure 3, the TLC profiles indicate the highest difference in saikosaponins roots content was between B. kaoi and B. chinense. B. kaoi has greater SSa and SSd than B. chinense. Bk-03 (B. kaoi) has highest Σ area (SSa+d) in 10 batches of raw material samples. All the percentage of SSa, c and d were estimated from the spot area produced by TLC of each saikosaponin (Table 3). The vertical analysis showed significantly differences in SSa, SSc and SSd content in 10 batches. The SSa , SSc and SSd content in B. kaoi has been reported to be higher than that in B. chinense (2.0 to 7.5-fold).The horizontal species analysis showed that the percentage ratios’ SSa+d/SSa+c+d roots content were 0.84 in B. kaoi and 0.83 in B. chinense. The percentage ratios’ SSc/SSa+c+d roots content were 0.16 in B. kaoi and 0.17 in B. chinense. It was found that B. kaoi roots SSa, SSc, and SSd was higher than B. chinense. Interestingly, the percentage ratios’ SSa+d/SSa+c+d and SSc/SSa+c+d were similar with B. chinense. Similar results were also observed by HPLC analysis (unpublished data). 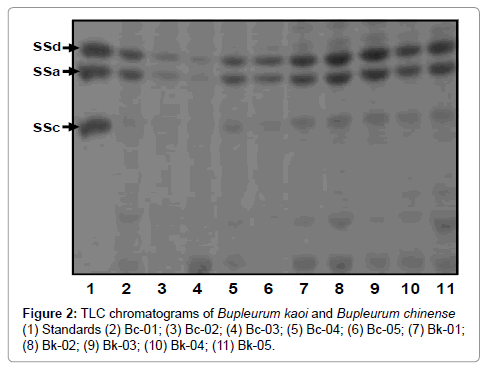 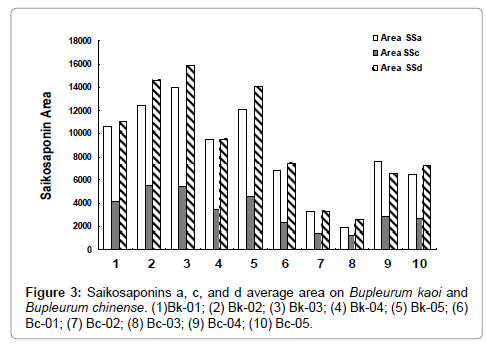 Table 3: Saikosaponins a, c, and d average percentage in roots on Bupleurum kaoi and Bupleurum chinense.

Saikosaponins is found to be the major content of Bupleurum after TLC fingerprint analysis. SSa and d are the major compounds of B. kaoi and B. chinense. In order to assess this resemblance and differences of these samples, a hierarchical agglomerative clustering analysis of B. kaoi and B. chinense samples were performed based on the relative spot areas of TLC. The results of HCA were shown in Figure 4, we found that the samples could be classified into Cluster I (B. chinense) and Cluster II (B. kaoi). It showed that the major impact feature were retention factors (Rf) 0.58(SSd) and 0.44(SSc), and the next were Rf 0.68 and 0.12. 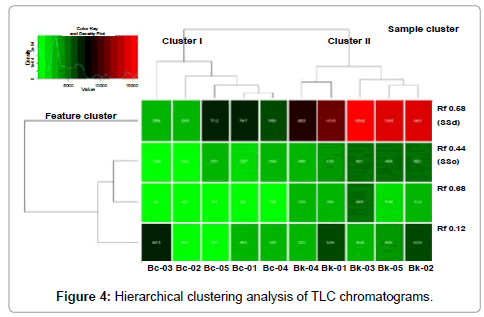 In traditional chinense medicine, Bupleuri Radix possesses many biological effects, such as anti-inflammatory, antipyretic, antihepatitis activity [1,2,12]. Anti-inflammatory action of saikosaponins (SSs) isolated from the root of Bupleurum falcatum L were examined using female albino rats. Among saikosaponins isolated from Bupleurum falcatum, SSa and d, not c, were demonstrated to have anti-inflammatory action [13]. In recently studies demonstrated that the Tumor necrosis factor-alpha (TNF-α) is primarily produced by macrophages, lymphocytes, neutrophils, endothelial cells, keratinocytes, and fibroblasts during acute inflammatory reactions. Therefore, to clarify the anti-inflammatory activity, we establish a highly sensitive and specific assay for TNF-α gene transcription. This assay is based on the use of TNF-α reporter cell line, which was created by stable transfection of a macrophage cell line (RAW264.7) with a TNF-α luciferase plasmid vector. In preliminary experiments, we found that B. kaoi have stronger anti-inflammatory effects than B. chinense. However, it was no significant difference in the free radical scavenging activities of B. kaoi and B. chinense.

We demonstrated that SSa, SSc and d are the major compounds of B. kaoi and B. chinense in TLC analysis. The SSa, SSc and SSd content in B. kaoi has been reported to be higher than that in B. chinense. We combined TLC chromatograms with hierarchical clustering analysis to differentiate the different species of Bupleuri Radix. Theses studies showed that, HCA could be classified into Cluster I (B. chinense) and Cluster II (B. kaoi).The major impact feature were Rf 0.58(SSd) and Rf 0.44(SSc) .This method could be as tool in to differentiation and identify different species of herbal medicine in the future.

The study was financially supported by grants from the Industrial Technology Research Institute. The authors would like to thank Chuang Song Zong chinense herbal medicine pharmacy, Taiwan for providing Bupleurum kaoi.

Copyright: © 2014 Liu SH, et al. This is an open-access article distributed under the terms of the Creative Commons Attribution License, which permits unrestricted use, distribution, and reproduction in any medium, provided the original author and source are credited.