Bioactive Lignans: A Survey Report on their Chemical Structures?

Lignans are polyphenols spread in a wide variety of plant-based foods, including seeds, whole grains, legumes, fruit, and vegetables. When consumed, lignan precursors are converted to the enterolignans, enterodiol and enterolactone, by bacteria that normally colonize the human intestine. Lignans have attracted considerable attention due to their pharmacological and biological activities. This review article is a survey on the molecular structure of about 276 new naturally occurring lignans obtained from different plant families. We classified seven main types according to their structural features, and provided a number of review reports published recently about lignans. A tabular compilation of the molecular structures of known lignans is presented at the end of this survey report. A total of 111 references were considered for this survey report.

For centuries, the structural studies of natural products served as the principle driving force for the discovery of new chemical reactivity. The fact that natural products are an excellent reservoir of biologically active compounds. For long time, extracts from natural products have been a main source of folk medicines, and even today, many cultures still employ them directly for medicinal purposes. Natural product chemistry turned to an interdisciplinary science, where the success of a chemist would only be possible in close collaboration with biologists, pharmacologists, and chemists. Thus many novel biological activities could only have emerged from the natural products arena.

Among the classes of identified natural products, lignans, one of the largest families, have been studied intensively for their diverse structures and variety of biological activities. Lignans are widely distributed in nature, occurring in hundreds of plants all over the world. Many lignane structures have interesting biological, pharmacological, or medicinal activities, including inhibition of carcinogenesis and induction of differentiation in leukemia or teratocarcinoma cells. Lignans are structurally diverse organic compounds, characterized by a basic backbone modified in multiple ways, allowing the formation of more than 7000 naturally occurring lignan varieties, particularly with approximately 50 new lignans identified each year. The amount of research effort performed towards lignans has been striking increased dramatically since 1940. For example, over the periods 1940-1960 and 1960-present, the average number of refereed publications describing research involving lignans as a major component (within abstract, title, and keywords; estimated using Scopus search engine) was 11 and 7016, respectively. It is interesting to note that the publications concerned with lignans observed between 2000 (189 documents) and 2015 (420 documents) coincides with the most recent discoveries on occurrence, extraction, isolation, purification, classification, biosynthesis, biogenesis, and applications of lignans.

Lignans, a vast, abundant and diverse group of secondary metabolites distributed in higher plants generally derivatives of phenyl propanoids created naturally via peroxidases and laccases enzymes. They induce a structural diversity and mainly interesting bioactivities, thus, the new research has been dedicated to the development of effective novel methodologies for biosynthesis of lignans, analogs and hybrids [1-3]. A recent studies presents a variety of synthetic and biosynthetic methods and mechanistic schemes which mimic the most common and various lignans and norlignans organic skeletal (Scheme 1) [4,5]. Another recent work shows phytochemical and pharmacological properties of the isolated, purified anticancer lignans from Anthriscus sylvestris (L.) Hoffm. herbaceous plant [6]. 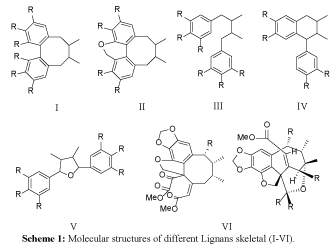 A number of review articles reported between 1980 and 2000 about asymmetric synthesis approaches of lignans and stereo controlled syntheses techniques of unsymmetrically furofuran lignans, and on plant natural lignans, neolignans and their cancer chemoprevention, cardiovascular, antiviral, food and biotechnological applications [95-111].

This work was financially supported by King Khalid University and King Abdulaziz City for Science and Technology (KACST), Saudi Arabia.

Copyright: © 2016 Fazary AE, et al. This is an open-access article distributed under the terms of the Creative Commons Attribution License, which permits unrestricted use, distribution, and reproduction in any medium, provided the original author and source are credited. 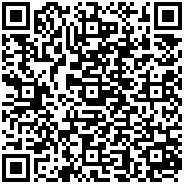