Exposure to solar UV radiation (UVR) is an environmental and health hazard causing several diseases. Several natural products showed various degrees of protection from UVR, but there has been no comparative study to examine their efficacy. Here, a simple assay has been developed to compare the ability of various natural compounds and commercial sunscreens in protecting bacterial cells from UVR. Dietary Apigenin and synthetic Apigenin, Zerumbone, Resveratrol, and Curcumin were used and their efficacy in protecting bacterial cells from UVR was compared. Various concentrations of compounds and sunscreens were plated on petri dishes containing bacteria, the petri dishes were exposed to UVR, bacterial growth was determined, and this growth was compared with that of a bacterial plate without UVR. The results demonstrated that all of the natural compounds protect bacterial cells from UVR-induced cell death even though the levels of protection differ. Additionally, these compounds protect bacterial cell death equally or better than sunscreens. Surprisingly, both synthetic and dietary Apigenin are most effective in protection compared to other compounds and sunscreens even at a 1000-fold lower concentration. These results strongly support that Apigenin has the highest potential for developing natural compound based drugs for protection from UVR-induced diseases.

Exposure to solar UV radiation (UVR) is an environmental and health hazard causing several diseases including photoaging, photocarcinogenesis, neurodegenerative disease, immunosuppression, XP syndrome, erythema, edema, and cataracts of the eye [1-6]. Chronic UV exposure results in skin cancer, the second most prevalent cancer in the U.S [7]. Therefore, it is essential to identify new and better avenues to protect from UVR-induced health hazards.

Zerumbone (ZER; 2,6,9,9-tetramethylcycloundeca-2,6,10-trien-1- one) is a sesquiterpenoid found in the rhizome of Zingiber (Ginger) zerumbet, a plant used in Southeast Asian countries as an anti-inflammatory agent and also as a condiment. Resveratrol (3,5,4’-trihydroxy-trans-stilbene) is a natural phenol present in peanuts, grape, blueberry, raspberry, and mulberries. Curcumin (1E, 6E)-1-7-Bis (4-hydroxy-3-methoxyphenyl) hepta-1,6-diene-3,5- dione) is a compound present in turmeric. Apigenin (4,5,7- trihydroxyflavone), found in many plants, is a natural product belonging to the flavone class that is a glycone of several naturally occurring glycosides. Synthetic Zerumbone, Resveratrol, Curcumin, and Apigenin are from Sigma-Aldrich. Dietary Apigenin was kindly provided by Dr. Andrea Doseff (Michigan State University). Dr. Doseff has developed a method to isolate Apigenin from celery (dietary Apigenin) [25]. The structure of these compounds is shown in Figure 1. Water babies by Coppertone and Sunscreen lotion with SPF30 by MaxBlock were obtained commercially. 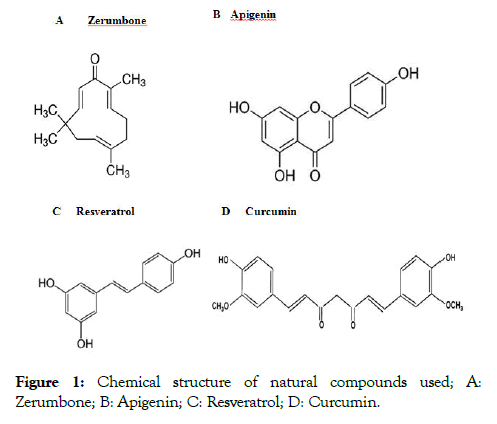 Dilution of compounds and sunscreens for plating on the LB plate

Zerumbone, Resveratrol, Curcumin, and Apigenin (1-100 mM) and dietary Apigenin solutions were made were made in DMSO (vehicle). Since LB plates had 25 ml of medium, the compound added to each plate was calculated for 25 ml medium. In various experiments, 5-100 μl of sunscreens were used to monitor protection from UVR. The same amount of DMSO, used to make the compound, was used as vehicle. The same amount of DMSO was also added to the sunscreens. Cells only (without anything added) were used as the control.

Dilution of the bacterial cells, plating on the LB plates, UVR exposure, growing the bacteria, and recording results

The bacterial culture was diluted so that ~ 200 colonies/100 mM LB plate were obtained. For bacterial cells Optical Density 1=8 × 108 cells/ml. From the initial culture, serial dilutions ranging from 107-102 were done to obtain ~ 200 colonies/plate. DMSO, compounds, and sunscreens were added to 100 μl of sterile water to obtain sufficient volume for spreading on the LB plates. Next, bacteria was plated onto the LB plates containing the compounds or sunscreens, and those without compounds or sunscreens. Half of the plate was covered with cardboard and not exposed to UVR to obtain the cell number growing without UVR (“no UV” control) and another half was exposed to UVR (“UV” experimental). One plate with the cells was not exposed to UVR to monitor if the cardboard was protecting the cells from UVR. A UV lamp emitting 4.25 J/m2/s UVR dose from a lampstand was used. After exposing the cells to UVR, the plates were wrapped with aluminum foil immediately to avoid sunlight and incubated at the 37°C incubator. After 24 hours, the data was recorded, and pictures were taken. For some of the experiments, cells were counted, using a marker by holding the plate against the light.

Experiments with 1 uM of Zerumbone, Resveratrol, and Curcumin and 1 nM of Apigenin or dietary Apigenin were done using 42.5 J/m2 three times. From these three independent experiments, Average and Standard Deviation (STDEV) was calculated using the Microsoft Excel Program. The level of significance (p value) was calculated by a two-tailed paired t-test using Microsoft Excel Program.

The concentration of natural compounds and the amount of sunscreens were optimized so that they do not cause dramatic cell death by themselves without UVR. Zerumbone, Resveratrol, Curcumin, and Apigenin were spread on the LB plates at the concentration indicated in Figure 2. The same amount of DMSO was added in the vehicle plates and to the sunscreens. The cells were plated on the top of the compounds. Cells only were used as the control. Plates were incubated at the 37°C incubator and results were monitored after 24 hours. The results showed that the 100 μM Resveratrol and Curcumin caused some cell death, but 100 uM Zerumbone did not. Surprisingly, 50 nM dietary Apigenin and 100 μl of sunscreens showed some cell death (Figure 2). Interestingly, both the sunscreens showed a significant reduction in colony size indicating inhibition of cell growth. Collectively, some of the compounds and sunscreens used in this experiment are causing cytotoxicity even without UVR. Therefore, these results supported using a lower concentration of compounds and sunscreens for the protection from UVR experiments. Figure 2. Standardization of the compound and sunscreen amounts, and UVR dose tolerable to bacterial cells. A: 100 and 10 μM of Zerumbone, Curcumin, and Resveratrol, and 50 and 10 nM Apigenin were used. The same amount of DMSO was added on the control plates and to the sunscreens. B: Various doses of UVR were used to determine the dose which will not kill all the bacterial cells.

Bacterial cells can tolerate a certain amount of UVR, but if the radiation is too high, they will die due to the adverse effects of UVR [26,27]. To standardize the UVR dose which will not kill all the bacteria, the amount of cell death was monitored by using a range of UVR doses. For this, bacterial cells were plated on the LB plate. Half of the plate was covered with cardboard and the remaining half was exposed to 12.75, 21.25, 42.5, 63.75, 85.75, 127.75, and 255.5 J/m2 UVR. One plate was kept unexposed to UVR as control. The plates were wrapped with aluminum foil immediately and incubated at 37°C for 24 hours, and data was recorded by counting the colony numbers. The results showed that the cardboard was protecting the cells from UVR since the unexposed area of the plate (covered with cardboard) has similar number of cells as the unexposed plate. As shown in Figure 2, 12.75 J/m2 UVR did not show significant cell death. However, the amount of cell death increased through 21.25 J/m2, 42.5 J/m2 and 63.75 J/m2 until all the cells died at 85.75 J/m2. These results demonstrated that ~ 42.5 J/m2 and 63.75 J/m2 are optimum UV dose to obtain a countable number of cells on the plate for the UVR protection from the compounds.

Effect of UV radiation on bacterial survival with and without compounds 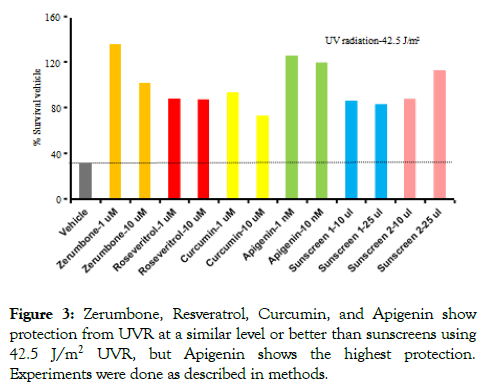 Figure 3. Zerumbone, Resveratrol, Curcumin, and Apigenin show protection from UVR at a similar level or better than sunscreens using 42.5 J/m2 UVR, but Apigenin shows the highest protection. Experiments were done as described in methods.

Determine the effect of the compounds on the protection of bacterial cells at lower and higher doses than 42.5 J/m2 UVR

To examine if the protection from UVR changes at a lower and higher dose, the experiments were done using 21.5 J/m2 and 63.75 J/m2 UVR doses. For compounds, 1 uM of Zerumbone, Resveratrol, Curcumin, 1 nM of Apigenin and 10 ul of sunscreens were used as these concentrations are effective for protection of bacterial cells from UVR (Figure 3). Experiments were done as described in Figure 2. The results showed that 21.5 J/m2 UVR was not sufficient to kill the bacterial cells to obtain a quantitative difference (Figure 4). Both the sunscreens showed the effect with 10 ul (Figure 4). Interestingly, even at the higher dose of UVR, cells were protected from UVR in the presence of compounds, but the protection level was lower as the high dose of UV killed most of the cells. Notably, again the dietary Apigenin showed a higher efficacy than the other three compounds. Both of the sunscreens showed the same effect as they showed previously with 10 μl (Figure 4). These experiments confirmed that Apigenin showed the highest protection from UVR compared to other compounds even at a 1000-fold lower concentration. 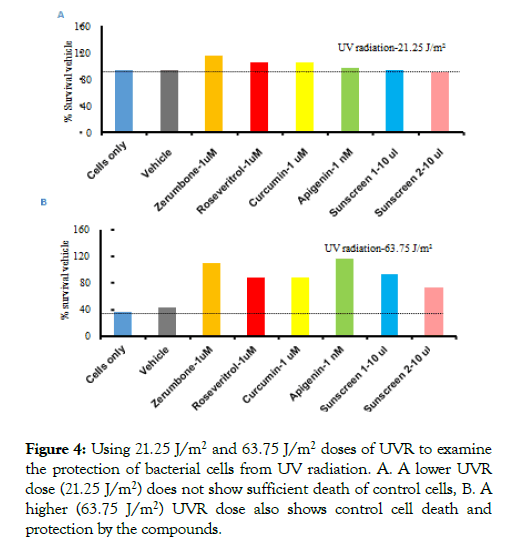 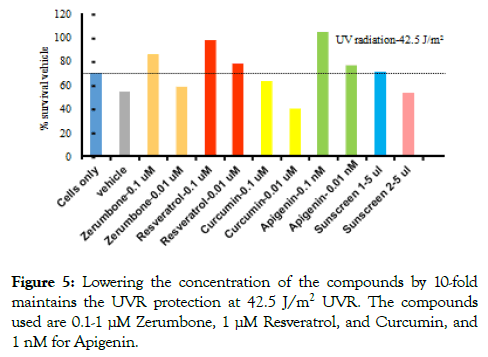 Figure 5. Lowering the concentration of the compounds by 10-fold maintains the UVR protection at 42.5 J/m2 UVR. The compounds used are 0.1-1 μM Zerumbone, 1 μM Resveratrol, and Curcumin, and 1 nM for Apigenin. 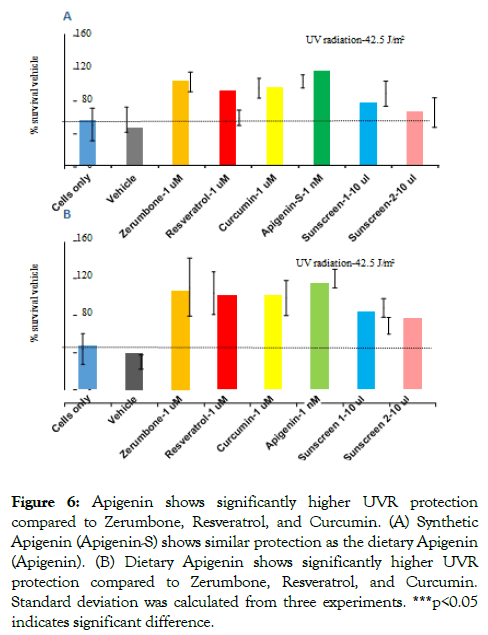 Most of the compounds and sunscreens showed some toxicity in cell survival when used at a very high dose. Additionally, the sunscreens showed reduced colony size when a higher amount was used suggesting that the sunscreens have a deleterious effect on bacterial cell growth. Therefore, the concentrations of compounds and amounts of sunscreens were standardized to examine the protection from UVR. Experiments described in Figure 2 determined the tolerable amounts of the compounds and sunscreens which could be used for efficient protection of bacterial cells from UVR without cytotoxicity. Further experiments using lower concentrations of compounds and sunscreens (Figure 5) demonstrated the lowest amount of compounds and sunscreens which can be used for protection from UV radiation. The dietary products used in this research are less expensive than commercial reagents, easily available, non-toxic, and also orally consumable. As these dietary products are rich in antioxidants, they will increase the anti-oxidant pool and help fight against ROS and cancer causing compounds [31,32]. Moreover, these dietary products can be used to make creams for application to the skin which can have a great beneficial photo-protective effect without toxicity [33,34]. Specifically, this research supports the use of Apigenin as an oral drug and sun protection agent. In support, previous studies showed that Apigenin prevents UV-induced dimer formation in skin fibroblasts, and reduces skin aging and skin cancer [35,36].

This research demonstrated that natural products are effective in protecting cells from UVR at a very low dose and can substitute sunscreens. This study developed a quick and easy method by which natural compounds can be screened to find out their efficacy compared to sunscreens. Eventually, this method will greatly help before testing these compounds in mice and humans. Furthermore, these data showed the power and usefulness of these compounds to use in commercial sunscreens. As research and drug development companies are already using some of these compounds, these results will shed light on the best and most efficient compound for developing drugs.

Copyright: Â© 2019 Ray A. This is an open-access article distributed under the terms of the Creative Commons Attribution License, which permits unrestricted use, distribution, and reproduction in any medium, provided the original author and source are credited. 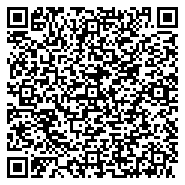