Since the spectral imaging technology emerged, it has gained a lot of application achievements in the military field, precision agriculture and biomedical science. When the fluorescence spectrum imaging first applied to the detection of the feature resource of Chinese herbal medicine, the characteristics of holistic and ambiguity made it a new approach to the traditional Chinese medicine testing. In this paper, we applied this method to study the Chinese medicine north and south isatis root granules by comparing their fluorescence spectra. Using cluster analysis, the results showed that the north and south Banlangen can not be divided by ascription. And these indicate that there is a large difference in the quality of Banlangen granules on the market, and fluorescence spectrum imaging method can be used in monitoring the quality of Radix isatidis granules.

Staring hyperspectral imaging system mainly includes: UV light source with the center wavelength of 254 nm, the Vari Spec Liquid Crystal Tunable Filter (LCTF) produced by American Cambridge Research and Instrumentation Company, lens, CCD, image acquisition card and computer. The system keeps the image area fixed during the work process, and obtains images of different band through tunable liquid crystal filter. The system block diagram is shown in Figure 1. When testing, the sample is placed on the substrate and emits fluorescence after being excited by UV light. Then fluorescence is separated by LCTF, and the sample images to the CCD receiver target surface to each corresponding wavelength, and finally saves in the computer. The work wavelength range of LCTF is from 400 to 720 nm, and the scanning step is set to 5 nm, so it can obtain a set hyperspectral image block consisted of 65 images for one sample, shown in Figure 2. The exposure time of receiver is 1000 ms. 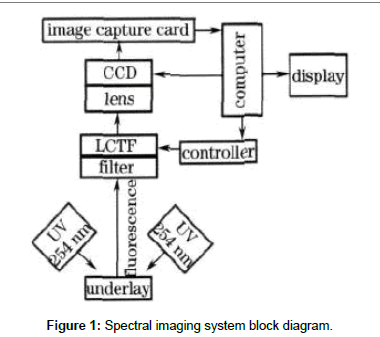 All samples used in the experiment include Radix isatidis and south Radix isatidis standard substance that were purchased from National Institutes for Food and Drug Control, Radix isatidis raw material came from Shaanxi, 10 kinds of Radix isatidis granules produced by different manufacturers and 2 kinds of south isatis root granules were bought from the market. A bag of each granules sample was put out, grinded them into powder with a mortar, then filtered the powder through 60 ~ 130 mesh sieves. 6 g of each sample power was tablet evenly in a mold. Finally the images were captured using spectral imaging device.

The mean gray value of sample image varies with the change of scanning wavelength, and it represents the corresponding fluorescence intensity of the sample. The background thermal noise in CCD is more stable, so the sample can be regarded as the movement of the target under static background. Frame differential method is used to get the difference image. An appropriate threshold was selected to differentiate the image binary progress, and the white area after image binaryzation is the effective area, which can be used to mask the image one by one to get the effective area of the whole image block. Then the fluorescence spectrum curve of the sample was draw, and the characteristic spectrum curve of the sample was normalized. The whole process bases on MATLBA mathematical software platform. 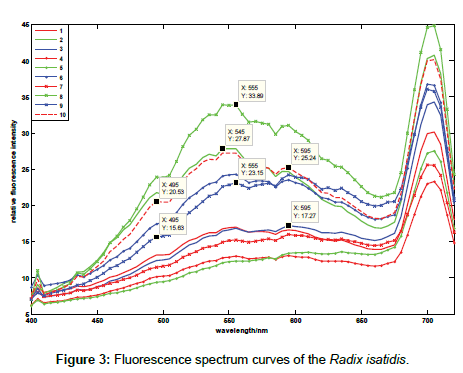 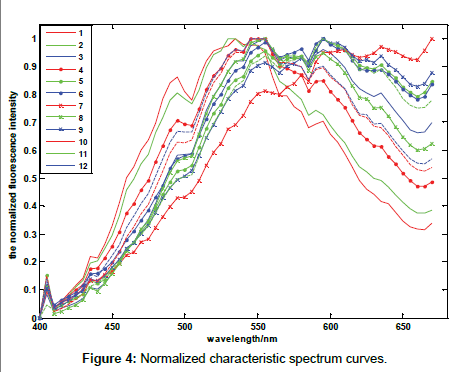 The relationship between granules samples, standard substances and raw material can be directly shown through the cluster analysis results. As shown in Figure 5, L for clustering distance (Table 1), sample 3 and 8 firstly polymerize when L=2.1389; followed sample 5, 9, 11 and 6; then the clustering of sample 4, 10 and 12 is in L=4.8217. The clustering distance of these nine samples is close. Sample 7 and other samples polymerize a class when L=10.4028, suggesting that there is a relatively big gaps in base resource classification for them. After standard substances and raw material polymerizing, all samples lump together in L=13.8156.

Table 1: The values of L for all samples. 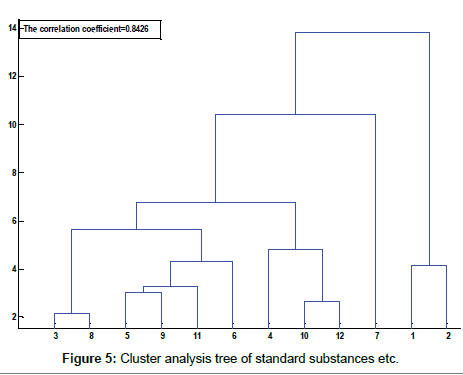 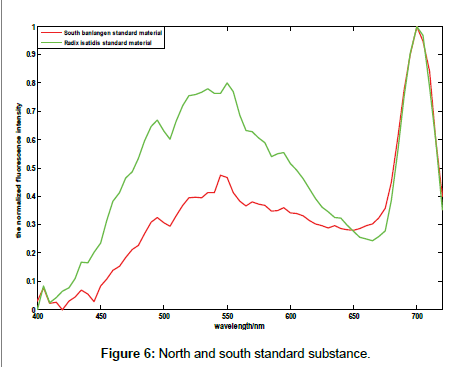 There is a shortage of raw material for south Radix isatidis, so few manufacturers produce south isatis root granules. In Figure 7, No. 1 on behalf of the south banlangen standard material and No. 2 and No. 3 on behalf of two different particle samples, the normalized results show the shapes of characteristic spectrum curves for south isatis root granules and its standard substance are similar, and the curves of two kinds of granules are basically identical. The tiny difference among those is that the wave crest of standard substance at 550 nm is a spike, but the granules samples are gentle. The spectral imaging technology can detect the quality of Chinese patent drug as a whole, rather than a single component. It is an advantage of this technology used in the quality detection of Chinese patent drug. 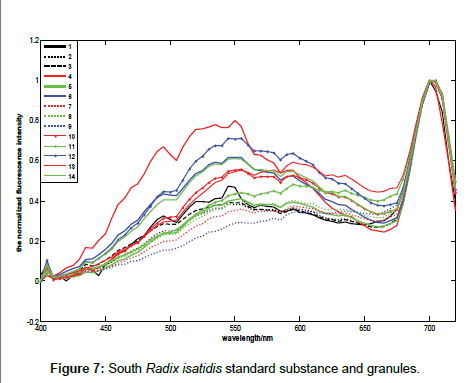 In contrast, No. 1 to 3 on behalf of the south banlangen standard material and its granules samples and No. 3 to 14 on behalf of the north standard material and its granules samples. From the clustering tree graph, some Radix isatidis and south isatis root gathered as a group, indicating that their basic source classification distance is closer, and the rest of Radix isatidis samples are divided into a group. Then these two groups aggregated, and gathered a group with Radix isatidis standard substance. These results reveal a common status quo of Chinese patent drug in market, lax on raw material quality control and lack of standardized management, so that there appearing counterfeit and inferior goods on the market, which led to the uneven quality of Chinese patent drug (Figures 8 and 9). 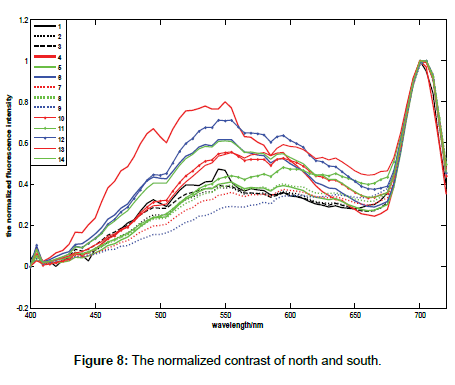 Figure 8: The normalized contrast of north and south. 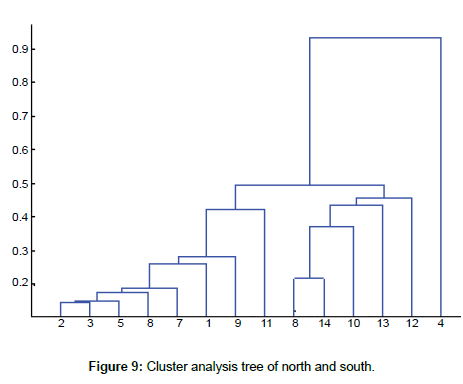 In this paper, we detected some Radix isatidis granules on market using spectral imaging technology, and the results show that there is larger difference in quality among samples. Meanwhile comparing them with south isatis root granules, we found that the Radix isatidis and south Radix isatidis from different families did not be classified based on category. Our study indicates the lack of scientific quality management standard in the use of raw material of Chinese patent drug, and there is still a homonym and adulteration phenomenon, which is the reason for the spotty quality of samples [12]. Fluorescence spectrum imaging method analyses Chinese patent drug on the overall, making up for the disadvantage of other methods that only detect single or two components. So it is expected to become a new method to the quality test for Chinese patent drug which guarantees the stability and reliability of Chinese patent drug.

Copyright: © 2016 Liang L, et al. This is an open-access article distributed under the terms of the Creative Commons Attribution License, which permits unrestricted use, distribution, and reproduction in any medium, provided the original author and source are credited.