Ginseng saponins, commonly called ginsenosides, are the principal components in Panax species and have been occurred in several other Araliaceae plants. According to different aglycones, ginsenosides can be classified into three types: the 20 (S)-protopanaxadiol type such as ginsenosides Rb1, Rc, Rb2, and Rd, the 20 (S)-protopanaxatriol type such as ginsenosides Rg1 and Re, and the oleanolic acid type including ginsenoside Ro and polyacetyleneginsenoside Ro, respectively [1]. These compounds have been widely investigated for their effects on disturbances of the central nervous system, hypothermia and tumor metastasis, and for their antioxidant, antidiabetes, antiaging and radioprotective activities [2]. Especially, ginsenoside Rb1, one of major ginsenosides, exhibited remarkable effects on the central nervous system [2,3] and drug-induced memory impairment [4]. In addition, the regulation of ChAT, NGF and trkA mRNA expression by ginsenoside Rb1 in the rat brain was observed [3]. Therefore, ginsenosides including ginsenoside Rb1 have played as important resources in the development of new drugs [5].

For qualitative and quantitative analyses of ginsenosides, thin layer chromatography (TLC) [6], high performance liquid chromatography (HPLC) [7,8], and liquid chromatography-mass spectrometry (LCMS) [9] have been routinely used. Recently, an enzyme-linked immunosorbent assay (ELISA) system has been opened for natural product analysis as the most promising methodology. We have developed the preparation of monoclonal antibodies (MAbs) against ginsenosides Rb1 [10], -Rg1 [11], and -Re [12]. Furthermore, we set up the ELISA using individual MAbs and applied for the quantitative analysis of ginsenosides [13,14]. On the other hand, regarding immunostaining we succeeded to immunostain the steroidal alkaloid glycosides using anti-solamargine MAb [15] in the first stage, then established the immunostaining methods for G-Rb1 and -Rg1 [13]. According to development of new staining method for glycosides, we named this methodology as eastern blotting for immunostaining of glycyrrhizin [16]. 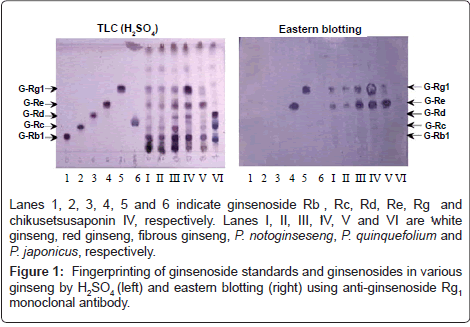 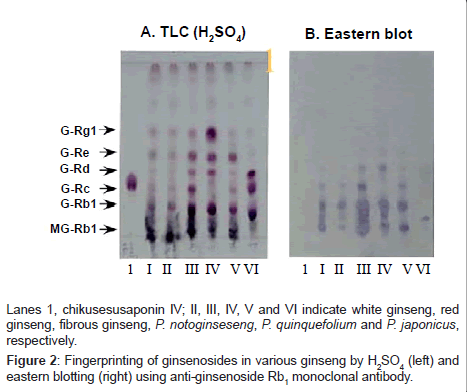 Determination of ginsenoside Rb1 from Acanthopanax koreanum Nakai: Acanthopanax koreanum (Araliaceae), which is a perennial shrub and distributed in Northeast Asia, has been used as a tonic and for treatment of rheumatism, allergies, hepatitis, and diabetes [18,19]. Bioactive constituents of A. koreanum have been reported including several lignans, diterpenes [20,21], and lupane-type triterpene glycosides, which are considered as major constituents [22,23]. Since we have established the combination of ELISA and eastern blotting methods using anti-ginsenoside Rb1 MAb for the identification of ginsenoside Rb1 in Panax species and traditional Chinese medicines [14] as a high sensitive and rapid method, the finding and determination of ginsenoside Rb1 in A. koreanum of Araliaceae family by using ELISA and eastern blotting monitoring will be reviewed in this section. 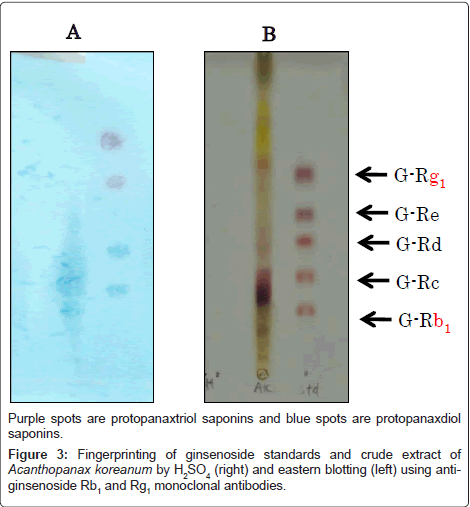 Figure 4 shows the H2SO4 staining (A) and the eastern blotting (B) profiles of the two fractions separated by the immunoaffinity column. Fraction 1 eluted with the washing solvent showed two spots in the eastern blotting profile. A clear unknown spot appeared in fraction 2 eluted with the elution solvent. However, ginsenoside Rb1 was not detected by eastern blotting although it was determined by TLC as indicated in (Figure 4). The unknown compound is proposed to resemble molecular structure and a similar cross-reaction with ginsenoside Rb1, and likely a ginseng saponin having an aglycone of panaxadiol. Moreover, this compound might have the same sugar fragments in the molecule, but possess an additional sugar moiety compared with ginsenodise Rb1, as indicated by their Rf values. These evidences revealed that an unknown compound contained in fraction 2 is chikusetsusaponin VI comparing with the authentic sample directly (Figure 5). 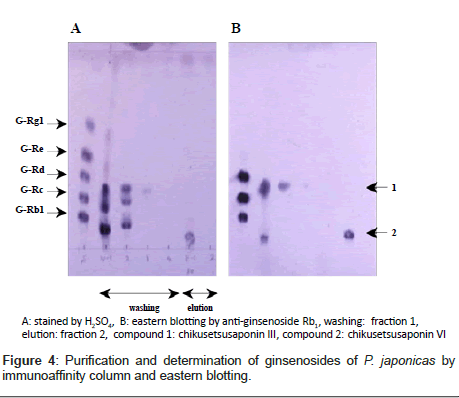 Figure 4: Purification and determination of ginsenosides of P. japonicas by immunoaffinity column and eastern blotting. 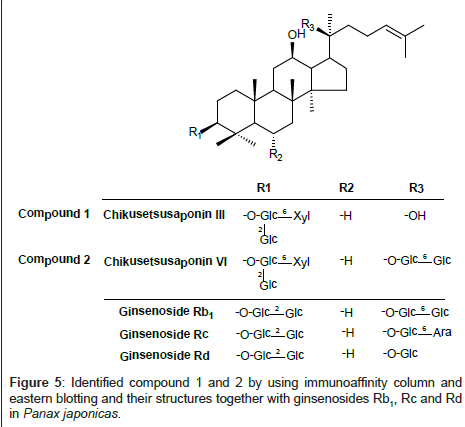 Figure 5: Identified compound 1 and 2 by using immunoaffinity column and eastern blotting and their structures together with ginsenosides Rb1, Rc and Rd in Panax japonicas. Figure 6: Detection of Ginsenosides in Alariaceae plants detected by H2SO4 (A) and eastern blotting (B).

Isolation of new ginsenosides from Panax quenquefolium: American ginseng (Panax quinquefolium L.), which is mainly cultivated in the USA, Canada and China, has been widely used as a tonic and functional foods in various forms such as decoction, powder, tea, capsule, etc. like Asian ginseng (P. ginseng, CA. Meyer). These conventional ginseng products have been reported to have a wide array of pharmacological and physiological actions including antiaging, antidiabetic, anticarcinogenic, analgesic, antipyretic, antistress, and antifatigue, respectively [30-33]. The dammarane-type saponins (ginsenosides) are the major active constituents in American ginseng and with the development of modern chromatography, there are more than 30 ginsenosides such as ginsenosides Rb1, Rb2, Rg1, Rc, Rd, and Re reported [34,35]. However, in comparison with a number of researches on Asian ginseng, the study on American ginseng and its constituents is much less extensive. Figure 7: Staining of ginsenosides in Panax species by eastern blotting (A) and H2SO4 (B). 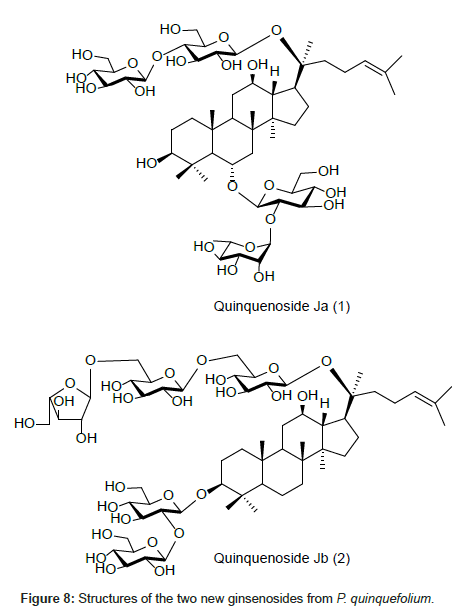 Figure 8: Structures of the two new ginsenosides from P. quinquefolium.

One of the authors (N.H.T) is grateful to the Japan Society for the Promotion of Science (JSPS) for a Postdoctoral Research Fellowship (P10423) at Nagasaki International University.

Copyright: © 2013 Tung NH, et al. This is an open-access article distributed under the terms of the Creative Commons Attribution License, which permits unrestricted use, distribution, and reproduction in any medium, provided the original author and source are credited.