High performance liquid chromatography diode array detector and Ion trap MS combined with some statistical methods was developed for the quality control of Mallotus apelta with malloapelta B as marker compound. In the ESI-MS experiment, both negative and positive ESI modes were used for the detection of malloapelta B. All the results showed that the developed fingerprint assay was specific and could further serve for quality identification and quantitative the content of malloapelta B in the Mallotus sample.

The Mallotus genus, belonging to the Euphorbiaceae family, is widely distributed in Vietnam and the south of China. In Vietnam, roots, stem barks, leaves and fruits of Mallotus species have been used for hundreds of years in traditional medicine for the treatment of chronic hepatitis and enteritis [1]. In previous studies concerned the chemical components and pharmaceutical activities of Mallotus apelta, several benzopyran compounds were isolated and pharmacologically active constituents were determined [2,3]. The major components of Mallotus apelta as a series of benzopyrans such as a new chromene derivative with benzopyran skeleton was isolated and identified as 1-(5,7-dimethoxy-2,2-dimethyl-2H-chromen-8-yl)-but-2-en-1- one or malloapelta B (1) with high yield. Different chromatographic techniques were applied to purify several new compounds 8-(1’-oxo- 3’(R)-hydroxy-butyl)-5,7-dimethoxy-2,2-dimethyl-2H-1-benzopyran; 8-(acetic acid 1’-oxo-3’(R)-hydroxy-butyl ester)-5,7-dimethoxy-2,2- dimethyl-2H-1-benzopyran; 6-(1’-oxo-2’-en-butyl)-5,7-dimethoxy- 2,2-dimethyl-2H-1-benzopyran; 6-[1'-oxo-3'(R)-hydroxy-butyl]-5,7- dimethoxy-2,2-dimethyl-2H-1-benzopyran; 6-[1'-oxo-3'(R)-methoxybutyl]- 5,7-dimethoxy-2,2-dimethyl-2H-1-benzopyran and 6-(1’-oxo- 2’,3’-epoxy-butyl)-5,7-dimethoxy-2,2-dimethyl-2H-1-benzopyran from the leaves of M. apelta which were named as malloapelta C, D, E, F, G, and H, respectively [4-6], among which malloapelta B is present in the greatest amounts. malloapleta B with α,β-unsaturated carbonyl moiety in side chain presented a potent NF-kB (Nuclear Factor-kappa B), which is a major transcription factor that regulates genes responsible for both the innate and adaptive immune response, inhibitory activity (IC50=5.0 μM), and NFAT (Nuclear factor of activated T-cells) which is a general name applied to a family of transcription factors shown to be important in immune response, transcription factor inhibitory (IC50=2.48 μM) and cytotoxic activity against two human cancer cell lines (Hep-G2 and KB with IC50=0.49 μg/mL and 0.54 μg/mL, respectively) [7]. Mallotus apelta is widely distributed and used in Vietnam. The content of each component in the herb varies significantly due to difference in geographic origin, climate condition, environment and other factors. Therefore, controlling the quality of herbal medicines and their derivatives is difficult [8]. Therefore, a holistic approach for quality control is necessary. Recently, the chromatographic fingerprint technique was regarded as a useful method to control the quality of the herbal medicines and their derivatives because this technique emphasizes the systemic characterizations of compositions of samples and focuses on the identification and assessment of the stability of the components [9,10]. In the present study, we used high performance liquid chromatography diode array detector and Ion trap MS combined with some statistical methods to quality control of Vietnamese medicinal preparations of malloapelta B as marker of Mallotus apelta sample. 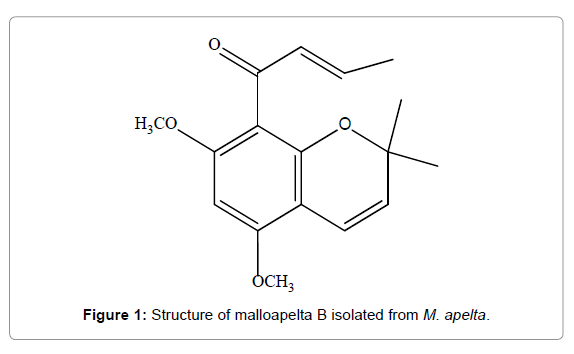 To prepare the herbal extract, 2.5 g plant sample (leaves) was weighed and extracted three times with 25 mL methanol in an ultrasonic bath (Branson Ultrasonic Corporation, Connecticut, US), each time at a temperature between 40-50°C during 60 minutes. Then the combined extracts were filtered through a 240 nm pore size filter paper (Whatman, Hanoi, Vietnam) and evaporated at decreased pressure (60 Pa) at a temperature of 50°C. The sample solutions were diluted 50 times. Then the solution was followed by filtration through a 25 mm syringe filter (VWR International, Leuven, Belgium) having a polypropylene membrane with 0.2 μm pore size.

To prepare malloapelta B sample, a 1000 μg/mL standard stock solution of malloapelta B was prepared and diluted to 10 μg/mL to provide the working solution. Then this solution was used to prepare a series of standards having concentrations of 1 μg/mL, 0.8 μg/mL, 0.5 μg /mL, 0.25 μg /mL, 0.1 μg /mL, 0.05 μg /mL, 0.025 μg /mL in pure 80% methanol solution and also in the extract from Mallotus apelta to allow calibration of the sample. A calibration curve was obtained by plotting the ratio of the peak areas of the analyte (Figure 2).

Figure 2: Calibration curves and chromatogram of malloapelta B.

In the course of optimizing the conditions of separation, the influence of the stationary and mobile phases were firstly investigated.

Considering the presence of benzopyrans in the herbal extraction, a little amount of formic acid was added to the mobile phase to reduce the ionization of these compounds. Different elution conditions with methanol-water, acetonitrile-water and different concentrations of formic acid in water and in organic mobile phase were compared to get the most suitable mobile phase. The results showed that best resolution and shortest analysis time were achieved when the 0.1% formic acid in ACN, and 0.1% formic acid in water system was used as mobile phase. As seen in Figure 3a, not all of the peaks but most of the main peaks include peak’s malloapeta B could be well separated by the optimum gradient elution. It is not necessary to strive for baseline separation of all components in one run, to fulfill the identification of objectives of fingerprint of herbal medicines. So the resolution of the chromatograms of Mallotus apelta sample under the optimized conditions was acceptable.

Two columns (Zorbax Sil C18 column with 2.5 × 250 mm i.d. 5 μm; Zorbax Eclipse XDB C18 column with 4.6 × 150.0 mm i.d., 5 μm) were screened. The best selectivity and resolution can be observed on the Zorbax Eclipse XDB C18 (5 μm; 4.6 × 150.0 mm I.D.) column as shown in Figure 3a. Over 18 sharp and symmetrical peaks were obtained. Column temperature was an important parameter influencing retention, selectivity, system pressure and column stability. The column temperature at 15, 25 and 35°C also were investigated and the results indicated that 35°C was the optimum temperature. Selection of detection wavelength was one of the key factors contributing to a reliable and reproducible HPLC fingerprint of Mallotus apelta. Diode array detector (DAD) was applied to select the optimum wavelength. From the 3D-plots, it was observed that the UV absorption maximum for the malloapelta B was at 254 nm (Figure 3b). Hence, 254 nm was selected as the detection wavelength.

Validation of the quantitative analysis

As shown in Figure 2, the calibration curve showed good linear regression (R2>0.9991) and the limit of detection (LOD) was less than 0.025 μg/mL per injection, indicating that this method is precise and sensitive for the quantitative evaluation of malloapleta B in Mallotus apelta sample. The current method was also utilized to analyze the quantitative of malloapelta B in Mallotus apelta sample collected in Tamdao province. In this sample, content of malloapelta B was found to be 0.2%, while other samples collected in other provinces were found to be lower than that in Tamdao province (Table 1).

Table 1:Mallotus apelta samples with indication of collection time, origin and percent of malloapelta B.

General characters and analysis MS data of the main peaks

LC-MS was adopted to identify the present of malloapelta B in the chemical constituents of M. apelta. ESI in both negative and positive modes was used for the detection of malloapelta B. Positive mode ESI was found to be sensitive for malloapleta B. In the ESI-MS experiment, the molecular weight of malloaplta B was obtained (Figure 4). Then on the basic of the comparison of UV spectrum, HPLC retention time and mass spectra with the reference above. We tentatively identified and deduced the malloapelta B in the Mallotus apelta samples.

Figure 4: MS spectra of malloapelta B.

This study was financially supported by a Grant from Vietnam Academy of Science and Technology (Codes: VAST.HTQT.Belar.05/15-16).

Copyright: © 2016 Tu VA, et al. This is an open-access article distributed under the terms of the Creative Commons Attribution License, which permits unrestricted use, distribution, and reproduction in any medium, provided the original author and source are credited. 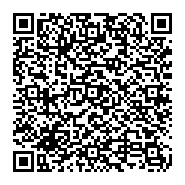