Evaluation of Effect of Gamma Radiation on Total Phenolic Content, Flavonoid and Antioxidant Activity of In Vitro Callus Culture of Artemisia annua

Gamma irradiations are physically induced stresses that has been considered as the rapid and fast method to enhance the quality and quantity of plant characteristics. Phenolic compounds and flavonoids possess a wide range of biological activities such as antioxidant, anti-inflammatory, anti-aging, anti-bacterial and anti-tumor functions and have high economical and pharmaceutical values. In current study In vitro callus cultures were exposed to gamma irradiation at different doses 5, 10, 15, 20, 25, 30 and 35 Gy. After 25 days of gamma irradiation the gamma irradiated callus (M0T0) culture were further subcultured on 0.5 mg/L napthalein acetic acid (NAA) and benzyl amino purine (BAP) till M5T5 generation. The free radical scavenging activity of gamma irradiated methanolic callus extract was measured by 1,1-diphenyl-2-picryl-hydrazyl (DPPH) method. The highest free radical scavenging activity was found in 15 Gy dose of M2T2 generation which is 7.1 ± 0.29 mg mL-1 as compared to control which is 6.71 ± 1.15 mg ml-1. Irradiation dose of 15 Gy showed highest amounts of flavonoid content 103.78 mg ml-1 in M2T2 generation. Gamma irradiation dose of 15 Gy showed high amounts of phenols that is 10.64 ± 1.08 mg/gm as compared to control which is 1.87 mg/g of dry callus.

Gamma irradiations are the physically induced stress that has been considered as the rapid and fast method to enhance the quality and quantity of plant characteristics and it has been widely used in plant biology as an elicitor as effects from low dose stimulation to high-dose inhibition [1]. Bioactive compounds such as phenolics and flavonoids can be induced under proper dose of radiation. Phenolic compounds and flavonoids possess a wide range of biological activities such as antioxidant, anti-inflammatory, anti-aging, anti-bacterial, and antitumor functions [2,3] and have high economical and pharmaceutical values. g-irradiation enhances the production of ROS in a variety of cells resulting in oxidative stress. ROS are the by-products of many degenerative reactions, which will affect the regular metabolism by damaging the cellular components. oxidative stress demonstrated that exposure of plants or cell cultures to adverse environmental conditions induces the production of ROS, such as superoxide radical (O-2), H2O2 and hydroxyl radical in plant cells. The plant evolved cellular adaptive responses like up-regulation of oxidative stress protectors and accumulation of protective solutes. Plants exposed to g-radiation produces various defense and anti-oxidant enzymes many of which produce secondary metabolites which in turn activates the induction of oxidative stress conditions. Gamma irradiation exerts its effects by inducing oxidative stress in the cells which increases the phenolics due to the release of phenolic compounds from glycosidic components and the degradation of complex phenolics into simple ones. These free radicals may break the glycosidic bonds of procyanidin trimers, tetramers and hexamers that leading to the formation of procyanidin monomers, which increase the total phenolic content. However, the key enzyme in the flavonoid biosynthesis is the chalcone synthase (CHS) which catalyzes the formation of chalcones from malonyl-coA and coumaroyl-coA. Chalcones are the important intermediate in the flavonoid pathway which gives rise to various classes of flavonoids. Phenolic compounds are the metabolites that can be derived from pentose phosphate, shikimate and phenylpropanoid pathways [4,5] most importantly they work as an antioxidant compounds having the ability to scavenge free radicals and inhibits the oxidative stress in plant. They play an important role by interacting with signal transduction pathways and cell receptors [6,7]. Free radicals, reactive nitrogen species (RNS), and other reactive oxygen species (ROS) such as superoxide anions, hydroxyl radicals and hydrogen peroxide are an entire class of highly reactive species derived which can be generated from normal oxygen metabolism. According to oxidative damage to most cellular molecules induced by ROS is responsible for several human diseases such as cancer, cardiovascular diseases, atherosclerosis, Alzheimer diseases and ageing [8,9]. The current research shows the effect of g-irradiation on in vitro callus cultures of A. annua and to investigate the effect of gamma radiation on total phenolic, flavonoids content and antioxidant activity of the metanolic extract of gamma irradiated callus culture.

Establishment of callus cultures and media condition: Leaves of size (0.5-1.0 cm long) were excised from 4-week old in vitro germinated seedling and cultured on M.S. medium supplemented with 0.5 mg/l of NAA (Napthalin acetic) and BAP (Benzyl amino purine) and 3% w/v sucrose. The pH of the medium was adjusted to 6.8 ± 0.2. Cultures were incubated at 25 ± 1°C under 16/8 h light and dark photoperiod conditions. The cultures were maintained on same media compositions and sub-cultured after every 4 weeks.

Gamma irradiation to callus cultures: Callus induced from A. annua leaf was exposed to gamma irradiation for elicitation purpose at BARC, Mumbai. The 4 week old callus were placed in irradiation chamber of the gamma cell and it was irradiated at different dose level of g-irradiation (5, 10, 15, 20, 25, 30 and 35 Gy. at room temperature (25 ± 1°C). g-Irradiation was performed using a gamma cell 4000 apparatus equipped with a 60Co g-source (dose rate, 0.23 Gy/s) at Bhabha atomic research centre Trombay, Mumbai. The gammairradiated callus cultures were labeled as G0M0 generation. After 25 days of gamma irradiation the g-irradiated callus (M0T0) culture were subcultured on freshly prepared M.S. medium containing 2% sucrose and 0.5 mg/L napthalein acetic acid (NAA) and benzyl amino purine (BAP). It was labeled as M1T1 generation of callus. Non treated (non g-irradiated) callus were also kept and labeled as control. After M1T1 generation the same protocol was followed after 30 days for subculture of M2T2, M3T3, M4T4 and M5T5 generation [10].

Methanolic extraction of gamma irradiated callus culture: In vitro callus of M1T1, M2T2, M3T3, M4T4 and M5T5 generations were harvested and analyzed for the determination of antioxidant activity, total phenol and flavonoid contents. Dried callus (1 gm) were powdered in mortor and pistel and mixed with 10 ml of methanol and centrifuged at 10,000 rpm. Supernatant was removed and again diluted to 1 mg/ml with methanol and used for further study.

Determination of antioxidant activity of gamma irradiated callus: DPPH Assay and evaluation of IC90: The free radical scavenging activity of gamma irradiated methanolic callus extract was measured by 1,1-diphenyl-2-picryl-hydrazyl (DPPH) method. Different concentration of callus extract was prepared such as 10 μg, 20 μg, 40 μg, 60 μg, 80 μg and 100 μg respectively in 96 well plate and volume was make upto 100 μl by methanol. 150 μl 10 mM DPPH was added in each reaction and incubated for one hour and absorbance was measured at 517 nm. Ascorbic acid was used as standard [11].

Quantitative estimation of total flavonoid content in gamma irradiated callus: Quantitative estimation of total Flavonoid content from gamma irradiated callus extract was determined by using (Biotek Synergy H1 Microplate reader) aluminium chloride method in 96 well plate. 100 μl of callus extract was taken in 96 well plate and 10 l of aluminium chloride was mixed with it followed by 10 μl of potassium acetate was added and volume was make up with 100 μl of distilled water and absorbance was measured at 435 m. Quercetin was used as standard [12].

Quantitative estimation of total phenol content in gamma irradiated callus: Quantitative evaluation of total phenol content of gamma irradiated callus extract was determined by using (Biotek Synergy H1 Microplate reader) Folin-Ciocalteu method in 96 well plate. 100 μl of each extract was added in well followed by 100 μl of Folin-Ciocalteu reagent was added, then 50 μl (2.5%) aqueous Na2CO3 was added an absorbance was measured at 765 nm. Gallic acid was used as standard [13].

Antioxidant activity of methanolic extract of gamma irradiated callus was determined by DPPH Assay. Free radical scavenging is one of the mechanisms of inhibiting free radicals formation in plants. The DPPH free radical inhibiting activity was represented in terms of ascorbic acid equivalent to mg/g of dry callus. The Y equation obtained from the calibration curve is y=0.409x+55.74 R2=0.872 as shown in Figure 1. 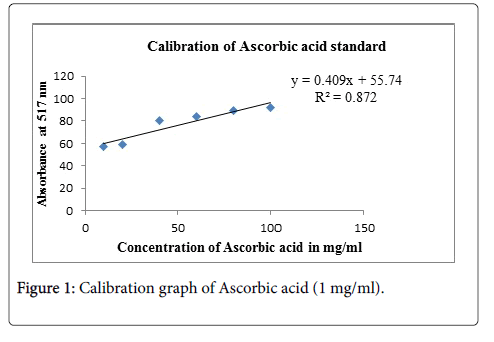 The 90% inhibitory concentration (IC90) was used to measure the percent Free Radical Inhibitory Activity of methanolic extract of gamma irradiated callus. IC90 of the standard ascorbic acid was found 83.76 mg/mL-1. The highest free radical scavenging activity was found in 15Gy gose of M2T2 generation which is 7.01 ± 0.29 mg/mL-1 as compared to control which is 6.17 ± 1.15 (Figure 2 and Table 1). 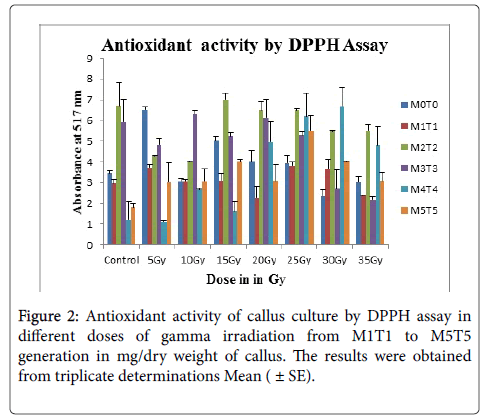 Figure 2: Antioxidant activity of callus culture by DPPH assay in different doses of gamma irradiation from M1T1 to M5T5 generation in mg/dry weight of callus. The results were obtained from triplicate determinations Mean ( ± SE). 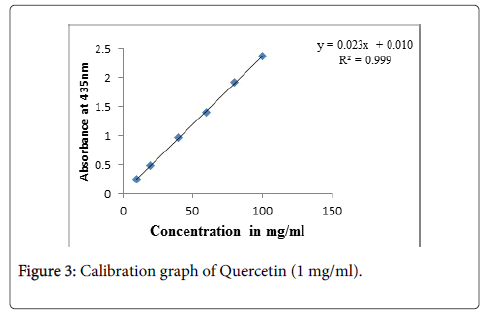 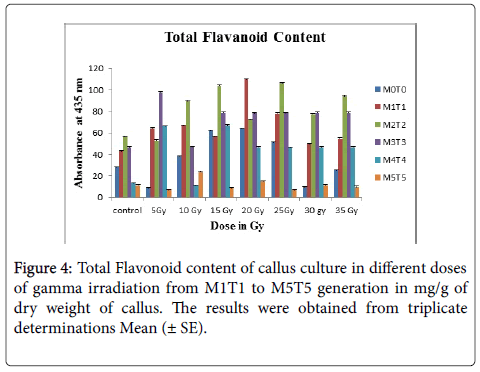 Figure 4: Total Flavonoid content of callus culture in different doses of gamma irradiation from M1T1 to M5T5 generation in mg/g of dry weight of callus. The results were obtained from triplicate determinations Mean (± SE).

Phenolics are important constituents of plants which are responsible for scavenging the free radical due to the presence of hydroxyl groups and it directly responsible for the antioxidative potential [15]. In current study total phenol content is represented in terms of gallic acid equivalent in milligram (mg) per gram of dry callus. The calibration curve (the standard curve: y=0.015x+0.359 R2=0.821) was used to determine total phenolic content as shown in Figure 5. High values of phenol content were found in 15 Gy of M2T2 generation mg GAE/g. Gamma irradiation dose of 15 Gy showed high amounts of phenols that is 10.64 as compared to control which is 5.96 ± 1.49 mg/g of dry callus (Figure 6 and Table 3). 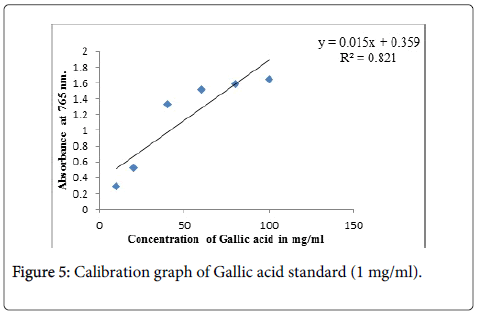 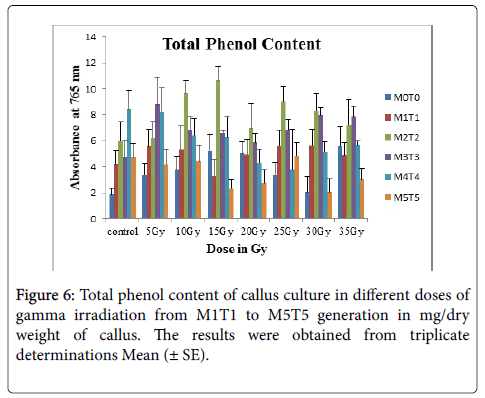 Figure 6: Total phenol content of callus culture in different doses of gamma irradiation from M1T1 to M5T5 generation in mg/dry weight of callus. The results were obtained from triplicate determinations Mean (± SE).

The current study conclude that low doses of gamma irradiations are ecofriendly and a low- cost method that can be used for the elicitation of total phenol, flavonoid and antioxidant activity. In the present study, it was found that low dose of gamma irradiation are effective strategy to enhance the yield of phytochemical content of A. annua. The highest free radical scavenging activity by DPPH method was found at 15 Gy dose of M2T2 generation which is 7.01 ± 0.29 mg/mL-1 as compared to control which is 6.71 ± 1.15 mg/mL-1. The highest amounts of flavonoids contents were found at 15 Gy dose which is 103.78 ± 08 mg/mL-1 in M2T2 generation as compared with control which is 56.62 ± 0.5. Gamma irradiation dose of 15 Gy showed high amounts of phenols that is 10.64 ± 1.08 mg/g as compared to control which is 5.96 ± 1.49 mg/g of dry callus.

The authors declare that there is no conflict of interests regarding the publication of this paper.

This work was supported by DAE, BRNS, Govt of India. Author is thankful to the Department of Atomic Energy, Board of Research in Nuclear Sciences, Mumbai, India for providing financial support under major research project Sanction letter No. 35/14/30/2016-BRNS/35106.

Copyright: © 2018 Patil AS, et al. This is an open-access article distributed under the terms of the Creative Commons Attribution License, which permits unrestricted use, distribution, and reproduction in any medium, provided the original author and source are credited. 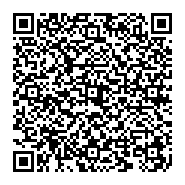