P-Hydroxyacetophenone (pHAP) is an aromatic ketone derivative that is mainly used in the manufacturing of various pharmaceuticals, flavours, fragrances, etc. In the present study, the impact of Mr. Trivedi’s biofield energy treatment was analysed on various properties of pHAP viz. crystallite size, surface area, melting temperature, thermal decomposition, and spectral properties. The pHAP sample was divided into two parts; one was kept as control sample while another part was named as treated sample. The treated sample was given the biofield energy treatment and various parameters were analysed as compared to the control sample by X-ray diffraction (XRD), surface area analyser, thermogravimetric analysis (TGA), differential scanning calorimetry (DSC), ultraviolet-visible (UV-VIS), and Fourier transform infrared (FT-IR) spectroscopy. The XRD studies showed the decrease in crystallite size of the treated sample (61.25 nm) as compared to the control (84.18 nm); however the intensity of peaks in diffractogram was increased in treated sample. Besides, the surface area of treated sample was decreased by 41.17% as compared to the control. The TGA analysis revealed that onset temperature as well as Tmax (maximum thermal decomposition temperature) was increased in the treated sample. However, the latent heat of fusion (ΔH) was decreased from 124.56 J/g (control) to 103.24 J/g in the treated sample. The treated and control samples were also evaluated by UV-Vis and FT-IR spectroscopy and did not show any significant alteration in spectra of treated sample as compared to the respective control. Hence, the overall results suggest that there was an impact of biofield energy treatment on the physical and thermal properties of pHAP sample.

Acetophenones are the aromatic ketones that are mainly used as precursors for resins and fragrances [1]. Their occurrence was found in several natural products like apple, banana, cauliflower, etc. [2]. They were also used in medicine as hypnotics and anticonvulsants in 19th-20th centuries [3]. Hydroxyacetophenones are obtained by direct C-acylation of phenol with acetic acid and used in manufacturing of pharmaceutical products [4]. P-Hydroxyacetophenone (pHAP) is an aromatic ketone (Figure 1) having wide commercial applications. It is also known as piceol that is a phenolic compound and can be obtained naturally from mycorrhizal roots of Norway spruces (Picea abies) [5,6]. It is used in the production of rubbers, plastics, agricultural chemicals, and pharmaceuticals. It acts as a precursor for the synthesis of p-hydroxyacetanilide and paracetamol (analgesic drug) [7]. It is also used as a ketone component in the manufacturing of 1-aryl-3- phenethylamino-1-propanone hydrochloride that is a potent cytotoxic agent [8]. Moreover, they are also used in manufacturing of cosmetics, flavours, and fragrances [9]. Overall, the importance of p-HAP in industries is as the precursor and intermediate compounds. The physicochemical properties like particle size, surface area, and thermal properties of intermediate compounds play a crucial role in chemical and pharmaceutical industries [10,11]. Hence, authors were attempting an alternative strategy i.e., biofield energy treatment and analysed its impact on the physicochemical properties of pHAP. Biofield energy treatment is a type of energy healing which comes under the branch of alternative medicine [12]. These energy therapies are also recommended by National Institute of Health (NIH) and National Centre for Complementary and Alternative Medicine (NCCAM) [13]. Biofield is the name given to the electromagnetic field that permeates and surrounds the living organisms. It is the scientific term for the biologically produced ultra-fine electromagnetic energy field that can function for regulation and communication within the organism [14]. The features of this electromagnetic field are related to the physiological and mental state of the person and research has found that this field might deplete in unhealthy conditions [15]. Hence, the health of living organisms can be influenced by balancing this energy from the environment through natural exchange process [16]. Thus, the human has the ability to harness the energy from the environment or universe and can transmit it to any living or non-living object(s) around the Globe. The objects always receive the energy and responding to the useful way. This process is known as biofield energy treatment. Mr. Trivedi is well known to possess a unique biofield energy treatment (The Trivedi Effect®) that has been reported for altering the growth and yield properties of plants in the agriculture field [17-19]. The effect of biofield treatment was also reported in biotechnology field [20,21] and microbiology research [22-24]. Besides that, the impact of biofield treatment was also reported on physical, thermal and spectral properties of various metals and organic compounds [25-27]. Hence, the current study was designed to evaluate the impact of biofield energy treatment on physical, thermal and spectroscopic properties of pHAP.

P-Hydroxyacetophenone (pHAP) was procured from Loba Chemie Pvt. Ltd., India. The sample was divided into two parts; one was kept as the control while other was coded as treated sample. The treatment sample was handed over to Mr. Trivedi in sealed pack for biofield energy treatment under standard laboratory conditions. Mr. Trivedi provided the treatment through his energy transmission process to the treated group. Both control and treated samples were characterized using XRD, surface area analyser, TGA, DSC, UV-Vis, and FT-IR spectroscopic techniques.

The XRD diffractograms were recorded on Phillips, Holland PW 1710 X-ray diffractometer system. The X-ray generator was equipped with a copper anode with nickel filter operating at 35 kV and 20 mA. The wavelength of radiation used by the XRD system was 1.54056 Å. The XRD data were acquired over the 2θ range of 10°- 99.99° at 0.02° interval with a measurement time of 0.5 seconds per 2θ interval.

The average size of crystallite (G) was calculated from the Scherrer equation. The method is based on the width of the diffraction patterns obtained in the X-ray reflected crystalline region [28].

Where, k is the equipment constant (0.94), λ is the X-ray wavelength (0.154 nm); B in radians is the full-width at half of the peaks and θ the corresponding Bragg angle.

Where, Gc and Gt denote the crystallite size of control and treated powder samples, respectively [29].

Where, SControl and STreated are denoting the surface area of control and treated samples respectively.

The thermal gravimetric analysis of control and treated sample of pHAP was carried out using Mettler Toledo simultaneous thermogravimetric analyser (TGA/DTG). The samples were heated from room temperature to 400°C. The heating rate was kept at 5°C/ min under air atmosphere. From TGA curve, the onset temperature at which sample start losing weight by evaporation and from DTG curve, Tmax (temperature at which sample lost its maximum weight) were recorded.

Differential scanning calorimeter (DSC) of Perkin Elmer/Pyris-1 was used for studies related to melting temperature and latent heat of fusion (ΔH). The DSC curves were recorded under air atmosphere (5 mL/min) and a heating rate of 10°C/min in the temperature range of 50°C to 350°C. An empty pan sealed with cover pan was used as a reference sample. From DSC curve, the melting temperature and latent heat of fusion were obtained.

The percent change in latent heat of fusion was calculated to observe the difference in thermal properties of treated p-hydroxyacetophenone sample as compared to control using following equations:

Where, ΔHControl and ΔHTreated denote the latent heat of fusion of control and treated samples, respectively.

The UV-VIS spectrum of pHAP was recorded in methanol solvent by Shimadzu UV-2400 PC series spectrophotometer. The spectrum was recorded over a wavelength range of 200-400 nm with 1 cm quartz cell and a slit width of 2.0 nm. This analysis was performed to evaluate the effect of biofield treatment on the optical properties of pHAP sample. The UV-VIS spectroscopy can investigates electronic transition between orbitals or bands of atoms, ions and molecules existing in the compound [30].

The samples were crushed into fine powder for analysis. The powdered sample was mixed in spectroscopic grade KBr in an agate mortar and pressed into pellets with a hydraulic press. The FT-IR spectra were recorded on Shimadzu’s Fourier transform infrared spectrometer (Japan). FT-IR spectra are generated by the absorption of electromagnetic radiation in the frequency range 4000-400 cm-1 [31].

X-ray diffraction study was conducted to study the crystalline pattern of the control and treated sample of pHAP. Figure 2 showed the XRD diffractogram of control and treated samples of pHAP. The XRD diffractograms showed a series of intense peaks in the regions of 10º<2θ>26º, which depicted that pHAP sample had high crystallinity and long range ordering. From the diffractograms, no broadening of peaks was evident, which showed that sample was crystalline in nature. In addition, the most intense peak was observed at 2θ equal to 15.79° in control; however, it was observed at 23.22° in treated sample. It indicated that the relative intensities of XRD peaks were altered in treated pHAP as compared to the control sample. It is reported that the change in crystal morphology causes the alteration in relative intensities of the peaks [32]. Moreover, it was reported that pHAP molecules possess O-H--O hydrogen bonds due to which they exhibited a linear chain like structure. Also, these interactions were strong at lower temperature [9]. It is presumed that biofield energy may transfer energy to the treated sample that might cause breaking of these intermolecular interactions. Due to this, the pHAP molecules may form a symmetrical crystalline pattern that further leads to increased symmetry of pHAP molecules. Recently, our group reported that biofield energy treatment has significantly altered the particle size and surface morphology of cadmium powder [25]. Thus, it is assumed that the energy transferred through biofield treatment probably altered the shape and size of molecules of treated sample that might be the responsible for an alteration in relative intensities in treated sample as compared to the control. Moreover, the average crystallite size was calculated using Scherrer equation. The crystallite size of pHAP samples was found as 84.18 nm in the control and 61.25 nm in the treated sample. It indicated that the crystallite size was decreased by 27.23% in the treated pHAP as compared to the control. It was previously reported that ultrasonic energy can cause the decrease in crystallite size [33]. Hence, it is hypothesized that biofield energy treatment might transfer some energy that resulted in the decreased crystallite size. Besides, it was reported that decrease in crystallite size may accelerates the rate kinetics in the chemical reactions [10]. Since pHAP is used as an intermediate in various chemical reactions. Hence, the decrease in crystallite size might enhance the percentage yield of end products by fastening the rate of chemical reaction. 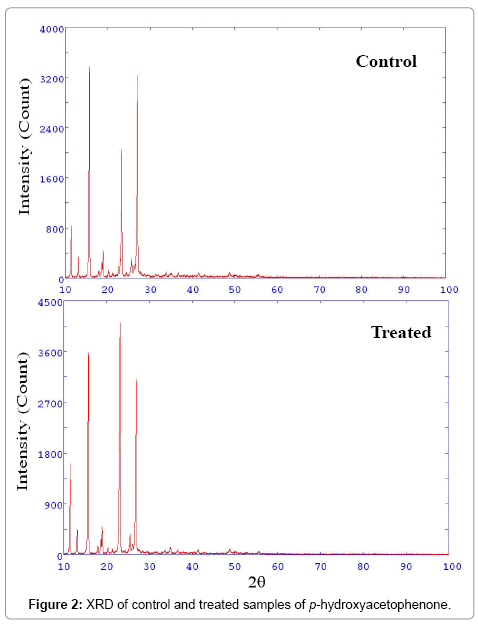 Figure 2: XRD of control and treated samples of p-hydroxyacetophenone. Figure 3: TGA/DTG thermogram of control and treated samples of p-hydroxyacetophenone.

The UV spectra of control and treated samples of pHAP are shown in Figure 4. The UV spectrum of control sample showed characteristic absorption peaks at 202, 219, and 276 nm. The treated sample also showed absorption of light at the same wavelength. The peaks were appeared at 202, 218, and 274 nm in T1 while in T2 sample, at 202, 219, and 275 nm. Moreover, the absorbance at 270-280 nm was assigned to π→π* transition and the less intense band at 200-220 nm was may be accounted for n→π* transition of the compound [36,38]. It suggested that biofield treatment may not cause any change in structure or position of the functional group as well as the energy that is responsible for π→π* or n→π* transitions. 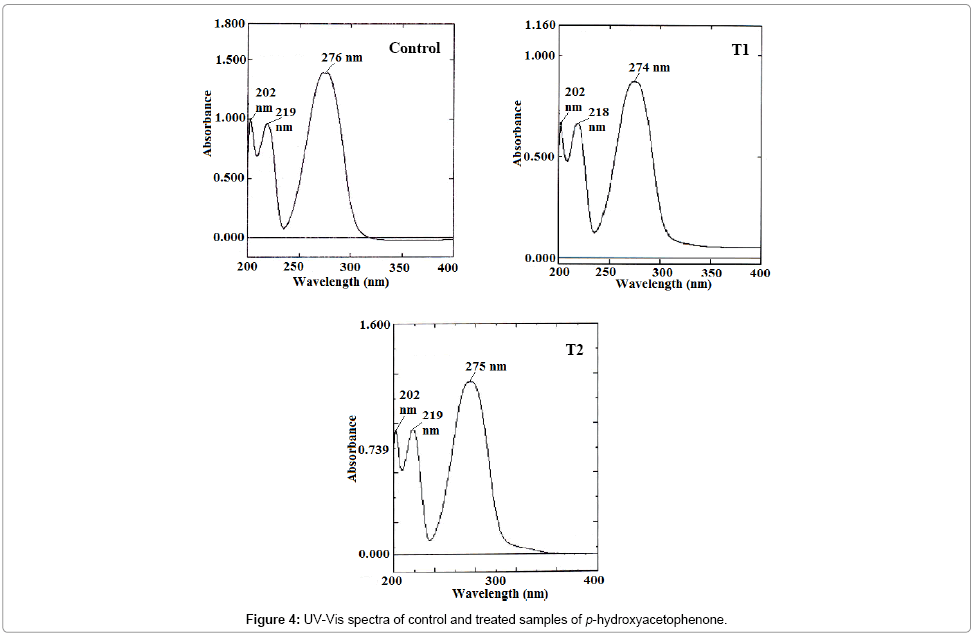 Figure 4: UV-Vis spectra of control and treated samples of p-hydroxyacetophenone.

The FT-IR spectra of control and treated samples are shown in Figure 5. The spectra showed characteristic vibrational frequencies as follows: Figure 5: FT-IR spectra of control and treated samples of p-hydroxyacetophenone.

The overall FT-IR analysis was supported by literature data [39,40] and showed that there was no significant difference between observed frequencies of control and treated samples. Hence, it showed that biofield energy treatment might not induce any significant change at bonding level.

The authors would like to acknowledge the whole team from the Sophisticated Analytical Instrument Facility (SAIF), Nagpur, Indian Rubber Manufacturers Research Association (IRMRA), Thane and MGV Pharmacy College, Nashik for providing the instrumental facility. Authors are very grateful for the support of Trivedi Science, Trivedi Master Wellness and Trivedi Testimonials in this research work.