Salicylic acid is a mono-hydroxyl benzoic acid, and naturally occurring in the bark of willow tree (Salix alba) [1]. It is an important active metabolite of aspirin, which acts as a prodrug to salicylic acid. The salts and esters of salicylic acid are known as salicylates that are widely used as rubefacient and analgesic in several topical formulations. Salicylic acid alleviates peeling of intercellular cement and binds with scales in the stratum corneum, thereby loosening the keratin. This keratolytic effect also renders an antifungal effect as removal of the stratum corneum suppresses the fungal growth [1,2]. It exerts antiinflammatory activity by suppressing the cyclooxygenase (COX) activity that caused to inhibition of pro-inflammatory mediators production. Therefore, it is widely used for the treatment of several skin diseases like acne, psoriasis, seborrhoeic dermatitis, calluses, keratosis pilaris, and warts due to its keratolytic, fungicidal, bacteriostatic, and photo-protective properties [3,4]. Salicylic acid is also a phytohormone and useful in growth and development of whole plant [5].

Sparfloxacin is a difluorinated quinolone antibiotic with broad spectrum antibacterial activity. Additionally, it also possesses a good in vitro activity against several unusual pathogens such as legionellae, chlamydia, rickettsiae, mycoplasmas, mycobacteria, etc. [6,7]. Sparfloxacin showed good topical absorption and had excellent penetration into upper and lower respiratory tissues; therefore it is extensively used in respiratory infections. It inhibits DNA replication and transcription in bacteria by inhibiting the DNA gyrase or topoisomerase IV enzyme [8]. The gastrointestinal discomfort and CNS effects are the most common adverse effects associated with sparfloxacin [9]. Chemical stability of pharmaceutical drugs or active ingredients is a matter of great concern as it affects the safety, efficacy, and shelf life of drugs or drug products [10]. Therefore, it is important to find out an alternate approach, which could enhance the stability of drugs by changing the structural (bond strength, bond length, dipole moment etc.) properties of these compounds.

Recently, biofield treatment has been reported to alter the physical and structural properties of various living and non-living things [11,12]. Biofield is the electromagnetic field that permeates and surrounds the living organisms. It is the scientific term, used for biologically created electromagnetic energy, essential for regulation and communications within the organism [13]. As per Planck M, electrical current exists inside the human body in the form of vibratory energy particles like ions, protons, and electrons. These moving particles generates a magnetic field in the human body [14,15]. Mr. Trivedi has the ability to harness the energy from environment or universe and can transmit into any living or nonliving object around this Globe. The object(s) always receive the energy and responding into useful way, this process is known as biofield treatment. The National Center for Complementary and Alternative Medicine considered this biofield treatment (therapy) in subcategory of energy therapies [16].

Mr. Trivedi’s biofield treatment has substantially changed the antimicrobial susceptibility, biochemical reactions pattern and biotype number of different human pathogens [13,17]. It also showed a significant impact in the field of agriculture and biotechnology, with respect to yield, nutrient value, and quality of products [18- 20]. Mr. Trivedi’s biofield treatment has also changed the various physicochemical and structural properties of metals and ceramics [12,21-23].

By conceiving the impact of biofield treatment on structural property of metals and ceramics, the present study was aimed to further explore the biofield treatment on two pharmaceutical drugs i.e., salicylic acid and sparfloxacin with respect to effects on their structural property. The effects were analyzed using Fourier transform infrared (FT-IR) and Ultraviolet-Visible (UV-Vis) spectroscopic techniques.

Salicylic acid was procured from Qualigens Fine Chemicals (Mumbai, India), and sparfloxacin was procured from Sigma-Aldrich (MA, USA). Each drug sample was divided into two parts i.e., control and treatment. The control groups were remained as untreated and treatment groups were handed over in sealed pack to Mr. Trivedi for biofield treatment under standard laboratory condition. Mr. Trivedi provided this treatment through his energy transmission process to the treatment groups without touching the samples. After that, both the control and treated samples of salicylic acid and sparfloxacin (Figure 1) were analyzed using FT-IR spectroscopy and UV-vis spectroscopy.

Figure 1: Chemical structure of (a) salicylic acid and (b) sparfloxacin.

FT-IR spectra of salicylic acid and sparfloxacin (control and treated) were recorded on Shimadzu’s Fourier transform infrared spectrometer (Japan) with the frequency range of 4000-500 cm-1. The FT-IR spectroscopic analysis was carried out to evaluate the impact of biofield treatment at atomic level like bond strength, and stability of the structure of both drugs [24].

UV spectroscopic analysis of salicylic acid and sparfloxacin were acquired on a Shimadzu UV-2400 PC series spectrophotometer with 1 cm quartz cell and a slit width of 2.0 nm. The analysis was performed using wavelength range of 200-400 nm. This study was performed to evaluate the effect of biofield treatment on the structural property of tested drugs with respect to functional groups and their position. Figure 2: FT-IR spectra of salicylic acid (a) control and (b) treated.

Overall, the FT-IR data indicates a significant impact of biofield treatment at atomic level of salicylic acid as compared to control. The FT-IR data of treated salicylic acid exhibited the shifting in wavenumber of some bonds with respect to control sample. For instance, an upstream shifting in wavenumber of C-H stretching from 2999 (control) to 3004 cm-1 (treated) and 2831 to 2837 cm-1; and C=O asymmetric stretching vibrations from 1670 to 1683 cm-1 and 1652 to 1662 cm-1. The frequency of vibrational peak (``ν) depends on two factors i.e., force constant and reduced mass, which can be explained by following equation [26].

here, c is speed of light, k is force constant and μ is reduced mass.

If reduced mass is constant, then the frequency is directly proportional to the force constant; therefore, increase in frequency of any bond suggested a possible enhancement in force constant of respective bond [24]. Based on this it is speculated that the force constant and bond strength of C-H and C=O bond might increased after biofield treatment as compared to control. Additionally, the intensity of peaks at 1558 cm-1 (aromatic C=C stretching) and 1501 cm-1 (C-C stretching) was significantly increased in biofield treated sample, as compared to control. This might be due to alteration in ratio of change in dipole moment (∂μ) to change in bond distance (∂r) [27]. Figure 3: FT-IR spectra of sparfloxacin (a) control and (b) treated.

Overall, the FT-IR results of biofield treated sparfloxacin exhibited the shifting in wavenumber of some bonds with respect to control sample. For instance, a downstream shifting in frequency of vibrational peaks like C-H stretching from 2961 to 2955 cm-1 and 2848 to 2818 cm-1; C-F stretching from 1151 to 1135 cm-1; and upstream shifting in wavenumber of C=O (pyridone) stretching from 1641 to 1648 cm-1. This slight change in wavenumber of peaks referred to corresponding changes in the force constant of that bond as compared to control. Increase in the force constant of stretching peaks, suggests the enhancement of bond strength and vice versa; likely, increasing in the force constant of bending peaks referred to increase in rigidity of bond in a molecule [25]. Additionally, C=C stretching (pyridone) peaks at 1628 cm-1 and N-H bending 1507 cm-1 were not observed in the control sample of sparfloxacin. However, these were significantly observed in treated sample. This might be observed due to very low intensity to be detected in control sample. It indicates a possible change in the ∂μ/∂r of these peaks [27], which might be occurred due to impact of biofield treatment at the atomic level (dipole moment) of treated sparfloxacin as compared to control.

UV spectra of control and treated samples of salicylic acid are shown in Figure 4. It revealed that UV absorption peaks of treated sample were shifted to higher wavelength (λmax) from 295.8 → 302.4 nm and 231.2 → 234.4 nm. The existing literature on principle of UV spectroscopy suggests that a compound can absorbs UV light due to presence of either or both conjugated pi (π) -bonding systems (π - π* transition) and nonbonding electron system (n-π* transition) in the compound. The UV absorption phenomenon occurred when electrons travelled from low energy orbital (i.e., σ, n and π) to high energy orbital (i.e., σ* and π*). There is certain energy gape between σ-σ*, σ-π*, π -π* and n-π* orbitals. When this energy gap altered, the wavelength (λmax) was also altered respectively [24]. Based on this, it is speculated that, due to influence of biofield treatment, the energy gap between π - π* and n - π* transition in salicylic acid might be altered, which causes shifting of wavelength (λmax) in treated salicylic acid as compared to control. 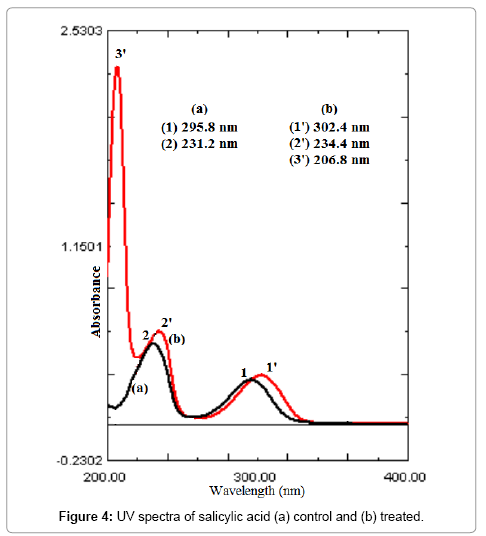 Figure 4: UV spectra of salicylic acid (a) control and (b) treated.

UV spectra of sparfloxacin (control and treated) are shown in Figure 5. It showed the shifting of lambda max (λmax) of UV absorption peaks in treated sample from 373.8 → 380.6 nm and 224.2 → 209.2 nm; and absorption peak at 304.4 were appeared at the same wavelength in both samples. This suggests a possible alteration in the energy gap between π-π* and n-π* transition in treated sparfloxacin as compared to control. 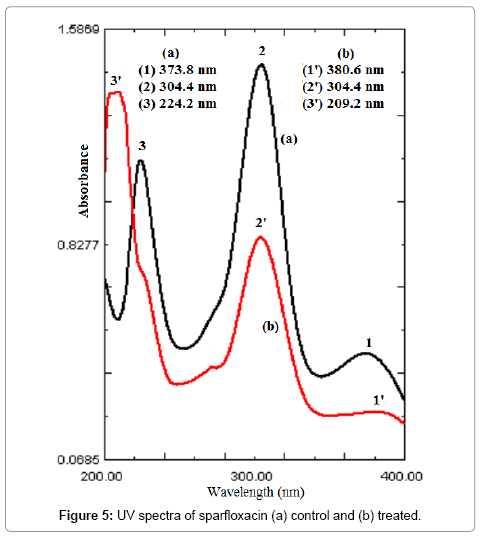 Figure 5: UV spectra of sparfloxacin (a) control and (b) treated.

The authors would like to acknowledge the whole team of MGV Pharmacy College, Nashik for providing the instrumental facility.