Impact of Quercetin, Diallyl Disulfide and Nimbolide on the Regulation of Nuclear Factor Kappa B Expression in Prostate and Breast Cancer Cell Lines

Nuclear transcription factor kappa B (NFκB) is a ubiquitous and evolutionarily conserved transcription factor that is activated in response to a number of carcinogens and inflammatory stimuli including cytokines, tumor promotors, and cigarette smoke, environmental pollutants, ionizing radiation and stress. In resting cells, NFκB is kept in an inactive state in the cytoplasm as a hetero trimer consisting of p50, p65 and Iκβ proteins including IKKα, IKKβ and IKBε [1]. In response to activation signals, the IKBα subunit is phosphorylated at serine residues 32 and 36 and ubiquitinated at lysine residues 21 and 22 which target them for proteosome mediated degradation. The p65 subunit is then phosphorylated and translocated to the nucleus where it binds to a specific DNA sequence and activation the transcription of over 500 genes involved in immunoregulation, growth regulation, inflammation, carcinogenesis and apoptosis. The phosphorylation of IκBα is catalyzed by IκBα kinase (IKK) which consists of three subunits, IKKα, IKKβ, IKKε (also called NEMO). Some natural plant derivatives have been reported to inhibit NFκB activation through modification of a specific cysteine residue (Cys179) in the activation loop of IKKβ [2-4].

Diallyl disulfide (DADS) a major organosulfur compound derived from garlic has been shown to decrease the formation of carcinogen induced cancers and to inhibit the proliferation of various cancer cells [17]. The mechanism of action of DADS is associated with activation of metabolizing enzymes, suppression of the formation of DNA adducts, antioxidants, regulation of cell cycle arrest, induction of apoptosis and differentiation, histone modification and inhibition of angiogenesis and invasion.

Nimbolide, a tetranortriterpenoid isolated from the leaves and flowers of neem tree has attracted recent research interest due to its anti proliferative and apoptosis inducing effects on a panel of cancer cells [18,19]. Recent studies demonstrated that nimbolide exerts potent anticancer effects in HepG2 cells by abrogating NFκB activation and its downstream events such as activation of wnt/β-catenin pathway and apoptosis evasion [20].

The present aim is to investigate the role of quercetin, DADS and nimbolide on the regulation of NFκB expression which is a key regulator of gene involved in cell activation and proliferation. We studied on both prostate and breast cancer cell lines, separately.

Viable cell either PC-3/MCF/MDA MB 231 cells were measured by a colorimetric assay composed by solution of a tetrazolium compound MTT (dimethythiazolyltetrazolium bromide). MTT is bio reacted by cell into a formazon product that is soluble and the absorbance of the formazan at 570 nm is measured directly. Cells were seeded at a density of 5×103 cells/well in a 96 well plate and incubated at 24 h at 37°C in 5% CO2. After attachment the cells were washed with PBS and then Serum Free Medium (SFM) was added for 6-12 h. The cells were added into fresh medium containing different concentrations of quercetin/DADS/Nimbolide in the respective experiments and allowed to grow for an additional 24 and 48 h after respective treatment. The medium was removed and washed twice with PBS and 100 μl of 0.5 mg/ml MTT solution was added to each well and incubated for 2-3 h. After incubation 100 μl of DMSO was added for solubilization of cells and then kept in dark for 1 h. The intensity of the color developed was read at 570 nm in an ELISA reader. The cell viability was calculated as follows.

Triplicate measurements with different quercetin/DADS/nimbolide concentrations were performed and the concentrations that gave a 50% reduction in a number of living cells (IC50) were estimated.

The data were analyzed using the SPSS windows students’ version software. For all the measurement, one way ANOVA followed by Student Newman-Keuls’ test was used to assess the statistical significance of difference between control and drugs treated. A statistically significant difference was considered at the level of p<0.05.

Effect of quercetin on cell viability of PC-3 cell line 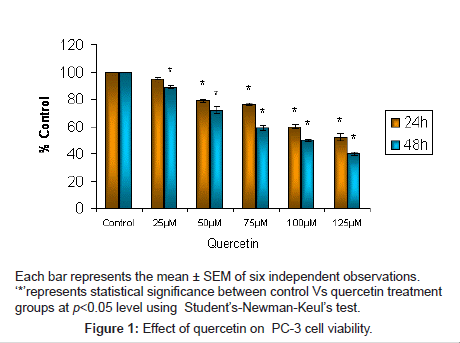 Effect of DADS on cell viability of PC-3 cell line

50% inhibition was found in 40 μm and hence for western blot we selected 20 and 40 μM to identify the effect DADS in signaling molecules (Figure 2). 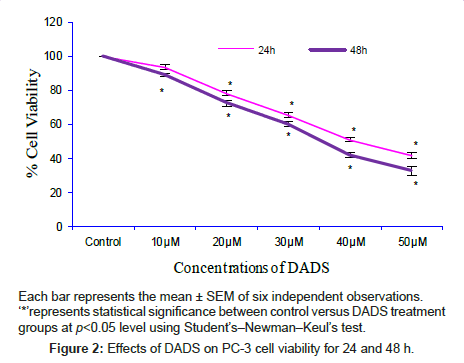 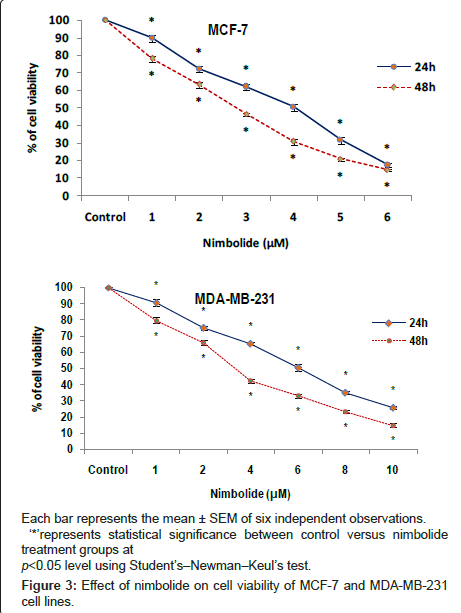 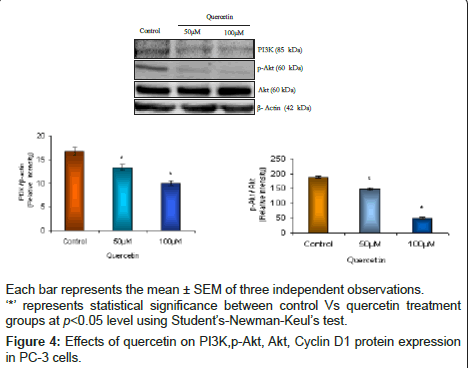 Effect of quercetin on protein levels of PI3K and p-Akt

Protein levels of PI3K and p-Akt were assessed by western blot analysis. PI3K decreased after quercetin treatment in PC-3 cells (Figure 4). Akt is a cell survival protein. Phosphorylation of serine 473 of Akt was decreased significantly but not totals Akt. So, p-Akt was normalized with total Akt (Figure 4).

Effect of quercetin on protein levels of NFκB in PC3 cells 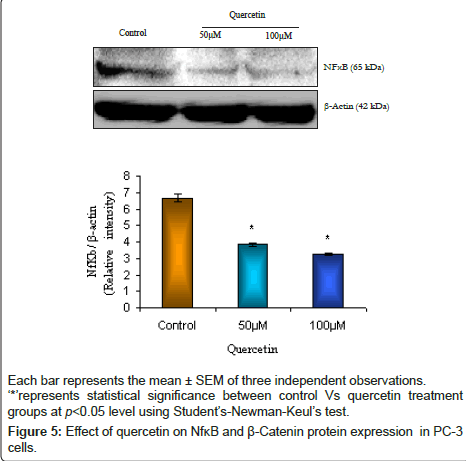 Effect of DADS on protein levels of PI3K and pAkt

Protein levels of PI3K and pAkt were assessed by western blot analysis. PI3K decreased after DADS treatment in PC-3 cells (Figure 6). Akt is a cell survival protein. Phosphorylation of serine 473 of Akt was decreased significantly but not totals Akt. So, pAkt was normalized with total Akt (Figure 6). 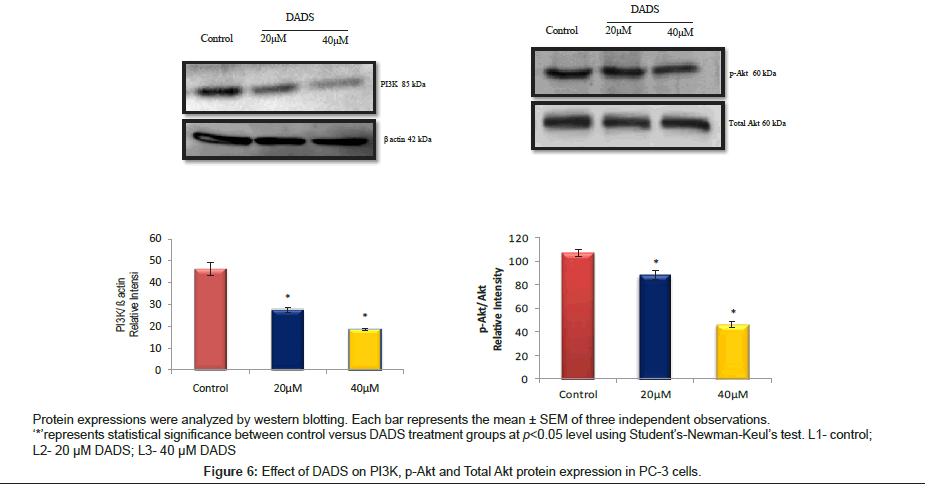 Effect of DADS on IKKα, IKKβ and NFκB expression in PC3 cells 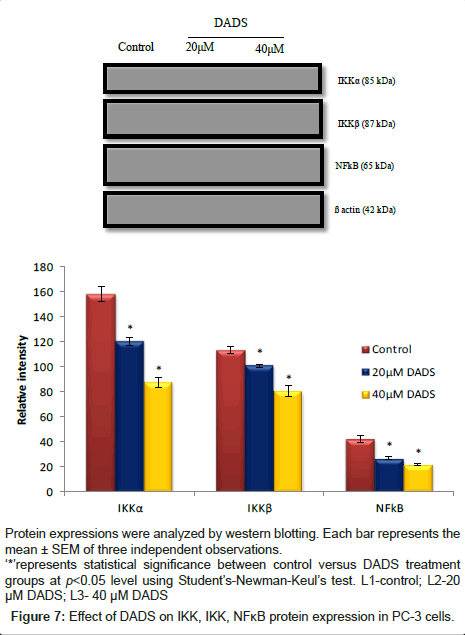 Effect of nimbolide on protein levels of PI3K and pAkt

Protein levels of PI3K and pAkt were assessed by western blot analysis. PI3K are intracellular signaling molecules of IGF pathways. PI3K are central regulator of Akt phosphorylation. The present study showed that PI3K protein expression decreased after nimbolide treatment in both the breast cancer cells (Figure 8). Akt is a cell survival protein. PAkt is constitutively expressed in breast cancer cells. This combined treatment also inhibits the phosphorylation of Akt. But, the total Akt level remains unchanged. So, the pAkt was normalized with total Akt (Figure 9). Nimbolide inhibits the Akt phosphorylation in MCF-7 and MDA-MB-231 cells. From the above results, it is proved that nimbolide potentially decreased the pAkt expression and leads to inhibition of cell proliferation and survival (Figure 9). 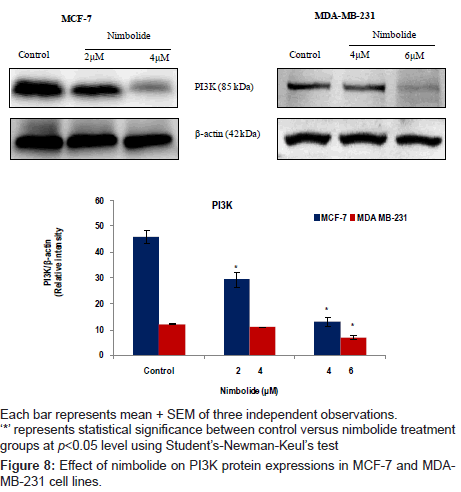 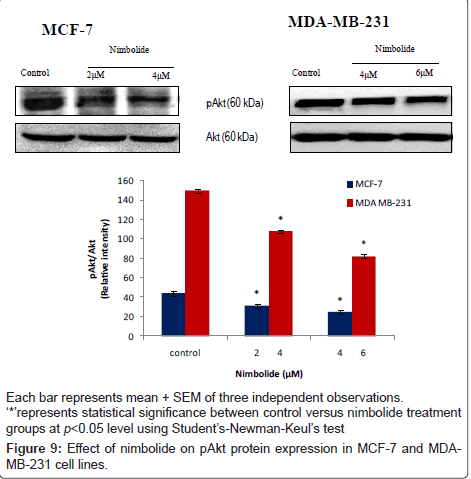 The IKKα and IKKβ enzyme complex is part of the upstream NFκB signal transduction cascade. NFκB is an important transcription factor involved in cell survival. Nimbolide (2,4 μM concentrations in MCF- 7 cells and 4,6 μM in MDA-MB-231 cells) significantly decreased the protein expressions of IKKα, IKKβ, and NFκB in both the cell lines (Figure 10). 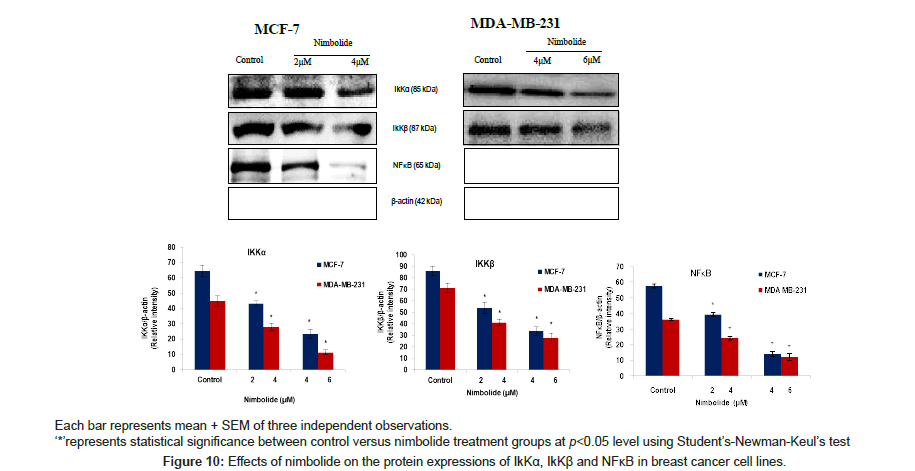 PI3K/Akt survival pathway is constitutively up regulated either due to the loss of function and/or mutations of the tumor suppressor PTEN, which functions as a negative regulator of PI3K through its lipid phosphatase activity [28]. In particular, PTEN dephosphorylates the D3 position of the key lipid second messenger phosphotidyl inositol 3,4,5-triphosphate (PIP3) [28,29]. Our results showed that the protein expression pAkt was significantly decreased in nimbolide treated cells. The protein expression of PI3K, an up-stream regulator of Akt, was also significantly decreased upon nimbolide treatment in both MCF-7 and MDA-MB-231 cell lines.

Anti-proliferative effects of PI3K are due to its activation of serine/ threonine protein kinase Akt. Quercetin inhibits Akt phosphorylation. Previous reports also support the present study that quercetin decreased phosphorylation of Akt and expression of survive in prostate cancer cells [30,31]. Decrease in PI3K levels is also one of the reasons for decreased pAkt. In the present study PI3K expression significantly decreased after quercetin treatment. This argument is supported by previous studies showed that quercetin is an inhibitor of PI3K [32]. PI3K-Akt and its associated regulatory signaling pathways are potential targets for therapeutic intervention and molecular based approaches for management of prostate cancer in humans. By suppressing the activation of Akt-1, quercetin can promote apoptosis via several pathways. Thus, quercetin is a potent inhibitor of PI3K/Akt pathway.

Prostate cancer specifically shows biochemical abnormalities related to Akt that may be important in sustaining tumor growth by preventing apoptosis and promoting proliferation and angiogenesis [33]. Akt over expression has been demonstrated in prostate cancer [34]. Complete activation of the catalytic activity of Akt requires phosphorylation of a threonine residue at 308 and a serine residue at 473. It is possible that Akt shows par-tial activation with phosphorylation at the threonine 308 position [35]. Hence, phosphorylation at ser 473 is the key for the complete activation of Akt. In the present study, DADS significantly decreased the expression of pAkt in PC-3 cells at 40 μM concentration and also caused a significant decrease in the expression of ser 473 phosphorylated Akt. This is supported by the study conducted by Xiao et al. [36], in which treatment with diallyl trisulfide, a constituent of processed garlic mediated Akt inactivation and dephosphorylation of Bad and its mitochondrial translocation resulting in apoptosis. In the present study, since there is a decreased expression of AKT phosphorylation due to DADS treatment, there is also activation of pro-apoptotic proteins Bad and Bax which will finally lead to apoptosis in prostate cancer cells. Thus apoptotic effects of DADS are mediated through inhibition of Akt phosphorylation.

The activation of NFκB typically occurs through site specific phosphorylation and subsequent degradation of IκB. This allows the translocation of NFκB into the nucleus to bind the NFκB -specific DNA-binding sites and regulates gene transcription. NFκB activation is regulated by Akt-signalling pathway [37]. NFκB plays an important role in the apoptotic process [38]. Major target of Akt is the NFκB pathway. Upon activation by an IκB kinase, NFκB translocates into the nucleus where it regulates gene expression. Many of its target genes have antiapoptotic effects, such as Bcl-2, or regulate the cell cycle, such as c-Myc and cyclin D1. Inhibition of NFκB by other anticancer drug has been observed in prostate cancer, breast cancer and other cancers [39]. In the present study DADS inhibits NFκB, IKKα and IKKβ protein expression in prostate cancer cells. Quercetin did the same. In breast cancer cells also nimbolide inhibits NFκB, IKKα and IKKβ protein expression.

NFκB a major target of Akt, which regulates various cellular process which leads to cancer cells progression. Thus, the present study proves that treatment with quercetin/DADS/nimbolide inhibited the NFκB mediated proliferation and survival of prostate and breast cancer cells. Our results suggest that quercetin/DADS/nimbolide may be a potential therapeutic agent for prostate and breast cancer in future. Further in vitro and in vivo studies on the molecular mechanism are warranted.

Financial assistance by DBT, CSIR, DST-PURSE and Government of India is greatly acknowledged.

Copyright: © 2013 Arunakaran J, et al. This is an open-access article distributed under the terms of the Creative Commons Attribution License, which permits unrestricted use, distribution, and reproduction in any medium, provided the original author and source are credited.