Licorice (Glycyrrhiza species) is an important natural product that is frequently used in traditional Chinese medicine. In this review article, we discuss the quality control of licorice using monoclonal antibodies against the licorice components glyzyrrhizin (GC) and liquiritin (Liq); the monitoring of licorice extract activity using an assay system in mice; and the isolation of two active phenolic components, isolitiritigenin and formononetin, and their effectiveness for improving in vitro fertilization in mice. Finally, we present the outstanding questions and potential applications of licorice root extract.

Glycyrrhiza species (Leguminosae), commonly known as licorice root are perennial plants that grow up to 1.5 m high and are distributed in drylands from Western Europe to Russia, and are particularly abundant in China and Mongolia. G. uralensis Fisch (Figure 1) and G. glabra are listed in the Japanese pharmacopoeia.

Nearly 500 compounds have been identified in licorice root; including glycyrrhizin (GC)-which is controlled at a concentration of more than 2.5% and the flavonoid liquiritin (Liq) has a quantitative limitation in Japanese Pharmacopoeia [1]. Flavonoids have antihepatotoxic, anti-inflammatory, anti-ulcer, anti-allergenic, and antiviral as well as cardioprotective activities [2]; owing to these medicinal properties, licorice root is used in at least 70% of traditional Chinese medicines for treatment of nervous, alimentary, respiratory, endocrine, and cardiovascular system diseases [3]. Licorice is also widely used as a sweetener in the production of confectioneries and soy sauce and is therefore in high demand worldwide. Using a Monoclonal Antibody (MAb) against GC prepared in our laboratory [4], we previously reported on the synergistic effects of the major constituent of licorice including GC and other constituents [5], the interfacial behavior of GC [6], and the identification of Glycyrrhiza species with higher GC content [7].

Artificial insemination is an assisted reproductive technology in which pregnancy is achieved by artificially introducing semen into the female genital tract; it is an indispensable technology for breeding cattle and other livestock and is used for infertility treatment in humans [8]. An in vitro Fertilization (IVF) system has been developed in mice, and many mouse lines have been produced by this method by freezing embryos and/or fertilized eggs [9]. However, IVF using sperm that is frozen or refrigerated over a long term would allow mouse lines to be preserved more easily. Sperm cells start moving immediately after ejaculation and undergo maturation after a defined period of time (capacitation), causing an acrosome reaction that leads to fertilization of an egg. However, the efficiency of IVF is relatively low. It is known that several traditional Japanese medicines (TJM) like Tokishakuyakusan for female infertility [10] and Hochuekkito for male infertility [11]. Furthermore, Traditional Chinese herbal medicine have been searched widely for female infertility [12,13]. We previously investigated the effects of crude licorice extract on the IVF rate [14] and isolated two active components of licorice that may be responsible for these effects [15]. In this review, we describe the active components of licorice extract, their isolation, and potential applications for improving IVF rates.

Components of Licorice and Quantitative and Qualitative Control

Licorice is listed in Material Medica and Shennong Ben Cao Jing as an important and safe medicine. Over 500 compounds have been identified in licorice root including those of the triterpene saponin group like GC and two types of flavonoid including isoflabonoid (Figure 2). GC and Liq are two major components in licorice that have wellknown pharmacological activities [2]. Quality control of licorice root is needed to assure uniformity in the concentrations of these compounds, which can differ according to licorice species, growth place, and harvest season, and so on. To this end, we previously prepared MAbs against GC [4] and Liq [16] and developed an eastern blotting system for detection of GC and Liq and their aglycones (glycyrrhetinic acid and liquiritigenin, respectively) [17] in order to make evident the resource of licorice for further researches. In this method, crude licorice extract and/or traditional Chinese medicine extract are developed on a Thin Layer Chromatography (TLC) plate and transferred to a membrane by heating (Figure 3). The membrane is treated with sodium periodide, yielding an aldehyde group that can be conjugated with a carrier protein that is then bound to the membrane. GC and Liq on the membrane can be detected by labeling with anti-GC and anti-Liq MAbs (Figure 3B). However, two aglycones cannot be labeled simultaneously by eastern blotting (Figure 3B) because unlike TLC (Figure 3A), there are no sugar moieties that can be conjugated to the membrane. This method ensures quality control of licorice root sources by analysis of the two major components. 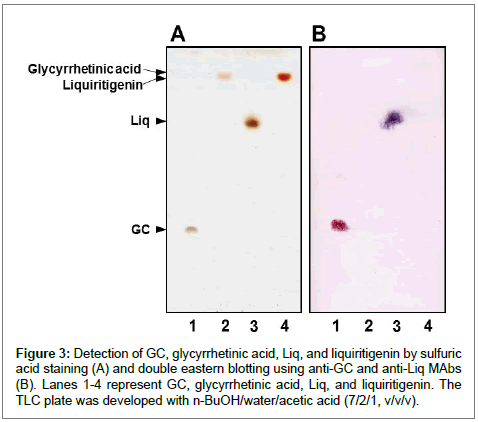 The capacity for fertilization of sperm from wild-type C57BL/6 mice was high using standard (e.g., HTF) medium supplemented with bovine serum albumin for IVF or with polyvinyl alcohol (PVA) plus methyl β-cyclodextrin (MBCD). When the sperm of aged BALB/cA mice (>48 weeks of age) was used [18], IVF efficiency was low, with fertilization capacity varying between mice. However, the fertilization rate for HTF medium containing PVA plus MBCD and licorice extract (0.12 mg/ml) was between 15.6% and 84.0% as compared to 0.0% using medium containing 0.25% DMSO. The optimal concentration of licorice extract in HTF medium was 0.3 mg/ml.

Although ingesting an excess of GC can cause steroid hormone-like activity and an allergic reaction to licorice, it is generally safe and widely used as a sweetener. There are no reports of licorice increasing pregnancy rates [19]; however, licorice extract improved the fertilization capacity of BALB/cA mouse sperm in vitro and fertilized eggs developed normally. In rats, licorice extract increased cyclophosphamide teratogenicity and upregulated the mRNA expression of cytochrome P-450 2B [20], suggesting that licorice root contains multiple components with biological activity that may not necessarily affect gene expression, given that transcription rates are low in spermatozoa [21].

The presence of GC alone in the medium did not improve fertilization rates, implying that other substances are involved. Licorice extracts preserved sperm mobility without inducing the acrosome reaction in sperm. Hence, it is expected that distinct signals are responsible for the acrosome reaction and sperm motility. Some transgenic mouse lines show very poor IVF efficiency [22]; as such, it would be useful to improve IVF culture medium by including factors that can enhance fertilization rates. While the results described above in mice are promising, it remains to be determined whether licorice root extract can improve IVF rates in other animals, including humans.

Identification of Active Compounds for IVF

An air-dried sample of G. uralensis root was sliced and then extracted with hot distilled water under sonication. The combined extracts were filtered and concentrated under reduced pressure, and the obtained residue was lyophilized to produce a crude aqueous licorice extract that was resuspended in water and then successively partitioned with EtOAc and n-BuOH. Each fraction was evaporated under reduced pressure, leaving only residues. The EtOAc fraction showed the strongest activity, as evidenced by fertilization rates (Figure 4). 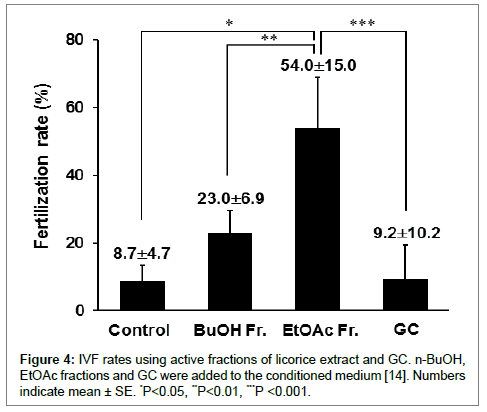 Compound 1 was a yellow powder that showed an ion peak at m/z 257 [M+H]+ and strong yellow fluorescence, suggesting a chalcone derivative; this was confirmed by 13C Nuclear Magnetic Resonance (NMR). By 1-dimensional (1D; 1H and 13C) and 2D correlation spectroscopy (COSY) and heteronuclear multiple quantum coherence (HMQC) and Heteronuclear Multiple-Bond Coherence (HMBC) spectroscopy, it was determined that compound 1 was isoliquiritigenin [23].

Compound 2 was a pale yellow powder that showed an ion peak at m/z 268 [M+H]+; its mass fragment pattern suggested a flavonoid compound with a methoxyl group. 13C NMR revealed a typical lowershifted C-3 carbon, suggesting that compound 2 was an isoflavone; 1D (1H and 13C) and 2D (COSY, HMQC, and HMBC) spectra confirmed that compound 2 was formononetin [24] (Figure 5).

Figure 5: Chemical structures of isoliquiritingenin and formononetin, as determined by COSY and HMBC. Arrows with broken lines represent the movement of electrons.

Activity of Isoliquiritingenin and Formononetin 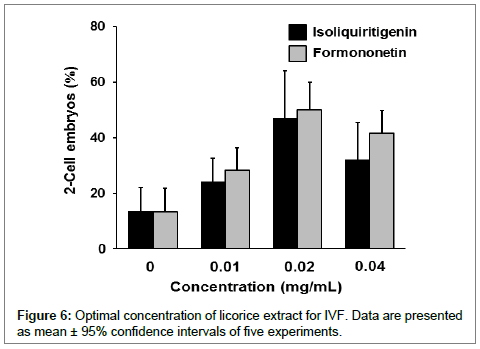 We examined the viability of embryos treated with isoliquiritigenin or formononetin and found that the embryos were morphologically normal (Figure 7), consistent with previous observations using licorice crude extract [14].

Figure 7: Blastocysts incubated with licorice extract. Embryos treated with isoliquiritigenin (A) or formononetin (B) did not show morphological abnormalities [15], consistent with observations using licorice crude extract [14].

Artificial insemination is widely used in livestock breading and for fertility treatment in humans, while genetically modified mice have been generated to evaluate gene function in vivo. Given their importance as research materials, an effective method for preserving various transgenic mice is needed, especially given the low efficiency of IVF in some lines. We previously showed that fertilization rate was improved using aqueous licorice extract in BALB/c mice, which have a low fertilization rate. The licorice extracts stimulated fertilization without inducing a spontaneous acrosome reaction in the sperm or causing developmental defects.

The signals that contribute to the maturation of ejaculated sperm remain largely unknown. Estrogen was reported to modulate sperm activation and the acrosome reaction [25]. We identified two active components, formononetin and isoliquiritigenin, in licorice root that promote IVF [15]. A study of three licorice species (G. uralensis, G. glabra, and G. inflata) found that isoliquiritigenin had strong estrogen like activity, suggesting that it is cyclized to liquiritigenin, an active flavonoid, under physiological conditions [26]. We also found that the hydrolysis of diarylheptanoid glycoside to free diarylheptanoid in culture medium has anti-trypanosomal and apoptotic activities [27], suggesting that isoliquiritigenin is a liquiritigenin precursor. In fact the biosynthetic pathway between isoliquiritigenin to formononetin via liquiritigenin starting from cinnamic acid was confirmed using microorgainisms and G. echinata cell-free system, respectively as shown in Figure 8 [28,29]. 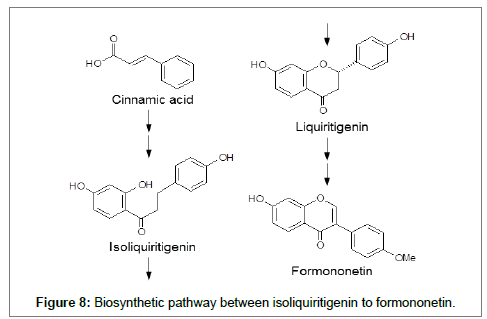 Hormononetin, an isoflavone are implicated in various aspects of sexual development, including pubertal timing, estrous cycling, and ovarian, hypothalamus, and pituitary functions [30]. Since many flavonoids including isoflavone are biosynthesized on the above pathway, it is supposed that other active flavonoid may be able to be found out. Although the relationship between estrogen and fertilization is not entirely clear, the two phytoestrogens described here may promote fertilization. It is also possible that some of the 500 components of licorice act synergistically to stimulate fertilization.

We recently developed a MAb that can be used to purify additional active components from isoliquiritigenin and formononetin knockout extracts [31]. In addition to the various reported functions of isoliquiritigenin-including anti-inflammatory, immunoregulatory, antimicrobial, antioxidant, anticancer, hepatoprotective, and cardioprotective activities [32] both isoliquiritigenin and formononetin have been shown to modulate sperm during fertilization. Clarifying the molecular mechanisms underlying the effects of these compounds on sperm can provide a basis for improving current IVF practices.

Copyright: © 2016 Tung NH, et al. This is an open-access article distributed under the terms of the Creative Commons Attribution License, which permits unrestricted use, distribution, and reproduction in any medium, provided the original author and source are credited. 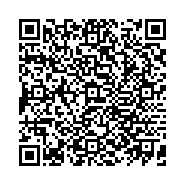