The cracked bark of Anacardium occidentale were dried under ambient conditions, chopped into bits and the ethanolic extract of the cracked bark was obtained by cold extraction. Phytochemical screening was conducted to identify the types of secondary metabolites present using standard procedures. The profiles of the chemical constituents present were established using Thin Layer and Column Chromatography methods. Thus, pure chemical constituents were isolated from the cracked bark of Anacardium occidentale. The isolated compounds were characterized using FT-IR and their structures determined using data obtained from GC-MS spectrum.

Cashew (Anacardium occidentale) is a tree that grows up to 15 m in height with thick tortuous trunk and woody branches. It belongs to the family anacardiaceae, native to Brazil and it is distributed throughout tropical countries such as Nigeria, Kenya, Tanzania, Mozambique [1,2]. Anacardium occidentale is commonly called cashew in English and in the major Nigerian languages: Hausa, Ibo and Yoruba, it is called ‘Kashu’, ‘Okpokpo’ and ‘Kaju’ respectively. The cashew tree produces many products. The bark, leaves and shell oil of A. occidentale have important medicinal values and industrial applications in the plastic and resin industries based on its phenol content. The nut has international appeal and high market value as a food source, especially in the beverage industry [3].

A. occidentale is a multipurpose tree whose leaves, stems and bark extracts have been used extensively for the treatment of diarrhea, dysentery and colonic pain [4]. There are reports that it possesses antidiabetic, anti-inflammatory, antimicrobial and analgesic properties [4,5]. The antimicrobial activity of ethanolic extract of A. occidentale leaves was attributed to 2-hydroxy-6-pentadecylbenzoic acid [1] and other compounds such as tatrols and tannins which are some of the chemical constituents identified in the ethanolic extract [6].

Several studies have been carried out to isolate natural products from various parts of A. occcidentale. 2-hydroxy-6-pentadecylbenzoic acid [1] and 2,6-dihydroxybenzoic acid [2] have been isolated from the cashew apple (ref. [8]). Other compounds isolated include myricetin [3], quercetin [4], kaempferol [5], rhamnetin [6] (ref. [9]), cyaniding [7], peonidin [8] and delphinidin [9] were also isolated [2]. 2-hydroxy- 6-pentadecylbenzoic acid [1], cardanol [10] and salicyclic acid [11] were isolated from the hydro-ethanolic extract of A. occidentale nuts [10]. 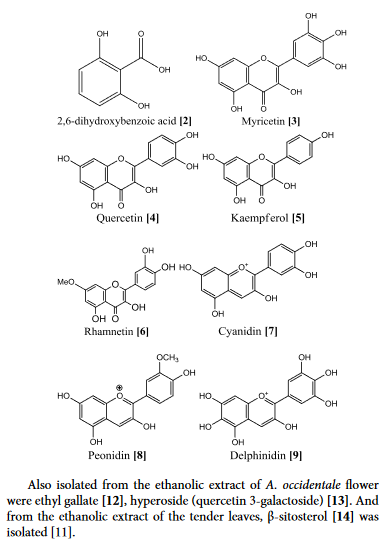 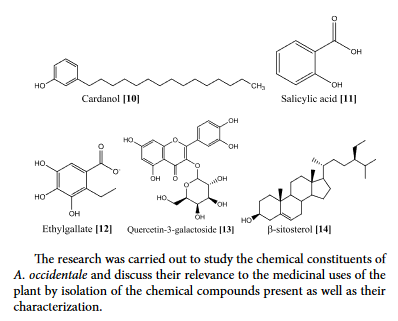 The research was carried out to study the chemical constituents of A. occidentale and discuss their relevance to the medicinal uses of the plant by isolation of the chemical compounds present as well as their characterization.

Collection and identification of plant materials

The cracked stem bark was pulverized and dried under ambient conditions. 600 grams of the plant material was extracted with ethanol for 72 hours and the resultant crude extract obtained was filtered. The crude extract was concentrated under reduced pressure using a rotary evaporator to obtain a solvent-free ethanol extract.

The crude extracts were fractionated using Si-gel column chromatography. n-hexane and dichloromethane were used as eluents (Eluent ratio; n-hexane/DCM 4:1 to n-hexane/DCM 1:3). Fractions obtained were collected in 50 mL flasks. Identical fractions were pooled based on their TLC profiles thus resulting in 5 combined fractions. Further purification using preparative thin layer chromatography was carried out on fractions that were impure.

Self-coated preparative thin layer chromatography plates were used to isolate and purify the chemical components. The plates were coated with slurry of silica gel mixed with appropriate amount of binder (calcium sulphate) and activated at 103°C for 15 min in a drying oven.

The infrared spectroscopic analyses of the isolates were carried out so as to know the different functional groups present in the isolated compounds. The infrared spectra were recorded on Shimadzu 8400 s (Schimadzu Corporation, Kyoto Japan) Fourier Transform-Infrared (FT-IR) Spectrophotometry using KBr pellet.

The ethanolic extract of Anacardium occidentale cracked bark showed various phytochemicals like phenolics, flavonoids, triterpenoids and saponins. Alkaloids and saponins were not detected. This agrees with the results of Fazali et al. [13].

A total of seventy-one fractions were collected from the column chromatography fractionation of the cracked bark crude extract (Sigel). Combined fractions 29-39 was purified using PTLC.

From the IR spectra of the isolated compounds, the bands observed are summarized in Table 1. Three main peaks were highlighted in the GC-MS (Table 2). The 3 major peaks correspond to three different compounds including fatty acids and fatty acid esters. These peaks according to NIST Library matching are cyclohexane carboxylic acid, decyl ester (51.19%, RT=53.434) and n-hexadecanoic acid (34.22%, RT=45.847), all constituting 87.65% of the total.

The 17-octadecynoic acid though not a major component of the isolate, has been reported to possess antihypertensive properties [17].

A unique and major component of the isolate proposed by the NIST library of the GC-MS is cyclohexanecarboxylic acid, decyl ester (MF 268). However from the mass spectra (Figure 3), the molecular formula of the matched compound is 281 while its base peak is m/z 129 which is different from the proposed compound with a base peak of m/z 57 characteristic of cyclic alcohols. The reason for this could be due to the possible presence of a substituent on the cyclohexane ring which may have been earlier fragmented. The proposed structure for this compound (100) and its fragmentation pattern are given in Figure 4. 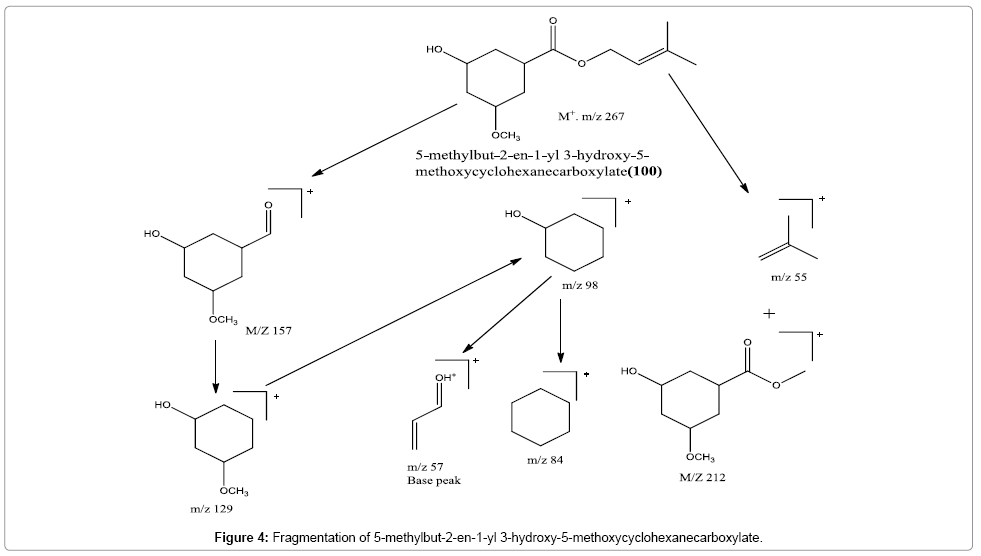 Five compounds were observed in the GC-MS as indicated in Table 3. The MS spectra data in Table 3 showed 5 peaks corresponding to five different compounds. This infers the isolate is a mixture of compounds. The compounds present include 2-trifluoroacetoxydodecane (22.76%, RT=43.032), oleic acid (18.21%, RT=48.199), 1-cyclohexylnonene (7.03%, RT=48.365), octadecanoic acid, 2,3-dihydroxypropyl ester (45.06%, RT=49.052) and 3-[(trimethylsilyl)oxy]-17-[o- (phenylmethyl)oxime]-(3α,5α)-androstane-11,17-dione (7.0%, RT=53.560). 2-trifluoroacetoxydodecane and Octadecanoic acid, 2, 3-dihydroxypropyl ester are the major compounds present as they constitute 67.82% of the total. 2-trifluoroacetoxydodecane, one of the major constituents has been reported to possess antitumor activity against murine mammary adenocarcinoma [18]. Octadecanoic acid, 2, 3-dihydroxypropyl ester also one of the main components of the isolate, has been reported to possess therapeutic activities which include antioxidant, hepatoprotective, antihistaminic, hypocholesterolemic and antieczemic activities. Its antioxidant activity is possibly evident in the reported antioxidant property of the fatty acid octacosanoic acid [19].

A unique constituent of this isolate is the androstane steroid 3-[(trimethylsilyl) oxy]-17-[o-(phenylmethyl) oxime]-(3α,5α)- androstane-11,17-dione. Although it is not a major constituent of the isolate, it is significant because no androstane steroid has been reported to be isolated from any part of Anacardium occidentale as at the time of this report. Furthermore, the structure proposed by the NIST library has been modified due to the low percentage matching between its mass spectra and the compound’s mass spectra. The base peak of the library suggestion is m/z 91 (MF=381) while that of the matched compound is m/z 207 (MF=341), hence the need to modify the structure to obtain a compound whose spectra matches that obtained from the GC-MS (Figure 5). The structure and fragmentation pattern of the modified androstane steroid proposed are shown in Figure 6. It is a hydroxylimine steroid. It is noteworthy that androstane steroids have been reported to have potentials in: alleviating stress, anxiety, mood disorders, seizures, depression; treatment of drug and alcohol abuse, memory, premenstrual disorders, and neural system damage [20].

The cracked bark of A. occidentale was found to contain of fatty acid esters, the notable one being 5-methylbut-2-en-1-yl 3-hydroxy- 5-methoxy cyclohexane carboxylate. Also noteworthy is a unique new and androstane steroid derivative being reported for the first time in Anacardium occidentale. These are compounds which could serve as new lead compounds with promising biological activities.

Copyright: © 2015 Fadeyi OE, et al. This is an open-access article distributed under the terms of the Creative Commons Attribution License, which permits unrestricted use, distribution, and reproduction in any medium, provided the original author and source are credited. 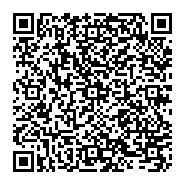