Isolation, Characterization and Derivatization of Some Bioactive Components in Moringa Oleifera Leaves

Moringa Oleifera is an important multipurpose tropical tree not yet fully investigated for its medicinal and therapeutic properties which informed the objective for this research work. The M. Oleifera n-hexane leaves extract yielded a solid substance that was re-crystallized several times to obtain a relatively pure compound which was subsequently derivatized. The FTIR data of the solid substance indicated that the substance is an aliphatic alcohol. Consequently, it was derivatized to an ester, an aldehyde and a carboxylic acid.

Moringa oleifera is a member of Moringaceae family which grows throughout the tropics. It is native to sub-Himalayan tribes of North West India, Pakistan, Bangladesh and Afghanistan, but now distributed worldwide in the tropics and found in many countries of Africa and South America. It was well known to the ancient world, but recently has been “rediscovered” as a multipurpose tree with tremendous variety of potential uses. The leaves, flowers, fruits and roots of Moringa are used as vegetables; the seeds for water purification, and the oil extracted is used for cooking, soap manufacture, as a cosmetic base and to provide illumination [1]. Other uses include cattle fodder, biogas production, and all plant organs are used as constituent in traditional medicine [2]. In Africa the cooked leaves of Moringa are eaten as principal ingredients of sauce, but in Northern Nigeria the leaves are used as vegetable in soup preparation, while the root poultice is used to treat inflammation especially swelling tissue or oedema [1,3].

Collection and identification of plant materials

Fresh leaves of Moringa oleifera were collected from Gaa-Akanbi area in Ilorin Kwara State, Nigeria. The plant samples were identified as Moringa oleifera leaves and documented in the herbarium at the Department of Plant Biology, University of Ilorin, Nigeria.

Thin layer chromatography analyses of the crude extract of the leaves of M. oleifera were carried out. The solvent system used for development was DCM/diethyl ether/n-hexane (1:1:1). After development, the TLC plates were allowed to dry and viewed under the UV-lamp at 254 and 366 nm.

In order to obtain pure isolates, the crude extracts were fractionated using Column Chromatography (CC). The precipitated substance from the major fraction was re-crystallized several times so as to obtain a relatively pure compound which was then derivatized.

The following reagents were used to derivatize the isolate;

· Cinnamic acid and salicylic acid were used to esterify the isolate.

Esterification using salicylic acid: 0.255 g of salicylic acid and 0.258 g of the relatively pure compound were weighed into a boiling tube and then inserted in a sand bath, the esterification reaction was carried out using melt method at 260°C for 10 minutes.

Esterification using cinnamic acid: 0.670 g of cinnamic acid and 0.67 g of the relatively pure compound were weighed into a boiling tube and then inserted in a sand bath, the esterification reaction was carried out using melt method at 260°C for 10 minutes.

Column chromatography of the crude extract

The components of the n-hexane crude extract were isolated using glass column packed with silica gel; n-hexane and dichloromethane were used as eluents. Thirty-five fractions were obtained and collected in 50 ml flasks after which identical fractions were pooled into 10 combined fractions.

Derivatization of the crystalline substance

From the IR spectra of the isolated compounds, the bands observed are summarized in the Table 1.

Table 1: Characteristic FTIR of the Isolates and the Derivatized Compounds.

FTIR of Moringa extract powder: The main IR absorption peaks are O-H stretching that appeared at 3412.0 cm-1, aliphatic C-H stretching frequencies at 2945.00 cm-1 and 2855.0 cm-1. The peaks at 1474.00 cm-1 and 1454.0 cm-1 indicates the C-H bending. Therefore, the presence of only aliphatic C-Hs and alcohol O-H could be deduced to suggest the presence of a saturated aliphatic alcohol with a long alkyl chain.

Figure 2: Hypothetical structure proposed for OF.

GC-MS analyses of two reaction products were carried out. The GC-MS data of the products are presented in the Table 2.

The GC-MS Spectrum of the oxidized product (OSR) above showed that the product is a mixture of two acids and an ester, it can be seen from the Table 2 that the two acids make up 66.38% of the total composition while that of the ester is 33.62% of the total constituents. Therefore, it can be concluded that the Moringa extract powder was successfully oxidized to an acid as suggested by FTIR spectral data.

9-Octadecenoic acid (z)-, 2-hydroxy-1-(hydroxymethyl)ethyl ester though not a major component of the oxidized product, has been reported to inhibit the proliferative effect in keloid fibroblasts [4] and (z,z)-9,12-octadecadienoic acid also known as linoleic acid can be used to show the antioxidant effect of natural phenols [5].

n-hexadecanoic acid which happens to be the major constituent proposed by the NIST library for the oxidized product has been reported in literature to be probably responsible for the yellow colour of many plants [6], and also reported to be among the fatty acids which possess antibacterial and antifungal activity [7,8]. The mass spectral data for this compound confirms its molecular mass as 256 and the base peak as 73. Therefore, the structure for this compound (59) and its fragmentation pattern are given in the Scheme 1. 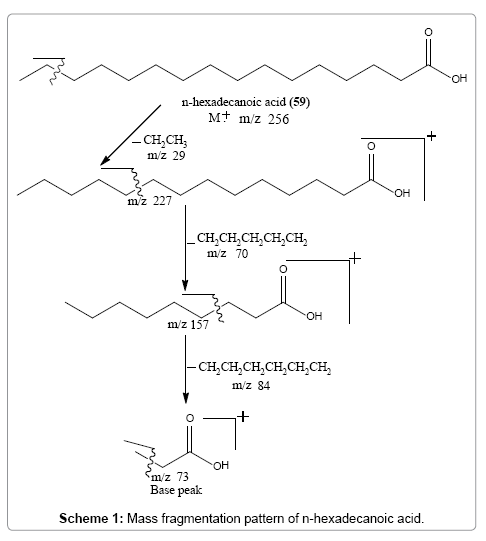 From Table 3 GC-MS spectral data for CMP, only one peak was observed which implies that it is a pure reaction product. The structure proposed by the NIST library has been modified due to the disparity in the matching of its mass spectra and the compound’s mass spectra. The molecular mass of the NIST library suggestion is 147 while that of the matched compound is 207; hence the need to modify the structure to obtain a compound whose spectra matches to a large extent that obtained from the GC-MS.

The name of the new proposed structure is ethyl-pmethoxycinnamate (60) which is an ester, and this showed that the esterification reaction was successful. Ethyl-p-methoxycinnamate (60) has been reported in literature to have larvicidal activity against A. aegypti, O. togoi and C. pipens pallens [9].

The proposed structure for this compound (60) and its fragmentation pattern are given in the Scheme 2. 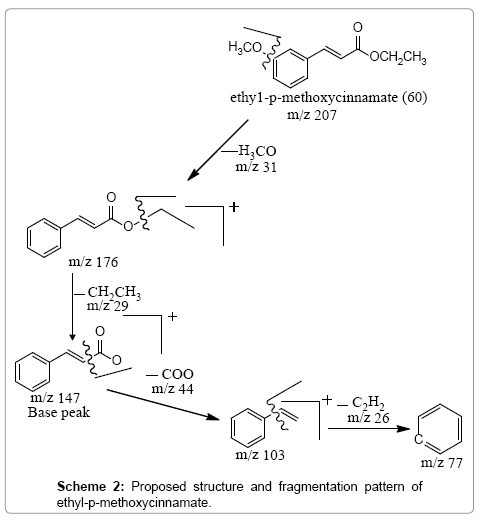 In this research work, a crystalline substance was isolated from n-hexane extract of pulverized Moringa leaves. The exact structure of this compound is yet to be ascertained. The spectral data available suggest an aliphatic fatty alcohol and this formed the basis for the derivatization of the compound to an ester, aldehyde and carboxylic acid.

Copyright: © 2015 Ogundele VA, et al. This is an open-access article distributed under the terms of the Creative Commons Attribution License, which permits unrestricted use, distribution, and reproduction in any medium, provided the original author and source are credited. 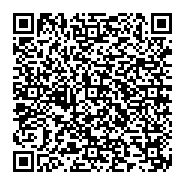