The calyx of green Hibiscus sabdariffa is used in Nigeria to prepare soup, stew and sauces as distinct from the red variety which is used to produce a popular local drink known as sobo due to their health benefits. This work therefore aims to identify some of the chemical constituents of the green variety which has been scarcely investigated. Hexadecanoic acid methyl ester and 1,1, 2-ethanetricarboxylic acid-1-hydroxy-1,1-dimethyl ester were isolated from the methanol extract of the calyx of the green Hibiscus sabdariffa using chromatographic methods, including Flash column chromatography and preparative thin layer chromatography. They were characterized using spectroscopic analysis and gas chromatography-mass spectral (GC-MS) analysis. This is the first report of the presence of hexadecanoic acid methyl ester and 1,1, 2-ethanetricarboxylic acid-1-hydroxy-1,1-dimethyl ester in the calyx of the green variety of this plant. These compounds are probably associated with the antimicrobial and other bioactivities previously reported for the plant.

Hibiscus sabdariffa Linn is a shrub belonging to the family – Malvaceae. It is a popular vegetable in Indonesia, India, West Africa and many tropical regions [1]. The plant is widely grown in tropics like Caribbean, Central America, India, Africa, Brazil, Australia, Hawaii, Florida and Philippines as a home garden crop. The name “sabdariffa” originated from the Philippine Islands [2]. In addition to Roselle in English-speaking regions, it is called Rozelle, Sorrel, Green sorrel, Jamaica sorrel, Indian sorrel, Guinea sorrel, Sour-sour, Queensland jelly plant, Jelly okra, lemon bush and Florida cranberry. In Nigeria, two botanical varieties are recognized; the calyces of the red variety are used for the preparation of sobo drink, while the calyces of the green variety are used to cook soup, stew and sauces. In Nigerian languages it is called Yakwua (Hausa) which refers to the whole plant, Amukan (Yoruba) and Okworo ozo (Ibo) [3]. The vegetable is also widely grown in the North-Eastern, Western and Middle Belt regions of Nigeria [4]. The calyx of green roselle is very rich in vitamin C and riboflavin with some major minerals present [5]. Roselle calyces are used as a digestive and purgative agent and a folk remedy for abscesses, bilious conditions, cough, dysuria, scurvy, stangury, cancer and hypertension [6]. Ethnobotanical survey revealed that a decoction of the leaves of the green roselle is used to treat bleeding gum in children, improve appetite of malnourished children and to increase breast milk in lactating mothers. The lipid content of the fermentation product of the seed of H. sabdariffa has been investigated, but the actual fatty acids were not indicated [7]. Also, the fatty acid composition, and the antiinflammatory and analgesic activities of the seeds have previously been studied [8]. We now wish to report the isolation and characterization of hexadecanoic acid methyl ester and 1,1,2-ethanetricarboxylic acid- 1- hydroxyl-1,1-dimethyl ester from the calyx of the green variety. This is the first report of these compounds from the calyx of the green variety of H. sabdariffa.

The calyces of Hibiscus sabdariffa Linn (Green Roselle) were harvested from Omegede Otutubatu, Omala Local Government Area in Kogi State in the plain farmlands during the dry season on 25th November, 2005. The plant was identified at the National Institute for Pharmaceutical Research and Development (NIPRD), Idu-Abuja. A voucher specimen, number NIPRD/H/6150, was deposited at the Institute’s herbarium for future reference. The collected plant materials were checked for foreign matters, which were removed. The calyces were thereafter air-dried in a shade for two weeks. The dried calyces were pulverized in a mortar using a pestle and kept in an air tight cellophane bag and preserved in the dark until required.

Analytical grade organic solvents including hexane, ethyl acetate, methanol, acetone (Sigma-Aldrich) were used in this study for extraction and chromatographic purifications. However, solvents or reagents used in highly sensitive equipment like NMR and GC-MS were as specified by the equipment’s manufacturers. Melting points (mp) were determined with a Barntead Electrothermal BI 9100 melting point apparatus. 1H NMR and 13C NMR spectra were run on a Bruker AV 300(400 MHz) and 500 (500 MHz) spectrometers using CDCl3 and DMSO-d6 as solvents, and tetramethylsilane (TMS) as internal standard, at the University of Strathclyde Glasgow, and values were expressed in parts per million (δ). On the other hand, both 1H (400 MHz) and 13C (100 MHz) spectral data were recorded in deuterated CDCl3, DMSO-d6, D2O or CD3OD, on a Bruker AMX400 at Acorn NMR Inc, Carlifonia, USA and Columbia University, USA. NMR spectrometer chemical shifts were also expressed in ppm relative to TMS and the coupling constants (J) were given in Hz. Standard pulse sequences were employed for the measurement of 2D NMR spectrum (1H-1H COSY). The IR spectra were recorded with a Shimadzu Fourier Transformed Infra-red (FT-IR) spectrometer model 8400S at National Research Institute for Chemical Technology (NARICT) Zaria, Kaduna State, Nigeria. The values are in wavenumber (cm-1). The GC-MS was done at Sheda Science and Technology Complex (SHESTCO), Kwali, Abuja, Nigeria. The flow rate was 1 ml/min and column temperature was 250°C. Open flash column chromatography was performed using silica gel Merck 0.063-0.200 mm mesh, 60G, for the fractionation of extracts. TLC analysis of extracts, fractions and compounds were carried out using silica 60 F254 precoated glass baked plates (0.25 mm, 20 × 20 cm; Merck Darmstadt, Germany). Spots were detected on TLC plates under short (λ=254 nm) and long (λ=366 nm) UV light as well as visualized by spraying with 2% (w/v) vanillin in sulphuric acid and in iodine vapour.

The pulverized dried calyces of green Hibiscus sabdariffa (5.0 kg) were macerated successively in n-hexane, ethyl acetate and methanol for 24 hours each at room temperature (25°C) according to standard procedures [9]. The extracts were filtered and the filtrates were concentrated under reduced pressure using a rotary evaporator at 46°C to give the crude extracts. The crude extracts were kept in sealed containers in the dark until required. The methanol extract (10 g) was fractionated using Flash column chromatography on silica gel (75 g) using mixtures of hexane and ethyl acetate. A viscous yellow oil GAA4 (330 mg; Rf = 0.77, 3:2 hexane/ethyl acetate) was obtained with 60% hexane in ethyl acetate. Further elution with 20% hexane in ethylacetate gave a precipitate. It was re-dissolved in ethylacetate over warm bath and allowed to stand for 18 hours to give a white precipitate, GAA2 (314 mg, Rf value = 0.35, 3:2 hexane-ethylacetate) and was recrystallized from ethyl acetate as white crystals (m.p., 127.0-127.4°C). The two isolates were then subjected to spectroscopic and GC-MS analyses.

The black creamy sticky solid methanol extract of the calyx of green Hibiscus sabdariffa was subjected to column chromatography to give the yellow oil, GAA4, and the white crystalline solid, GAA2. The gas chromatogram of GAA4, Figure 1, showed a prominent peak with a retention time of 12.19 minutes indicating that compound GAA4 was relatively pure. The 1H NMR spectrum allowed for a quick identification of GAA4 as a fatty acid ester based on a collection of signals between 2.5 and 0.87 ppm suggesting the presence of methyl and methylene groups (Table 1). A very important signal at 3.64(3H) was suggestive of the presence of the methoxy group of a methyl ester. In 13C NMR spectrum, 16 carbon signals were observed, including the ester carbonyl carbon signal at 174.62, which was also suggestive of a carboxylic acid ester (Table 1). In addition, the MS spectrum (Figure 2) showed the [M+H]+ ion at m/z 271 as well as the following fragment ions: 227, 143, 87 and 74(base peak) which are in agreement with literature [10]. Based on the above spectral characteristics and by direct comparison with the Standard Mass Library spectral data, compound GAA4 was assigned structure 1, hexadecanoic acid methyl ester. The IR spectrum of GAA2 showed absorptions at 3500 (broad) for carboxylic acid hydroxyl group and1650-1800 (broad) for overlapping carbonyl absorptions of carboxylic acid and ester derivative. The gas chromatogram of GAA2 (Figure 3) also displayed a very high degree of purity with a major peak at retention time 7.81 minutes. In the 1H NMR spectrum (Figure 4) resonance signals were observed at: 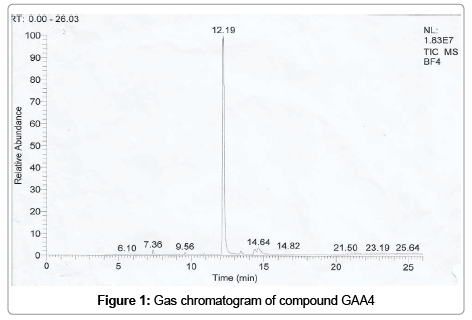 In addition, the mass spectrum (Figure 6) showed a mass ion peak at m/z 207 [M+H]+ and fragment ions at m/z 192[207 -CH3] and 144[206-2CH3O]. Based on the above spectral characteristics and 1H- 1H COSY spectral studies which confirmed the connectivities between the various protons, compound GAA2 was assigned structure 2, 1, 1, 2-ethanetricarboxylic acid-1-hydroxy-1,1-dimethyl ester (scheme 2). 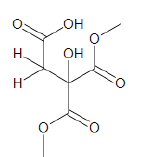 Hexadecanoic acid (palmitic acid) had previously been isolated from the seeds of both Hibiscus trionum and Hibiscus sabdariffa (red roselle) [10-12].This is perhaps the first time hexadecanoic acid methyl ester has been isolated from the calyx of Hibiscus sabdariffa (green roselle). Hexadecanoic acid methyl ester (palmitic acid methyl ester) had also been reported to cause autolysis of membranous structures, induce significant aortic dilation, inhibit phagocytic activity and nitric oxide production of certain cells, reduce levels of tumor necrosis factor-alpha (TNFα), prostaglandin E2 (PGE2), and interleukin-10 (IL-10) without affecting ATP levels [13-16]. While citric acid had previously been isolated from H. sabdariffa (red roselle) [13], this is the first report of 1,1,2-tricarboxylic acid-1-hydroxy-1,1-dimethyl ester, a related tricarboxylic acid derivative, from the genus, Hibiscus. The citrates are known to possess antifungal activity and their solutions as Tetraclean find uses as final rinse against Candida albicans in human tooth models [17].

The authors are grateful to the taxonomist, Dr. (Mrs) Jemilat Ibrahim, who identified the plant and stored a herbarium specimen and to the ethonobotanist, Mr. Muazzam Ibrahim Wudil, who gave the ethnobotanical information on the plant, both of the National Institute for Pharmaceutical Research and Development (NIPRD), Idu, Abuja, Nigeria. They are also grateful to the Institute for pharmaceutical Research and Development, Idu, Abuja, Nigeria, for a study sponsorship granted G. A. Ajoku.

Copyright: © 2015 Ajoku GA, et al. This is an open-access article distributed under    the terms of the Creative Commons Attribution License, which permits unrestricted    use, distribution, and reproduction in any medium, provided the original author and    source are credited.